I'm pretty sure that even knowledgable art fans rarely give the Socialist Realism paintings of the Soviet Union much thought, if any. And that thought probably echoes the Art Establishment dogma that Socialist Realism was simply propaganda expressed in obsolete painting styles. Nothing much to see there.

It's true that aside from personal projects, Soviet artists had to produce paintings that followed the Party line, emphasizing the benefits and glories of the Motherland under scientific socialism. I've long contended that political art is almost always inferior art, especially to the extent that the political point being made dominates the work.

As for style, the Establishment view is simply an aspect of the now-aging assertion that, aside from Renaissance-era and 17th century Dutch painting (think Rembrandt and Vermeer), pre-modernist Western painting is largely worthy of contempt, and Modernism is the destiny of artistic evolution.

I've been disagreeing with that concept on the Internet for the last 14 years, preferring paintings that are interestingly and technically well done while for the most part depicting reality with reasonable fidelity given the artist's intent and capability.

So in this and related posts I examine some Socialist Realist paintings in terms other than political messaging.

I can do this because when I was in Málaga, Spain in November I visited a branch of Saint Petersburg's excellent Russian Museum. It was holding a year-long (ending February 2019) exhibit titled "The Radiant Future: Socialist Realism in Art." A fine exhibit. Plenty of examples, some of which I knew about before I visited. Of course I took lots of snapshots.

I deal with one of his large works below. Click on images to enlarge. 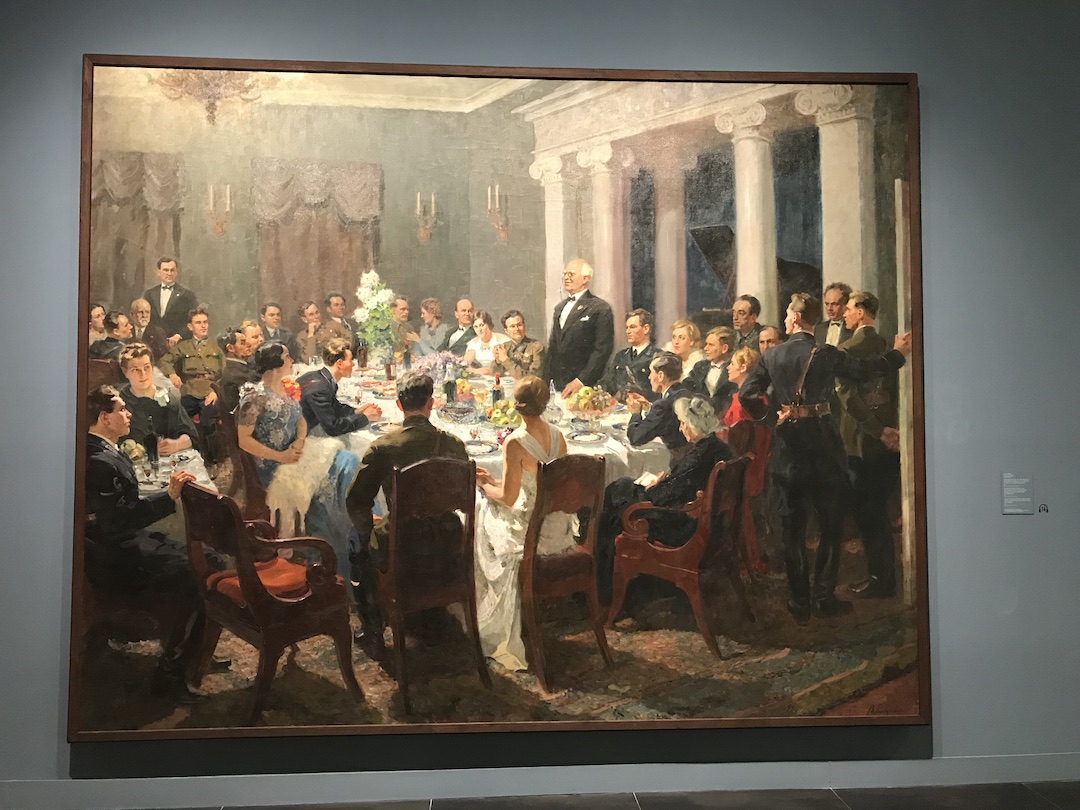 Artists of the Konstantin Stanislavsky Theatre Meeting Students of the Nikolai Zhukovsky Air Force Academy - 1938
The entire painting. You can gauge its size by reference to the plaque at the right and the museum floor: nearest subjects are depicted a little less than life-size. 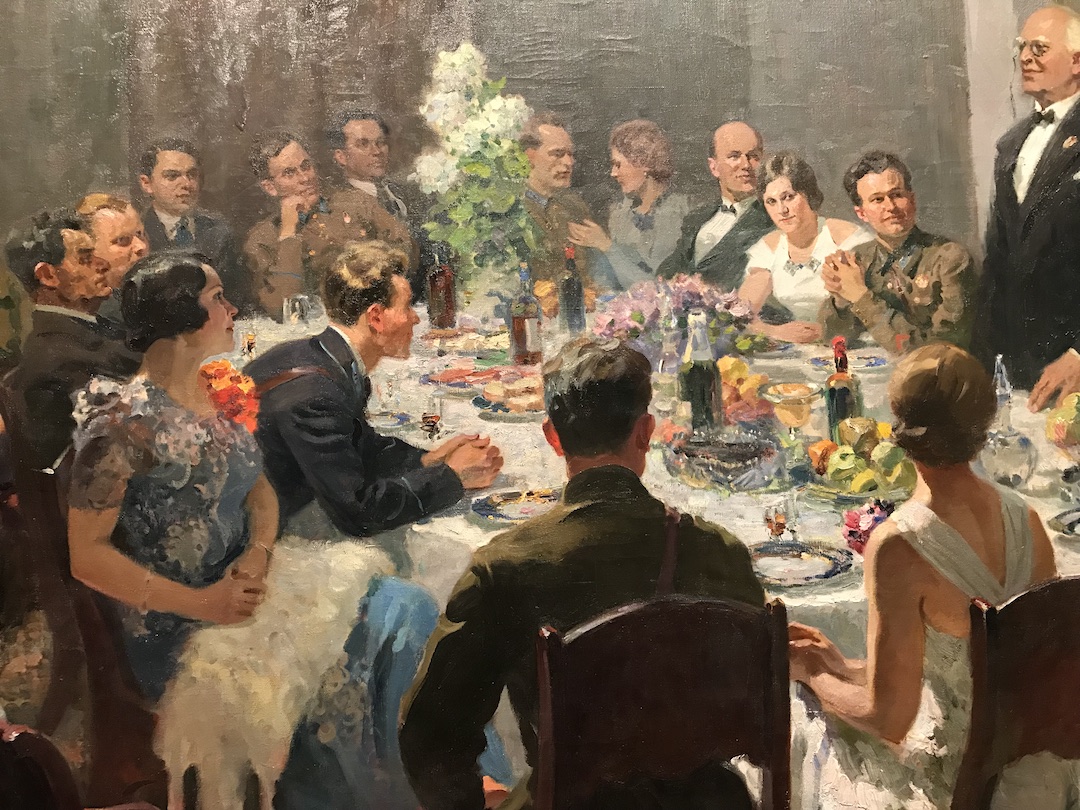 What struck me about this work was how elegantly the people are dressed. Far from stereotypical collective farmworkers nuzzling their beloved tractors. The setting might as well have been in France or England. This probably had to do with the fact that theatre artists and military cadets were privileged people under the Soviet regime, so what was depicted was probably true. Also, note that this was painted at the time of Stalin's infamous purges of potential rivals including leading army brass such as Marshal of the Soviet Union Mikhail Tukhachevsky -- perhaps the USSR's greatest early military leader. Unsettling times. What especially caught my eye (probably intentionally by Efanov) is the contra-jour view of the woman in the white dress with her back to us. In the previous image you can see that her positioning makes her the painting's focus, -- not the standing speechmaker across from her who is theoretically the focus. 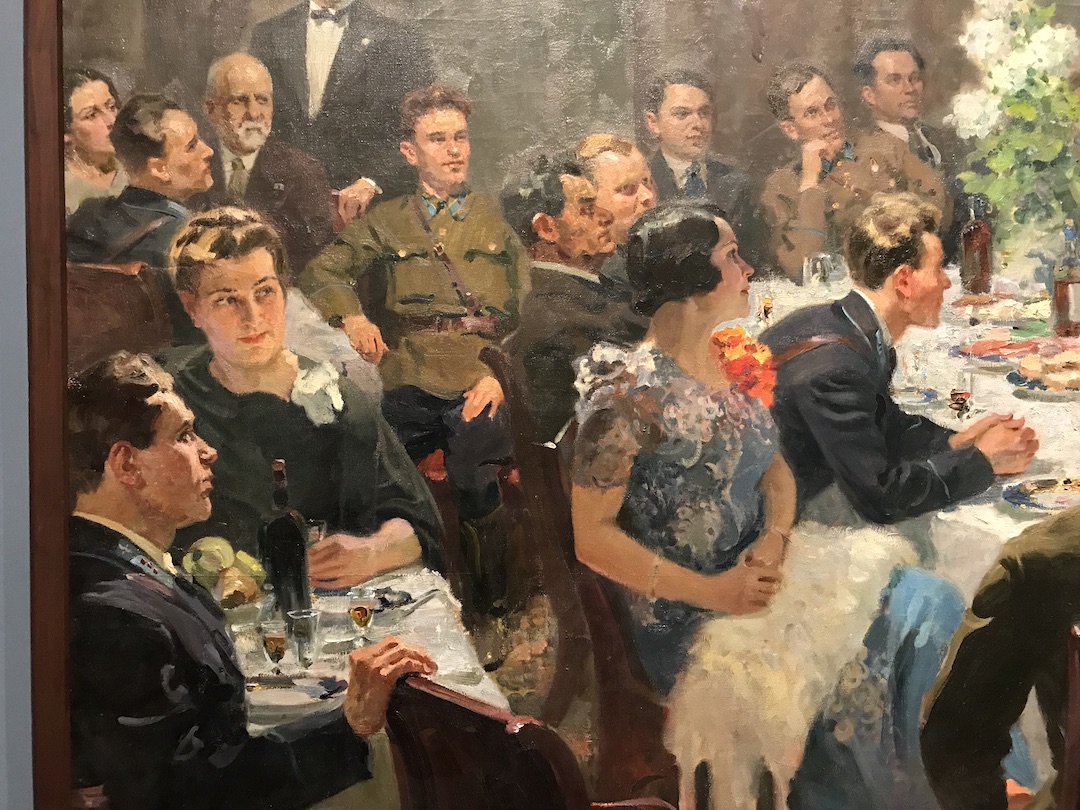 Panning farther to the left we can see how Efanov skillfully adjusts his brushwork to make background figures slightly out of focus. 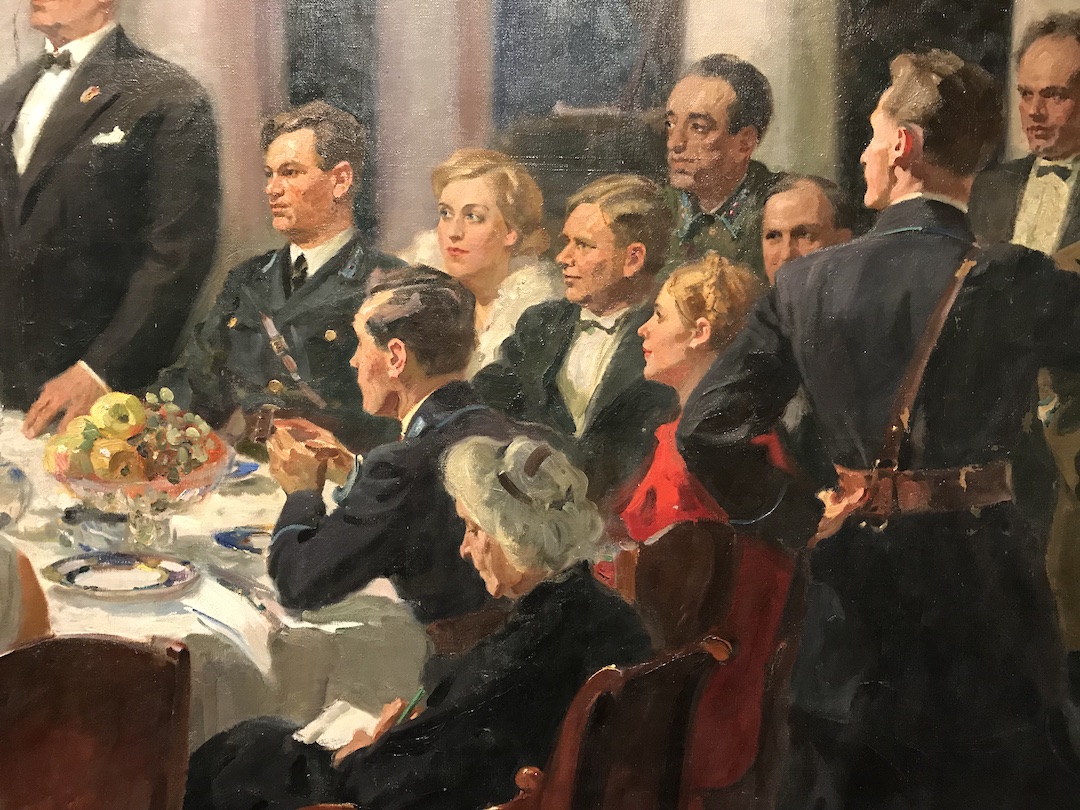 And to the right: note in all these images that he took care to paint the young women more distinctly than the surrounding men in their black ties and Sam Browne belts. Efanov was really skillful.
Posted by Donald Pittenger at 1:00 AM