Burton Silverman (1928 - ), illustrator and painter, never succumbed to Modernism.  Yet he has had a reasonably successful career despite his refusal to follow artistic/commercial fashions.  For a farily recent take regarding that and other artistic matters, I strongly urge you to link to this Art Students League interview of him.

Silverman's Wikipedia entry is here, and I, a big fan, wrote about him here.

In that interview he mentions that he does not try to maintain a consistent style.  However, he thinks this of his more recent work: "It’s evolving a bit because a lot of my painting now has got a high degree of finish, more than it had twenty years ago. It used to be more pastel-related with a lot more brushstrokes. Now it’s more hidden. So a lot of the ways that I apply paint have changed, and it takes more time. I’m not a patient nine-to-five painter."

Regaarding Cézanne: "I couldn’t respond to Cézanne’s still lifes or even his card players. His landscapes are highly-prized for qualities I just cannot discern. There is a pleasure principle in all art, OK? For me that must include something else which is incredibly important, which is what I talked about before—that human element."

Regarding Picasso: "Picasso’s vaunted skills were overrated: his early paintings were still quite ordinary and repetitious of then contemporary Spanish artists. And he systematically aped Lautrec and Edvard Munch before turning image-making on its head with Les Demoiselles d’Avignon. These are arrogant things for me to say. I’m clearly not considered an important enough critic. But think of this: there are only a couple of serious negative critiques in print among all the tons of Picasso books written since he became famous."

Regarding John Singer Sargent: "Yeah, I thought he was a bit too glib, and next to Rembrandt appeared superficial. I changed my mind. I see that he made certain elements of his painting appealing to the people he was actually dissecting. They looked only at the appurtenances. You know the dresses, the furniture, the setting to sanctify their wealth. The idea that Sargent was a premier coup painter—one touch and you’re done—absolutely wrong. You have to really look at the paintings of the features, the heads. They are very considered, and they are constructed by many layers of built-up paint. That is where their luminosity comes from. A lot of them are extremely penetrating, psychologically-attuned portraits."

I agree to all of that.
Below is a sampling of Silverman's work. 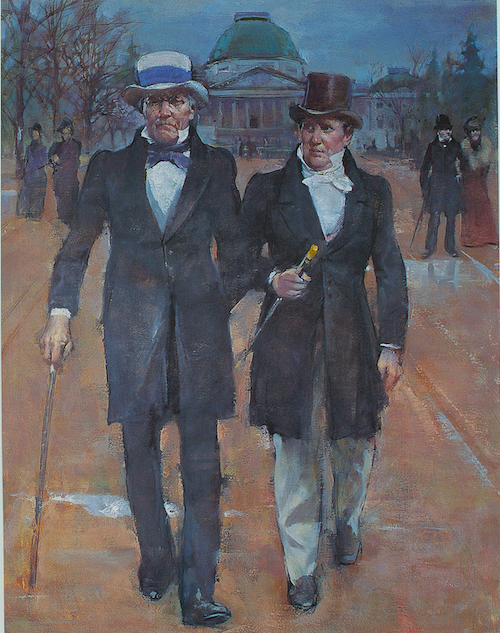 "A Short and Scary Walk with Andrew Jackson" - American Heritage Magazine - October 1992
An example of his late illustration work.  Note the thin, black lines on the sketchily painted pantlegs and elsewhere.  We will find more examples below.. 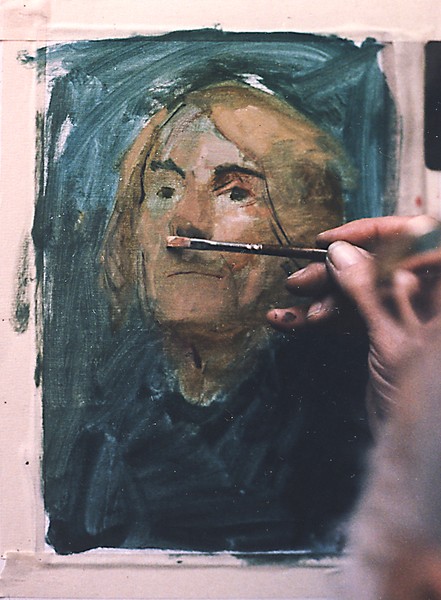 Demstration image
Silverman's thin black lines have intrigued me for years.  In this demonstration, he first blocked in the head and then added the black.  Here it seems to have mostly been applied using a thin brush.  But the very thin, regular lines were probably applied using the edge of a palette knife. 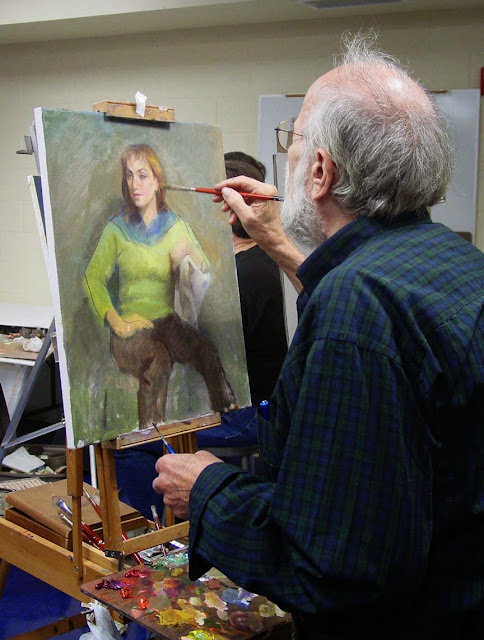 Photo of Silverman painting
Note the thin, black lines on the sleeve and hand.  He sometimes chose not to paint over all of them, though he might, in this case. 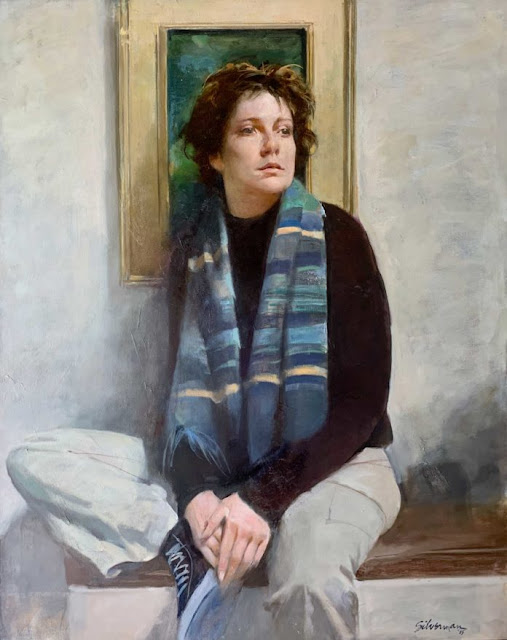 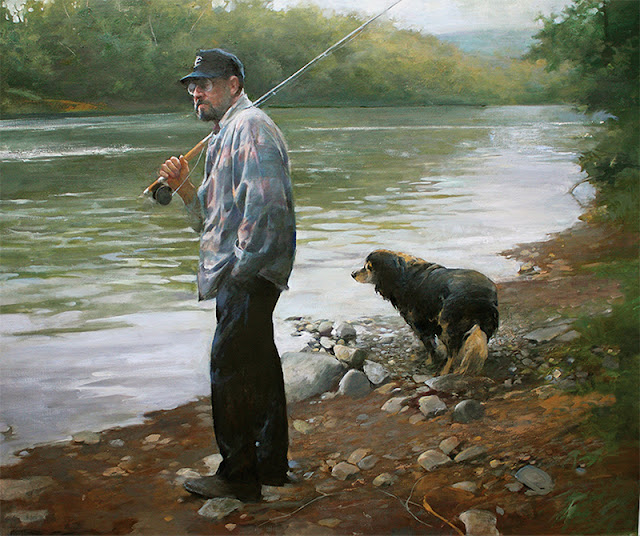 Near the Shenandoah - 2010
A fairly recent painting made when Silverman was around 80 years old.  Very "finished." 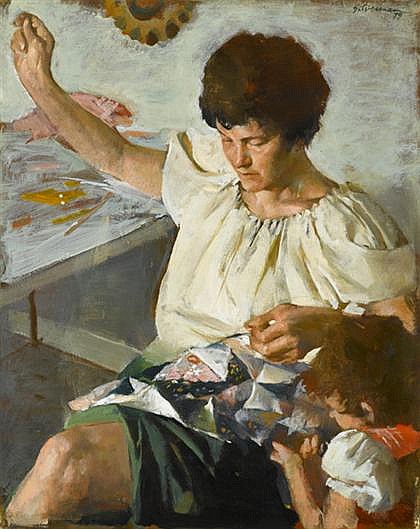 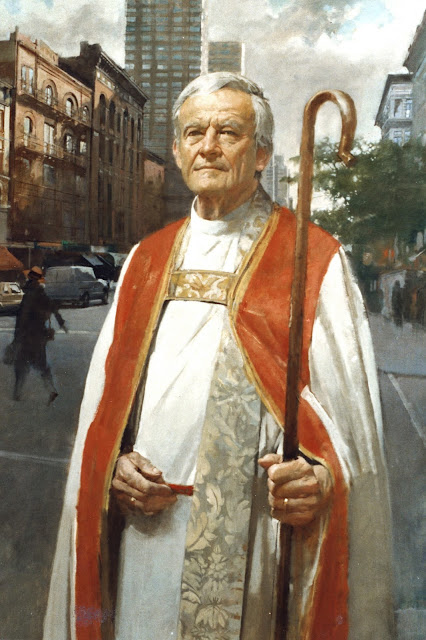 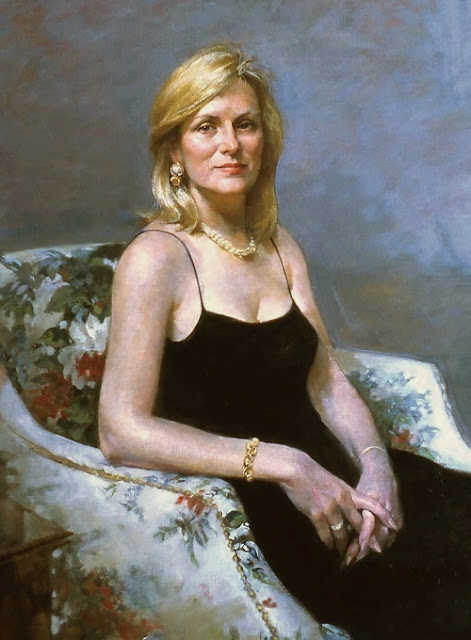 Beverly Derrick
Another one. 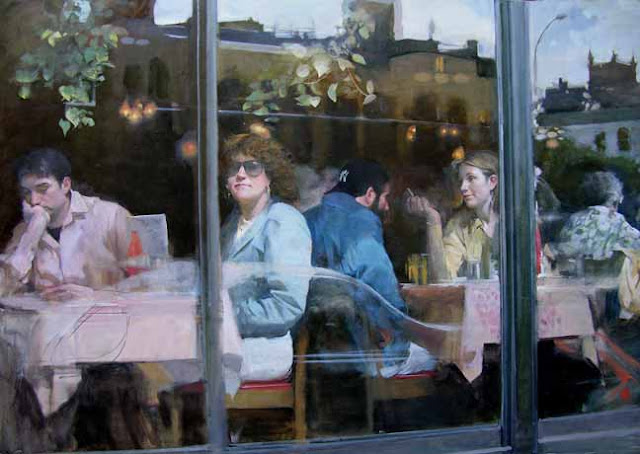 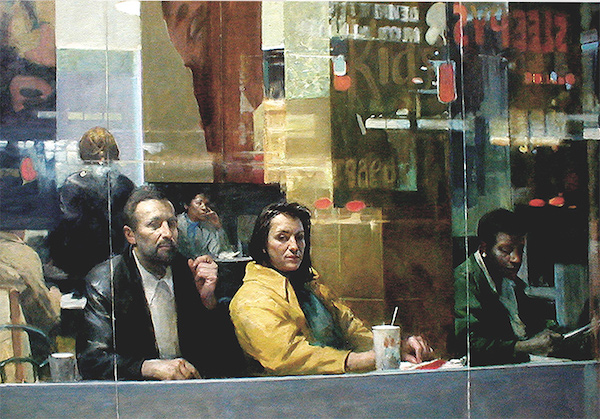 Fast Food - 2004
He makes use of photography as reference and take-off points.  Here a photo might have helped him with the window reflections.
Posted by Donald Pittenger at 1:00 AM

DP—Thanks for a post that recognizes a living artist with a remarkable career. It is nice to see artists who are still with us and who have proven themselves with a career of excellent work. You might consider featuring Silverman’s drawings some time in the future.

Daniel Green is another artist you might consider featuring. Keep up the fine work. I’m sure there are a host of us who check in with you almost every day.