John C. Wenrich (1894-1970) was a fine architectural delineator. While he wasn't as famous as his near-contemporary Hugh Ferris, he was involved in some important projects, one of which was Rockefeller Center.

Biographical information on Wenrich is scanty. This link is the best I could find using Google. And here is a blog dealing with Wenrich at a site featuring architectural illustration. It was the source of some of the images below.

The current post presents some of Wenrich's Rockefeller Center work. He had a nice, effective touch that wasn't as dramatic or impressionistic as Ferris' renderings often were. 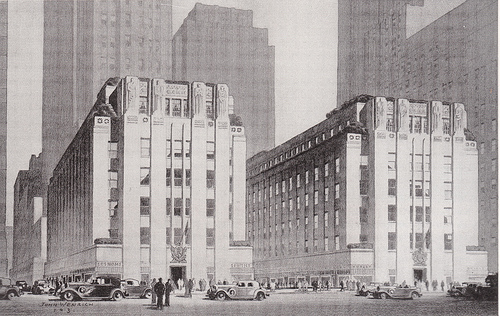 This features the Maison Française (left) and British Empire Building (right) separated by the "channel." The buildings as completed feature less ornamentation than shown in the rendering.

Rendering of 30 Rockefeller Plaza, best known to me as the RCA Building. 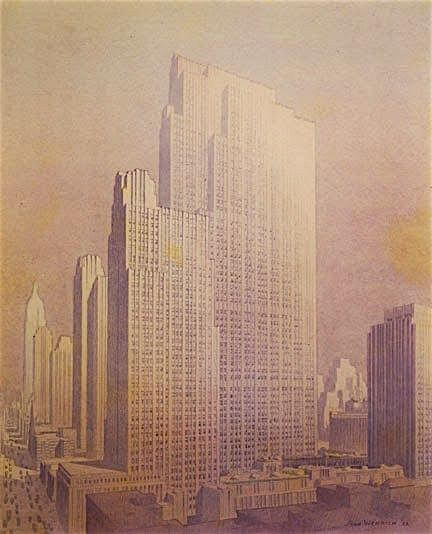 An earlier rendering showing the RCA Building. The two tall buildings to the left were conjectural. The left-hand one was never built, but a building somewhat similar to the one to the right exists, though it lacks the tower and other details vary. Wenrich included the Empire State Building (3/4 of a mile -- about one kilometer -- south on Fifth Avenue) at the far left. 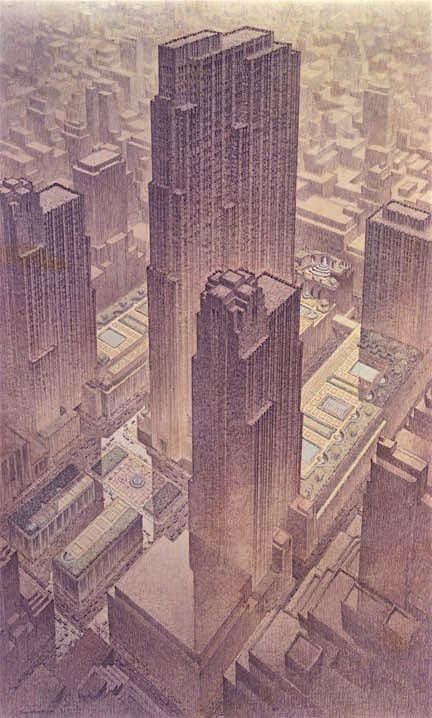 Another rendering done at about the same time as the previous one. Those two tall buildings on Fifth Avenue appear, as do the low-lying Maison Française and British Empire Building nestled between them. 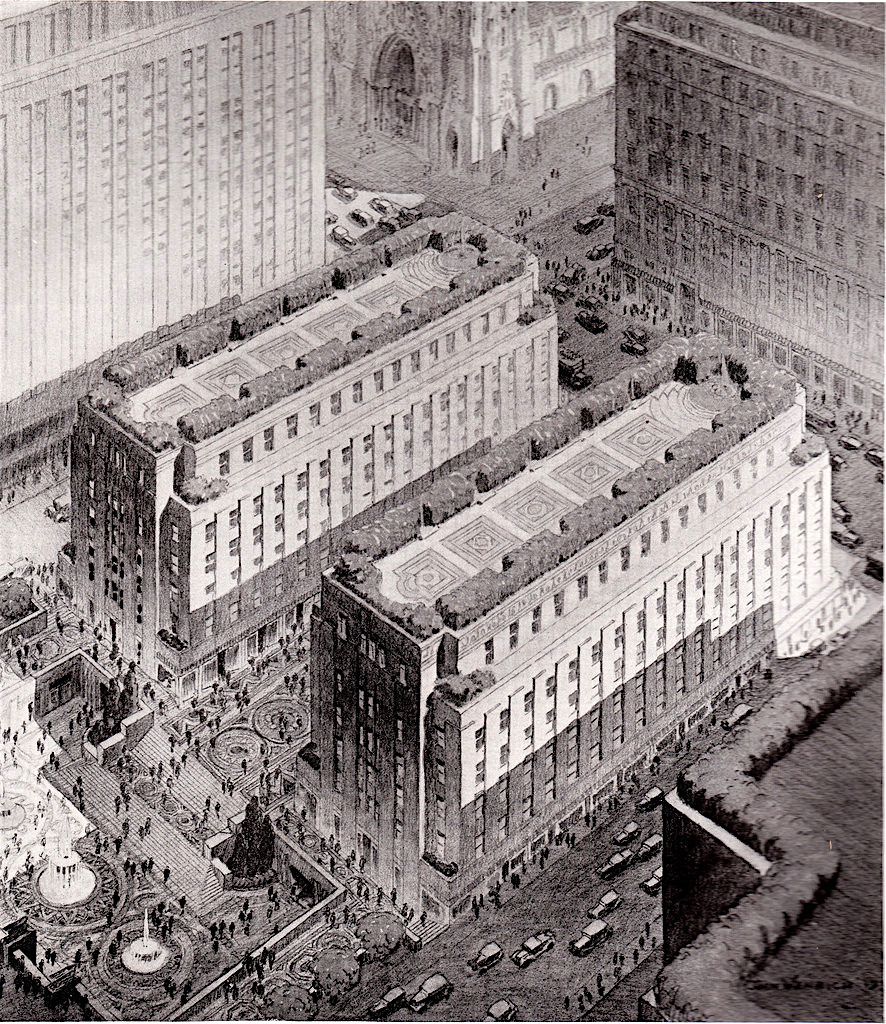 Showing rooftop gardens on the Maison Française and British Empire Building. These buildings actually received such gardens. The orientation of Wenrich's image is a view from the southwest, where St. Patrick's Cathedral is shown at the top of the image on the other side of Fifth Avenue. 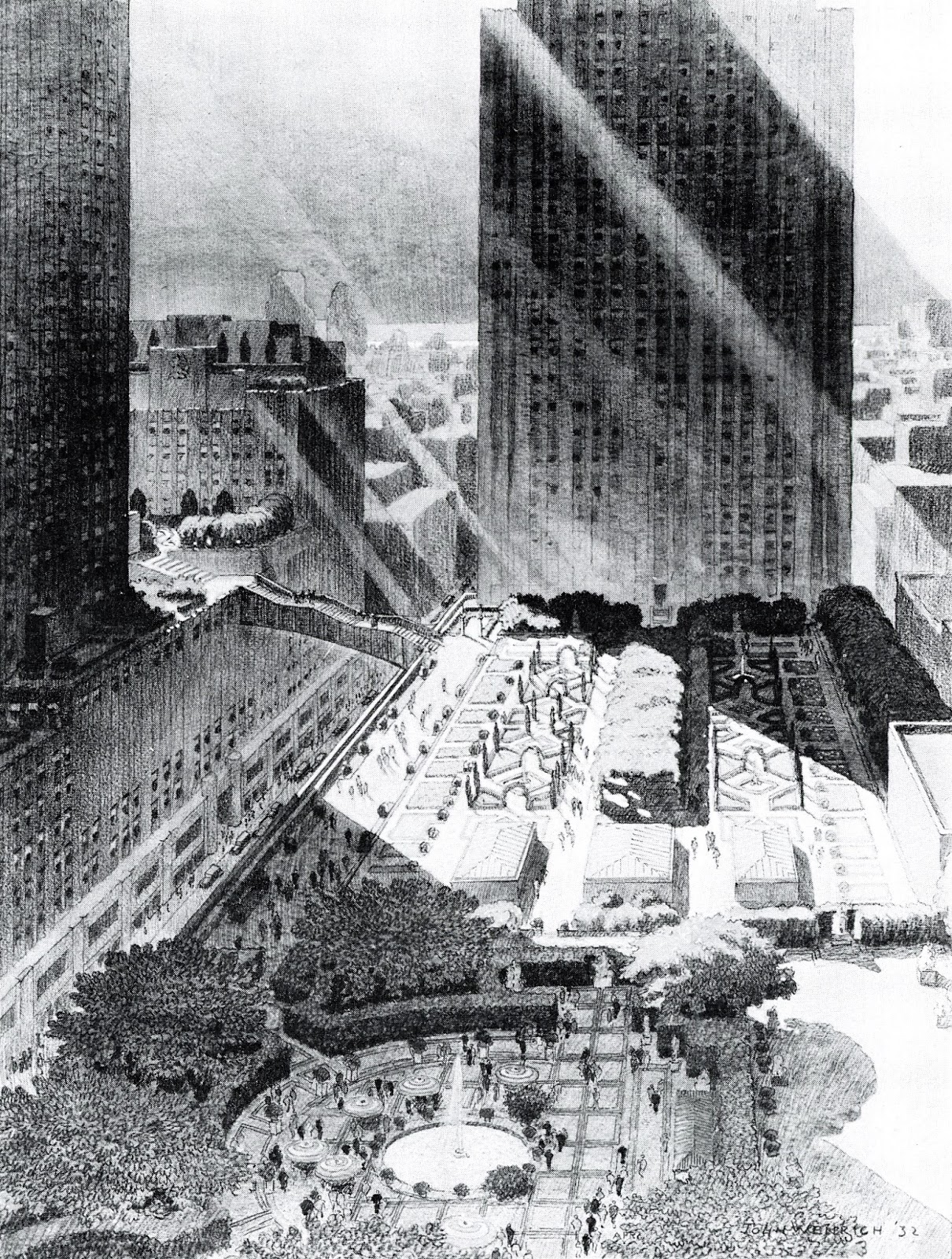 This 1932 rendering depicts a proposed rooftop garden on the Radio City Music Hall theatre. It was never made, the same being the case for the skybridge shown crossing West 50th Street. 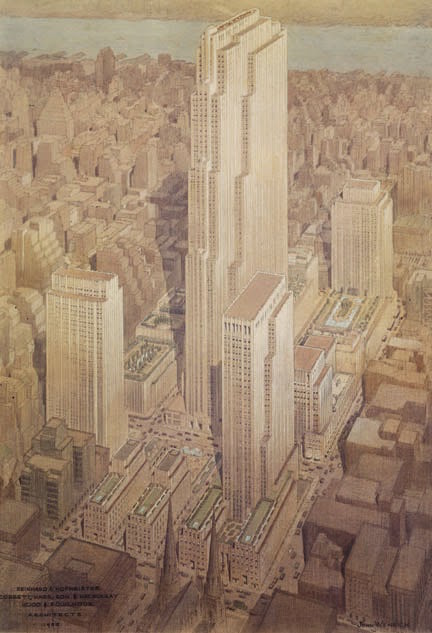 This later rendering is of Rockefeller Center's essentially completed first phase planning. It doesn't quite agree with what was actually built. For instance, a Music Hall rooftop garden is still included.
Posted by Donald Pittenger at 1:00 AM