Some Stations are Terminals

This blog is mostly about painting and illustration. One exception has to do with design, architecture and by extension the urban setting. This post is a bit of a stretch from even those topics, but I think it's okay to have a change of pace occasionally, especially on a holiday.

In England, the place where one catches an inter-city railway train is called a station. Some London examples are Paddington Station, Euston Station and Victoria Station. The same is generally true here in the USA -- but not completely. Most people, me usually included, call one such place in New York City Grand Central Station. But its actual name is Grand Central Terminal.

Technically, the place is a terminal because it is the final stopping point or initial starting point for trains. A station, by contrast, is an intermediate point.

Regardless of what they officially or popularly are called, railroad depots that are functionally terminals are relatively rare because the power of railroad systems lies in the fact that they are basically networks where what is carried can flow from place to place. An exception is at a transportation break, typically where a railway spur ends at a ship docking facility for transferring goods from one transportation mode to another.

Another exceptional case is certain large, old, dominant cities that serve as transportation hubs for their countries. In these cases, when railroading started in the 1800s it was already considered too disruptive to carve rail lines across those cities' central areas. Instead, terminals were established at various points around the peripheries of central areas, the rail lines heading away to places in their same general direction from the cities' centers. This is the case for London and Paris.

An alternative is to have a large, central terminal that serves a large number of places, rail lines serving them diverging a ways away from the center. This is approximately how it works in Rome and Milan, though each city does have lesser terminals and stations for commuter lines.

Below are a photo and some maps illustrating some terminals. 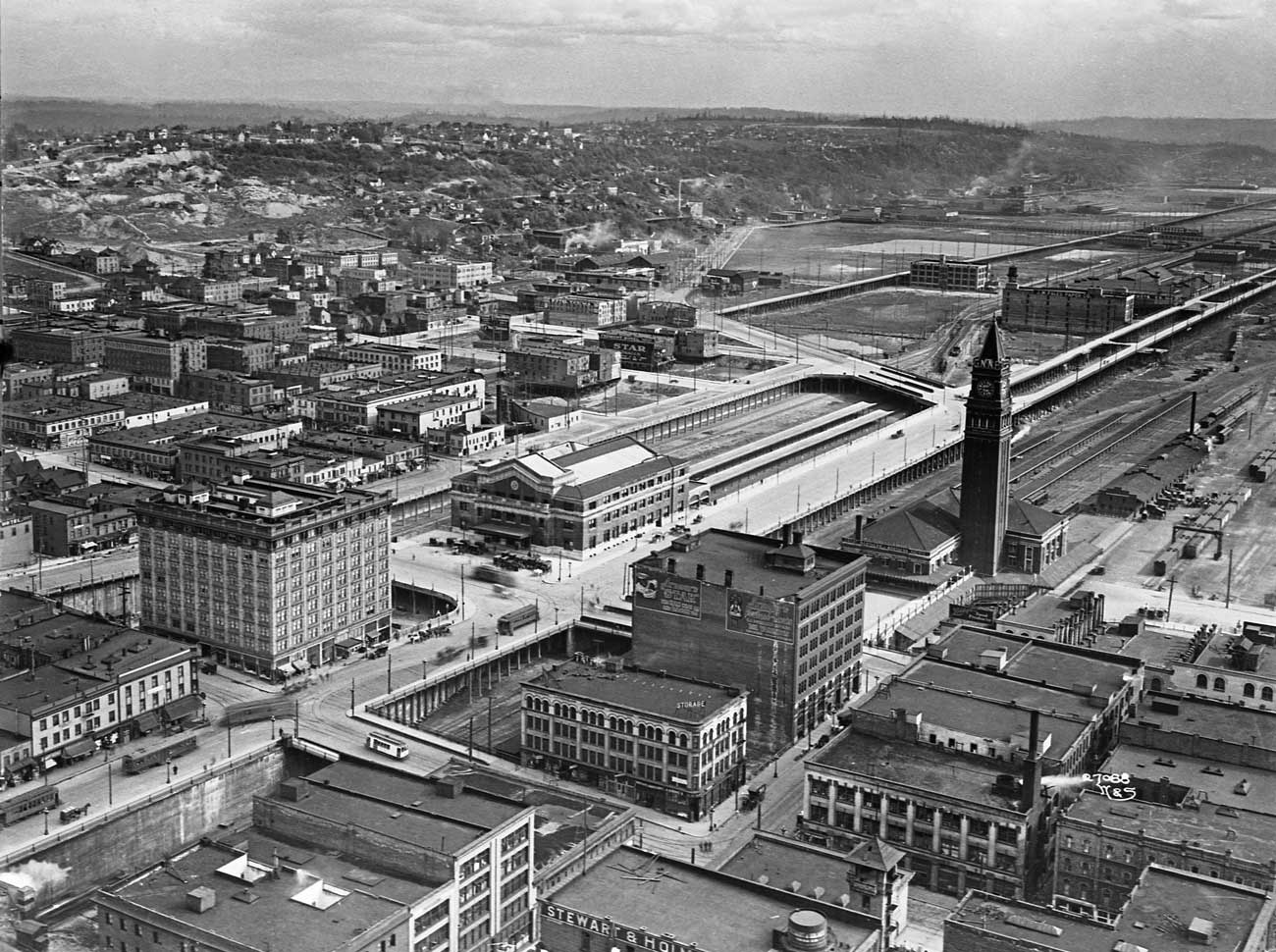 Seattle Depots - 1913
In the center of the photo is Union Station, actually a terminal used by the Union Pacific and Milwaukee Road lines.  To its right, with the tower, is King Street Station used by the Great Northern and Northern Pacific railroads.  It actually is a station because some tracks head in our direction and reach a tunnel under Seattle's downtown.  You can glimpse those below-street-level tracks if you drop your eyes down from Union Station.

London terminals
They all bear the Station name, but are terminals except for London Bridge Station.  Before the postwar nationalization of railways, each station was associated with a railroad serving its own (but sometimes overlapping) region of Britain. 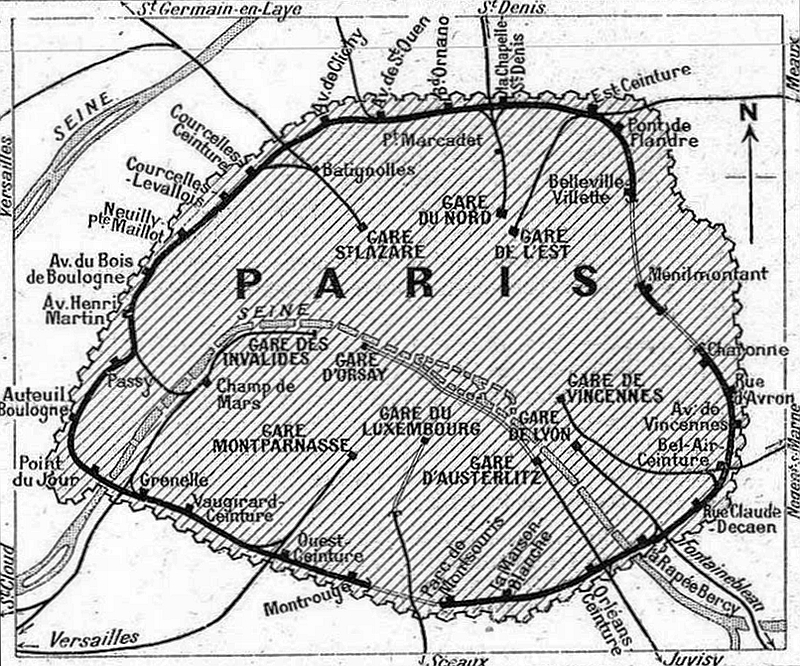 Paris terminals - 1900
This image featured a peripheral line running just inside Paris' fortifications that approximate the route of the Périphérique, Paris' beltway freeway.  Not all these terminals remain: the D'Orsay is now an art museum, for example.  The functioning intercity terminals are the St. Lazare, Nord, Est, Lyon, Austerlitz, and Montparnasse. 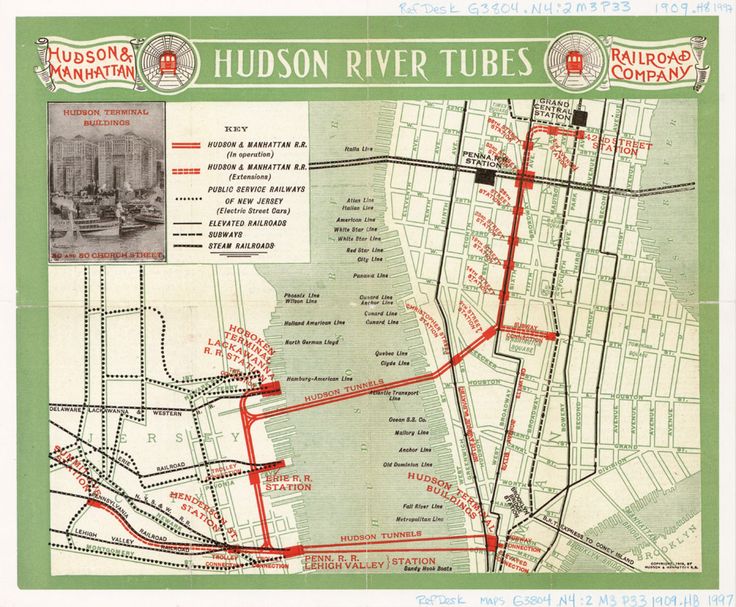 New York - 1909
This map features a subway commuter line connecting parts of Manhattan with New Jersey.  At the upper right is Grand Central Terminal (called "Station" here), and nearby black lines indicate subway and elevated local transportation lines.  Grand Central served the now-defunct New York Central and New Haven lines for many years.  Pennsylvania Station, the other major New York depot, is a true station because some tracks under the station structure connect Pennsylvania Railroad tracks (to the west) to Long Island Railroad tracks (to the east).  The Pennsy also no longer exists but the tracks remain. 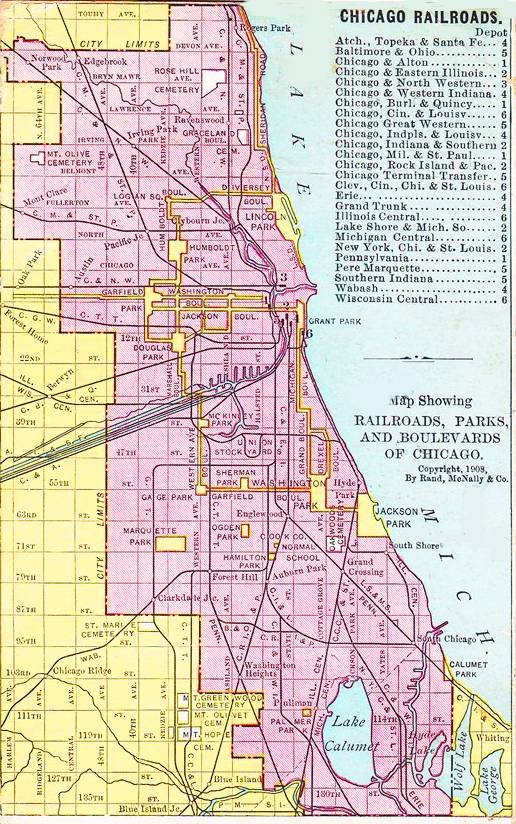 Chicago - 1908
I include this map mostly because of the long list of railroads serving Chicago more than a century ago.  Aside from the present government-run Amtrak passenger system (started in 1971) that uses private lines' rails, there never has been a transcontinental railroad company in the United States.  A number of major lines served the eastern part of the county and extended as far west as places such as St. Louis and Chicago.  And there were western railroads serving places as far east as those and a few other cities.  There also were railroads serving the central part of the country, but their tracks did not extend to the east and west coasts.  For someone traveling by train from coast to coast in the heyday of passenger railroading, it was necessary to change railroads in places such as Chicago. 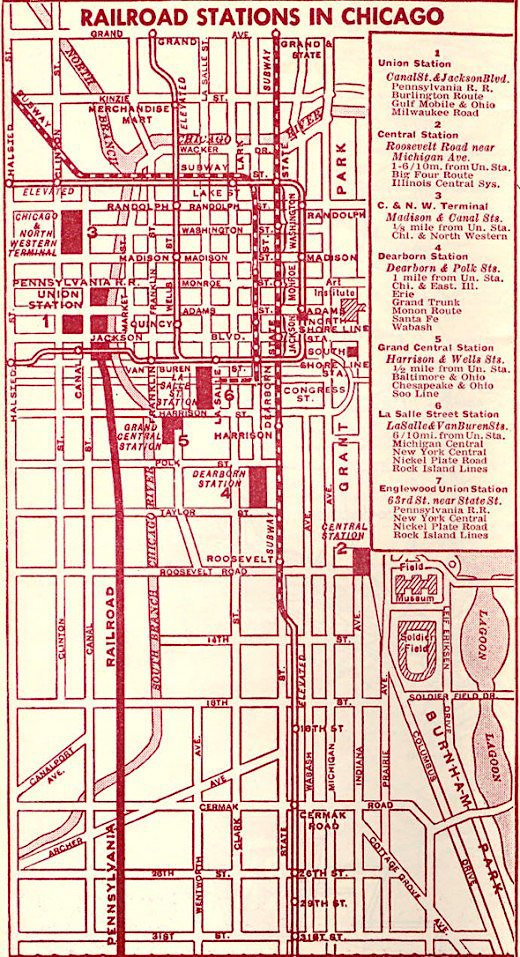 Chicago - 1958
This map shows that downtown Chicago was served by seven terminals (most called Station) in the 1950s.  When I was young, I once arrived in Chicago on the Milwaukee Road at Union Station.  We departed on the New York Central a few days later at La Salle Street Station.  Note that Union Station served the westerly Milwaukee Road and the easterly Pennsylvania Railroad.  But being a terminal, there was no through trackage.  The lines branched a ways out of town.

On the 1909 Manhattan map, the Hudson River tubes (now known as the PATH train) is shown with a proposed extension to Grand Central Terminal. It never got built.