American newspaper comic strips were greatly reduced in size decades ago and their content was reduced to various kinds of humor. Gone were the plot-continuity strips occupying a half or even a full page such as were found in 1930s Sunday papers.

One such strip was Terry and the Pirates, an adventure series taking place in China. When World War 2 came along, it evolved into a military-themed strip. By late 1946 Milton Caniff, its creator, had tired of the distribution syndicate's control and moved on to create an Air Force themed adventure strip.

Due to its popularity, Terry was continued by another artist, George S. Wunder (1912-1987) -- Wikipedia entry here. Wunder has been criticized, with some justification, for his treatment of faces. But what interests me here is the degree of background detailing found in his version of Terry, a carryover from strips of the 1930s and still common into the 1950s. That is, Wunder ranked up there with other cartoonists whose strips still went well beyond containing mostly faces and dialog balloons.

Background settings require a lot of extra work for the cartoonist who was under pressure to maintain about a six-week backlog to allow for production and distribution to newspapers carrying the strip (and for times when the artist was ill or otherwise not productive). The link to Wunder mentions that he took on an assistant in 1962, implying he did it all before that time (and stating that he continued to do the Sunday strips alone). A rational division of labor would be for the main artist to deal with the characters and leave backgrounds and other detailing to assistants.

Below are some examples of Wunder's Terry and the Pirates from his first five years on the job. Click on the images to enlarge.

October 27, 1947
A daily panel featuring Terry, Pat Ryan, Hotshot Charlie and slang-talking Chopstick Joe who is always on the lookout for making money. 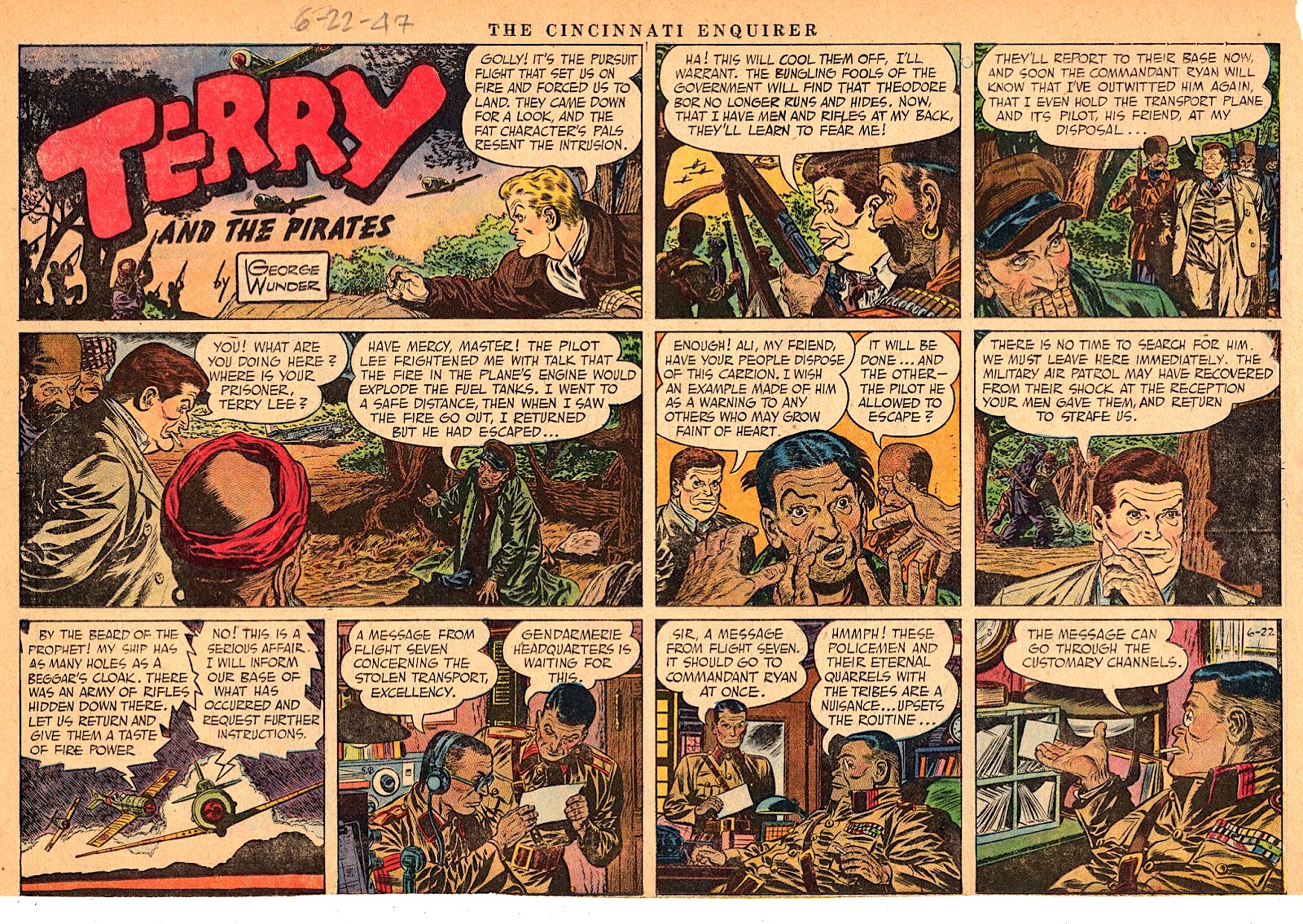 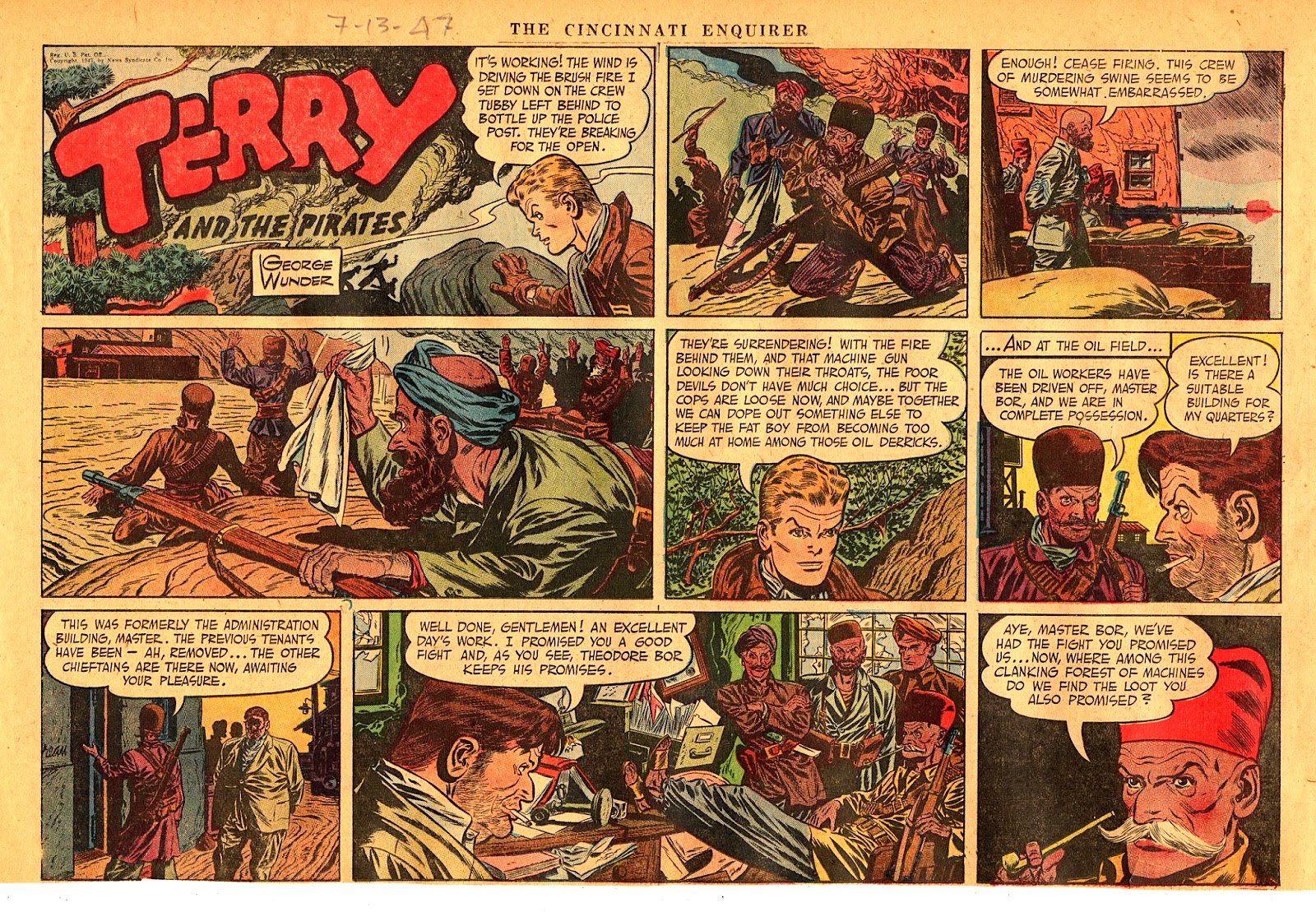 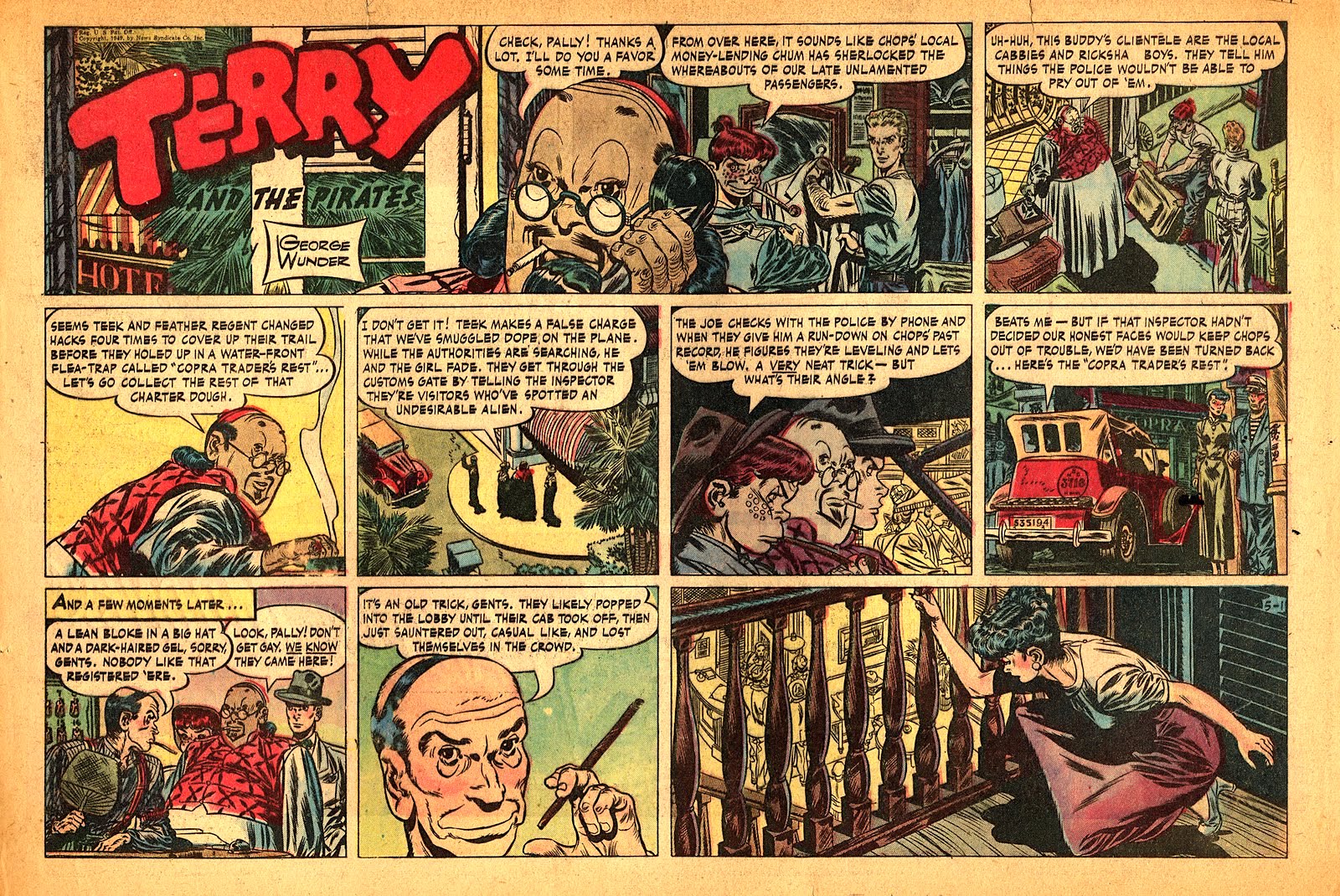 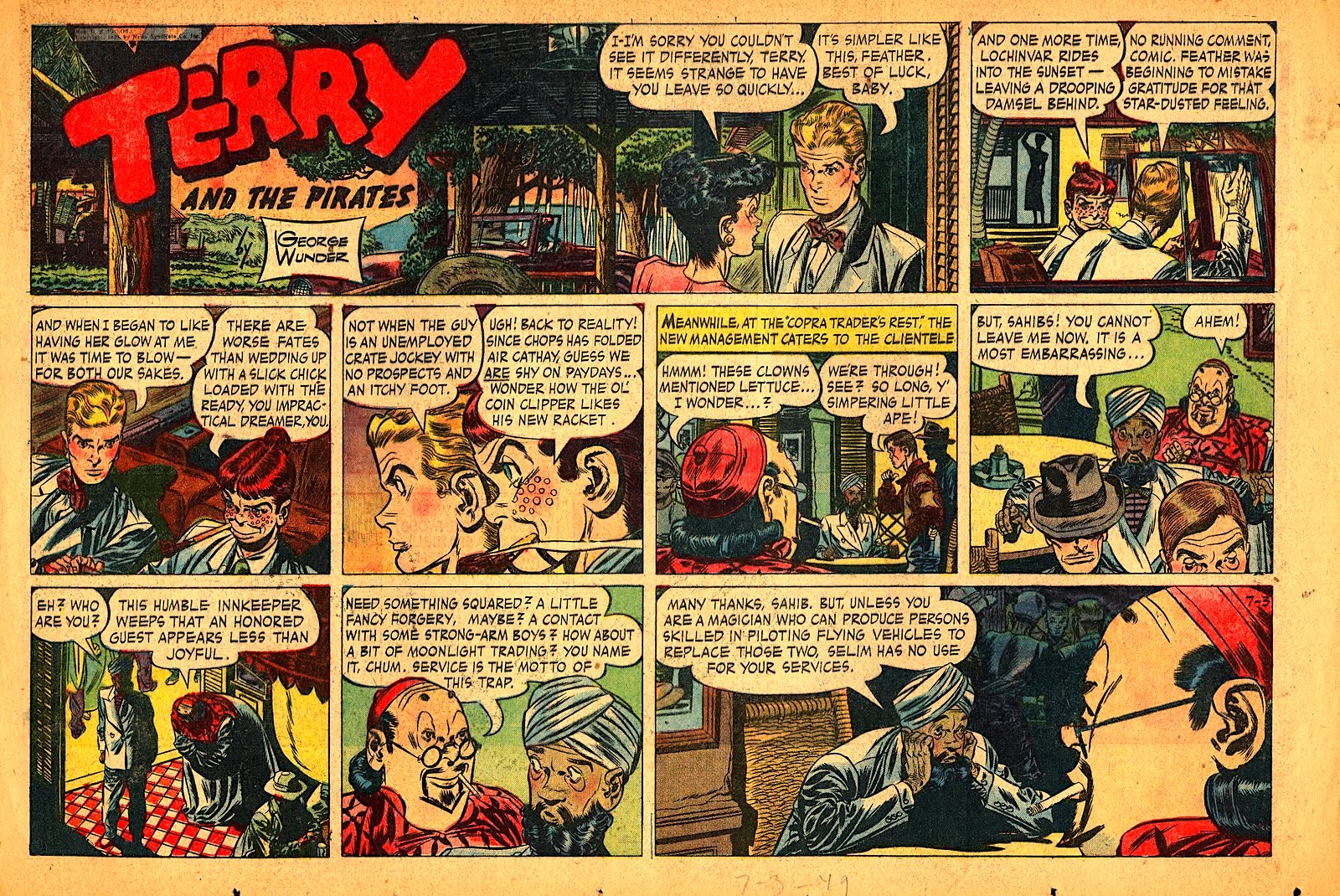 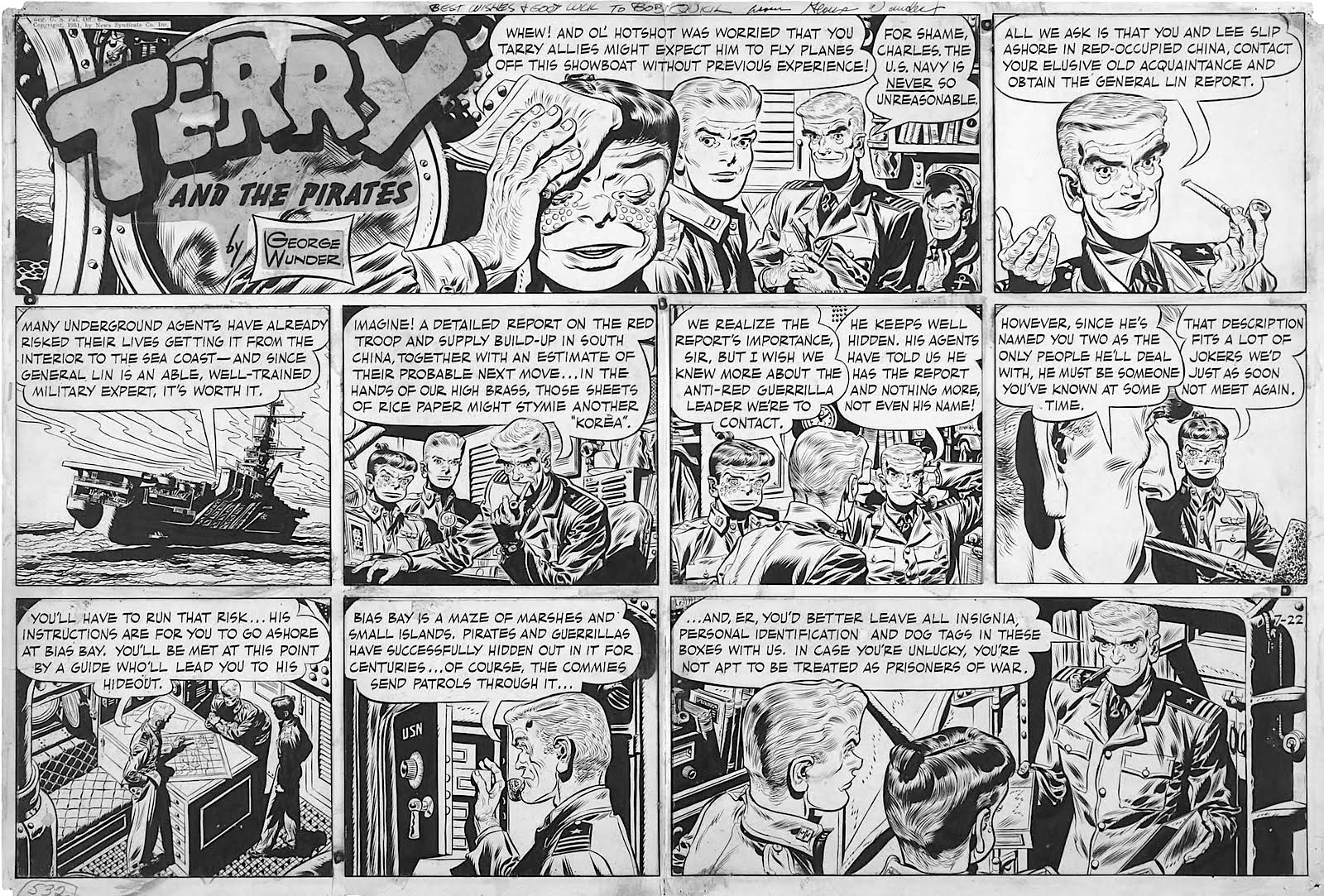 September 22, 1951
This seems to be original art -- note how the title and artist's name are attached to provide consistent branding over time.
Posted by Donald Pittenger at 1:00 AM