Reader Paul Sullivan's comment to this post about San Francisco murals by Frank Brangwyn (1867-1956) inspired the present post. The concept is to compare Brangwyn's style with that of Dean Cornwell (1892-1960), a successful American illustrator who set aside his career for a few years in the early 1930s to paint murals for the new Los Angeles Public Library Central Branch Building. Information about that project can be found here. I wrote about those murals here.

Brangwyn was a famous and prolific mural painter, so Cornwell managed to become an assistant in order to learn the trade. He helped Brangwyn on one or more of the British Empire series of panels intended for the House of Lords. They were ultimately rejected, and can be found in Swansea, Wales.

Below are examples of Brangwyn's and Cornwell's works. Click on the images to enlarge. 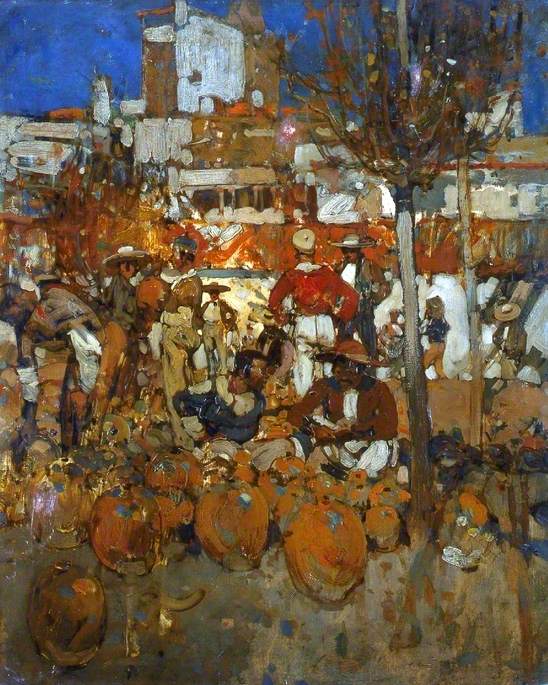 Funchal, Madeira - 1891
Painted at the time Brangwyn broke away from traditional, illustration-style painting. Note his use of outlining, bright colors and free brushwork. From this point on, his paintings and murals featured a strong decorative component, one especially well suited for large murals. 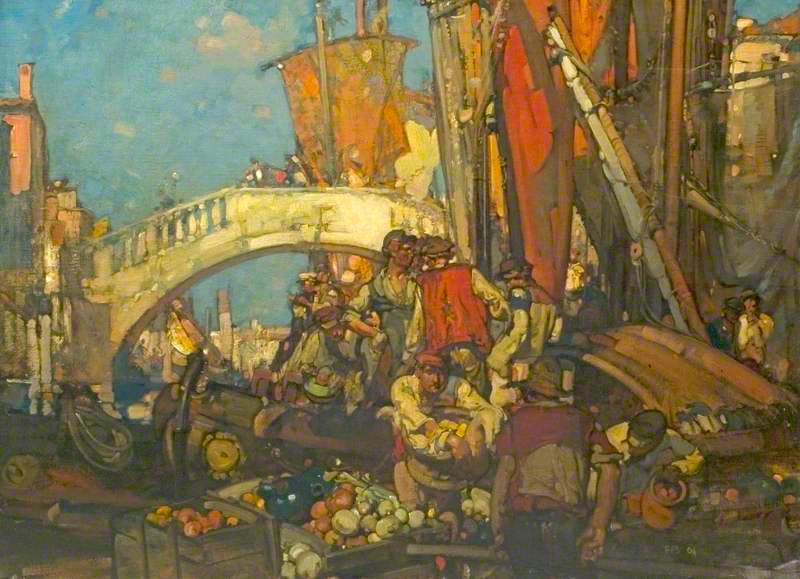 A Venetian Scene - 1906
Outlining became something of a Brangwyn trademark, and was used by many mural painters in the 1920s, especially. In this painting most outlines in the foreground are dark, but those for background work are lighter. 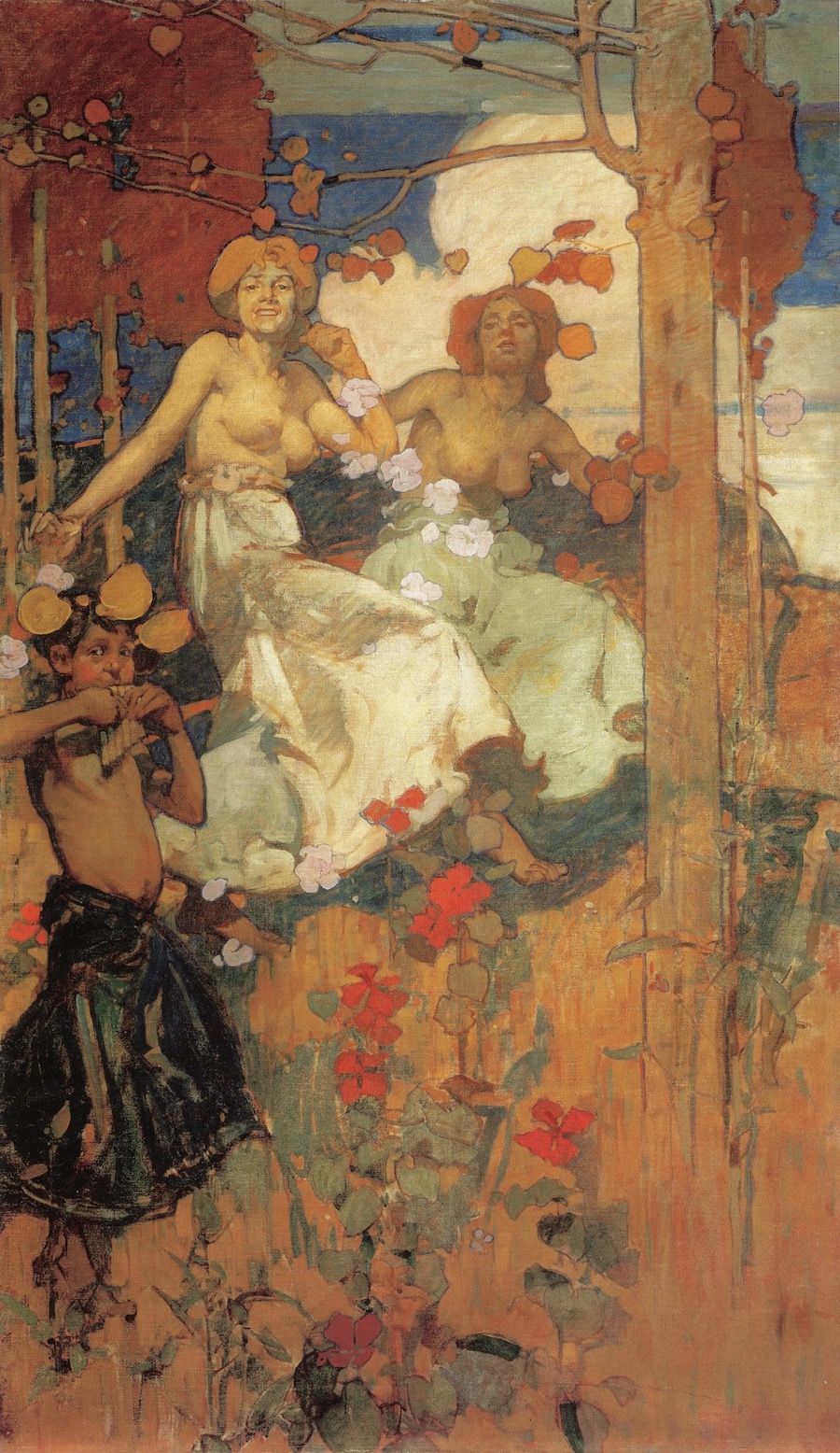 Dance - 1895
One of Brangwyn's earliest murals, painted when living in Paris. Enlarge to better view outline colors. Some are very dark, some are brown, others are blue-gray.  I've always wondered if he had a system for selecting outline colors, but so far have only decided that darker, heavier lines were for dark subjects or where emphasis was desired. Let us know if you have cracked his code. 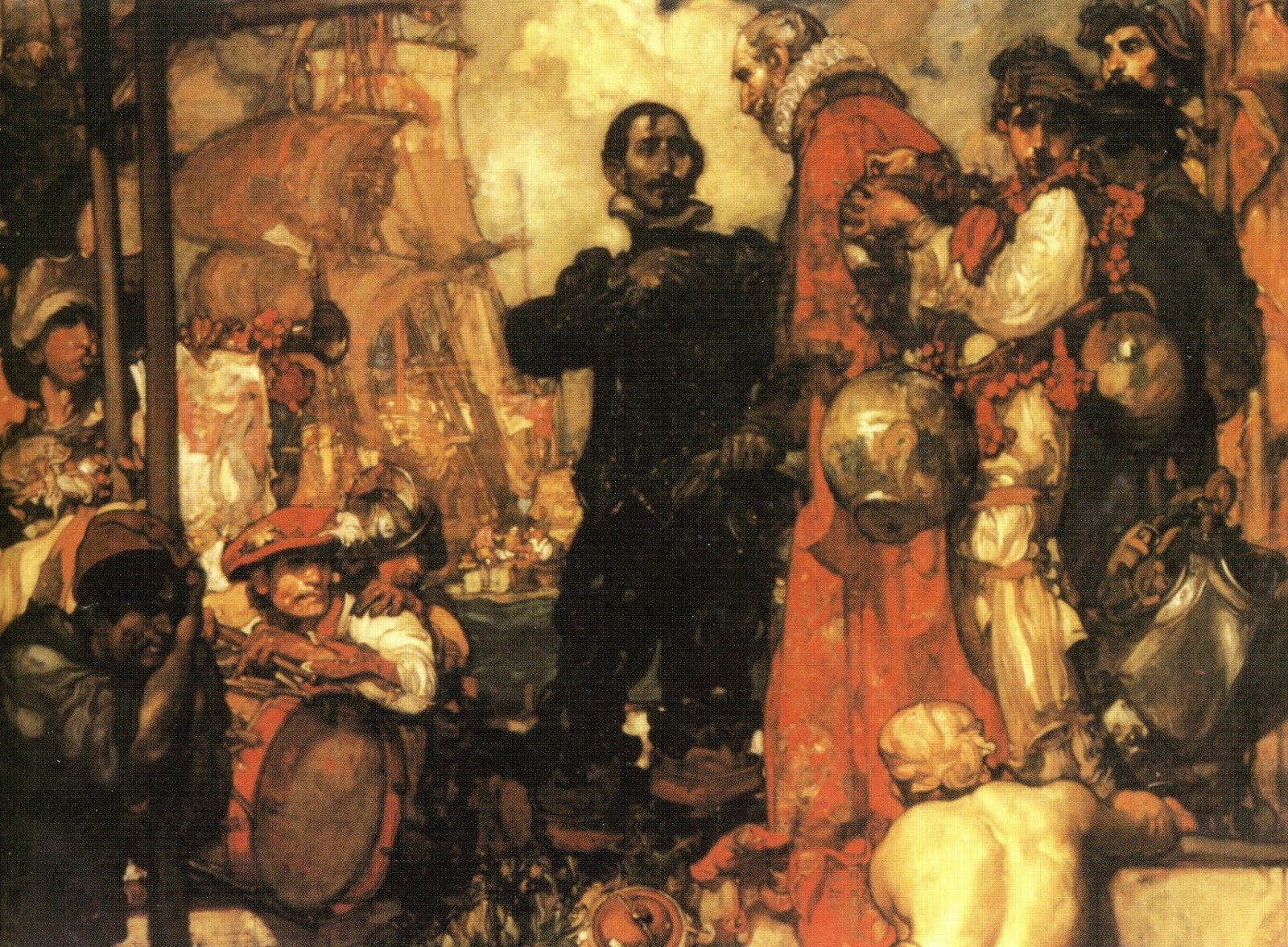 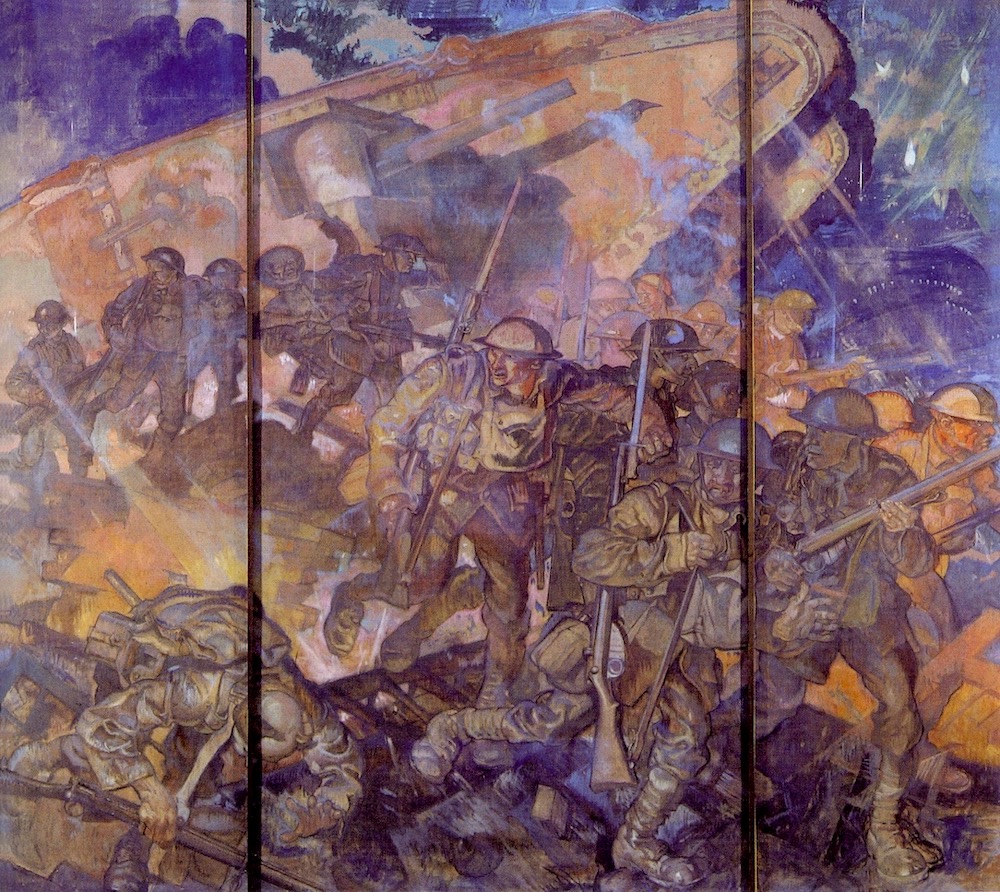 Tank in Action - 1925-26
No strong reds here. This was an early attempt in the House of Lords project, but was rejected due to its subject matter. Plenty of outlining for foreground subjects, hardly any for the background tank. 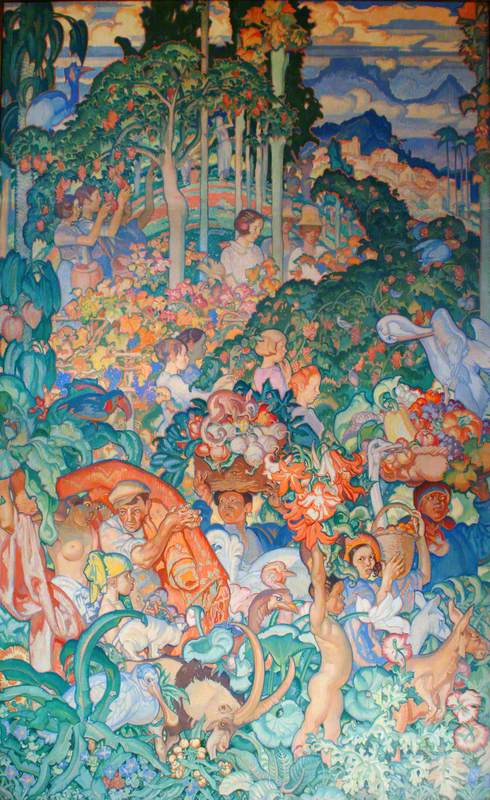 British Empire Panel 5 - Canada
This was the kind of panel that Cornwell could have worked on. Outlines on the people and other foreground items are painted light blue, though some background outlining is darker.

Mission Building
One of Corwell's LAPL murals. He used light blue for many outlines, but other colors where he decided that a different emphasis was needed to clarity the subjects and their main colors. 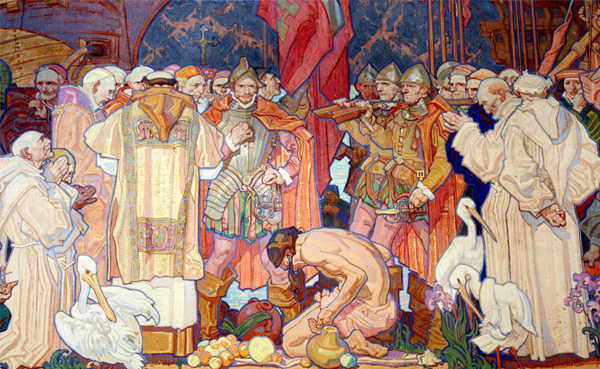 Detail of a mural
Again, a good deal of light blue outlining plus some darker blue outlines. Like Brangwyn, Cornwell includes plenty of details to fill the space. Also like Brangwyn, reds and oranges are key parts of the color scheme. 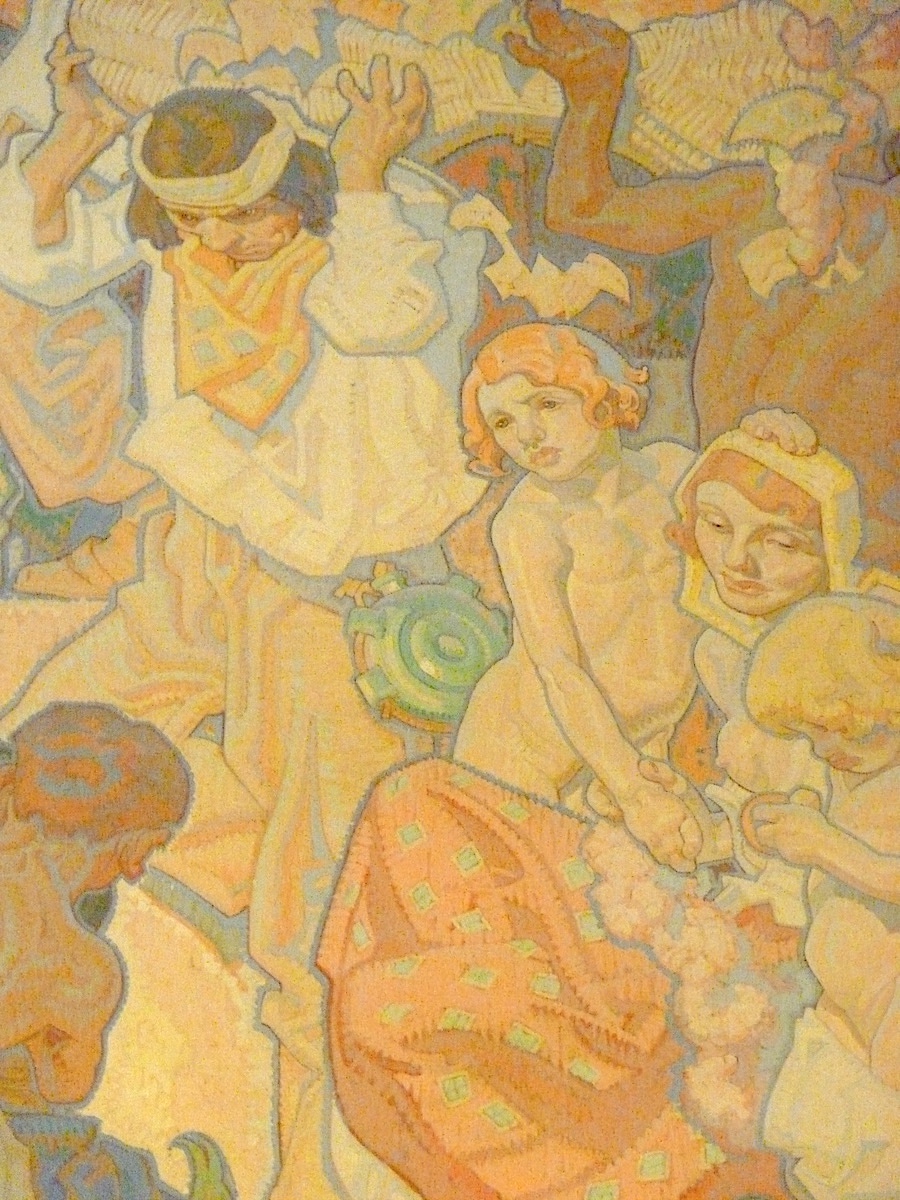 Detail of a mural
A photo of a LAPL mural I took nearly 10 years ago using a camera not quite up to the job. Here we find nearly exclusive use of blue outlining. Cornwell's style is less dramatic than Brangwyn's, though these murals do retain a feel for the master's work. 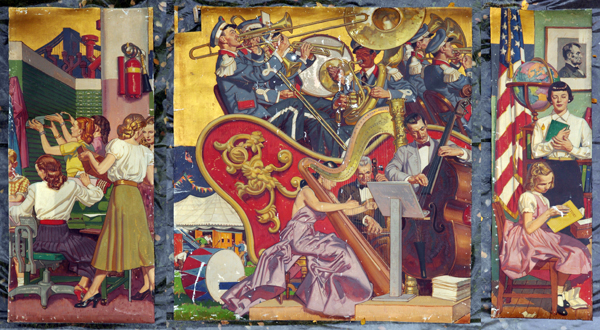 American Federation of Labor triptych, Centre William Rappard, Genève - was International Labor Office HQ - 1955
This rather surprised me when I found it on the Internet because I thought that Cornwell had abandoned mural-painting by this late in his career. Here the Brangwyn influence is gone, replaced by Cornwell's 1950s illustration style.
Posted by Donald Pittenger at 1:00 AM