Frank Brangwyn (1867-1956), Wikipedia entry here, was British artist whose paintings and murals have always fascinated me. My post on those aspects of his work is here.

Aside from his unfortunate set of murals in New York's Radio City that I wrote about here, concentrations of Brangwyn's work are rare in the United States and mostly off the usual tourist track. However, it turns out that there are some Brangwyn's in another major American city.

A few months ago I was in San Francisco on a dinner-date-plus-piano-concert and stumbled across a Brangwyn trove I was totally unaware of -- a set of eight large murals in the auditorium of the War Memorial building in the Civic Center district. At first, I thought they might have been done by him, and later confirmed this via an Internet search.

It happened that they were commissioned for the 1915 Panama Pacific International Exposition and later installed in the auditorium as noted on page 34 of this book:

"The rest of the fair's public art was not dispersed as widely as the contents of the art pavilions. Having been executed on removable canvas, most of the murals were saved and turned over to the Trustees of the San Francisco War Memorial in the hope that they could be installed in other public buildings (Brangwyn's murals were eventually installed in the War Memorial Herbst Theatre, which was completed in 1932, while the others were placed in storage)."

Further research on the Internet revealed that the murals were displayed at the Court of Abundance at the exposition. Their themes were the Classical elements Earth, Air, Fire and Water. Two murals were painted for each theme.

I took some iPhone snapshots of the murals as an aide-memoir, assuming that I'd be able to find better examples on the Internet. Alas, it turns out that I found nothing really satisfactory, so the images below are of mural fragments taken from odd angles. Nevertheless, I hope you will find them interesting.

First, two images I found on the Internet showing the general arrangement. 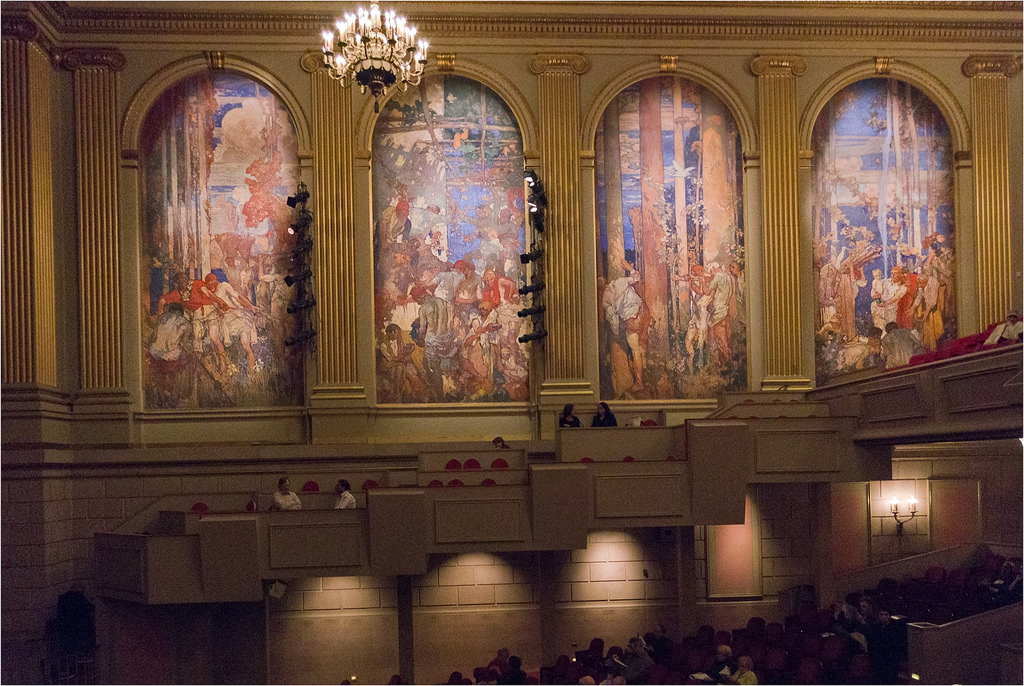 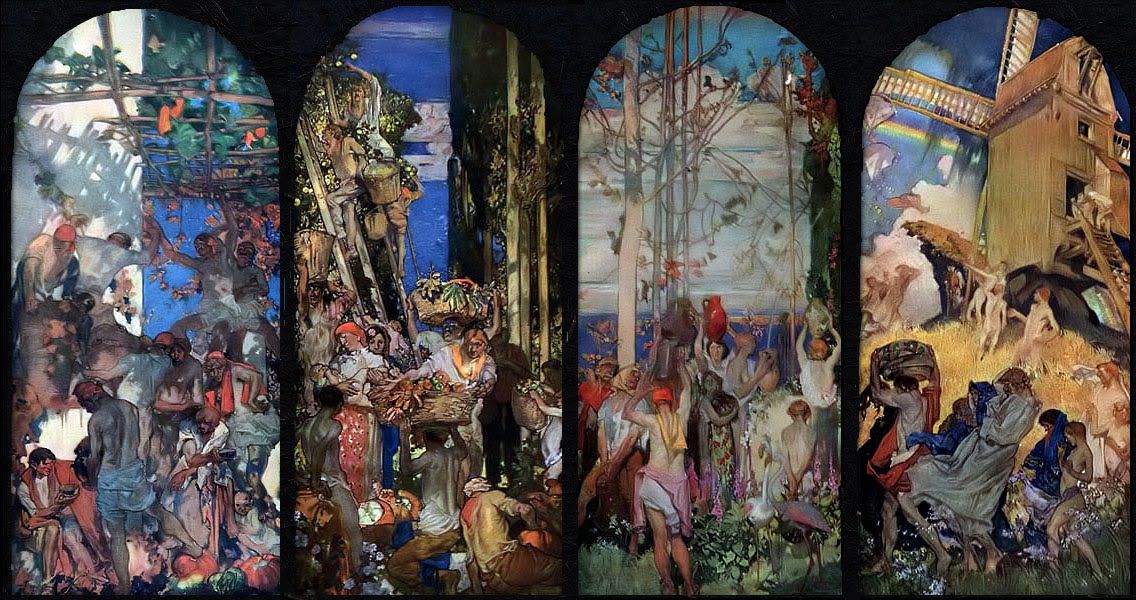 Now for a collection of my snapshots (click on them to enlarge) ... 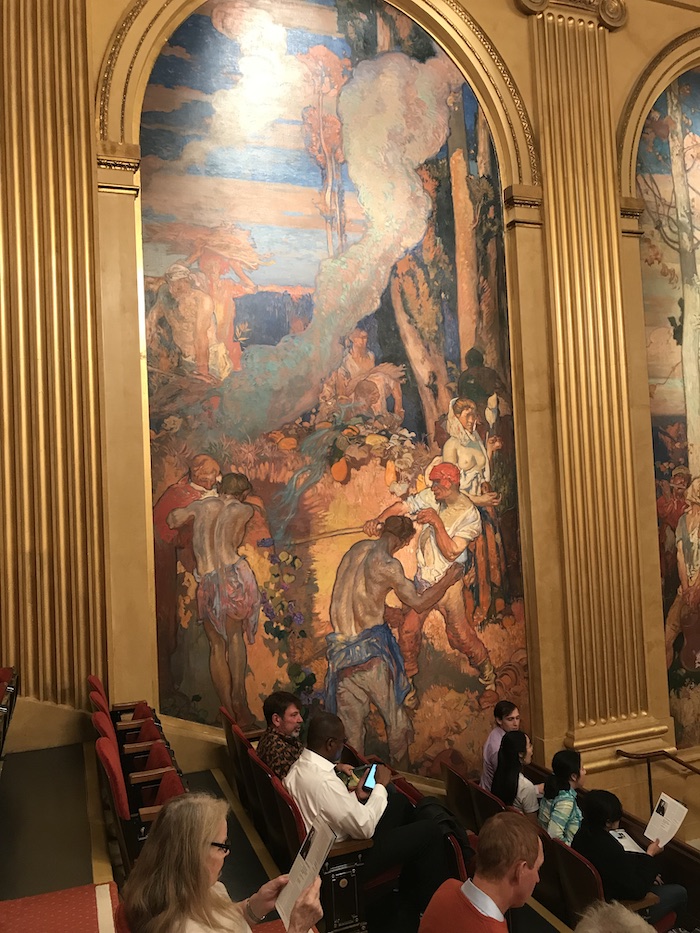 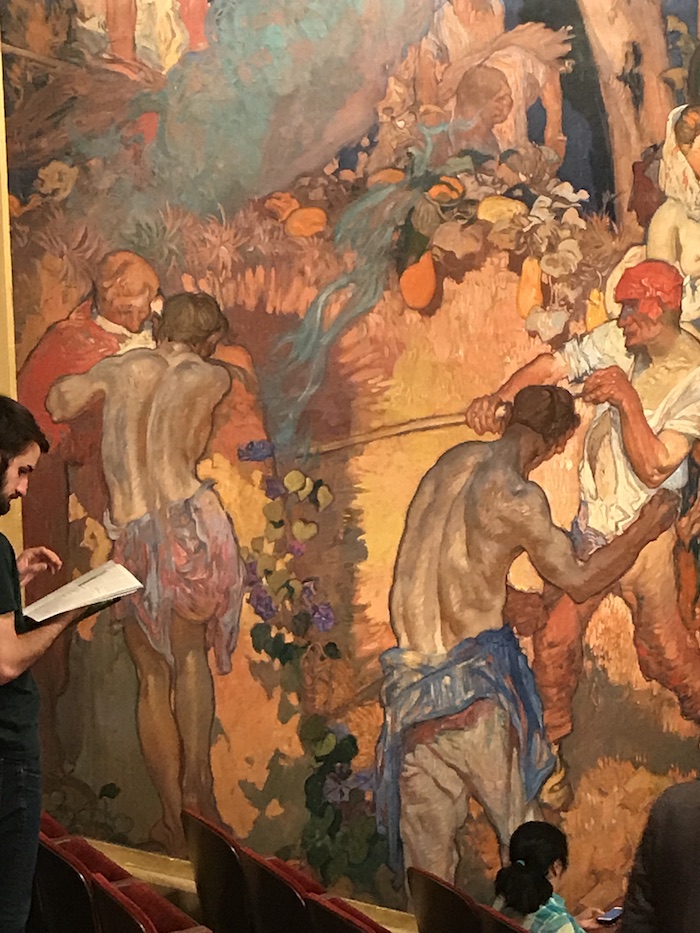 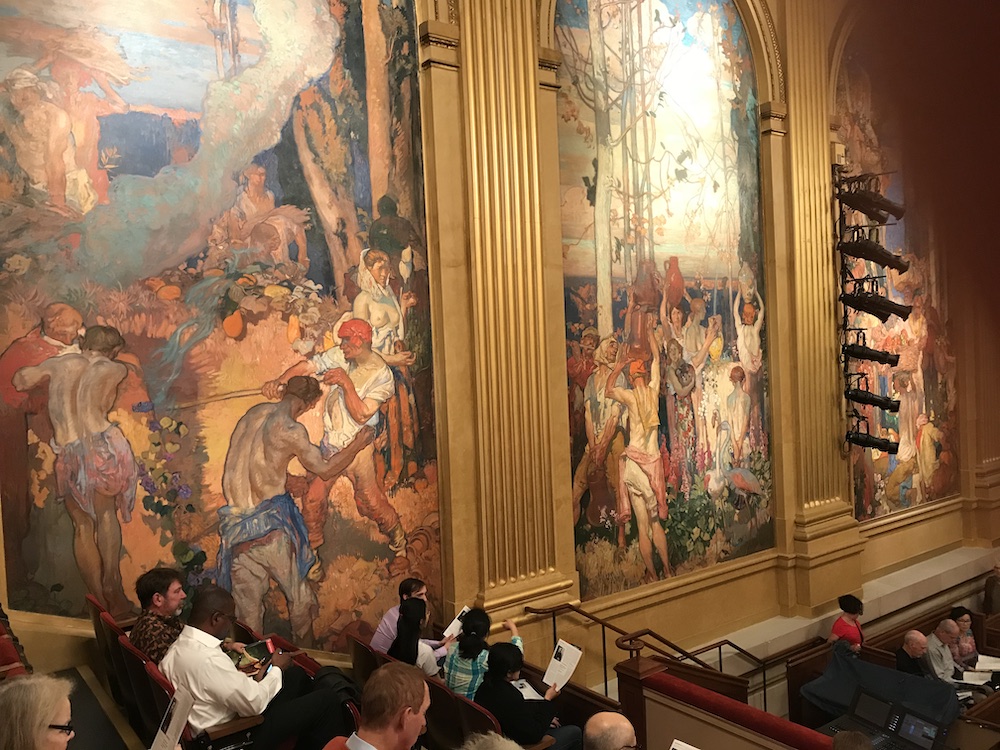 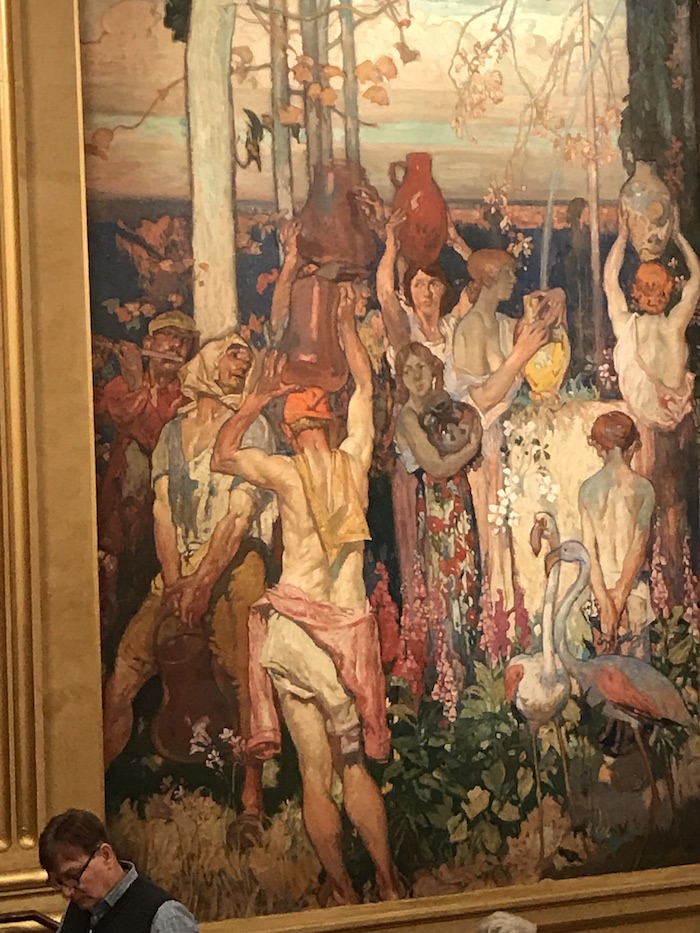 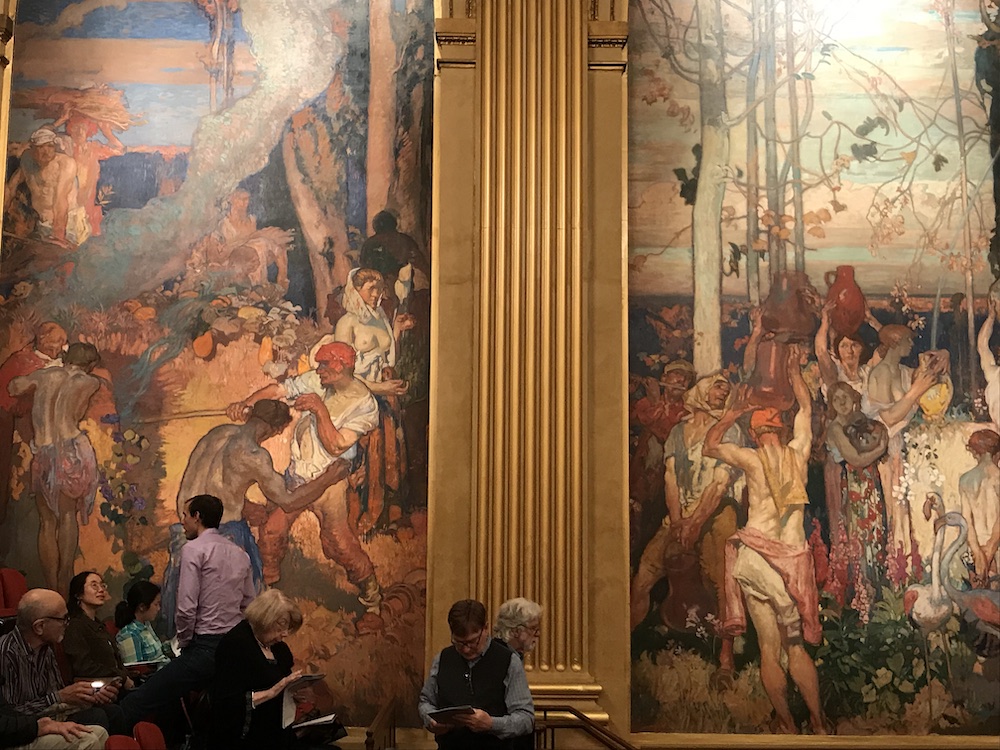 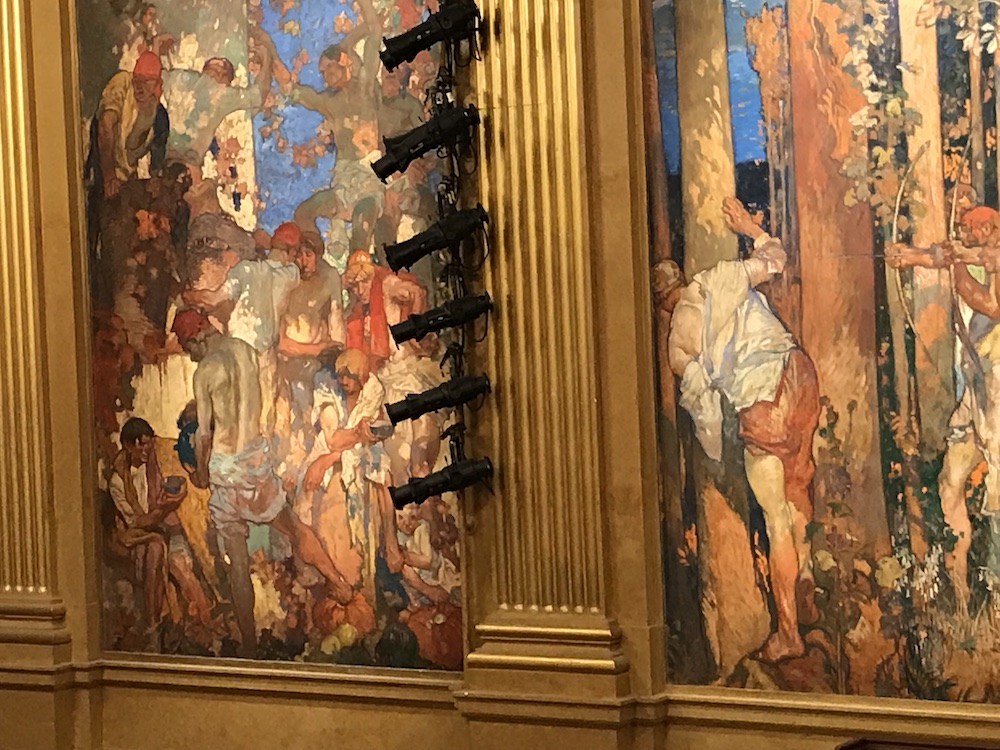 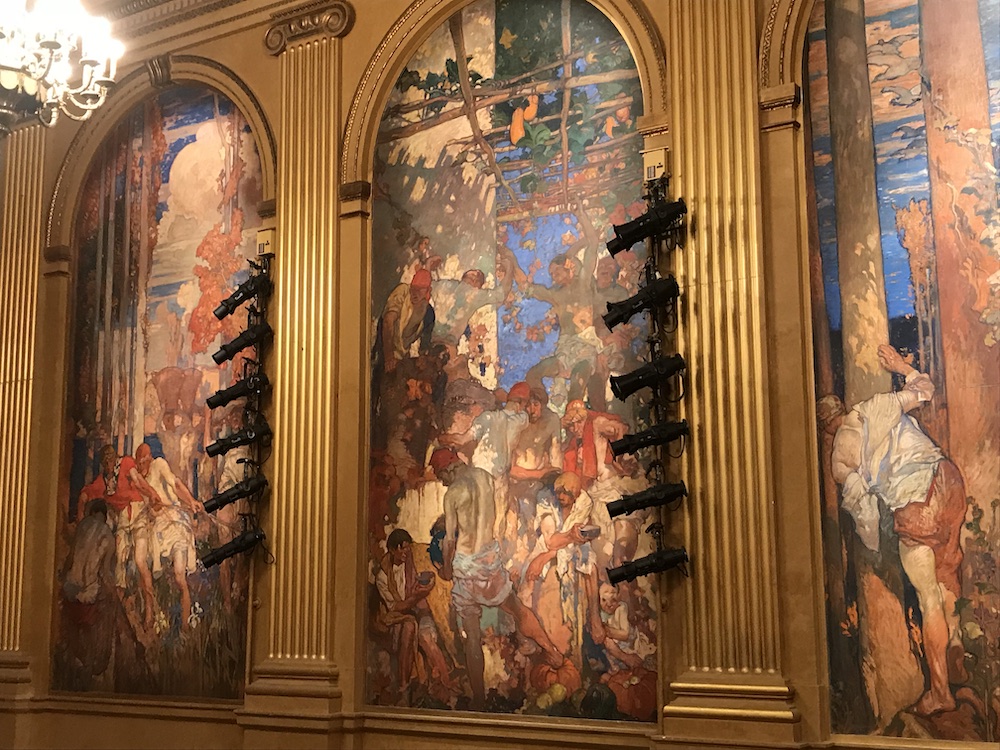 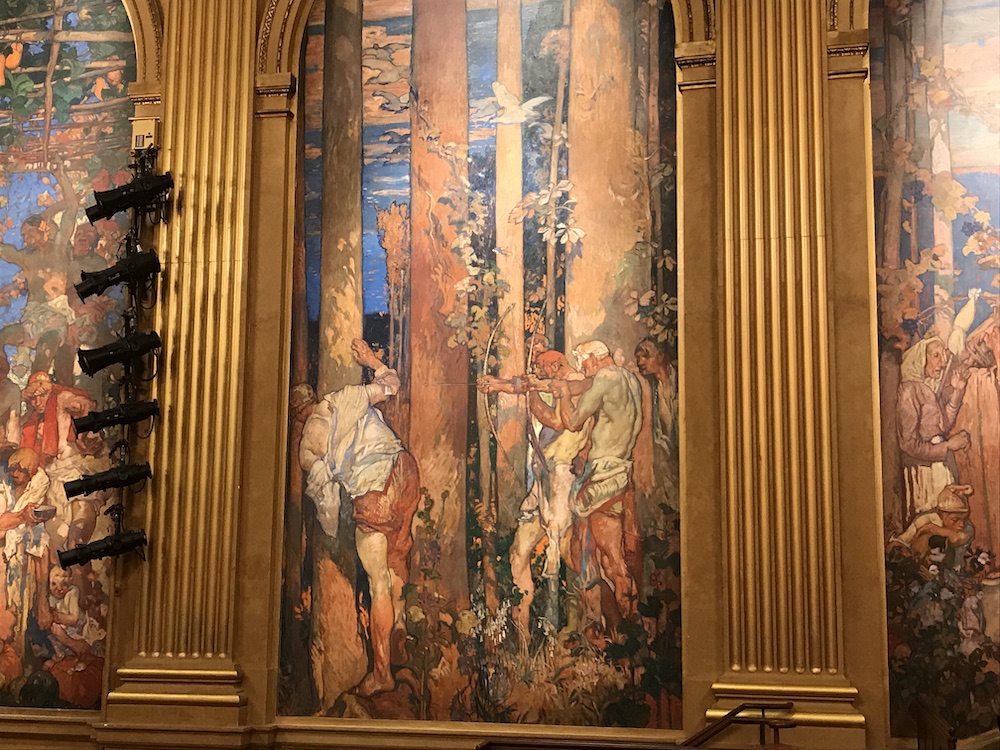 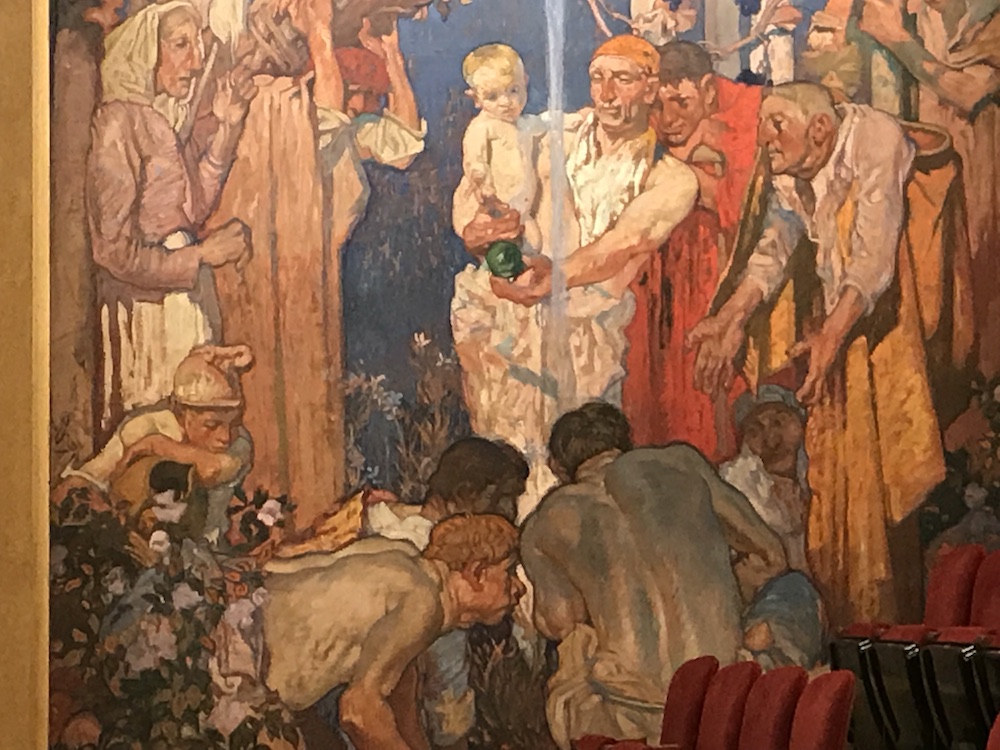 Some of the people portrayed in this mural have the knobby features he painted nearly 20 later for the RCA Building lobby that I criticized in the second link above.

I’m a big fan of your blog and your commentary on art and illustration.

With this post and a previous one, I am surprised you did not mention Brangwyn’s one time apprentice, Dean Cornwell. I don’t know much about Brangwyn but am amazed at the influence he had on Cornwell’s mural work. Cornwell's murals for the Los Angeles Public Library have the Brangwyn influence all over them. Cornwell had a tendency to jam his murals with much too much going on—although I think he was a much better draftsman than Brangwyn.

I don’t understand the reasoning behind the monochromatic murals done for 30 Rockefeller Plaza. The space looks much too cramped for sweeping themes containing heroic images.

Paul -- Well, the subject was Brangwyn, so mentioning Cornwell would have been a distraction. I've written several posts about Cornwell, and in the one dealing with his Los Angeles Public Library murals, I noted his link to Brangwyn.

Perhaps I should write a post where I compare the two directly, showing examples of mural art because there are similarities. Thank you for prompting this idea.

I think that would be a good idea. I would enjoy reading your thoughts on a comparison of the two. There is certain stylization to the figures of both artists. To some degree, their color is quite similar.

One of the things I have noticed about Cornwell's picture design is the separation of figures by using groupings of common value and color intensity. Many times they can almost look like cut-outs. I see that in some of the Brangwyn work you've posted, especially in the fourth and eleventh panels. In the eleventh panel, the foreground is established in this manner. Cornwell used this technique a lot in his illustrations. His illustrations for "The Robe" are an example of this.

Some of this may be what was popular at the time. Many illustrators used similar techniques including outlining. Herbert Paus is a good example.

One of Frank Brangwyn's major assistant artists for the 1915 murals was Allen Tupper True. He worked on and then supervised their placement in the Court of Abundance (aka Court of the Ages) at the 1915 Panama-Pacific International Exposition.
Two links below: