In November I visited the Museo Archeologico Nazionale di Napoli (National Archaeological Museum, Naples) to view the better-quality paintings unearthed in Pompeii and nearby areas covered with the ash of Mt. Vesuvius. What remains on-site is generally badly faded or otherwise of poor quality.

This post deals with depictions of people because I've long been curious as to how good Classical era artists were at this. The problem is, paintings on wood, walls and other material are pretty perishable over two or more millennnia. So aside from Pompeii and some Roman-era Egyptian paintings, few portraits exist from those times.

I find it interesting that in most times and places sculptors did a much better job of depiction than painters. This seems to be true for Roman art if the Pompeii findings are any clue. Were the artists working in Pompeii as skilled as those in Rome itself? Probably not. Pompeii was a resort area before its destruction, so I suppose the painters working there were not much less able than those in the capital.

Another consideration is that the Pompeii paintings were found on walls. Painting on walls is less handy than on boards and canvasses that can be tilted or otherwise manipulated to suit a painter's needs at any given time. That is, wall painting can be awkward and the results might show it.

Many of the paintings displayed in the museum dealt with legendary subjects, so artists often didn't have the constraint of depicting real people. A result is that a number of faces are rather stilted versions of idealized faces seen on Greek and Roman statues. Others display more personality. And of course there is variation in the skill of the painters working in the decades before the AD 79 eruption.

Below are some snapshots I took using my iPhone. Click on them to enlarge. 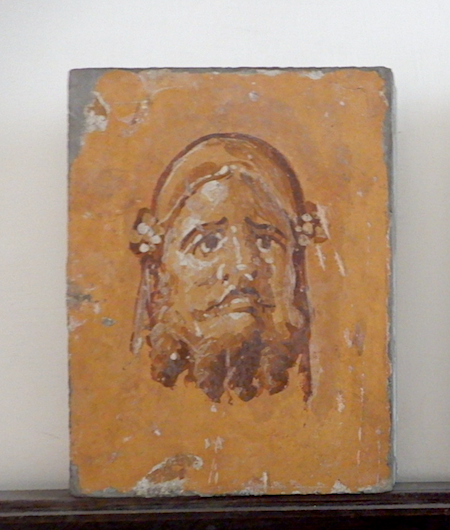 This probably shows a mask, but it has a lot of character. 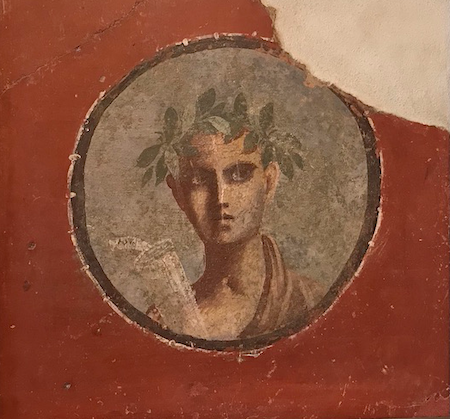 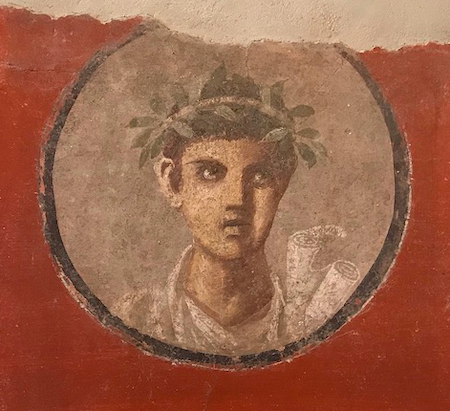 A pair of images showing suspicion. The strong shading is unusual. 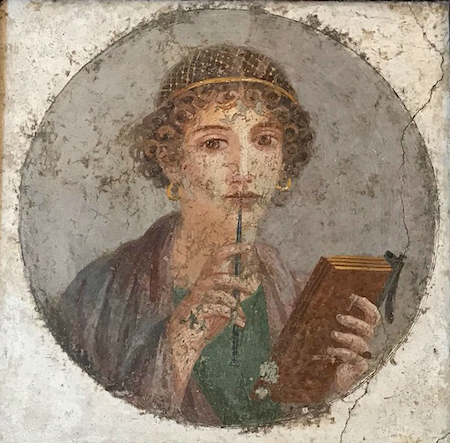 Women almost always were given whiter skin than men. 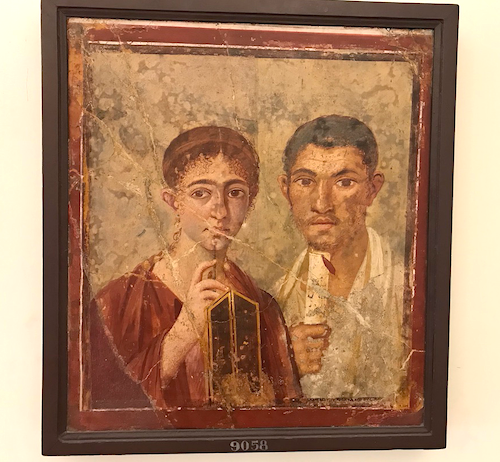 This reminds me of Roman-Egyptian portraits I've seen. 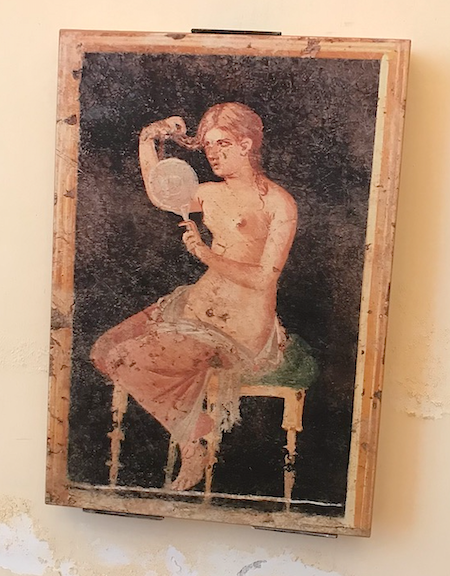 A bit of comedy or commentary here. 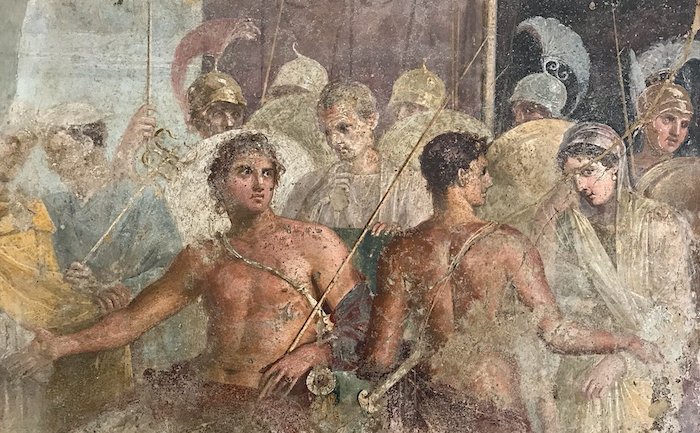 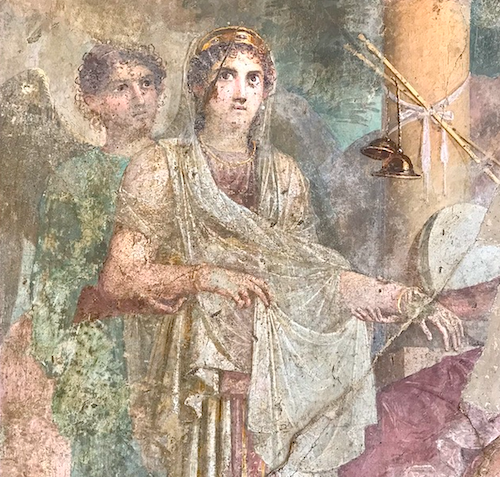 Note the shiny bells on the column. Here and in many of the other images artists exaggerated the size of eyes. 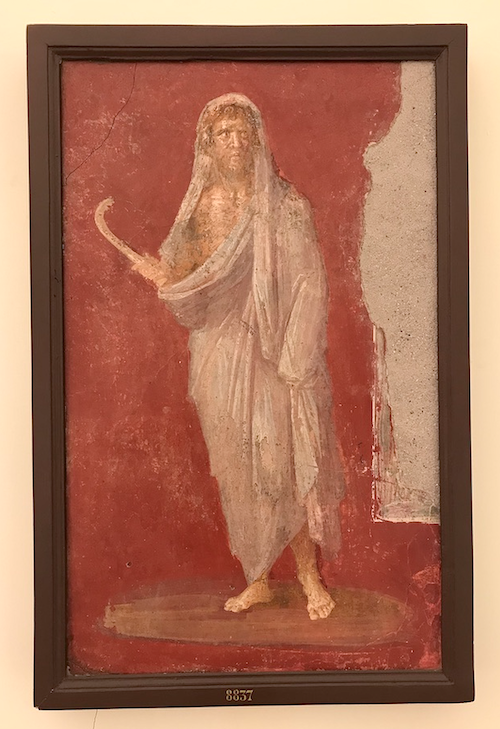 Good work on the man's expression, but he seems slightly off-balance. 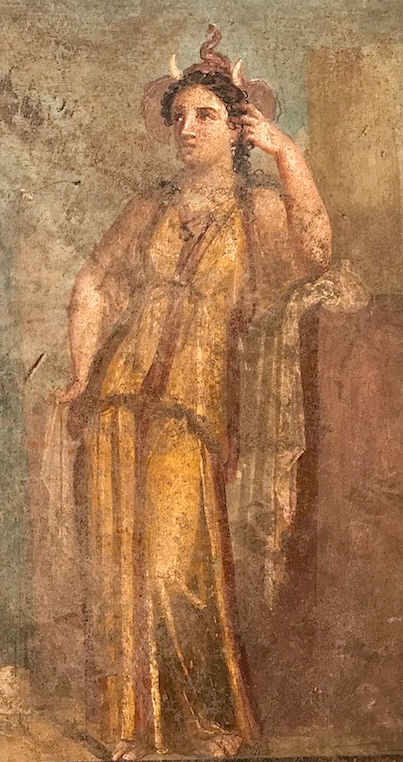 This and some other paintings show that Pompeii artists were able to deal reasonably well with skin tones. 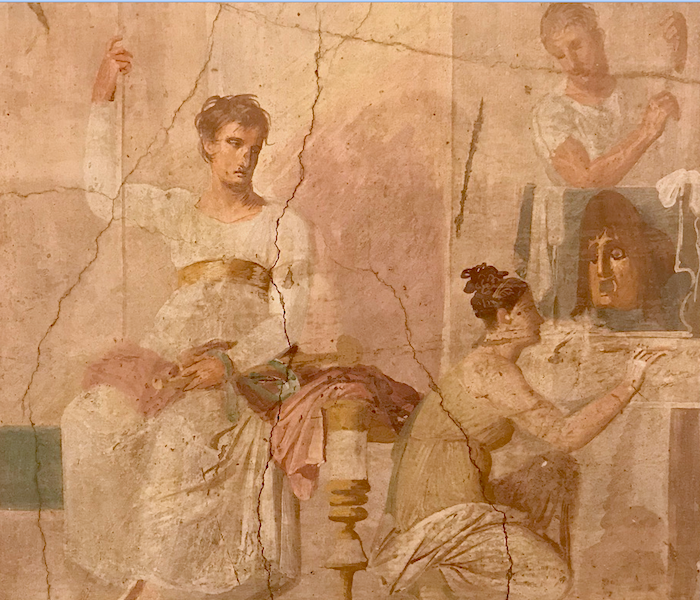 I find the disheveled hair at the left interesting and unique.
Posted by Donald Pittenger at 1:00 AM