Now for a brief shift from graphic art to Industrial Design / Interior Decoration -- subjects I occasionally touch on here.

Aside from two troopship journeys across the Pacific Ocean, I didn't do cruising until I married my late wife. I've been doing it a bit more the last couple of years, though I'm beginning to find cruising not as cost-effective as I'd like. That said, I recently cruised around Italy aboard a ship whose interior design was not what I have come to expect, and I thought I'd pass along a few thoughts and images regarding that.

The ship is MS Pacific Princess, owned by Princess Cruises -- Wikipedia entry here. As the entry notes, it is a relatively small main-line cruiser originally intended for sailing in the South Seas in the area of French possessions. Princess was not the original owner, though has operated it for most of its 20 years.

Shown here off Split, Croatia, is the Pacific Princess. In the background is the Grand Princess -- as it happens, it is the only other Princess ship I've sailed on. The Pacific is about 600 feet (180 m) long and currently carries a little fewer than 800 passengers. Its size makes it handy for entering somewhat restricted ports of call. The Grand, on the other hand, is a typical large cruise ship. Its length is about 950 feet (290 m) and can carry around 3100 passengers. 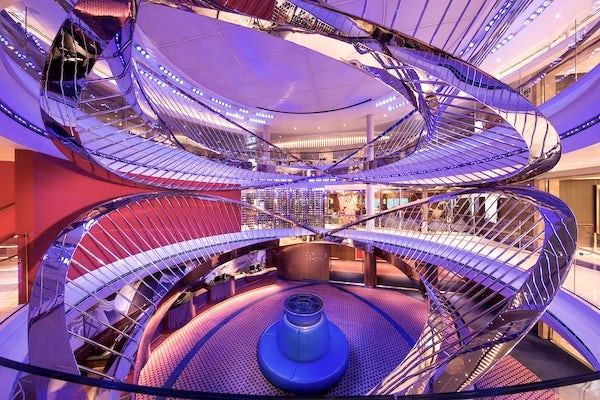 The cruise ships I've sailed on feature interiors of mostly Modernist design. Shown above is the atrium of the new (2018) Holland America cruiser Nieuw Statendam, an extreme example of such décor. 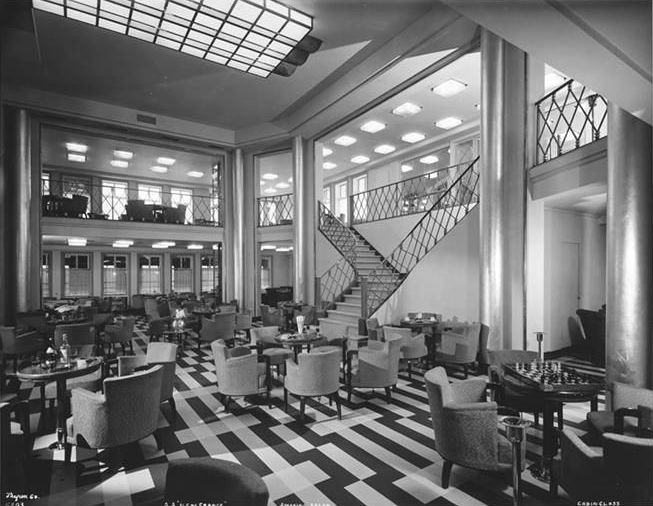 Modernist interiors began to appear by the late 1920s on a few ships. Perhaps the most important example is the French Line's Île de France of 1927. Above is the smoking room in First Class. 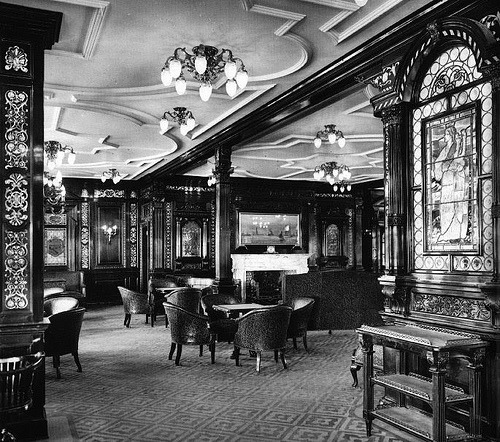 Before that, transatlantic liners featured First Class zone interiors similar to those found in men's clubs or luxury hotels. Given the inhospitable character of the North Atlantic for much of the year, such décor helped distract passengers from the sea and provided a sense of familiarly along with expected comforts. Shown above is the smoking room of the RMS Olympic (1911), sister ship of the Titanic. 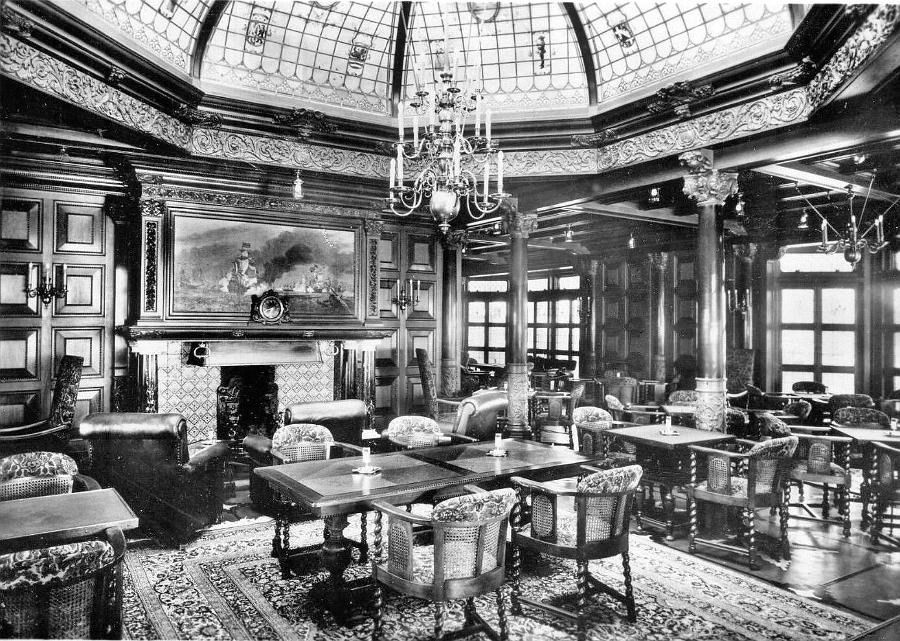 Smoking room of the SS Statendam (1929). Note the ceiling, as something akin to it will be seen below. 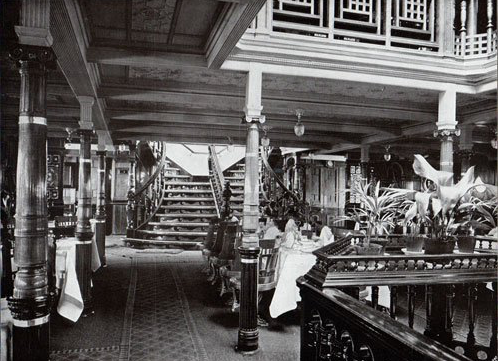 An older ship, the HAPAG SS Oceana of 1890, rebuilt in 1905. Less plush than the later, larger Atlantic liners. 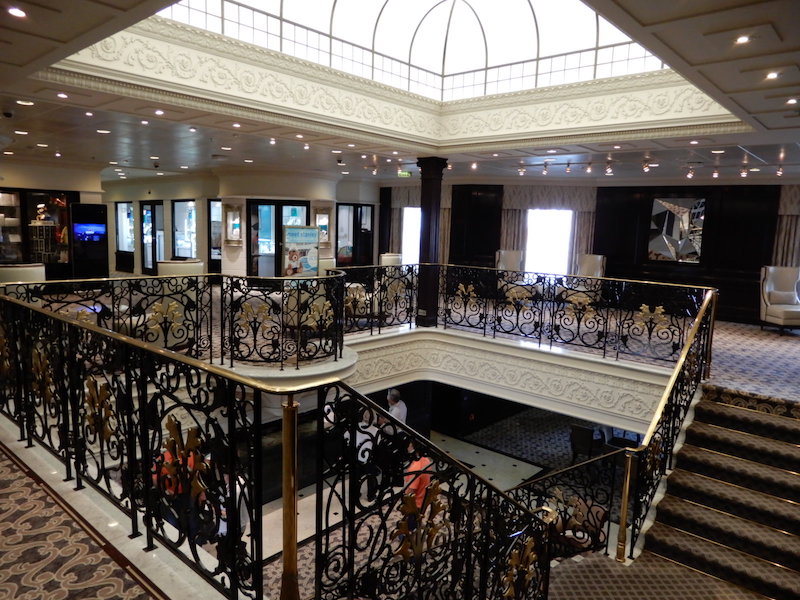 The atrium of the Pacific Princess. I don't know if this was the original décor or if it's the result of a refurbishment. At any rate, the Pacific's public interior spaces featured various pre-1930 steamship interior themes. I found that a little odd when first coming onboard, but soon became used to it. 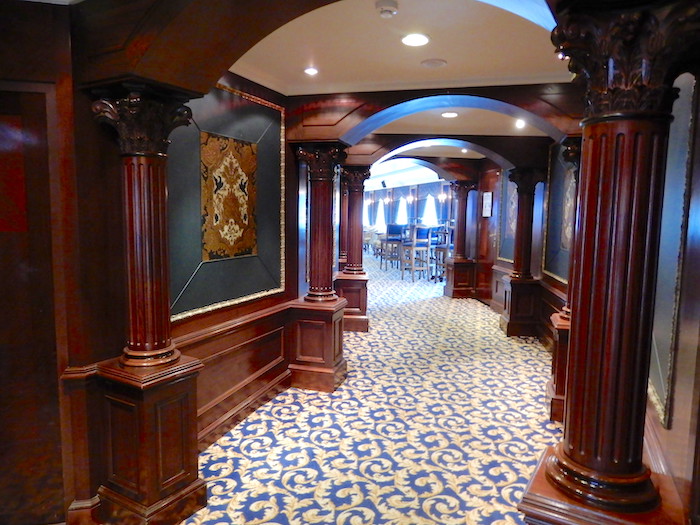 A passageway with lots of heavy, dark wood. 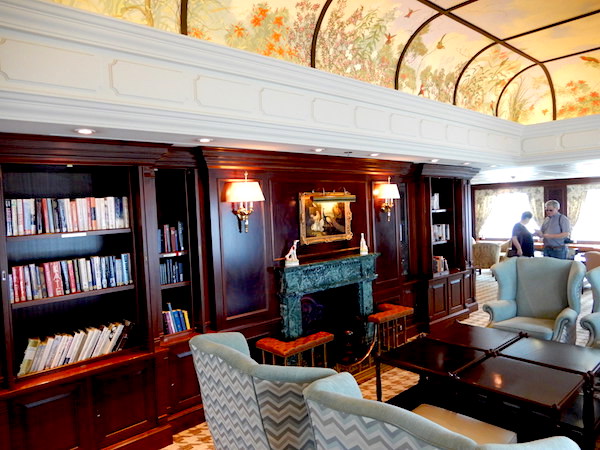 The library.  More dark wood. The ceiling here and in the atrium echo the sort of thing shown above on the SS Statendam and many other classic liners.
Posted by Donald Pittenger at 1:00 AM