Abbott Handerson Thayer (1849-1921) was an important late-19th century American painter.  Also, something of an odd fish, as his Wikipedia entry suggests.

For a number of years he portrayed people as angels.   I wrote about that here.

Thayer seems to have been what is now called "bipolar," suffering extreme mood swings.  By the time of the Great War he had given camouflage a good deal of thought and pushed his ideas on various military organizations.
He also taught painting, though the Wikipedia entry as of the time this post was drafted (February 2021) it was not clear how much of that was done in New Hampshire where he spent much of his time, or in Boston or New York City.  Below is a quotation from Wikipedia in which he informed Thomas Wilmer Dewing about how he worked when students were present.

"Thayer reveals that his method was to work on a new painting for only three days.  If he worked longer on it, he said, he would either accomplish nothing or would ruin it.  So on the fourth day, he would instead take a break, getting as far from the work as possible, but meanwhile instruct each student to make an exact copy of that three-day painting.  Then, when he did return to his studio, he would (in his words) 'pounce on a copy and give it a three-day shove again'.  As a result, he would end up with alternate versions of the same painting, in substantially different finished states."

Below are some examples of his non-angelic works. 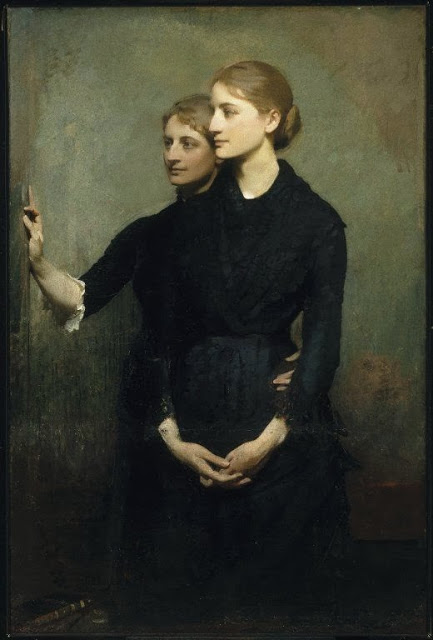 The Sisters - 1884
This is one of the earliest Thayer paintings I found on the Internet.  He was about 35 years old when he made it.  An interesting pose, and the subjects are convincingly rendered. 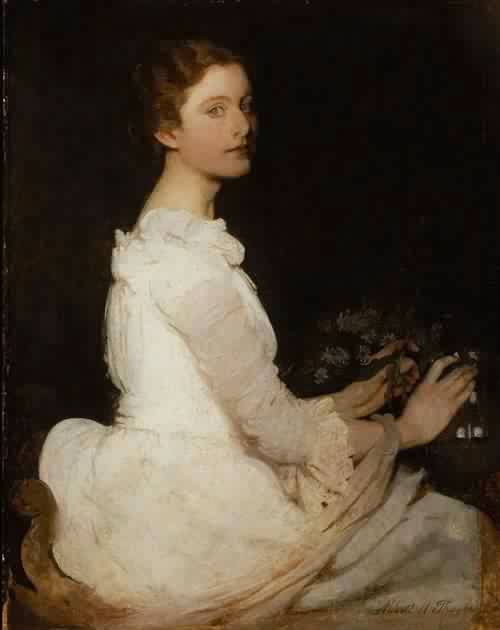 Girl in White (Margaret Greene) - 1888
This was made about the time he was beginning his angels series that lasted until around 1904. 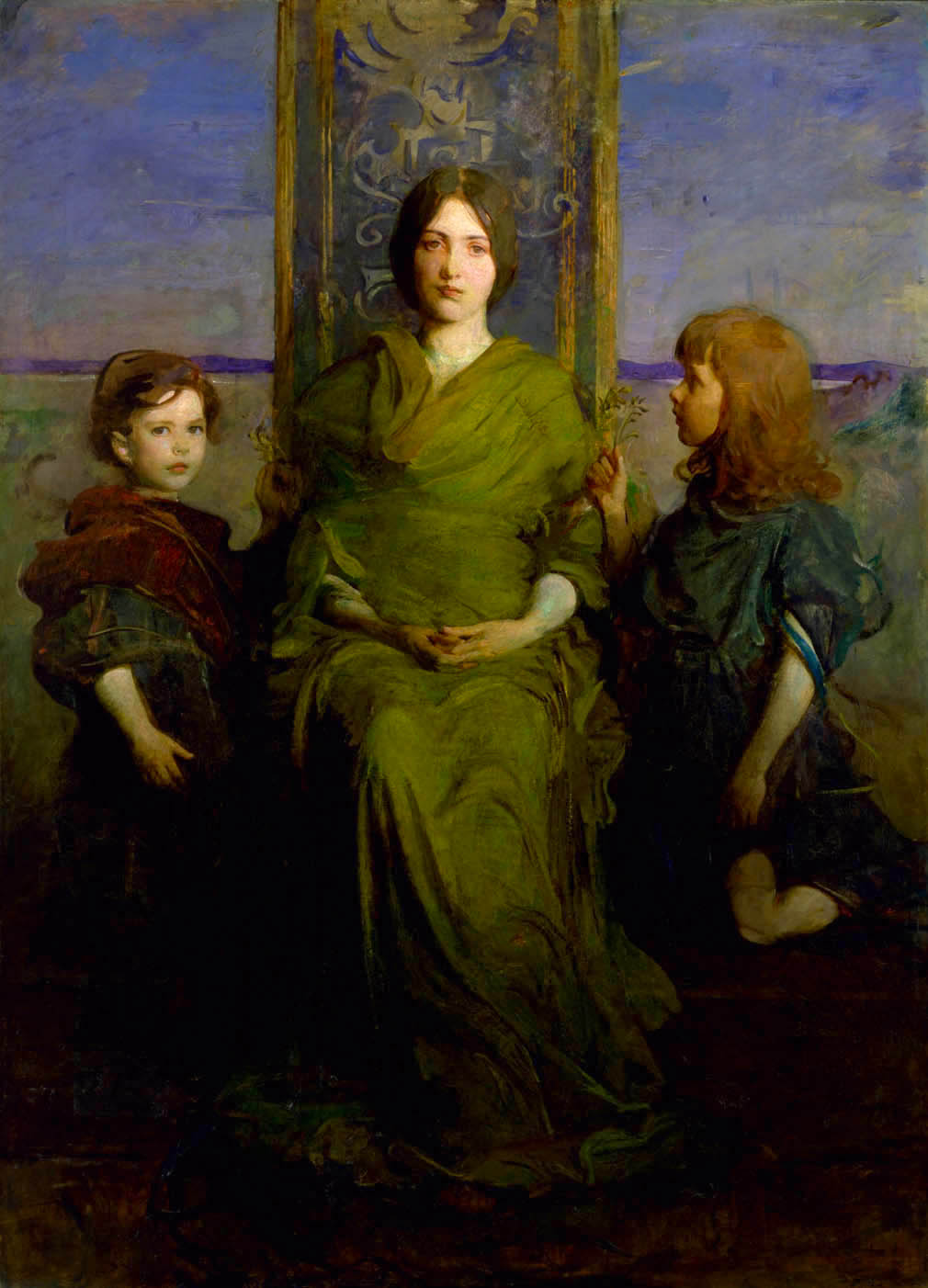 Virgin Enthroned - 1891
He made at least two paintings with a Virgin theme. 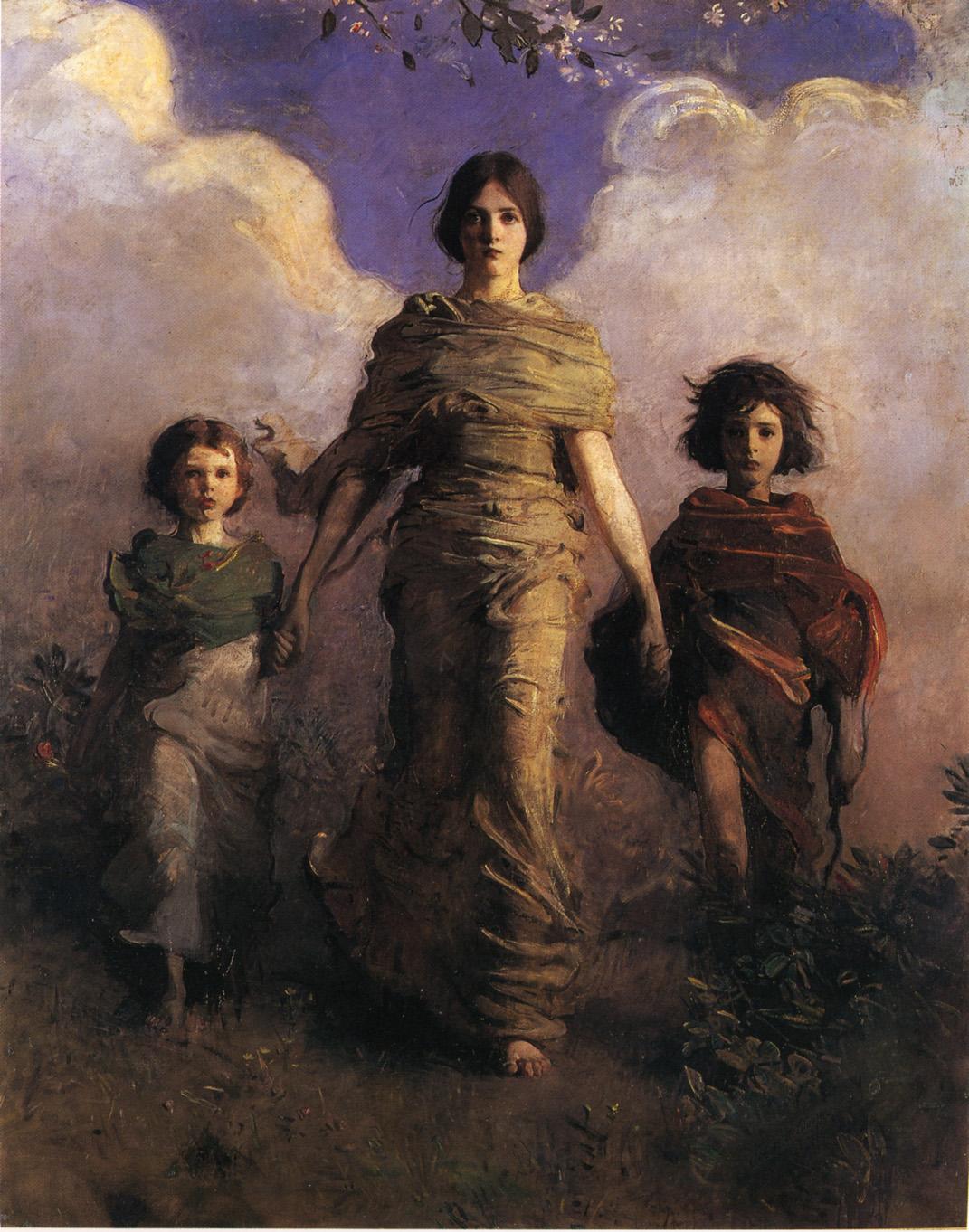 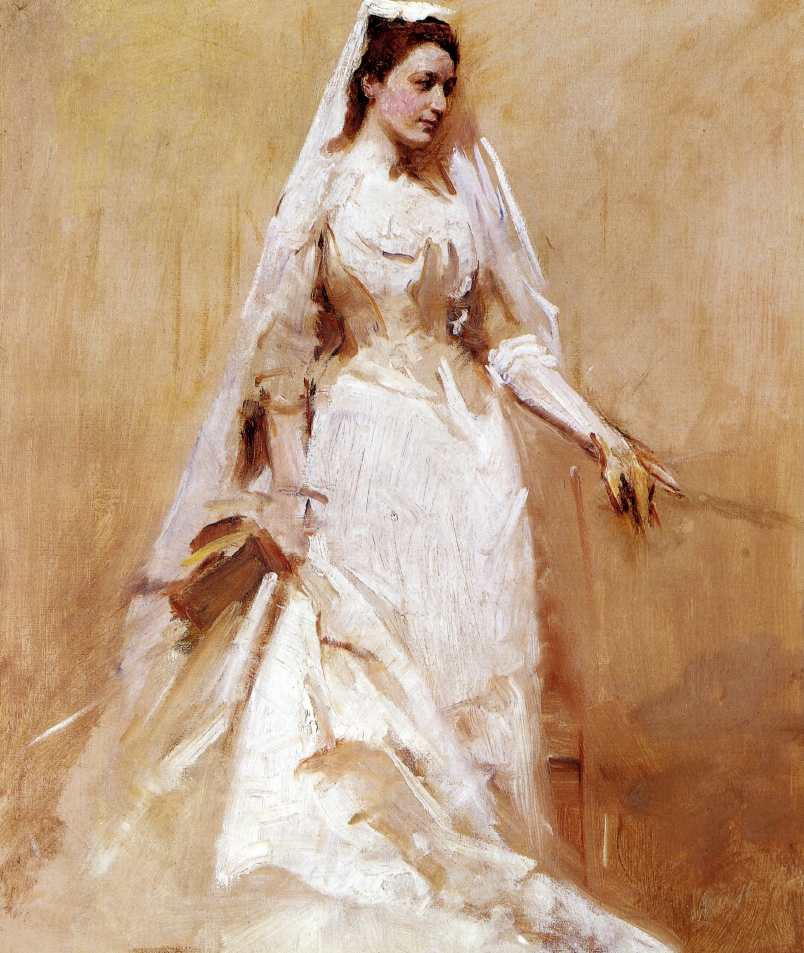 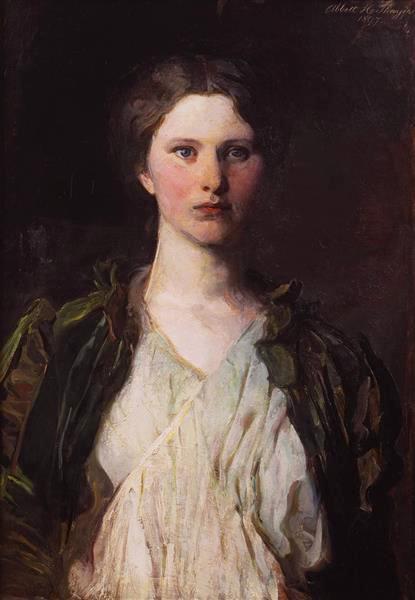 Bessie Price - 1897
One of his models, probably a teenager when this was painted. 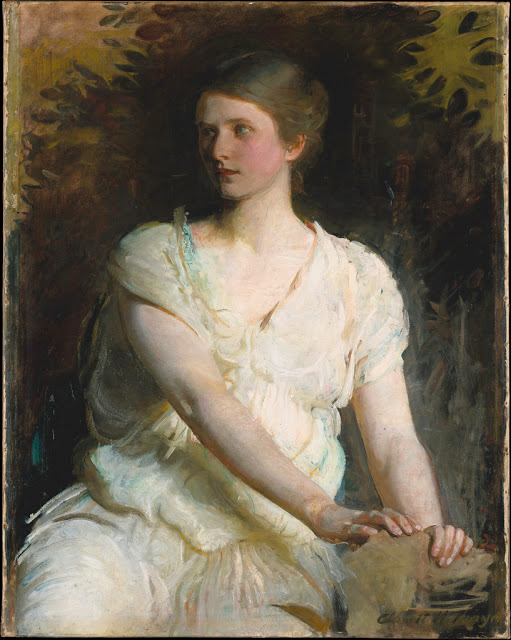 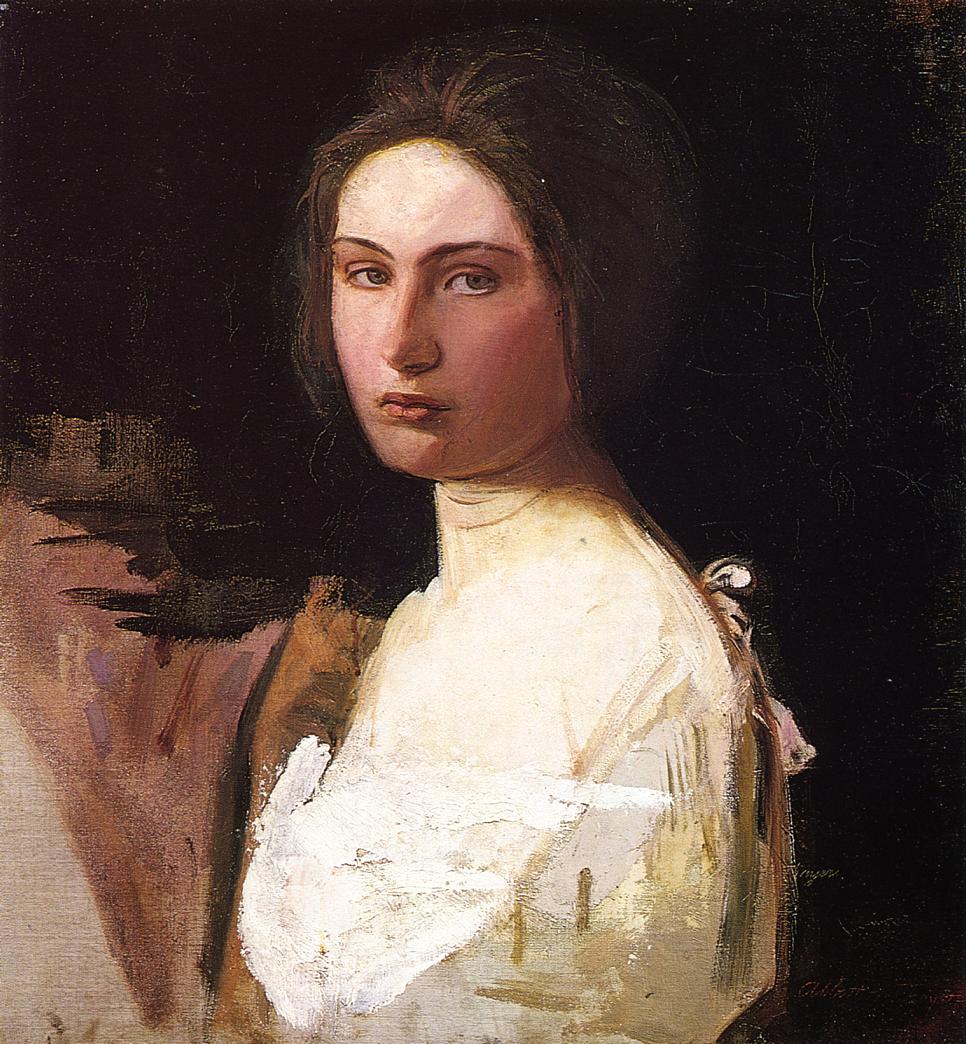 Study of Alma Wollerman - c.1908 (1)
The first of at least two studies of a woman named Alma Wollerman.  For some reason Thayer seems to be having trouble depicting her eyes.  (This was too early to have been influenced by modernists such as Picasso, and I doubt Thayer was very interested in Modernism as practiced in France.) 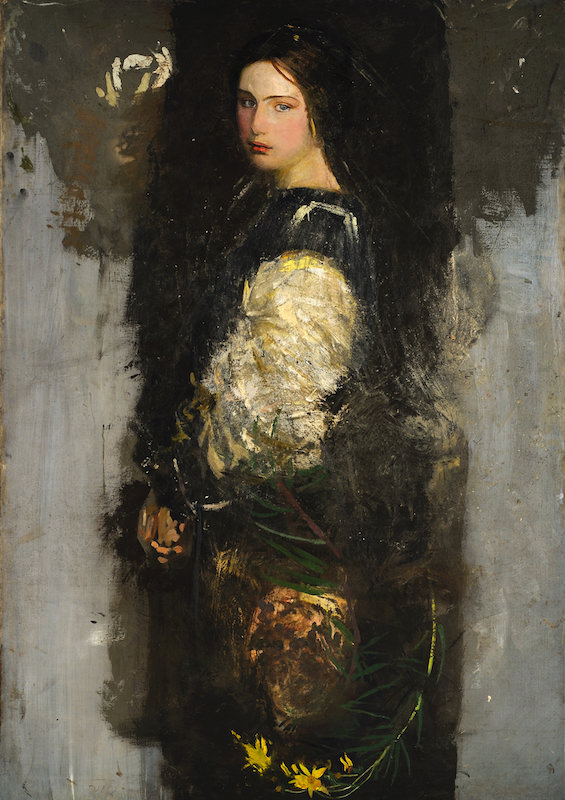 Study of Alma Wollerman - c.1908 (2)
Another Wollerman study.  Again, the eyes are not convincing. 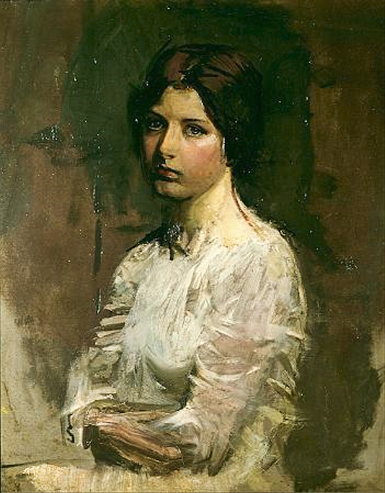 Gladys Thayer - c.1919
Portrait (study?) of his daughter Gladys -- quite roughly done, and again the eyes don't seem quite correct.
Posted by Donald Pittenger at 1:00 AM