Buffalo Before the Bust


A while ago I posted here about Detroit skyscrapers built in the Art Deco era before the automobile industry and, as a consequence, city growth hit the proverbial wall when the Great Depression struck.

Another hard-luck city is Buffalo, New York. Buffalo was home to Pierce-Arrow, a builder of low-production luxury cars, as well as auto industry-related factories. But Buffalo, an important city in 1930, wasn't so strongly tied to one industry. Its main reason for being was that it was located at a major transportation-break point. (That's geographer-speak for a place where goods are transferred from one mode of transport to another.) Such transfers require infrastructure, personnel and a number of support organizations -- in other words, a town will develop there and grow into a city should the volume of transferring cargo become large.

In Buffalo's case, the eastern point of unfettered Great Lakes inter-lake navigation is in the general area of Buffalo. After Buffalo, Great Lakes water plunges over Niagara Falls. (This claim no longer holds thanks to construction, starting in the 1820s, of the Welland Canal through Canadian soil. The canal originally was sketchy and went through two upgrades before the present canal was opened in 1932. Ships can steam from Lake Erie to Lake Ontario via the canal and its system of locks. But before the canal, Buffalo was as far as ships could shuffle off to.)

So Buffalo developed a harbor for Great Lakes ships. On the land side of the equation, the Erie Canal (later the New York State Barge Canal) was opened in 1825 followed by railroads a few decades later. Great Lakes cargo would move from ship to barge or rail car -- or vice-versa -- and Buffalo thrived. Over time, other industries developed; for instance, besides automobiles, by the 1930s Buffalo was an important builder of aircraft (Consolidated, Curtiss and Bell were based there at various times).

What finally brought Buffalo to its economic knees was the opening of the Saint Lawrence Seaway in 1959 that, at a stroke, drastically reduced transportation-break volumes. Subsequent attempts to turn the regional economy around didn't meet with much success and the city drifted from being a headquarters to a branch-plant town.

So much for background. Below are four important Deco-era structures of architectural interest that you can witness if you find yourself within striking distance of central Buffalo. 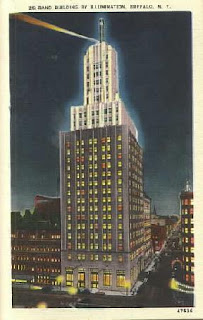 Postcard of Rand Building - 1929
The Rand Building is the least of the lot from a design standpoint. But it's tall and contributes to the city's character. 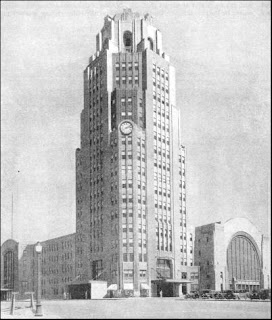 New York Central Terminal Complex - 1929
In the late 1920s the New York Central Railroad decided to rationalize its Buffalo facilities and created a major terminal not far to the east of downtown; other railroads also used it. The problem was that it was too large. I suppose the folks at New York Central extrapolated rail traffic and urban growth trends to support the case for such a large station. However, setting aside the Depression, rail passenger traffic had begun to peak as potential passengers shifted to cars, intercity buses and, later, aircraft to get around. After World War 2, traffic fell off alarmingly and the terminal complex became increasingly irrelevant. 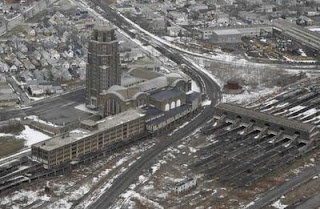 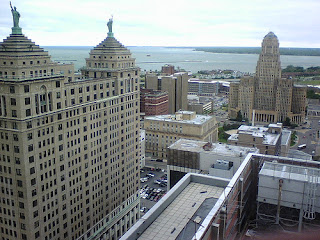 Liberty Building - 1925 - as viewed from the Rand Building
Those short towers (do they really qualify as towers?) are the most distinctive architectural features. Atop each is a small version of the Statue of Liberty. The scene in the picture is of interest because the relationship of downtown Buffalo to Lake Erie can be seen. Also, note the large structure between the Liberty Building and the lake: it is ... 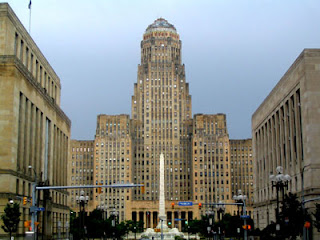 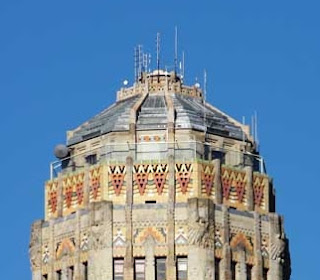 City Hall tower detail
The whole building is interesting, but the hard-to-see-from-the-ground top is a nice touch indeed.

Posted by Donald Pittenger at 3:04 PM

There is a fleet of ships operating on the Great Lakes (except Lake Ontario) which are too large for the Welland Canal's smallish locks, and which therefore cannot go east of Buffalo.