When I was blogging at the late, lamented 2Blowhards site I'd occasionally post about political bumper stickers. One subject was a Prius in northeast Seattle that had its rear pretty well covered. Because I drive past its home fairly often and kept seeing it, the idea finally flashed that it might be interesting to photograph the car once a year to show if there were any additions or deletions inspired by changing political winds.

Carrying on the tradition, herewith is the 2010 Prius bumper sticker update. 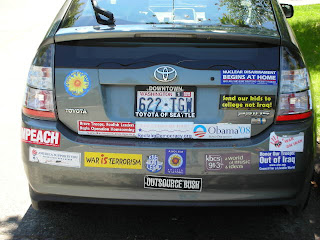 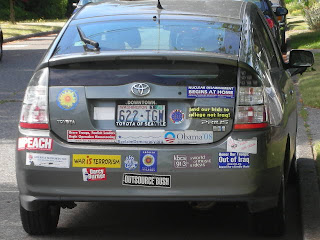 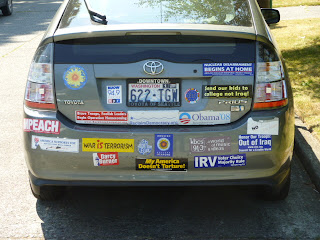 
Seattle is a solidly liberal town, so most cars I see with political stickers display messages from that part of the spectrum. The images are a little fuzzy, but they can be enlarged enough to read most of the print by clicking on them (this works with my iMac, anyway).

There was minimal change between presidential election year 2008 and off-year 2009. A European Union sticker was added to the right of the license plate and one for the Democrat running for Congress in district WA-8 toward the lower edge of the bumper; this probably was affixed in the fall of 2008 before the election (she lost).

New for this summer are a sticker for the NPR radio station (to the left of the license plate) and the blue one at the lower right with the word IRV (I'm not sure what it's about). The "Outsource Bush" sticker in the lower center of the bumper has been replaced by one stating "My America Doesn't Tourture."

My take is that the owner isn't nearly as agitated as he was when the car was newer and most of the stickers appeared. Apparently he's content with Democrat control of the White House and dominance in both houses of Congress -- expected sentiments. I do find the anti-torture sticker a little puzzling because that issue faded with the election of Obama.

I will continue to monitor the Prius and report any startling changes.

Posted by Donald Pittenger at 4:36 PM

Here's a bike that would take stickers.
http://www.howtobearetronaut.com/2010/08/the-spacelander-electric-bicycle-1946/

How you would conduct a reverse license plate number check up? I would like to know if there is any sort of way you can type in a license plate number on-line and see the name of the individual if it is associated to or perhaps the address of that individual. Can anybody assist me? It is an Illinois plate with S in the end of it. Please email me if you're able to investigate or post if you know how you can do a totally free one. Thanks very much.

These bumper stickers are the way of car owner to express his political views.