The well-used expression "timing is everything" usually refers to something relatively short-term. But sometimes timing can be a matter of generations, as is the case with the subject of this post -- the pulp fiction hero Doc Savage. 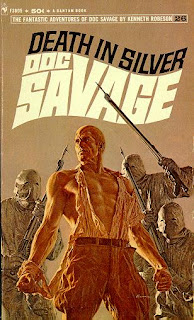 Back in the 1970s and 80s I noticed a steady flow of Doc Savage paperbacks sporting James Bama covers such as the one shown above. I assumed it was some new sci-fi series and paid it no attention other than to wonder about the odd hairstyle Bama created for Doc. At any rate, I never bothered to buy any of the books. Such is the bliss of ignorance.

What I didn't know was that the Doc Savage character first appeared in the early 1930s in a pulp magazine series that ran till the end of the 1940s. When the series ended I was still reading comic books, never considered buying any kind of pulp (though the crime oriented ones with scantily-clad babes on their cover began to fascinate), and on the cusp of discovering science-fiction.

So timing-induced ignorance it was -- born too late to experience Doc in the original and too late to discover him in re-release (to do the latter, ideally I should have been a teenager). 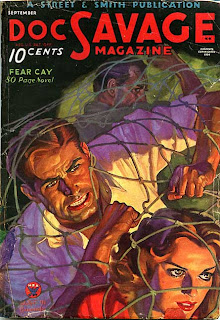 I began my discovery of Doc Savage through my interest in Baumhofer's work even though I was familiar with Bama's career and Doc Savage covers. In the last few years I noticed a new series of reprints featuring the Baumhofer covers. When some of these trickled down to $2 remainder status items at a local cut-rate bookstore I bought a few to find out what this Doc Savage stuff was all about.

The "author" of the Doc Savage series was "Kenneth Robeson," a pseudonym created by the original publisher as cover for a number of ghost-writers who might be needed over time if the pulp series became successful. As it turned out, most Doc Savage adventures were either written by or under the scrutiny of Lester Dent, who offered yarn-spinning advice here.

Doc Savage is a highly improbable version of a human being. Trained by his father to grow into a large muscle-machine with instant reflexes and five senses that operate at near-ultimate capabilities, he holds a medical doctorate degree and invents lots of keen stuff to assist him in his crusade for justice in particularly bloodthirsty corners of the world including New York City. He has offices on the 86th floor of an anonymous NYC skyscraper and a nearby warehouse stuffed with a submarine, other water craft, a variety of special cars and trucks, several high-speed amphibious aircraft and other goodies I've yet to read about. This is funded via a precious metal mine in what once was the Mayan empire. From time to time Doc radios a request (speaking a Mayan dialect) and the locals collect and caravan out enough to keep Doc's operation humming.

Naturally Doc is too busy solving crimes, inventing things, doing his daily two-hour regimen of exercise and sense-enhancement training to pay much attention to women. But he doesn't chase after guys either. That's the way heroes of literature operated back in those days. Adventure readers -- especially teenage ones -- wanted lots of action and heroics; smoochy stuff was for the romance pulps that gals read. Also, Doc was pretty short on introspection, again unlike how a 21st century hero might be concocted.

Therefore, to my eyes Doc Savage is unbelievable as a real person. To most 1935 readers older than 18 or 20, he probably seemed off the charts as well. But the whole point of Savage and similar characters is that push beyond all reasonable limits of reality. Just sit back, relax and wipe out the cares of the day with a dose of Savage and his improbable adventures.

Posted by Donald Pittenger at 3:54 PM