Lucian Freud: An Appraisal Upon His Death 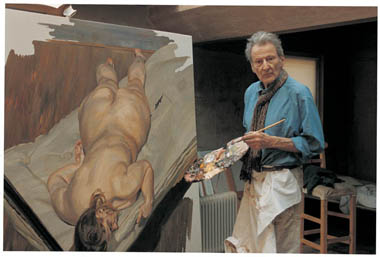 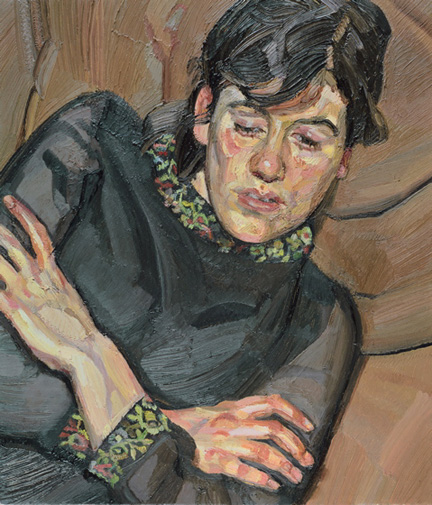 I've been dithering and dallying for a long time about writing a post on English painter Lucian Freud (1922-2011), grandson of psychoanalyst Sigmund Freud. Seeing as he upped and died a few days ago, I'm running low on excuses: so here goes.

His Wikipedia entry is here and the Telegraph's obituary here, the latter being quite interesting. The image sites in Google and Bing have plenty examples of Freud's work, though perhaps not many of the gamiest of his "spread shots" of male and female nudes; for those, you'll have to go to a bookstore with a good collection in its art section. The top picture above the text shows him at work on an uncharacteristically smooth painting of a nude, the lower shows a 1981 painting of his daughters Bella that provides a view of how he treated skin during his mature period.

What to make of Freud, the artist?

His career was successful. That's a good thing so far as I'm concerned; posthumous recognition is no comfort to a dead artist. He painted representationally. I find that good, too -- especially in an age when the artistic/cultural establishment dismissed that approach.

So how did this representational painter manage to forge a successful career running against the art fashion grain?

For one thing, his family name must have helped some. It caught the attention of art opinion leaders. It opened doors for commissions.

But what I think really mattered is that, aside from some landscapes, the art he produced is ugly. Modernism, especially in its postmodern guise, loves ugly. Ugliness and its cousin edginess somehow make art more "serious" than that old-fashioned, rather silly pursuit of beauty. And what is beauty but a social construct forged by an evil establishment (not to be confused with our humble, worthy, postmodern art establishment).

So Lucian Freud actually didn't stray all that far from the postmodern corral, cranking out ugliness in spades, painting after painting of overweight, over-aged or sometimes skeletal human figures, often nude with blotchy skin and sex organs the center of attention. On occasion he might feature a more conventional looking female nude in a painting and he most certainly favored such women in his personal life. But if you need to maintain your lifestyle in the age of postmodernism, you have to keep producing what sells.

It would have been interesting if Freud had made a stronger effort to get out of the stylistic rut that gained him his notoriety. To make a beautiful painting, for instance. If he could.

Posted by Donald Pittenger at 2:34 AM

"If he could": cruel and necessary punishment.

I thought the same thing. As I've been seeing the many tributes to him I keep saying to myself, "but everything is so ugly!"

Perhaps if he'd seen a psychiatrist ...

Sorry. Someone had to say it.

You missed the mark on this one, Donald. Freud's paintings are beautiful. Few painters share his palpable love and passion for painting flesh, for telling the story of the human form, and for staying true to his work in the face of fads and pressure to "pretty up" his work or align more with postmodern trends. And despite a flood of offers, he did not accept commissions for portraits -- he approached his subjects if he found them compelling enough to paint. The art world lost a giant when he passed.

Tim, you may be the only one whose sense of beauty encompasses Freud' celebration of ugliness.There were two artistic phenomena, Perlstein and Freud with similar effect.Perlstein, who painted people as if a glimpse at the morgue of corpses in formaldehyde and Freud, who presented a human abattoir,truly scary, dehumanizing and therefore loved by modern art critics.

Henryk, how you feel about Goya? What about Rembrandt? Have you seen Freud's paintings up close? They are sculptural, visceral, filled with life, and yet beautifully mortal (perhaps this is "ugly" to you?). Few have been able to capture this combination with paint. What figurative painters do you admire, my contrarian friend?

"beautifully mortal" sounds very moving and surely every viewer would be affected by such images.In Freud's oeuvre I see "flaunting ugliness" ,as if he reveled in bringing to us that Revelation according to Lucien.Certainly there is ugliness around,physical decrepitude and painters sometimes were showing it.Brouver and Ostade come to mind-but their village louts are actually harmless,even endearing bits of local color.Freud , as you say is "visceral" like an enthusiastic torturer showing viscera of his subjects.His grandpa was a crafty quack and grandson became an apostle of Ugliness.