Many American suburbs sprang up shortly after World War 2, with nearly all houses in place by around 1950 as growth spread farther out. Since many houses require major repairs and upgrades to wiring and other infrastructure by the time they're around 40 years old, not to mention expansions, kitchen and bathroom re-dos and so forth, one can see three or four major renovation projects going on every year in these neighborhoods.

Sometimes a house is razed and a new one put in its place. Then there are cases where the work done is legally a renovation yet the scale is such that it might as well have been a completely new house. Here is an example of the latter.

What happened was that all of the old building was ripped out aside from the rear outside wall -- that remaining fragment of the original building legally qualifies it as a renovation of an existing structure. The foundation was extended towards the street. Then new walls, floors and other parts were brought to the site and installed. I assume that many measurements were made and final plans for the prefabricating were done on a computer, with initial fabrication taking place on a smooth, concrete floor somewhere.

So far, that's okay with me. But let's take a look at the result in this particular case: 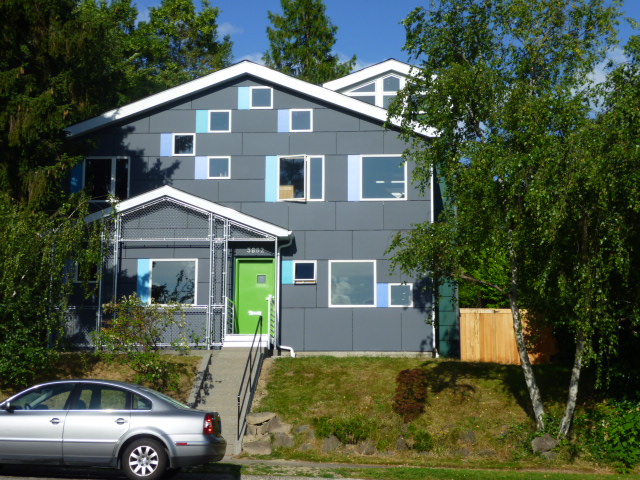 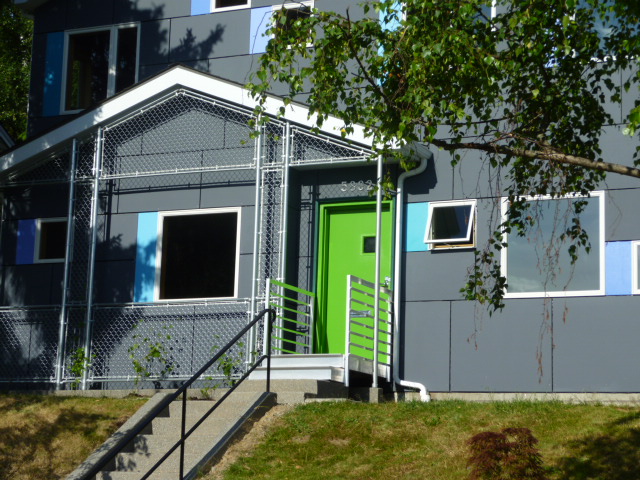 Note the odd, gray panels covering the exterior (to the right, there's an observation tower clad in green, but it's hard to see in the photo). Then there are windows that don't quite seem to relate to probable interior spaces; their placement seems designed from an exterior point of view. Even sillier are those light blue faux half-shutters.

The close-up shot of the entry area shows the metal posts and chain-link fence decor around the tiny porch.

The homeowner of course bears ultimate responsibility for the result because he had to okay the project. But did the architect (I'm assuming there was one if the owner didn't do the design work himself) convince the owner to accept a line of trendy archi-blather filled with terms such as "integrity to materials," "eco-friendly," "in synch with industrial-chic" and whatever other nonsense architectural theoreticians are throwing around these days?

Regardless of its architectural pedigree, I consider the house an unfortunate intrusion to its neighborhood.

Posted by Donald Pittenger at 2:29 AM