Gertrude Stein famously said regarding Oakland, California that "there is no there there." If you consider Oakland's context in the Bay Area setting and when she last lived there (1903), she might have had a point. (These days, I think the East Bay towns of San Leandro, San Lorenzo and a few others along the flats could be more aptly described thus.) But even today, if you exclude the part of Oakland in the hills and perhaps the part around Lake Merritt and bits of downtown, her point still holds.

One positive Oakland item is the fact that its Oakland Museum of California has a good collection of works by Arthur Frank Mathews (1860-1945) and his wife Lucia Kleinhans Mathews (1870-1955). Their paintings, picture frames and other objects might be pigeonholed as Art Nouveau or Tonalist and clearly seemed old-fashioned during the 1950s when the classical phase of Modernism reached its peak of influence. Now that we are a century away from Arthur Mathews' heyday, his art is oddly compelling, perhaps because it is utterly lacking in irony, transgressive statements, snide cultural references and whatever other characteristics are honored these days by the Art Establishment.

A brief Wikipedia entry on Mathews is here and another short biographical piece is here. A checklist of his mural work can be found here. There's even something I wrote regarding Mathews several years ago here.

Let's take a look at some of his paintings (click to enlarge). 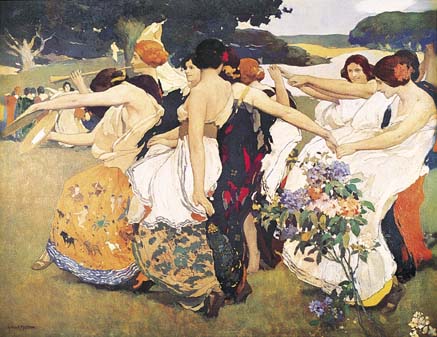 Youth - c.1917
Although he painted a variety of subjects, Mathews might be best known for his images of dancers. 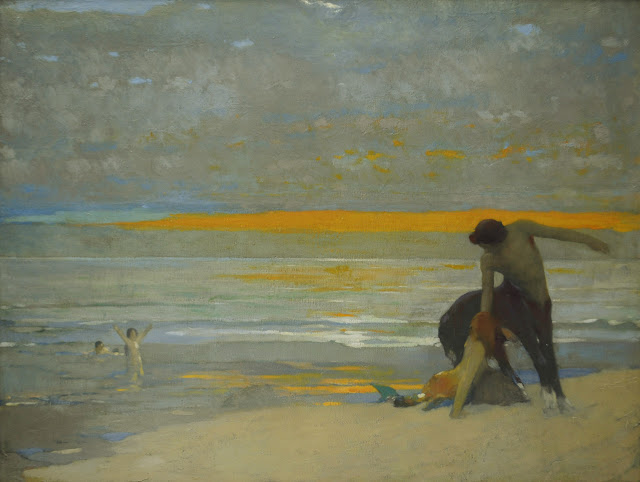 Centaur and Mermaid on a Beach at Sunset
He did on occasion draw on mythology, as seen here. He also did historical paintings, the most important being murals for the state capitol building in Sacramento. 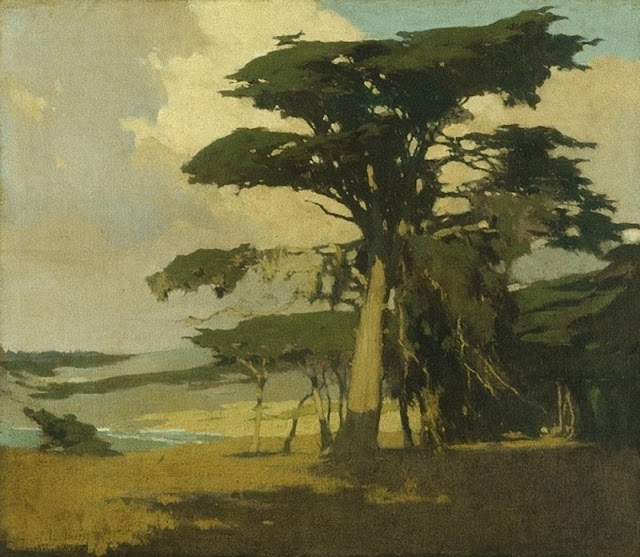 Afternoon Among the Cypress - 1905
Then there were landscapes, many of which featured cypress trees. 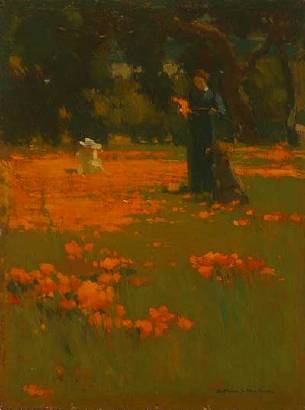 Scene with orange poppies
Mathews studied at Paris' Académie Julian 1885-89, so might have been aware of paintings of poppy fields done by Claude Monet in the late 1870s. 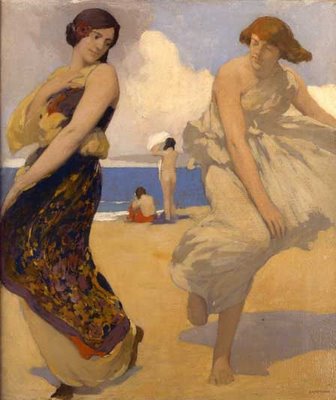 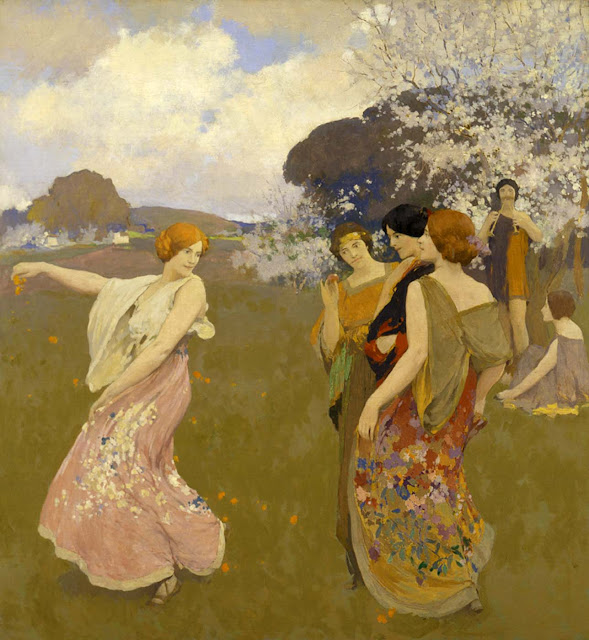 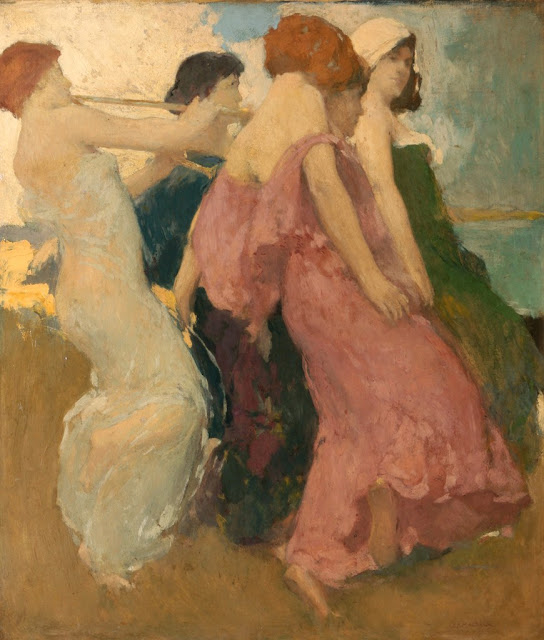 The Dancers
Young women donning flowing robes and dancing as ancient Greeks supposedly did was a fad on American college campuses in the early twentieth century; plenty of old college yearbooks have photos that attest to this. Mathews was surely aware because the University of California (in the years before other campuses were added) was at nearby Berkeley. 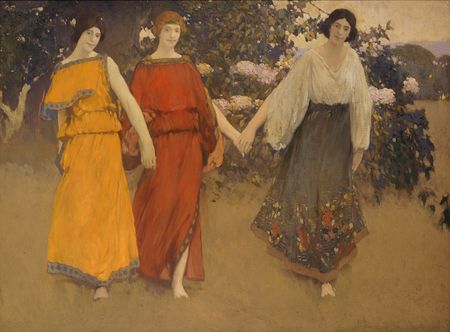 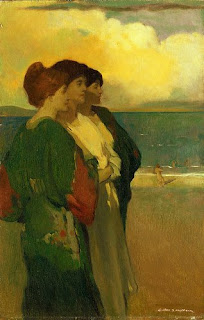 Three women gazing
Not the same women, and none are dancing, either. 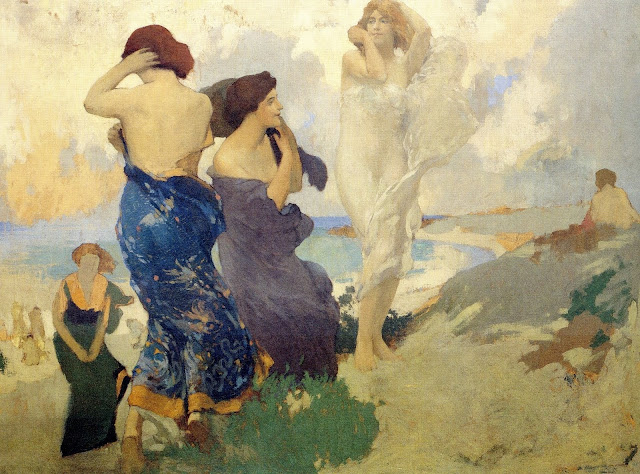 Apparently unfinished painting
I don't know if this was a mural or an easel painting. Some of the background figures are unfinished. Mathews at this time (1915-20?) seems to have blocked in the main elements -- clothing, faces, etc. -- and then worked in shading and details.

"his art is oddly compelling": I find it oddly repelling. Could it be because it carries an echo of the pre-Raphaelites?

Thank you for posting this. I was unaware of this artist's existence. Now I'm going to look him up.