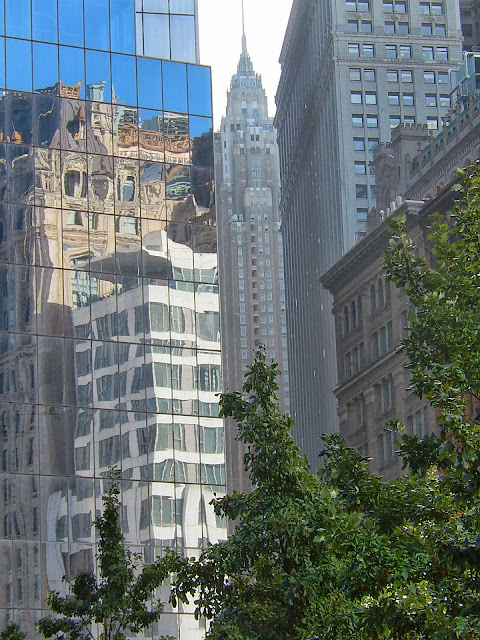 I spent nearly ten years of my life within striking distance of New York City. But I've seldom been there since around 1990 and my touch with the place is pretty well lost.

One advantage to seldom visiting a city is that changes that might be too gradual to perceive by residents can be clearly seen. I was in New York for part of a day recently thanks to an unwanted layover on our return flight from Paris and was able to stroll a segment of Fifth Avenue, among other streets. And I indeed noticed changes.

What I noticed was that Fifth up to around 55th Street was no longer so ritzy or upscale as it was in the 1960s and before. Back then, there were nice stores along that stretch such as Bonwit Teller and Scribner's bookstore. These have been replaced to a considerable degree by the likes of H&M, a retail chain featuring budget-priced clothing. Shops in Rockefeller Center facing Fifth Avenue now include Bananna Republic, which features moderate-priced clothing. Other nice stores in the upper 40s have been replaced by souvenir shops and other socially lesser forms of retail.

What this seems to represent is the continuation of a long-term geographical trend whereby fancy stores gradually migrate up Manhattan Island, mostly along or near Fifth Avenue. But the Fifth Avenue retail zone is blocked on the north by Central Park. So outlets for Hermès and its likes above 59th Street can be found over on Madison Avenue rather than Fifth.

Unfortunately, my time in New York was far too limited to allow a more systematic exploration of parts of Midtown that I used to know well.

And as for the photo at the top, it's one I took in lower Manhattan near the World Trade Center site.
Posted by Donald Pittenger at 1:00 AM

One of my most-missed casualties of the downward transformation of Fifth Avenue, is the marvelous old Nat Sherman tobacconist just across 42nd Street from the library. What a brilliant Old New York building, full of wood panels and leather furniture and, of course, tobacco. The place was redolent of both unburnt tobacco and smoke. Cigars, cigarettes, pipes.

Of course such places and their contents are frowned upon nowadays.