Impressions of the Musée d'Orsay Renovation

The Musée d'Orsay was partly closed for renovation the last time I was there, July 2010. It reopened in the fall of 2011, but I didn't get to see the results until last month. Moreover, I was focusing on the paintings being exhibited rather than where and how they were presented, but that doesn't prevent me from tossing out my two-bit reactions for all to read.

A detailed report regarding the renovation is here, and interested readers should scan it to to get an idea as to what was done. 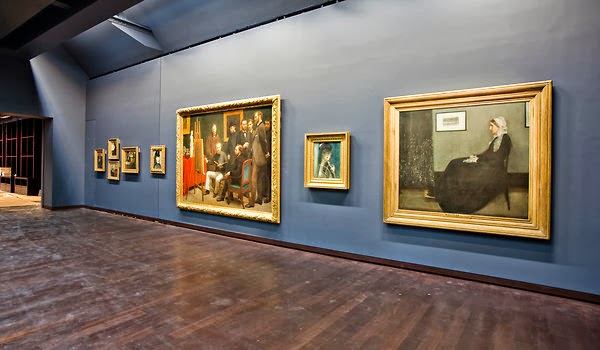 Photographs of any kind was not permitted, so the above image was grabbed from the Web. It shows the grey walls that the linked article was unsure of. I was aware of the change in background color, but it didn't bother me. And it was probably an improvement over what was there before.

On my 2010 visit to the d'Orsay, the staff had made their best effort to have the most famous items in the collection on display. That visit sticks in my mind more than what I saw saw in 2009, the previous time I was there. What this means is that what follows as a comparative perspective might well be in error. But this is professional blogging, so content flow trumps all -- and here I go:

I am not a huge fan of hardcore, Claude Monet style French Impressionism, which means that I might not have been paying as much attention as I should. But my impression of the Impressionist galleries is that a lot more works were on display than pre-renovation. For some reason, I was especially aware that a good number of Monet's early paintings were on display -- the sorts of things I especially noticed when visiting the Musée Marmottan when I was there years ago.

Fortunately for me, the d'Orsay still devotes a generous amount of space to artists outside the Art Establishment approved historical timeline to Modernism. To be found are academic works including several Bouguereaus, Orientalism, Symbolism and other interesting species of paintings from a time when uncertainty began to dominate the world of art. I took notes on what caught my attention, and these will serve as starting points for some future posts here.

So far as I am concerned, the Musée d'Orsay continues to be the don't-miss Paris art museum.
Posted by Donald Pittenger at 7:05 AM

I suppose it depends on, not only the timeline of modernism but also the definition. For example, if there is a decision to include everything after a fixed date eg 1870, then it wouldn't matter if the paintings were traditional or revolutionary.

I love a lot of Orientalist art which was usually extremely beautiful but it was hardly going to shake up the anti-modernists.

Hels -- The d'Orsay does have a time frame of about 1850 to 1900 or shortly later. Plus, there is the trove of French art purchased by the state back when it was new. So even though Impressionism and Postimpressionism are the big draws, the curators are kind enough to display plenty of the rest, when the Modernist Establishment might not be totally happy with that. Maybe French Glory trumps Modernist ideology.

Oh, and there's Orientalist painting on show as well.