That Skirt probably was one Richard E. Miller's wife eventually cast off, and he thought it would be suitable for dressing models. Or not. I'm only guessing, and so will have to wait (for a long time, I suspect) for a good biography to appear that might clear up that detail. For now, there's this Wikipedia entry that covers the basics regarding his life and career.

Below is a collection of his images that I found here and there on the Internet where the model is wearing what appears to be the same skirt. Where the images were dated, the range is from around 1912 when Miller was living in the American artist colony in Giverny (near Claude Monet's house) or elsewhere in France, through the 1920s into the 1930s, a time when he lived in Provincetown on Cape Cod. I am not sure dates for paintings that I found on the Web are all accurate, but suspect they are not far off. The models' coiffeurs are usually based on long hair, something not fashionable during much of the 1920s, so most of the undated images are most likely from the previous decade. And the titles of the paintings? I'll use title format in the captions if that is what the source had; otherwise, I'll write a title as a sentence.

Moreover, I don't know who Miller used as models. One might well have been his wife, but I can't seem to find a photo of her, so that can't be confirmed. Perhaps some of the women in the early paintings were Giverny locals or wives of other artists. The same might be the case for Provincetown.

Setting aside that patchy background, let's take a look at some of the many appearances of That Skirt. 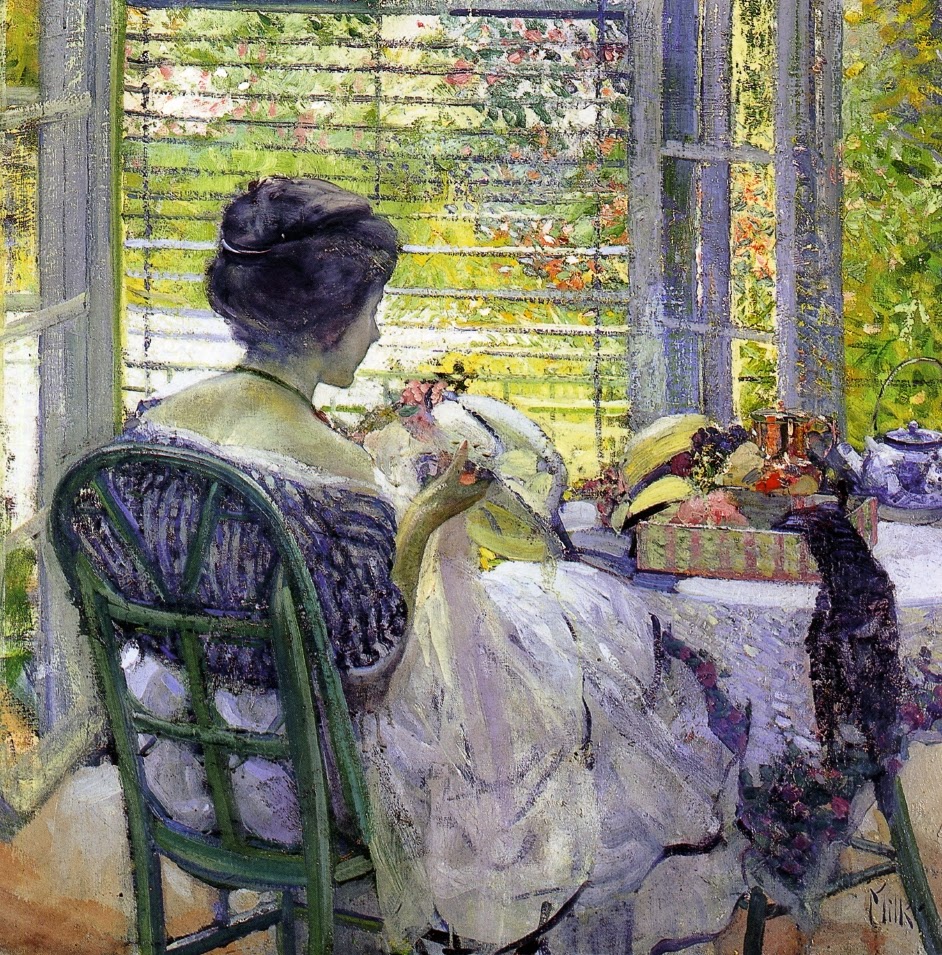 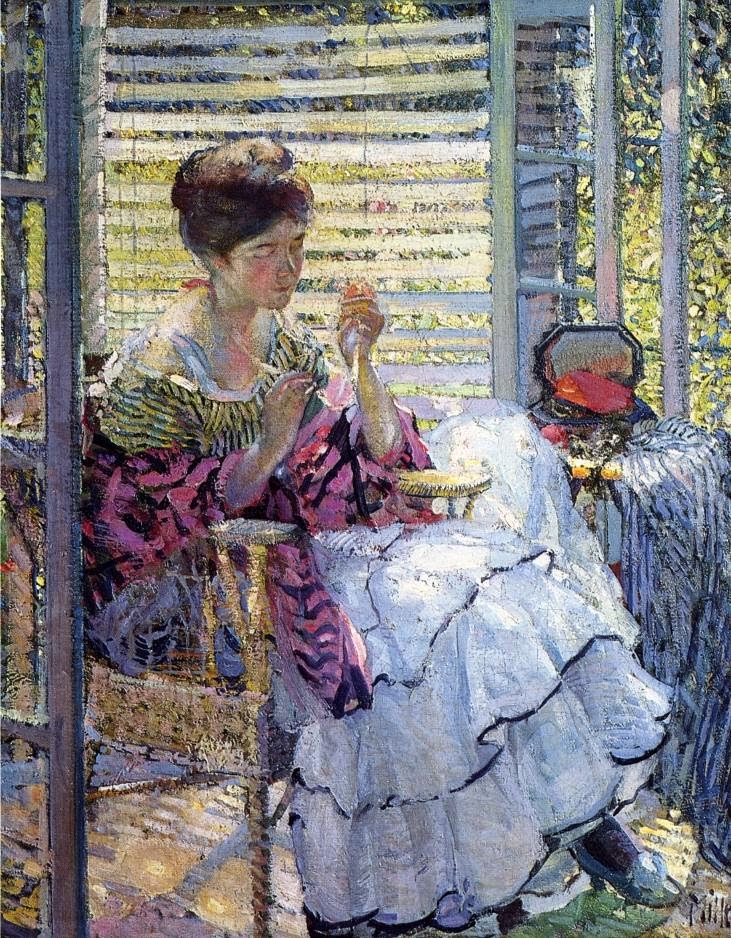 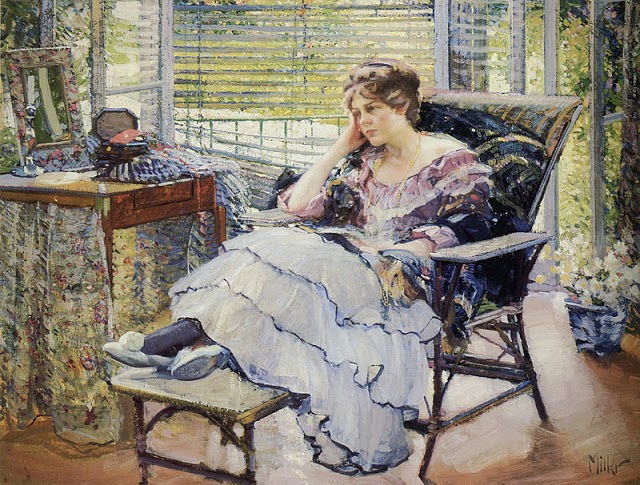 Reverie - 1913
Ditto. Note the sewing (?) box with the open top is the same as in the previous painting. 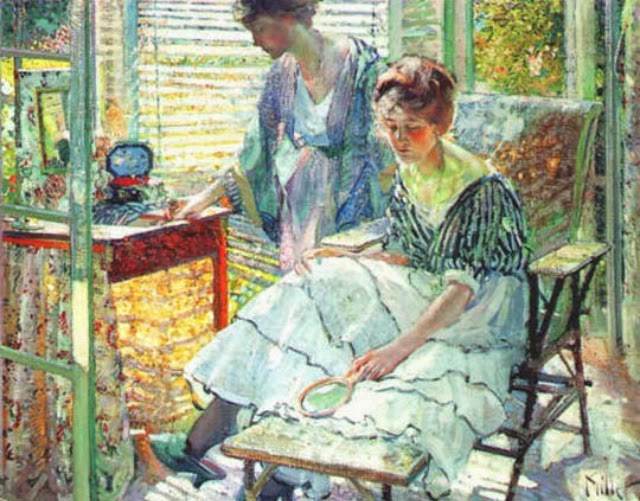 Sunlight - 1913
Same window blinds, same table, same box, same chair, same foot rest and, of course, same skirt. I even suspect that both women in the painting were posed by the same person. 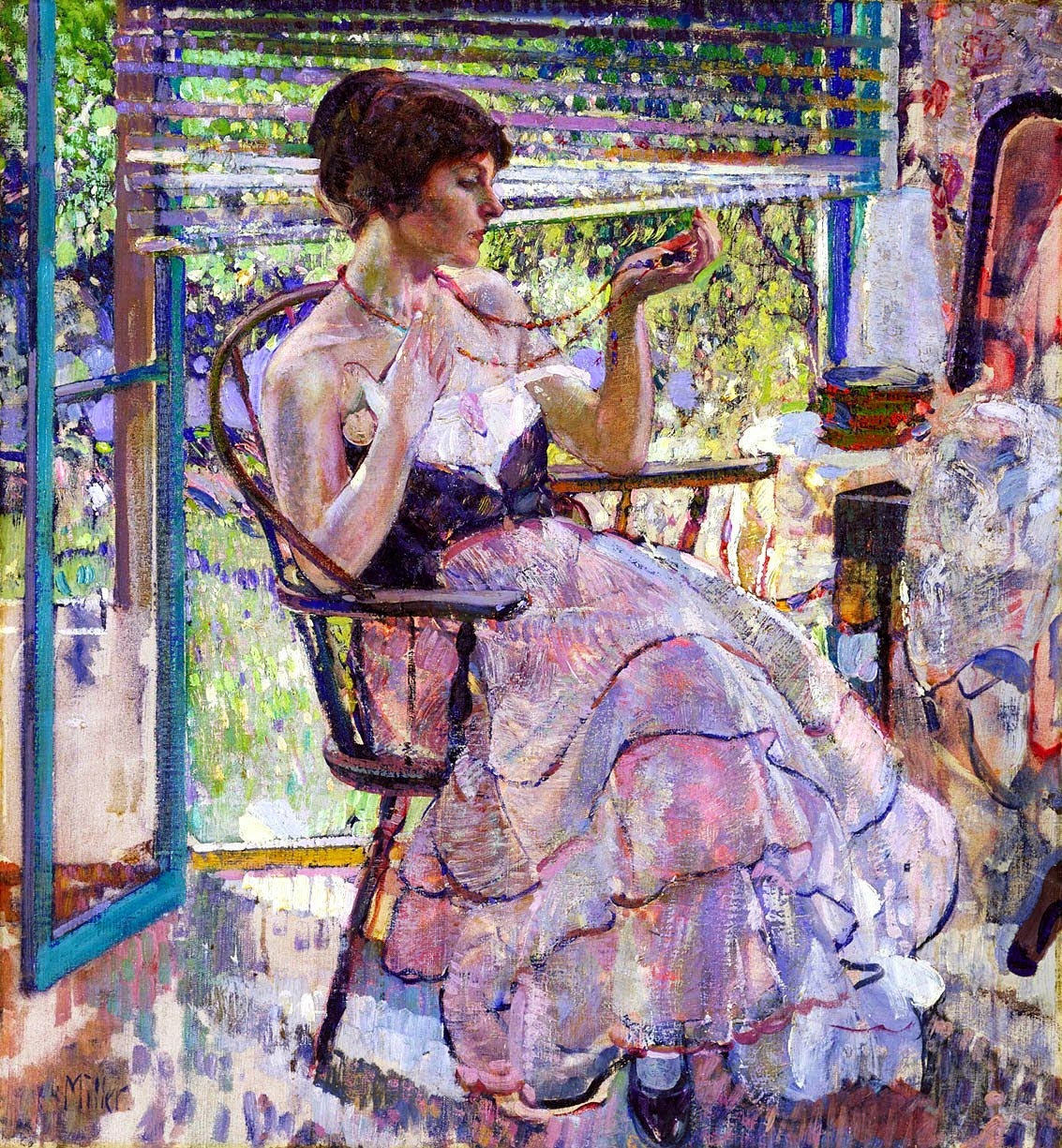 The Necklace - c. 1924
I notice that the model for all the paintings shown thus far seems to be the same person. The hair-do matches, as does the shape of the nose, for instance. Probably Miller's wife, because she'd be available to pose and wouldn't likely charge a modeling fee. I question the 1924 date; most like done ten years earlier. 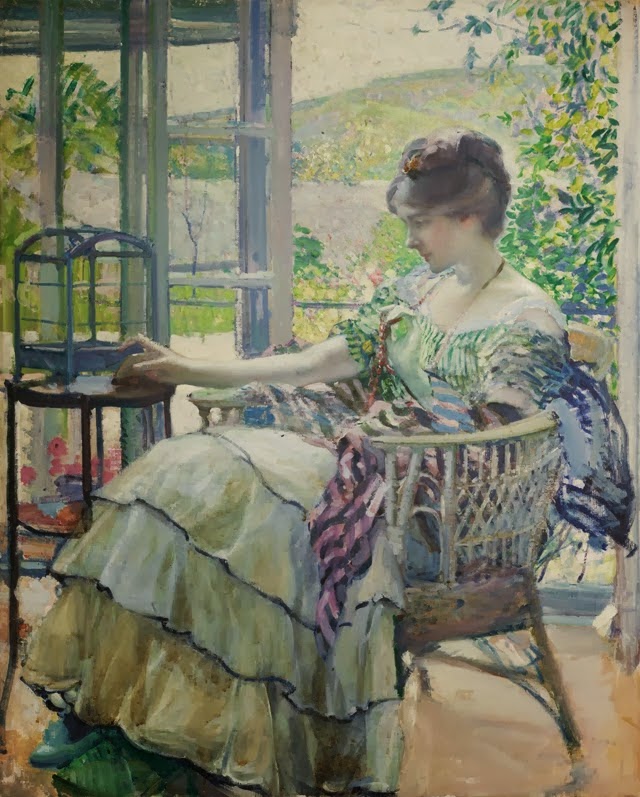 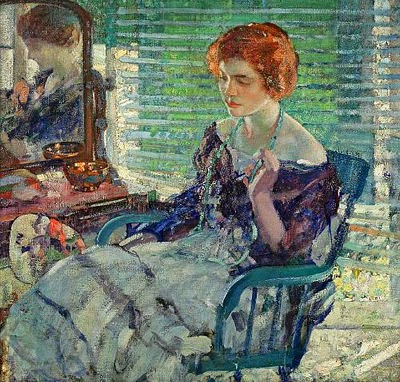 Seated Lady with Red Hair
Big change, other than that persistent skirt. The subject is a different woman, but the room and some of its contents seem the same as before. 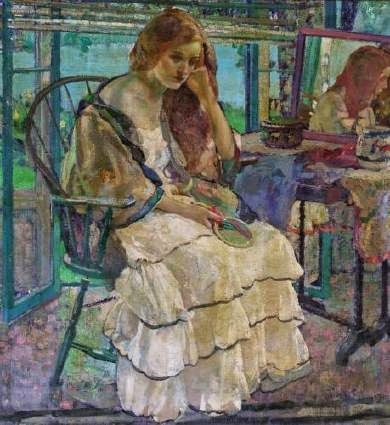 Red Haired Woman Seated at Vanity
The usual setting, although this mirror on the table has a square frame. The model might not be the same as the redhead in the last image, because her hair seems a little longer than the other's would have been had it been let down. But I could easily be wrong. 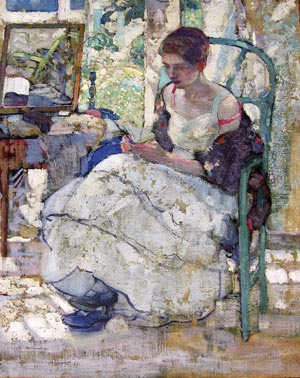 Woman in green chair
The mirror and skirt look the same as in the last image, but somehow the room seems different. Elsewhere in France, perhaps? Or maybe even Provincetown. 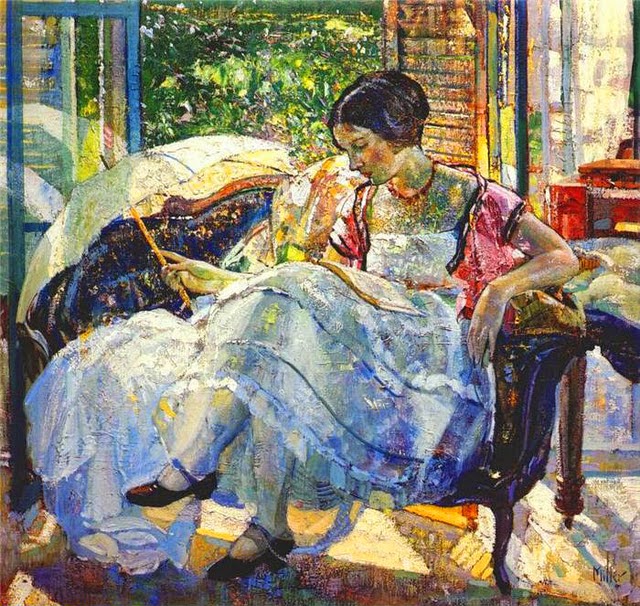 Girl reading
This might be Miller's daughter. The hair style suggests the 1920s. The skirt is similar to the others, but has a different hem. 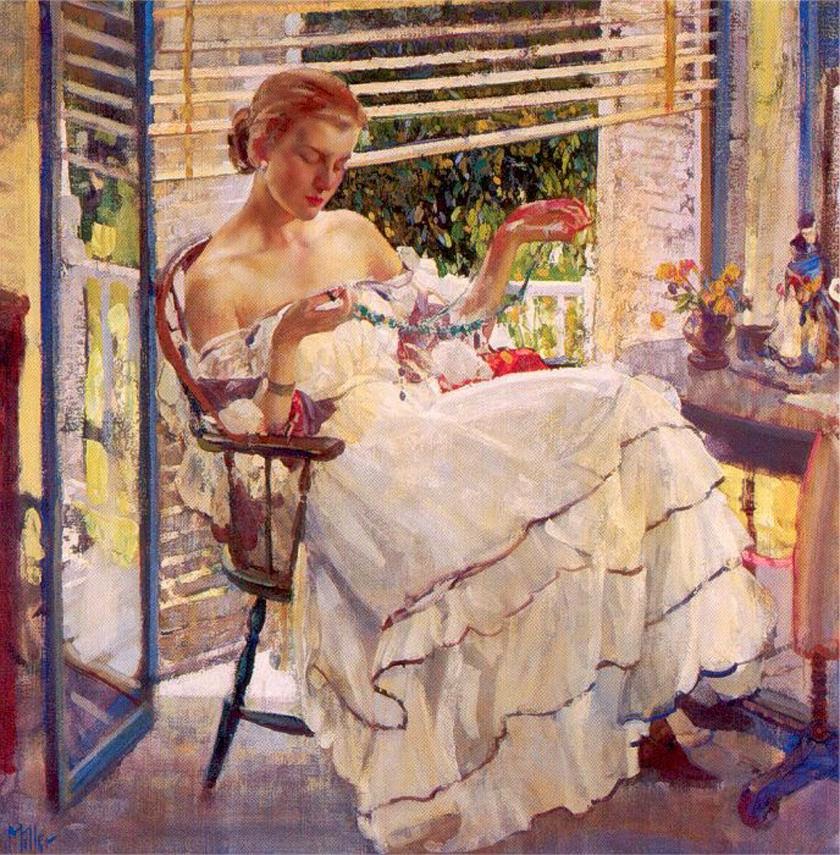 Young woman holding necklace
This looks like that same model used for the painting above. French doors and venetian blinds return. I suspect these two final paintings were done later than 1930.

If I wanted to sell my paintings I might refrain from painting girls, however pretty, who look rather vacant or somewhat sad.

But perhaps it was fashionable.