A Review, then Towards the End: Hugh Ferriss

Hugh Ferriss (1889–1962) is my favorite architectural delineator. He has plenty of other fans, if the nearly 200,000 results from Googling his name is any indication. A brief Wikipedia entry about him is here.

Ferriss is probably best known for two aspects of his work. The first deals with 1920-1930 renderings of skyscrapers actually built or that were proposed but not built for one reason or another. The other is the set of speculative rendering of a future city collected in his book "Metropolis of Tomorrow" (1929). Many of these images are iconic of their times.

He usually rendered using pencils, charcoal and related shading media. This suited the high-rise architectural themes of the 1920s -- styles known as Art Deco and something that might be called streamlined Gothic.

The 1930s saw the Great Depression with its general lack of new construction aside from government buildings that often featured highly simplified classic themes with a hint of Deco. Post- World War 2 architecture soon conformed to International Style dictates. That is, tall buildings were severely rectangular with glass-and-steel cladding while lacking any form of decoration.

Ferriss' successful 1920s rendering style and mediums were not really appropriate for depicting International Style buildings. They worked best with buildings with more intricate shapes, stone or brick cladding, and ornamentation. Although he was involved in some major projects, the resulting renderings were not nearly as impressive as his earlier works. This was despite an effort to adjust his style to the new circumstances. 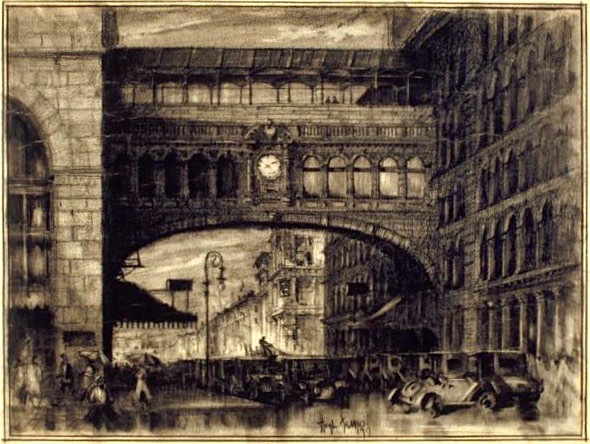 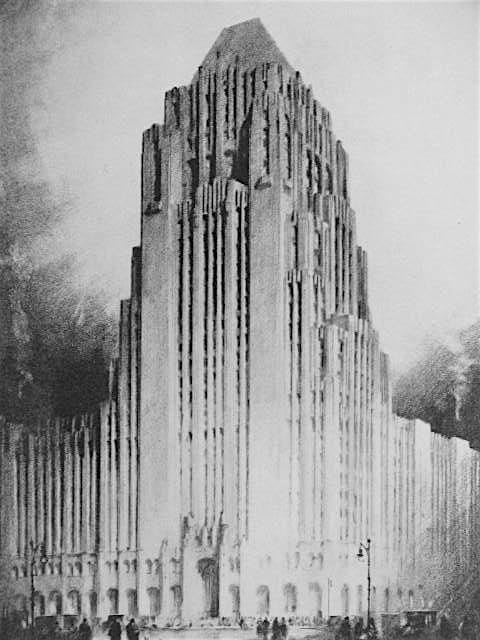 Fisher Building (Detroit) - 1928
Located on West Grand Boulevard across the street from what then was General Motors' headquarters. 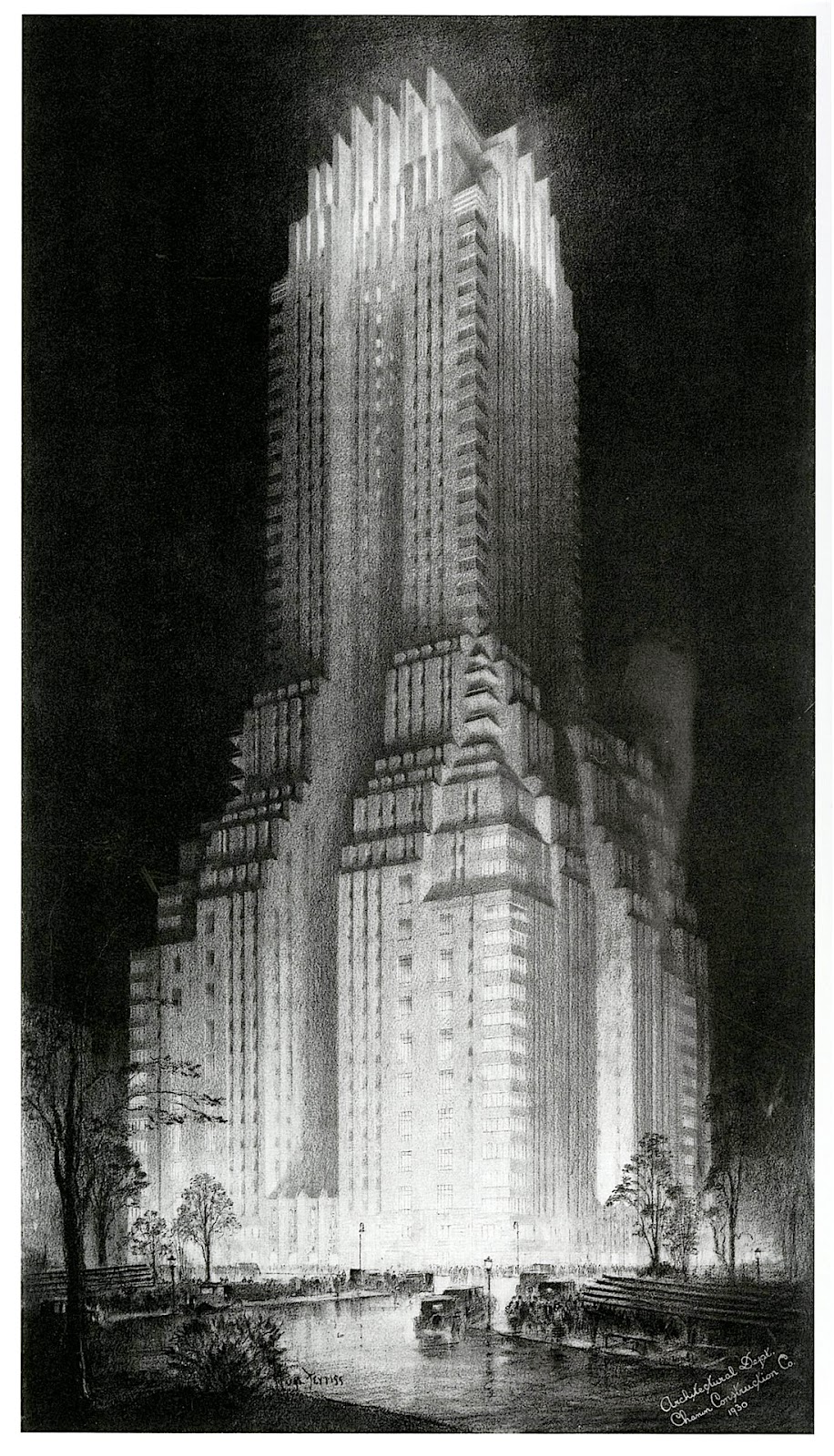 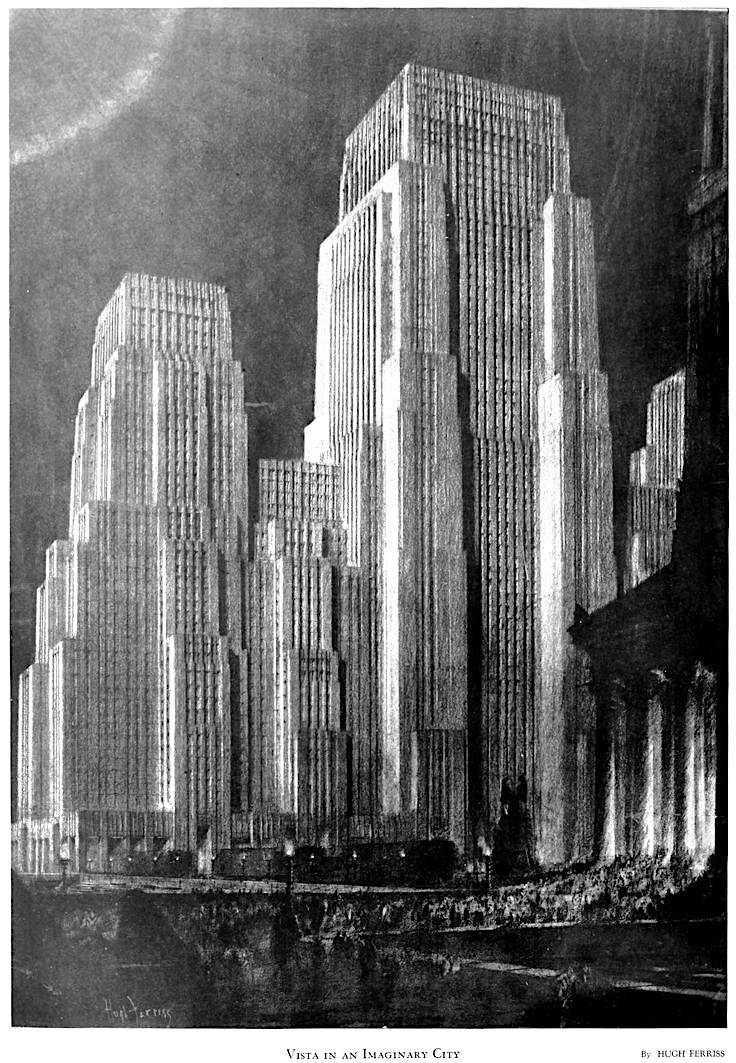 Future city scene
As was the case for the previous images, Ferriss' style matched the architectural style very well. 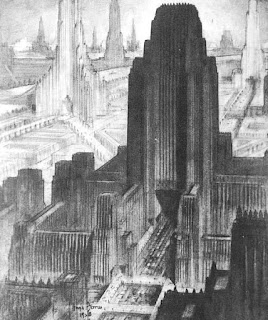 Metropolis of Tomorrow - 1928
Again, the buildings are sculpted masses where windows are comparatively small details. 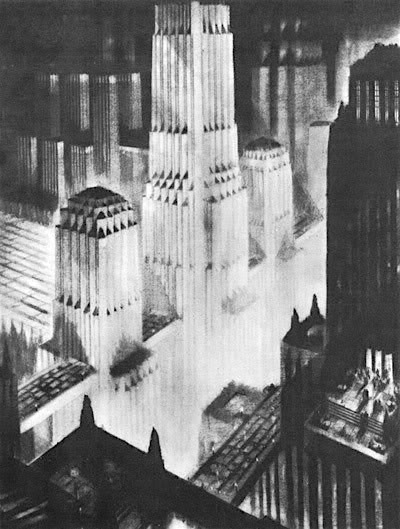 Metropolis of Tomorrow - c.1928
Dramatic night scene. I wish I were at that cocktail party on the terrace at the lower right of the rendering. 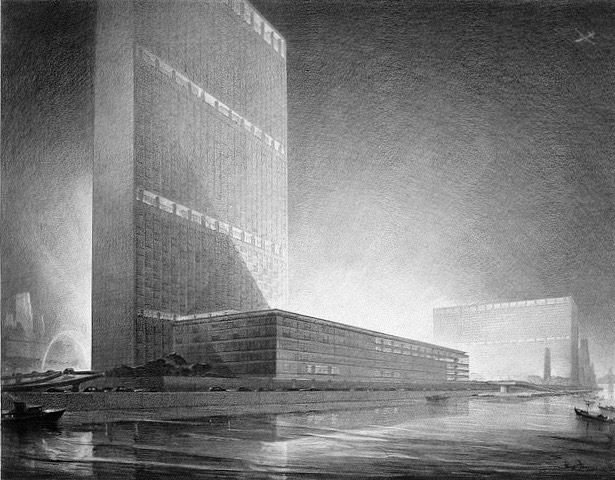 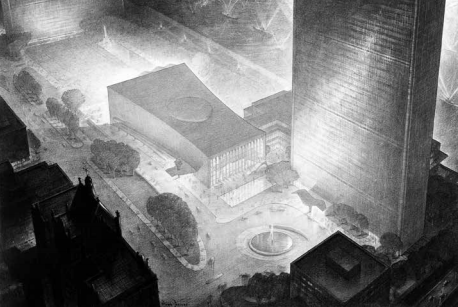 United Nations Headquarters - c.1948
More about the UN Headquarters here. Design began in 1947, a cornerstone was laid in 1949 and the initial grouping was completed by 1952. The tall Secretariat building is steel-and-glass on the longer sides, and all this reflective material is hard to depict using Ferriss' toolkit. Here he did his best to emphasize massing rather than fenestration. Lever House (New York City) - c.1949
The Lever House, built 1950-52, was an early International Style office building in New York. Sensational when it was new, but now nondescript. It is on the west side of Park Avenue between 53rd and 54th Streets. In this rendering, Ferriss selected a night setting that allowed him to capture some of the structural elements without the complication of reflections off the glass. 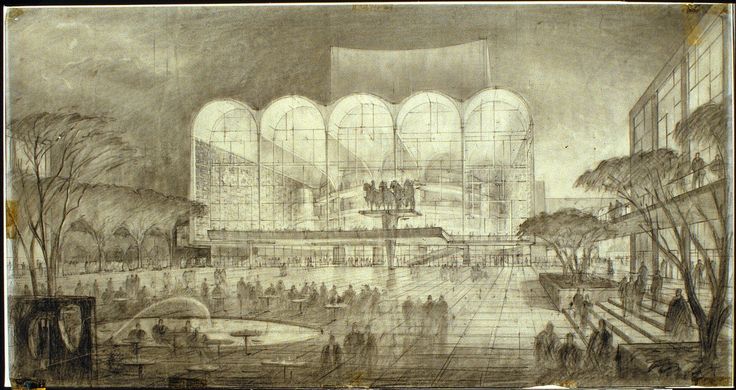 Lincoln Center for the Performing Arts - c.1959
The main Lincoln Center groundbreaking was in 1959, and the original ensemble largely complete by 1966. Shown here is the Metropolitan Opera House. It was completed in 1966. Given that Ferriss died in January 1962, it is likely that this is one of his last renderings.

Labels: Architecture, Illustration, Towards the End