Roland H. Heyder (1956 - ) is a German painter who, according to the latest information I could find, is based in Tenerife in the Canary Islands.

There are plenty of images of his work on the internet, but little in the way of biographical information. His web site is here, and from there you can link to "vita" for a few details. Heyder says he is self-taught and early-on was inspired by Salvador Dalí and Surrealism as well as Magical Realism.

I find his art more difficult to pigeonhole. Like Dalí, Heyder paints in a smooth, hard-edge style. But his subjects are seldom distorted in a Dalíesque manner. Nor is there any claim that he is tapping into his Freudian subconscious, as the actual Surrealists claimed (largely falsely, I think).

What Heyder does do is juxtapose items in wide-open settings that evoke the spatial feeling of Dalí and some other Surrealists. He also usually includes gorgeous, nude or partly-clad women in psychologically ambiguous situations.

It takes a lot of work to create paintings like Heyder's. Yet he has created a large number of them, so he's clearly a hard worker. Click on the images below to enlarge. 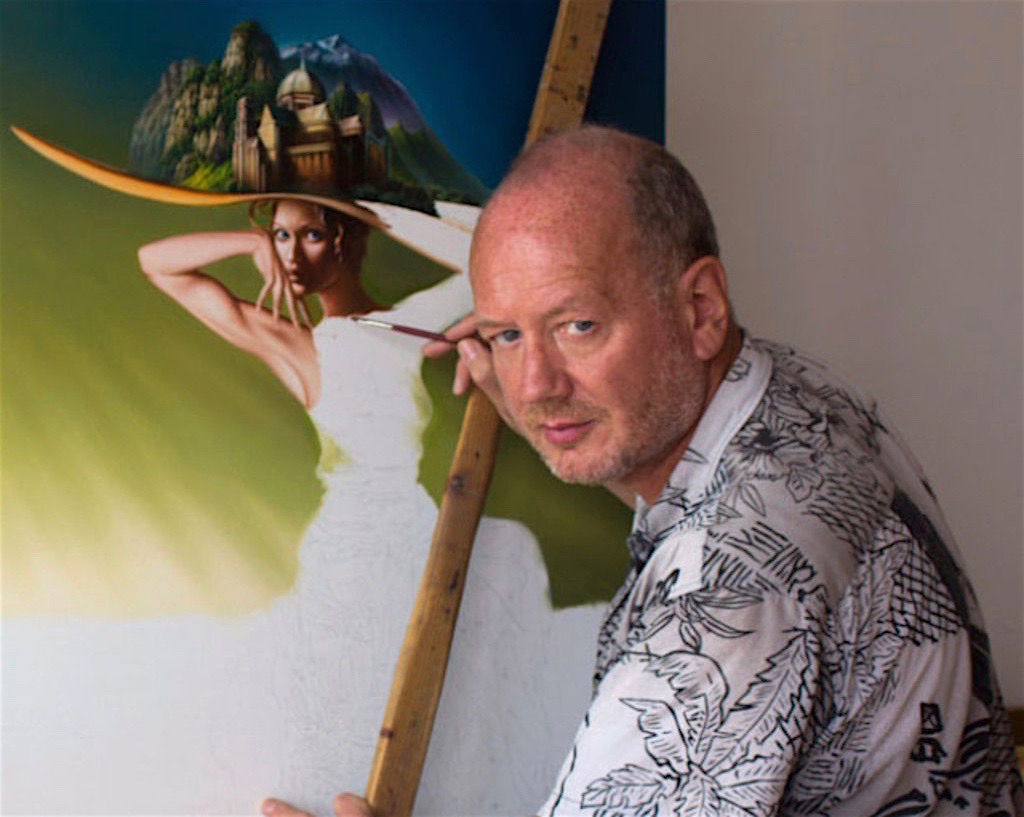 Photo of Roland Heyder at work
His website states: "In terms of technique, I generally work on canvas prepared with at least two coats of gesso. I do a pencil sketch on paper, then on the canvas before painting with acrylic and then in oil." But this photo shows him painting directly in what seems to be oil in a top-down "window shade" manner. To do this, he would have to have spent time clearly defining his images and carefully establishing colors and their placement before staring the final painting.

4000 Miles from the Washington coast - 1986
Juxtapositions with a Surrealist feeling.

Bedrohtes Stilleben (Threatened Still Life) - 1995
More of the same, but with a whiff of Magical Realist Giorgio de Chirico. 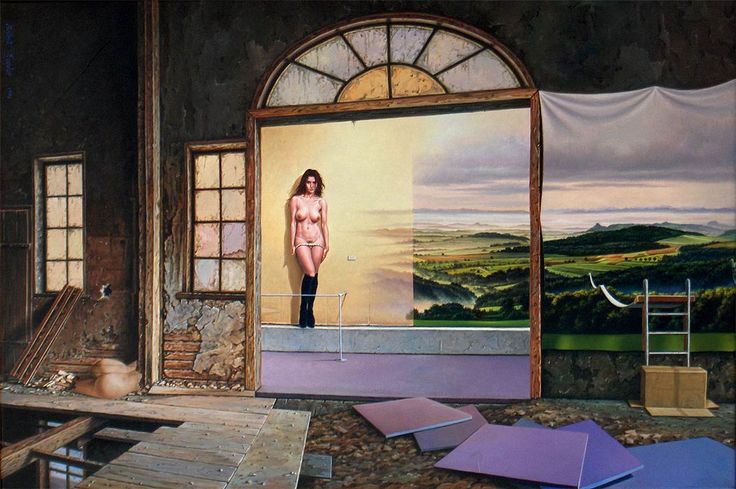 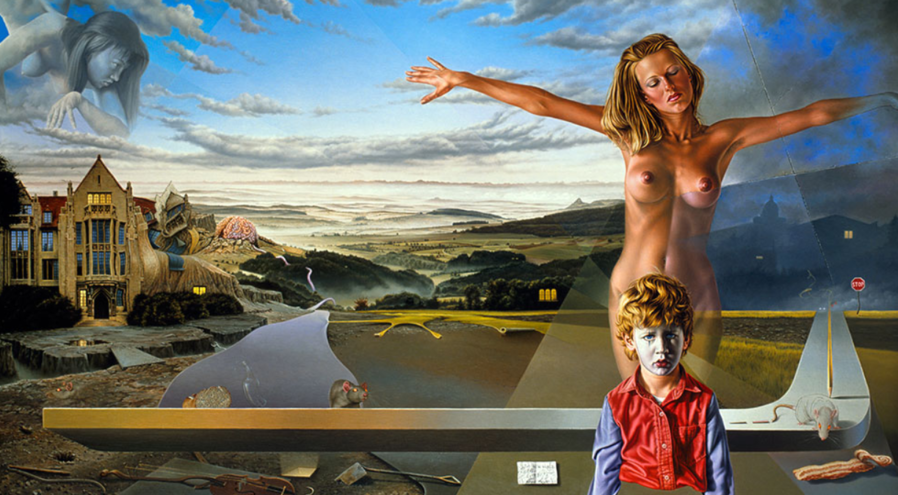 Das Bild vom Frieren (Picture of Freezing) - 1984
Note the expression on the face of the woman at the left; this enlivens what otherwise would have been a static scene. 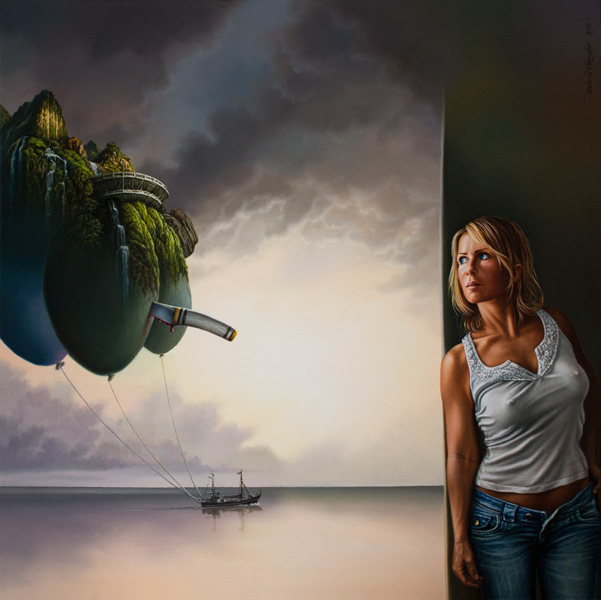 Das Castell - 2011
This is about as Surrealistic as Heyder gets. 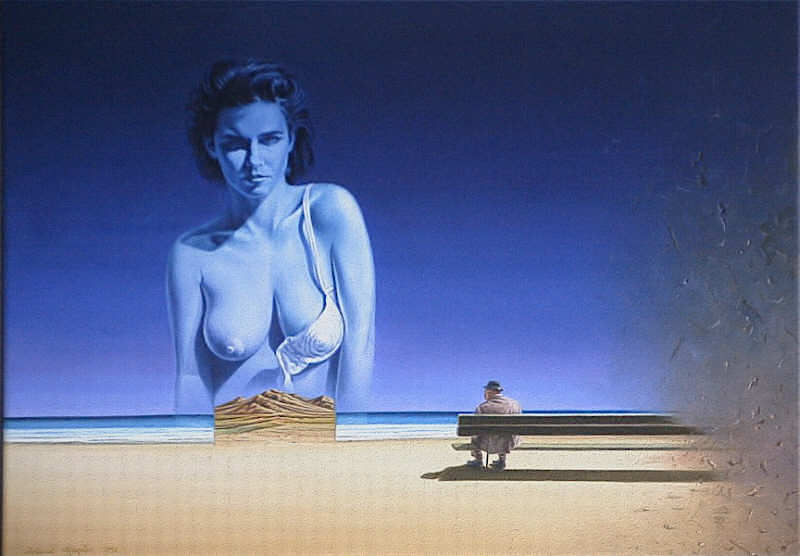 Der alte Mann und das Meer (The Old Man and the Sea) - 1997
The title is the same as that of an Ernest Hemingway novella, though its subject was entirely different from what Heyder shows here. 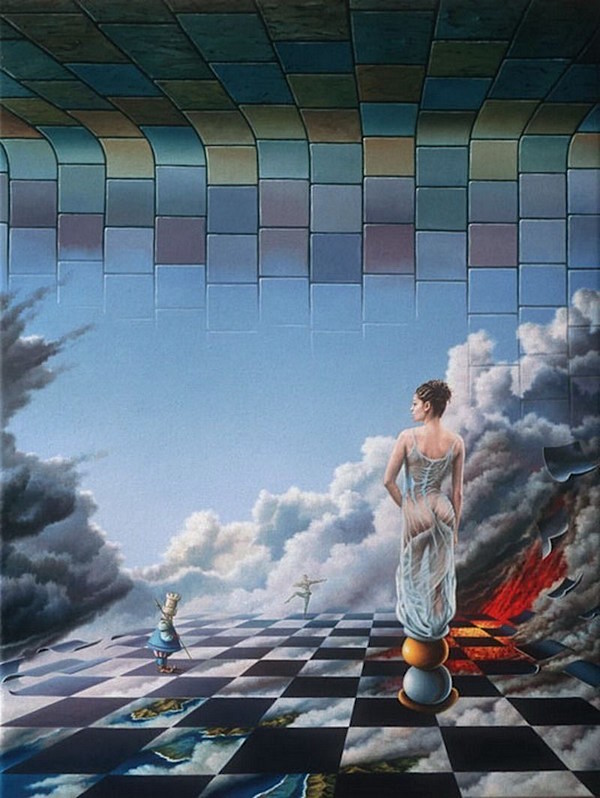 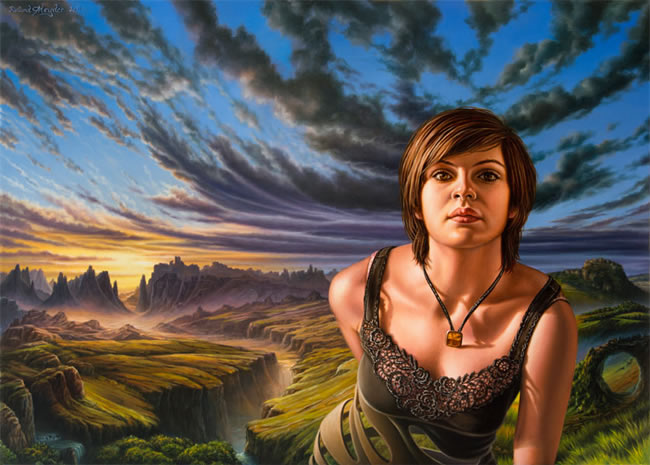