Our cruise ship docked at Naples and, I suspect, most of the passengers going ashore had signed up for tours of Pompeii and other sites on the far side of the Bay of Naples.

Not me. Been there done that a couple of times. But I'd previously spent only two or so hours in Naples and really wanted to visit the Museo Archeologico Nazionale di Napoli (National Archaeological Museum, Naples). That's because it has a collection of the better-preserved wall paintings from places covered by Vesuvius' ash. (What's left on-site is mostly low-quality in terms of preservation.)

In this post I deal with how Roman artists dealt with situations calling for one-point perspective. That is, where buildings or parts of them are portrayed.

Geometrically-derived linear perspective wasn't discovered until about the time of the Renaissance, though some Classical artists were aware of its general effect and attempted to include that in their work. Sadly, aside from the buried art in and around Pompeii, little has survived due to its perishable condition (as compared to robust sculptural art).

Here is an interesting article dealing with Pompeiian perspective. Precise single vanishing points are not found, though clusters of convergences in small areas are. The article makes the further claim that in the real world we don't really observe one-point perspective aside from limited circumstances, this due to eyeball movement as we view things.

Here are some snapshots I took of items in the museum depicting structures. Click on images to enlarge. 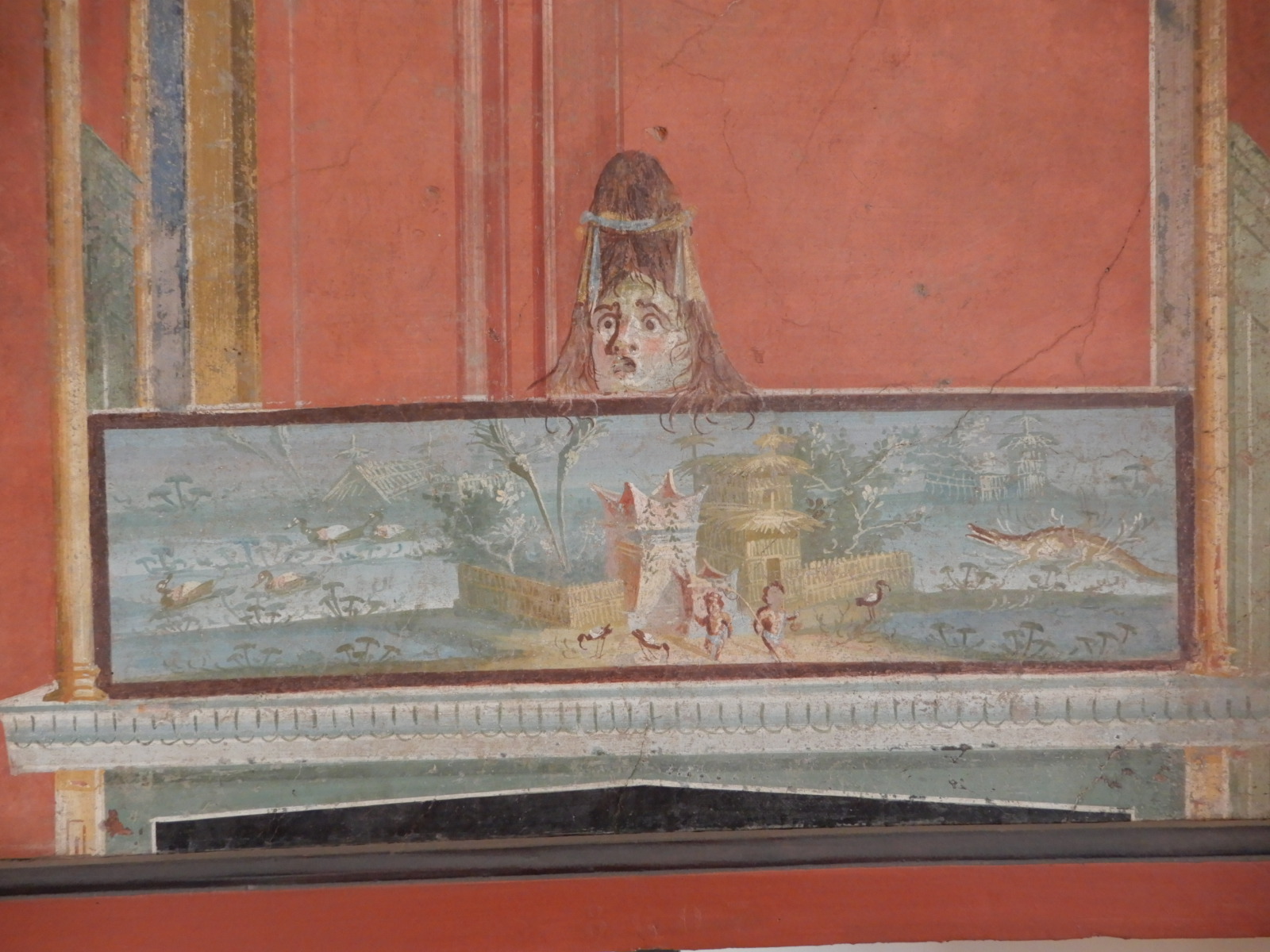 The face at the top is of a mask.  Assuming a high viewing point, the receding lines of the tall yellow building roughly approximate linear perspective. Other structural objects do not. 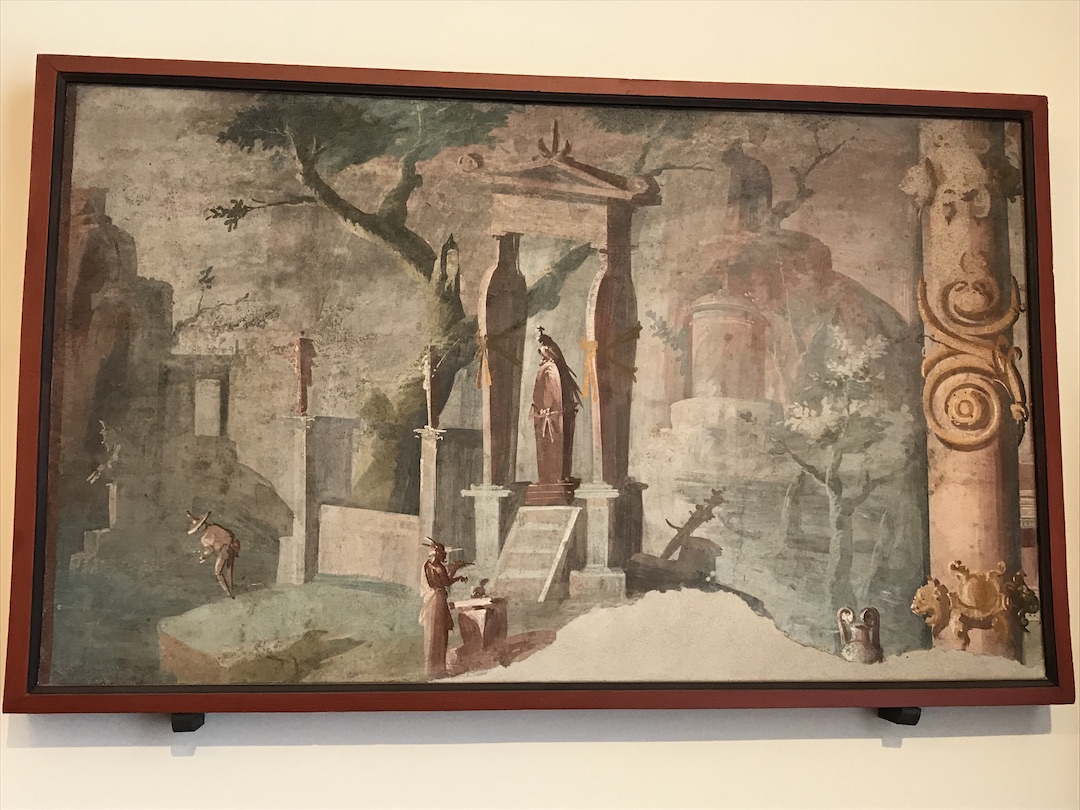 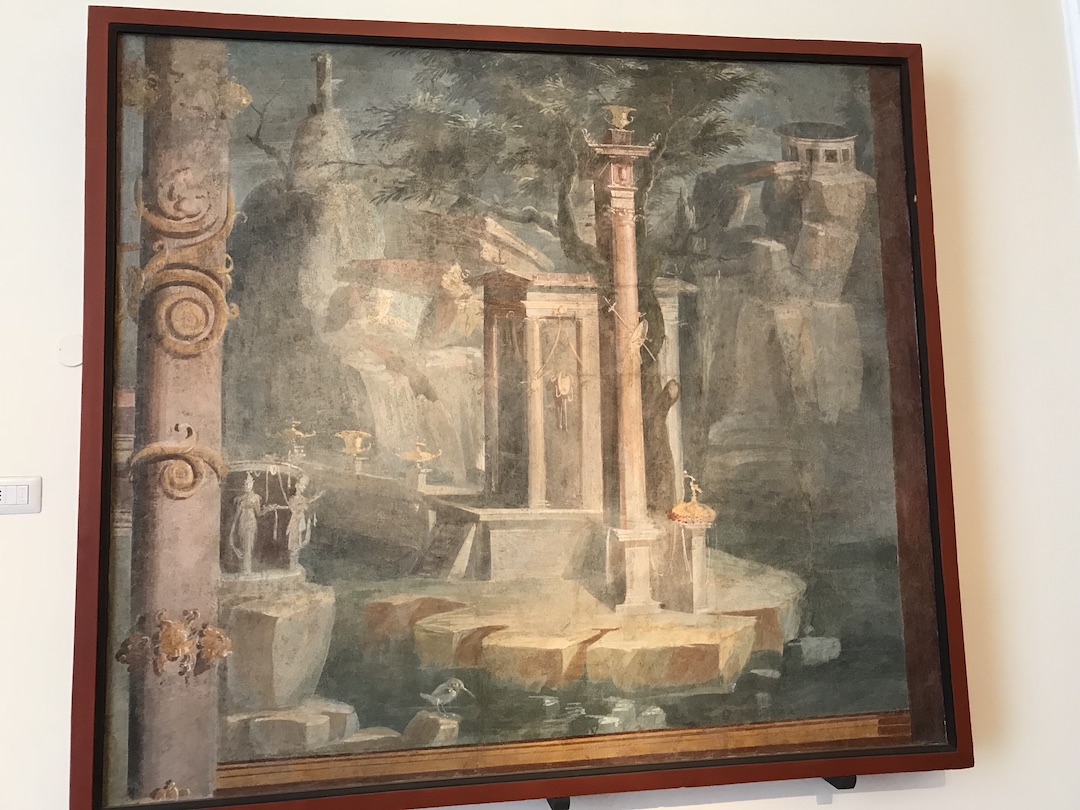 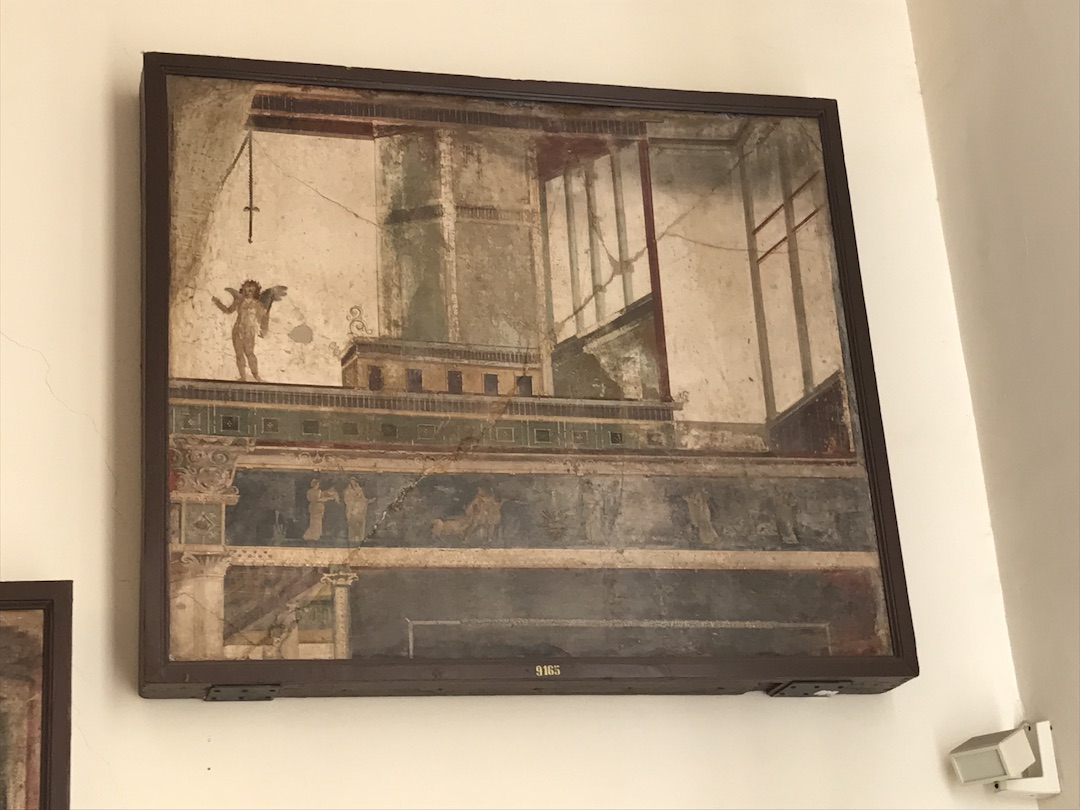 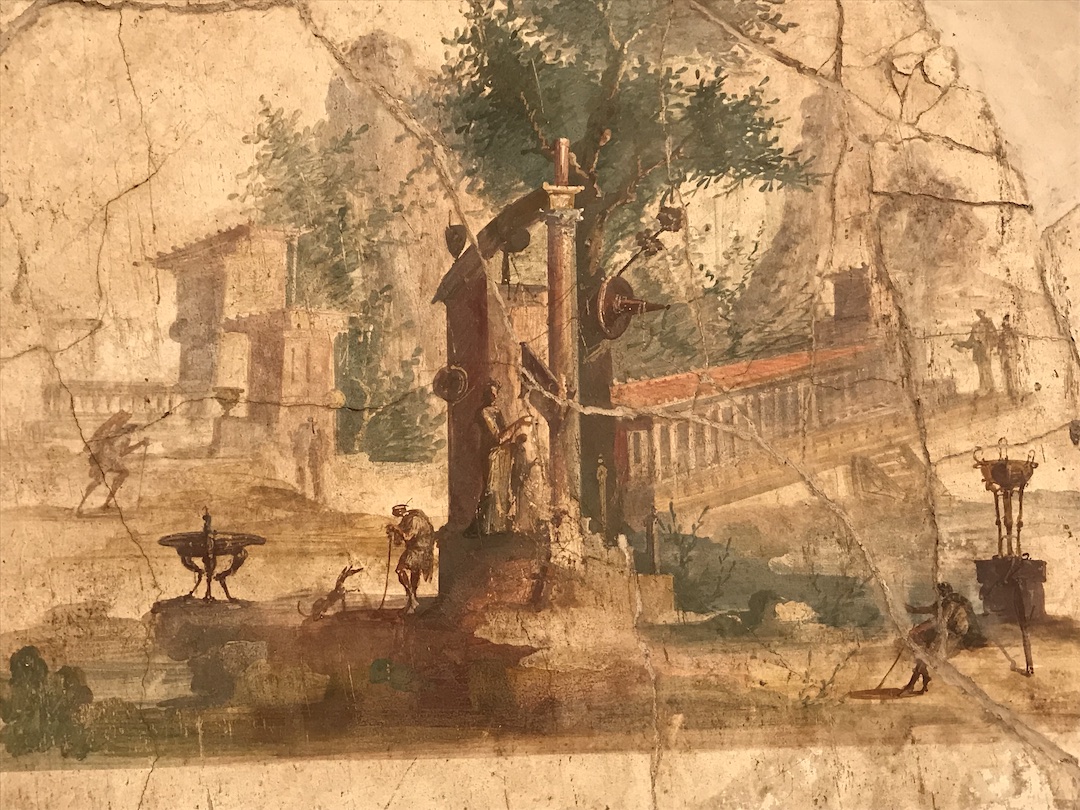 Only the buildings at the left have a sense of perspective. 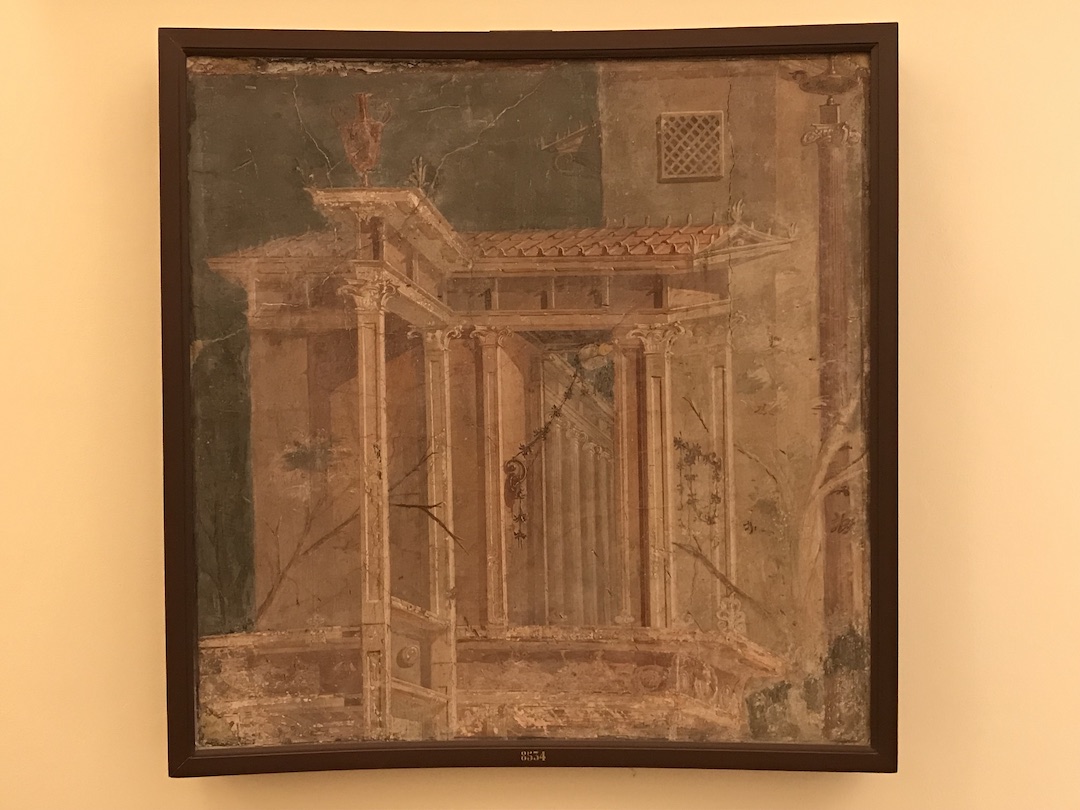 The central (framed) structure with multiple columns relates to the upper part of the projecting structure to the left, which otherwise is isometric. The tiled roof is completely at odds with perspective. 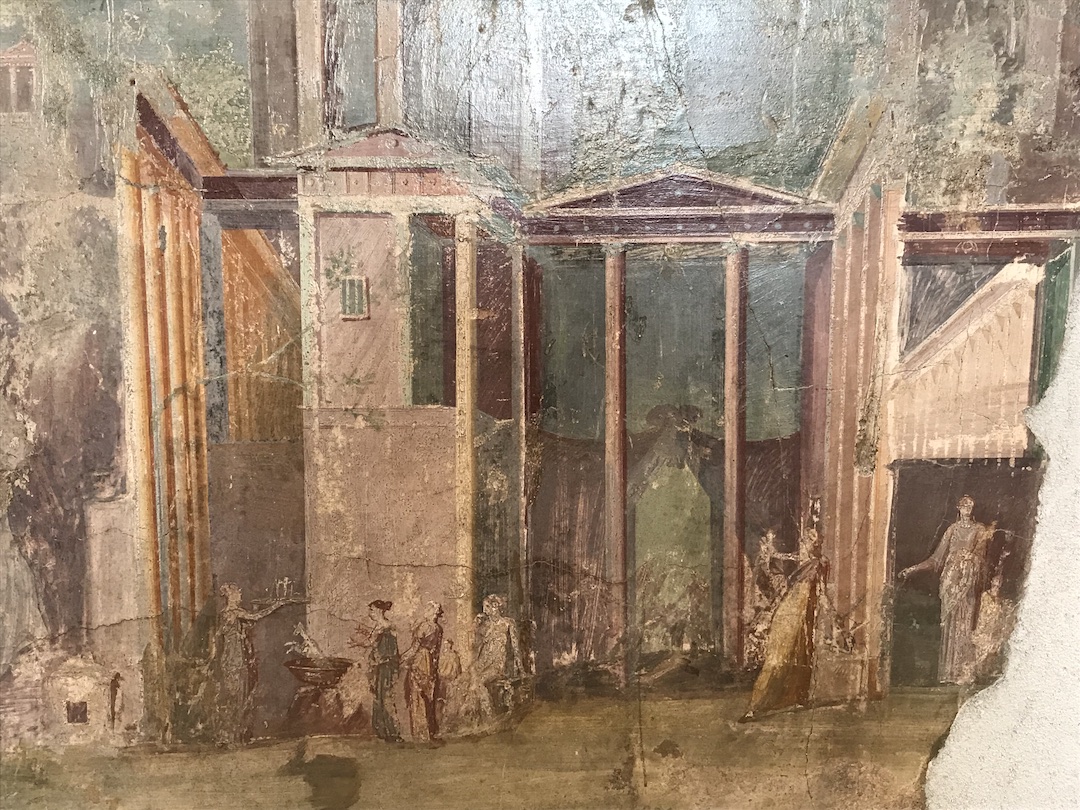 The main structures depicted here exhibit a cluster of vanishing points not far from where Renaissance painters would place a single point. Only the structure with columns at the left deviates seriously.
Posted by Donald Pittenger at 1:00 AM