Beckmann did not always go deeply in that direction. This was the case for his portrait work. Like Rembrandt, he chronicled his appearance sometimes as often as once a year, and more often than that at times. The numerous images below are not an exhaustive compendium of his self-portraits, but offer a sense of how he chose to represent himself as time passed.

Background on Beckmann can be found here. He left Germany for the Netherlands four years after modernist art hating Hitler gained power. Following World War 2 he moved to the USA, but died of a heart attack a few years later. 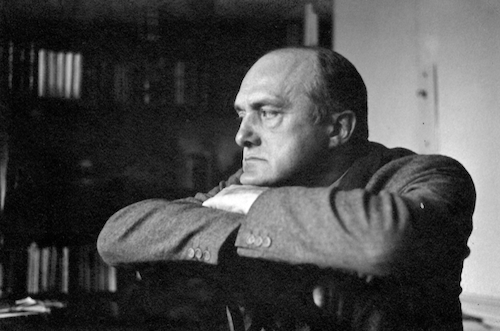 Photo of Backmann
I don't have the year this was taken, but he appears to be in his 50s or older. His most noticeable feature is a strong, jutting jaw. 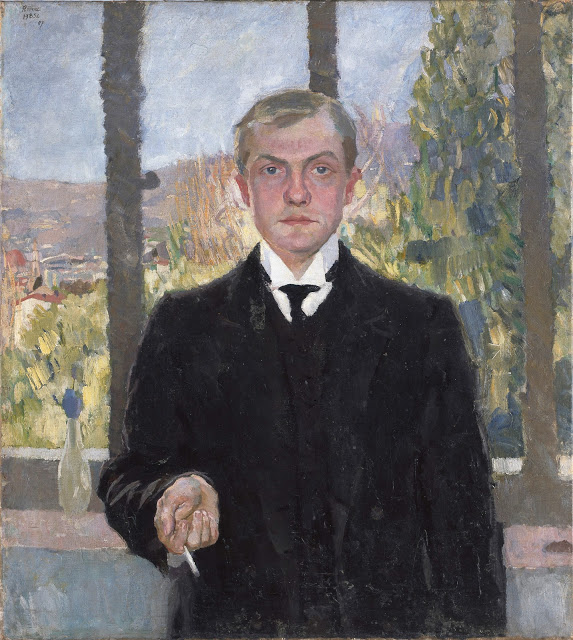 1907
Painted in Florence before he delved very far into Modernism. Note the cigarette -- many of the portraits below include one or sometimes a cigar. 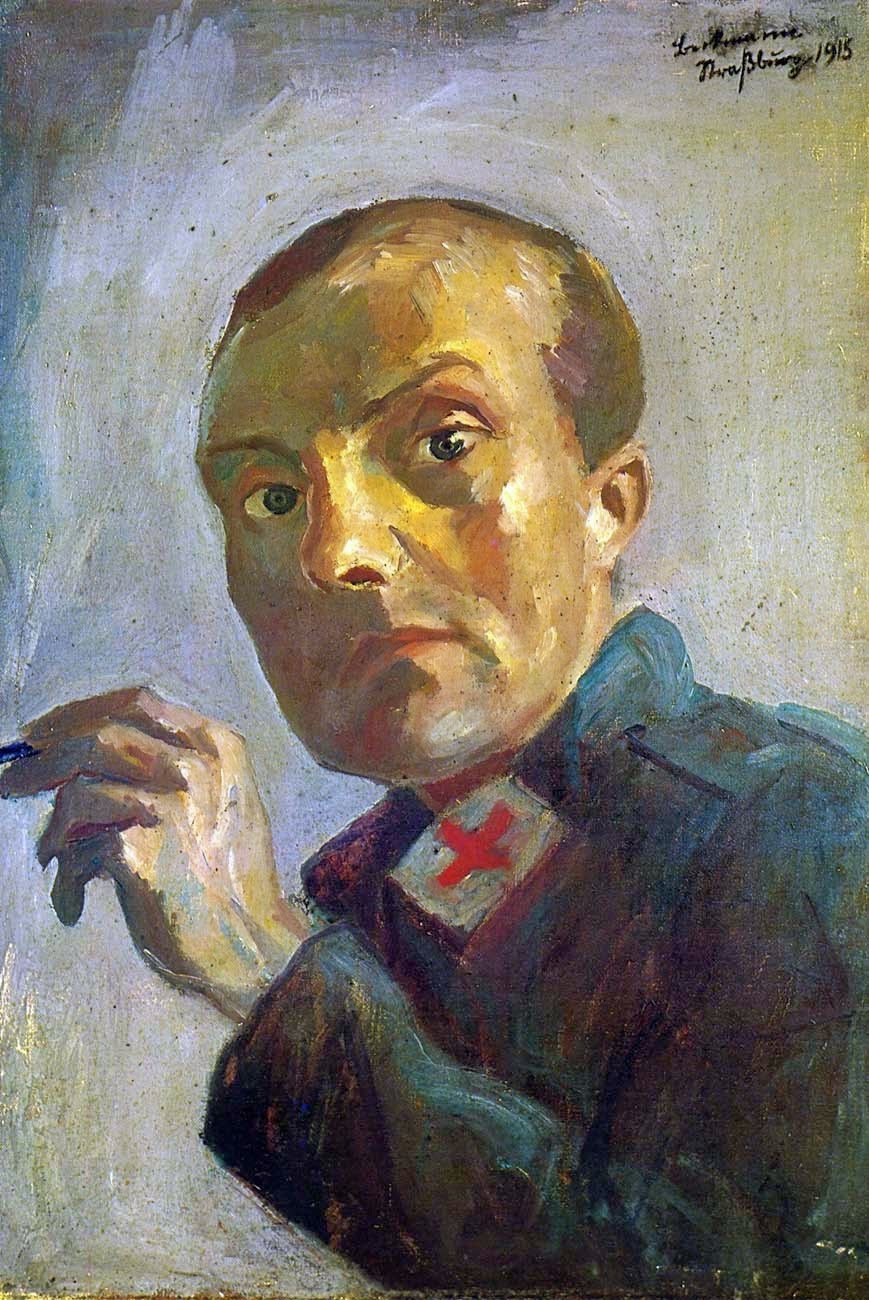 1915
I suppose I would need to consult a biography to find background for this.  Beckmann ordinarily would have been conscripted and later moved to army reserve status.  He was about 30 years old when the war began, but theoretically would have been called to active duty on mobilization in August of 1914.  In fact, he served for about a year in a medical unit and, as his French Wikipedia states, Il est démobilisé en 1915 en raison d'une dépression nerveuse. 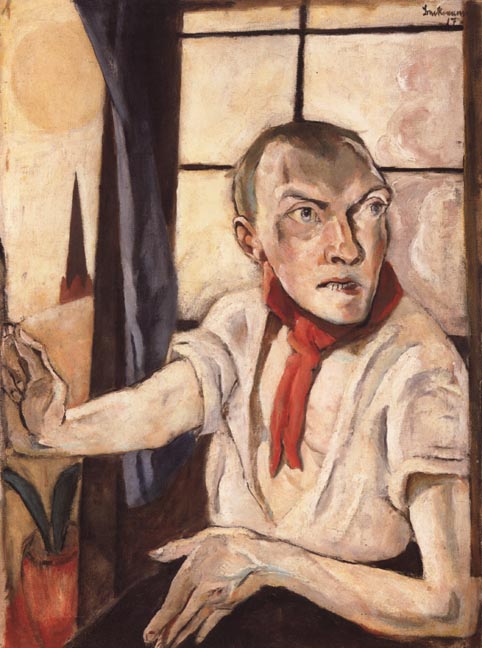 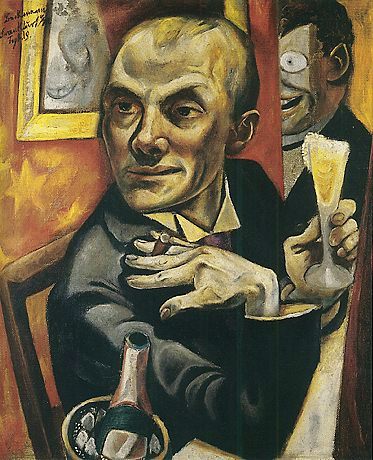 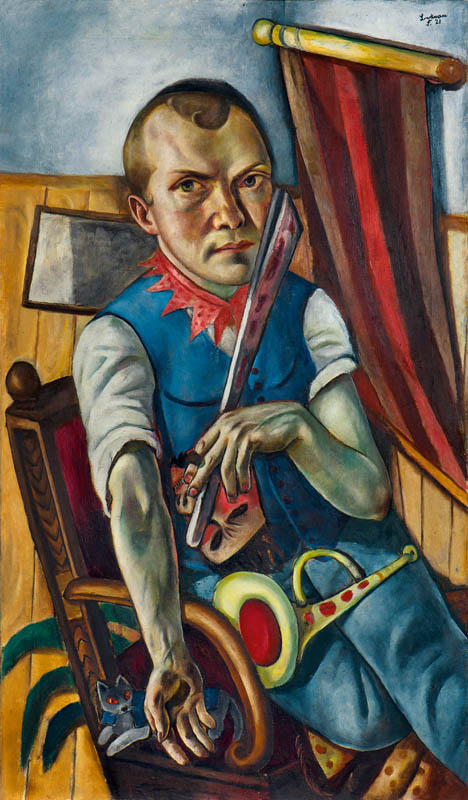 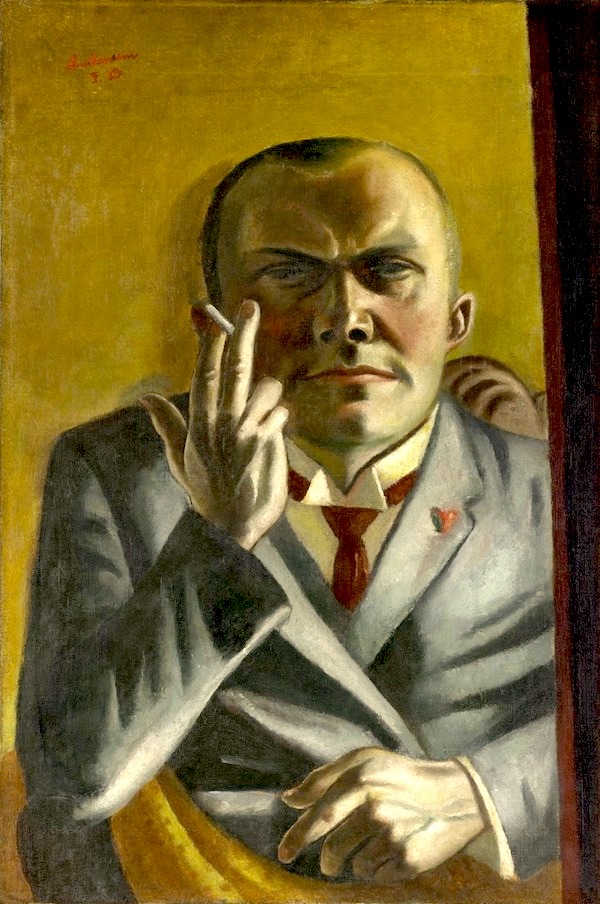 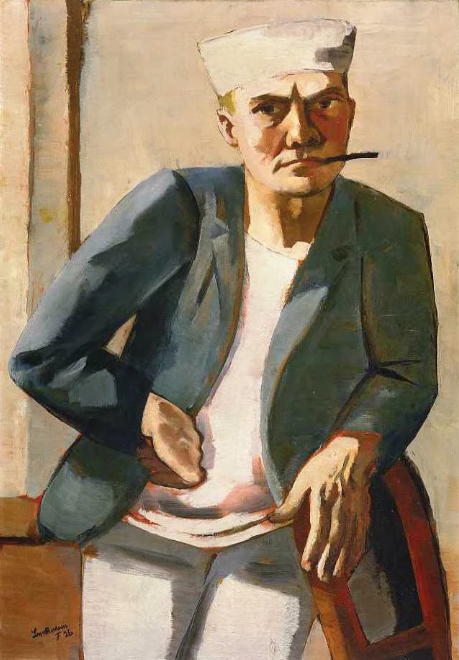 1926
Starting around 1920 his self-depictions are of a strong, not a weak, person. The cigar is in his mouth, not his hand as usual. 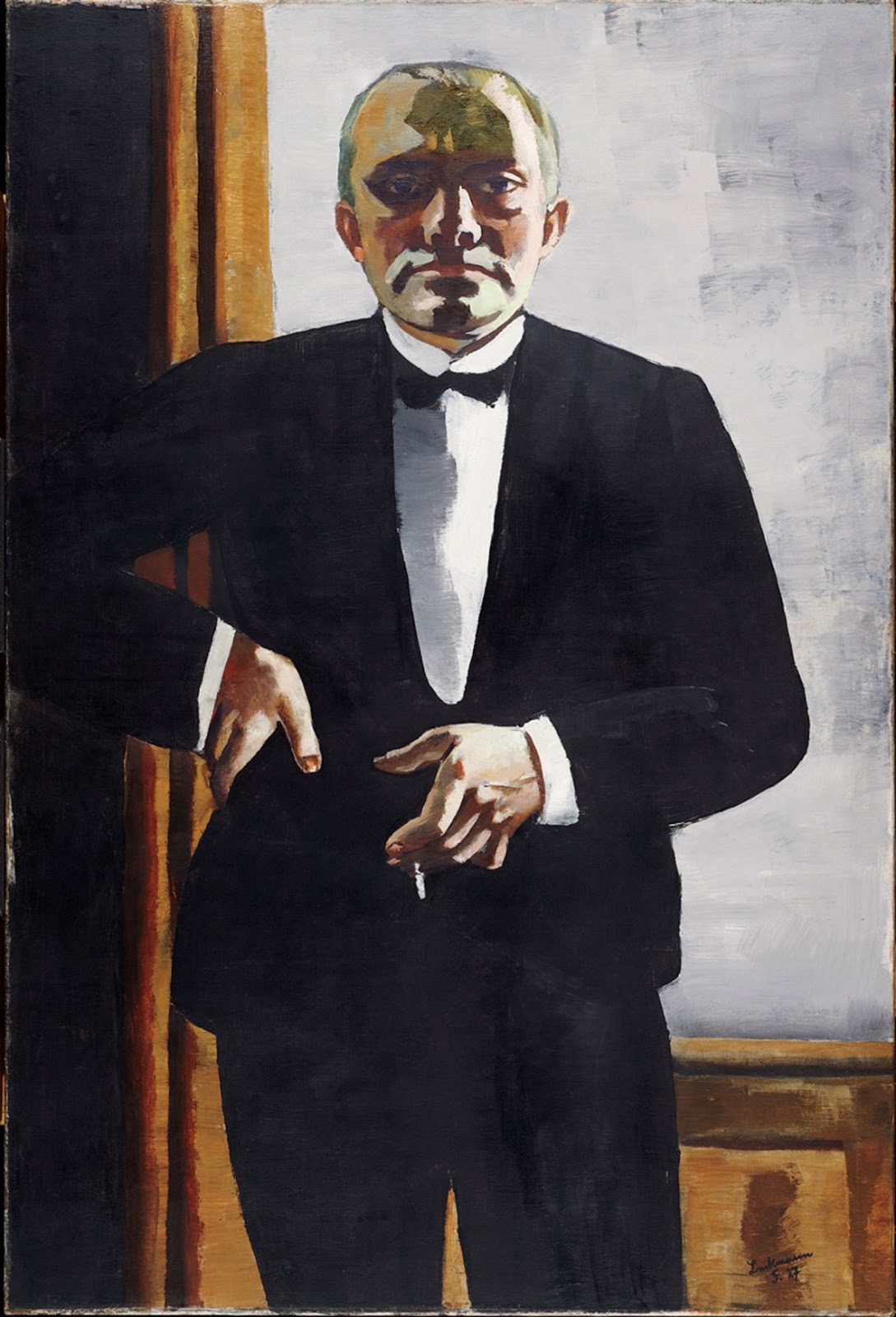 1927
This is probably Beckmann's most famous self-portrait. 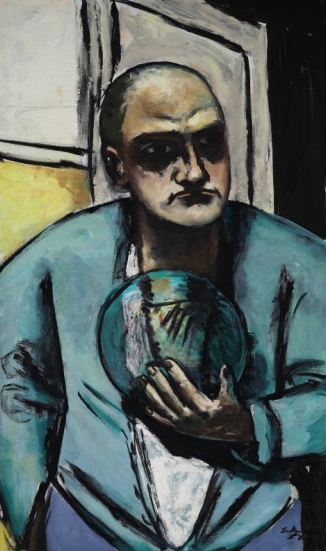 1936
Shortly before he moved to Holland. 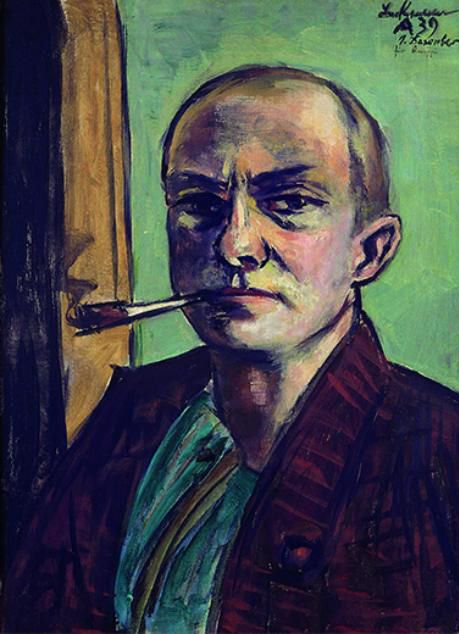 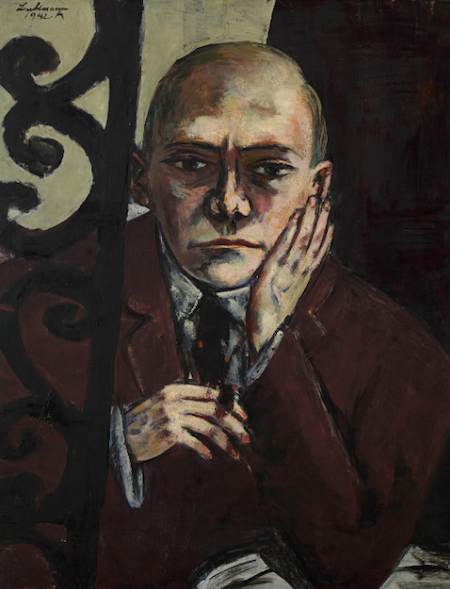 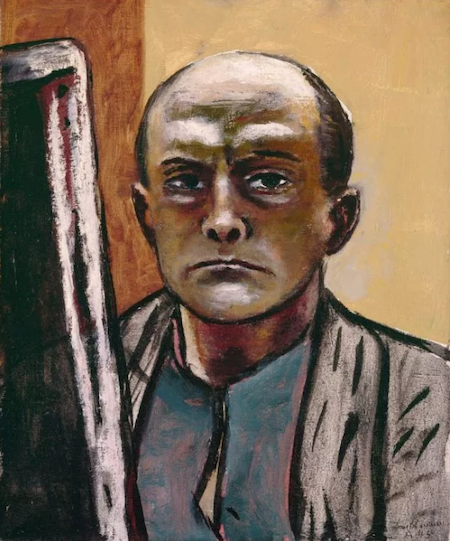 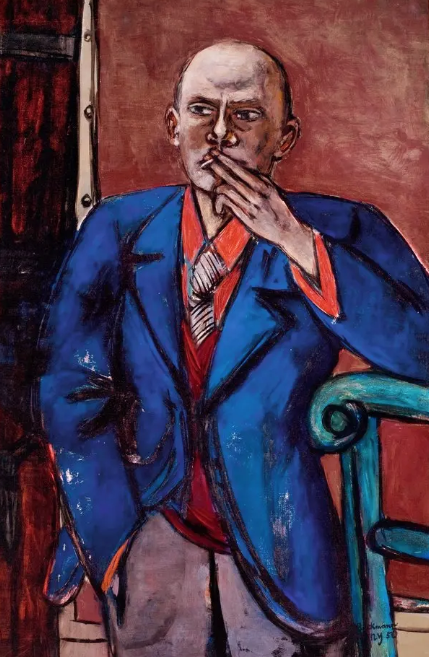 I would not have wanted to be a modernist or expressionist in Germany during the 1930s. They were enemies of the state and were subjected to heavy sanctions. Bauhaus school was closed, and Beckmann and others were dismissed from teaching, forbidden to exhibit or to sell their art. George Grosz lost his German citizenship and Käthe Kollwitz was expelled from the Academy. No wonder that Beckmann got himself to the Netherlands as soon as the Entartete Kunst exhibit opened in Munich.