Ray Prohaska (1901-1981), was born Gracia Josef Prohaska near present-day Kotor in Montenegro. At that time, the city was called Càttaro and was part of the Austro-Hungarian Empire. The Prohaska family moved to the USA when Ray was eight years old.

This Leif Peng site has his Today's Inspiration blog posts dealing with Prohaska, and probably is best for dealing with his professional career. Prohaska's son Tony has this site which focuses more on Ray's origins. Some of the same information can be found on the Society of Illustrators site.

For what it might be worth, it seems that Prohaska was interested in fishing about as much as he was in art and illustration.

His career was successful. I credit this to his strong abilities that included the capacity to change his style to suit illustration market fashions. One item in the first link above is a statement that art directors would sometimes tell illustrators what style to use. For some reason, this hadn't occurred to me, even thought seems perfectly reasonable. On the other hand, given Prohaska's chameleon stylistic capability, perhaps that was more his experience than a general case. Most of the time, I think, artists with known styles were selected because art directors wanted an illustration in that particular style.

The downside for Prohaska, in terms of illustration history, is that his lack of a distinct style makes him less noted or memorable than the likes of Normal Rockwell, J.C. Leyendecker and Jon Whitcomb. 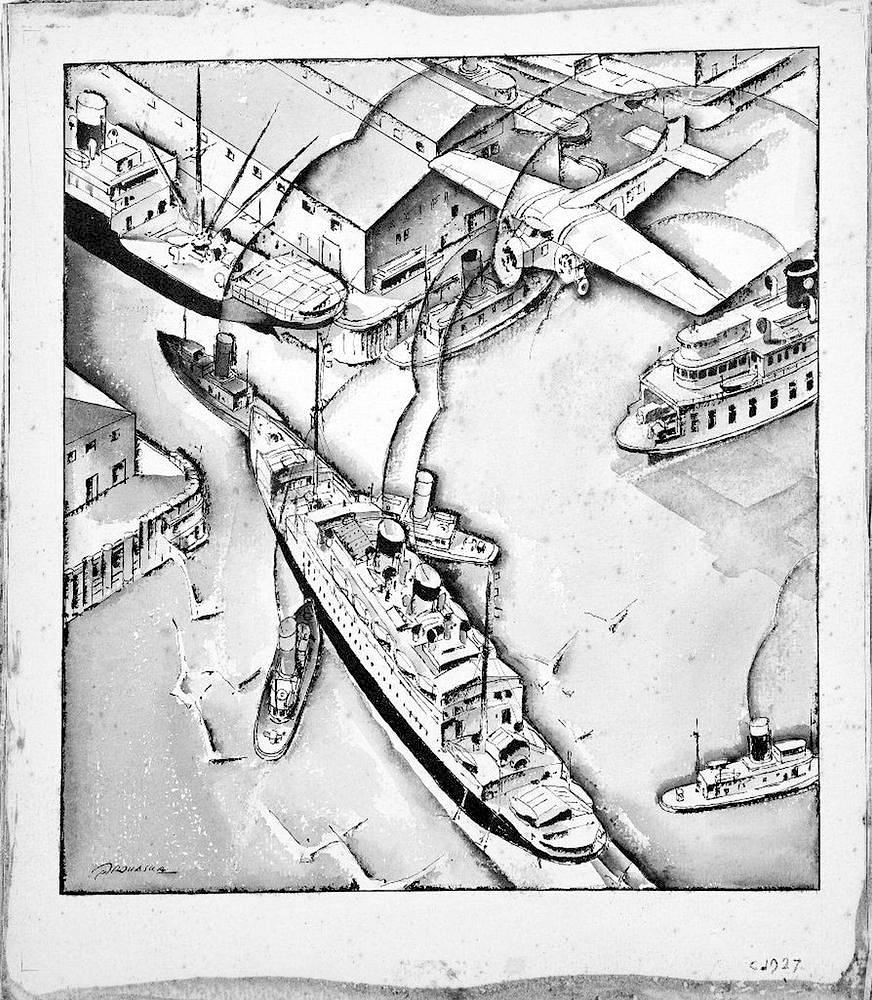 Aerial view of a harbor - c. 1930
I don't know where this view of various modes of harbor transportation was used. 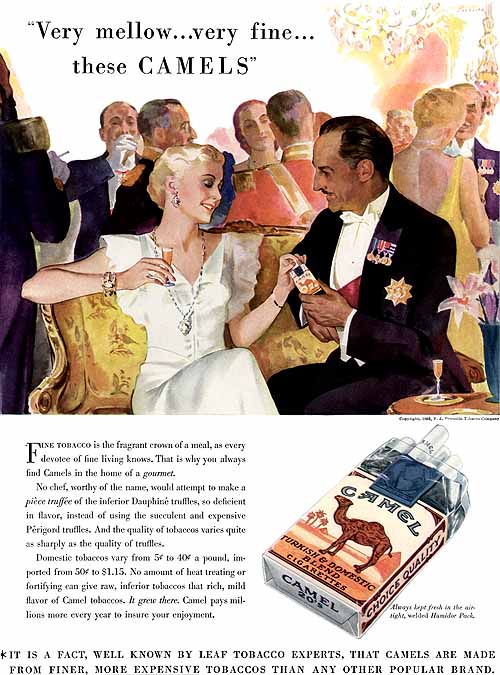 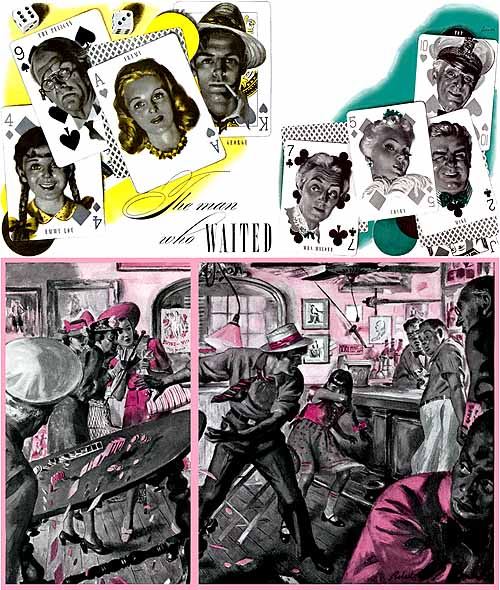 Good Housekeeping editorial art - 1940
This was true at the end of the decade. Here Prohaska did considerable modeling of surfaces, unlike the later style in the previous image. 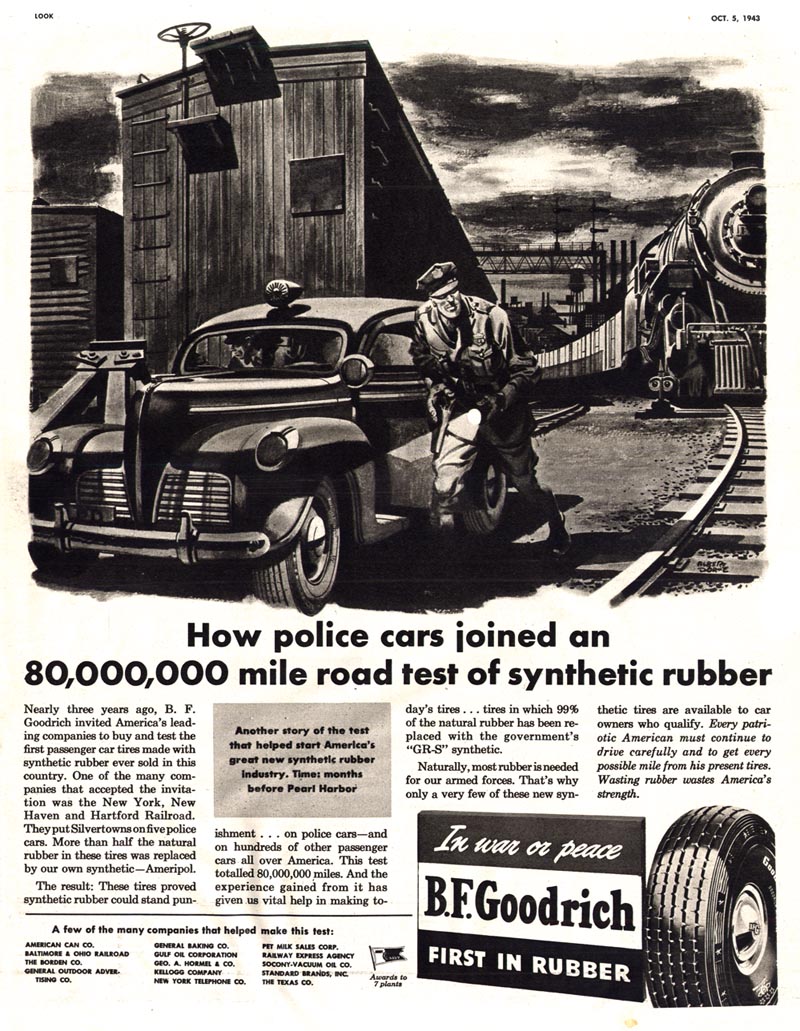 B.F.Goodrich tires ad - 1943
Now for five illustrations made in 1943 or thereabouts. During World War 2 rubber was diverted to the war effort, so here Goodrich is publicizing an alternative. 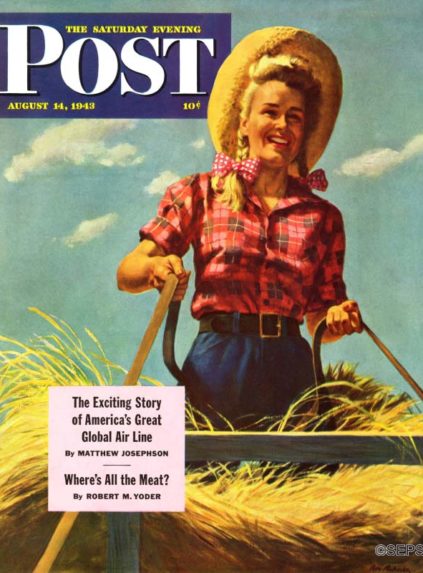 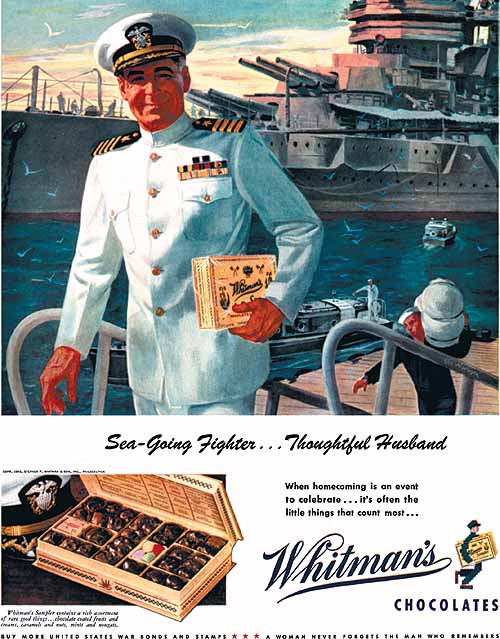 Whitman's Chocolates ad - 1943
Whitman's was a major brand in those days and advertised heavily. The battleship in the background appears to be of the New Mexico class or possibly a Pennsylvania. 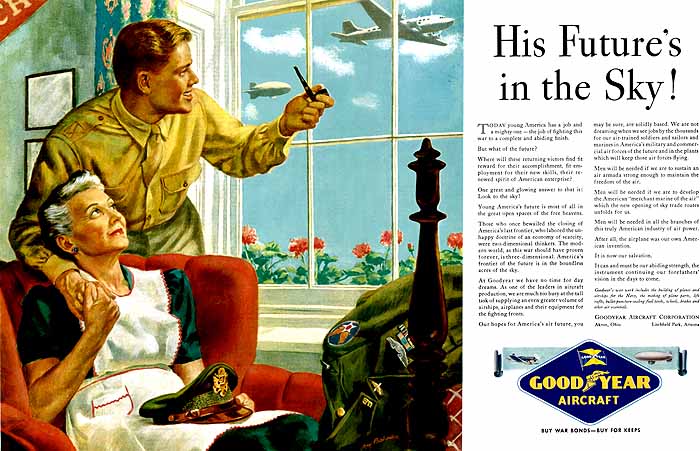 Goodyear Aircraft ad - 1944
Goodyear built blimps and aircraft (the latter of other firm's designs) during the war. 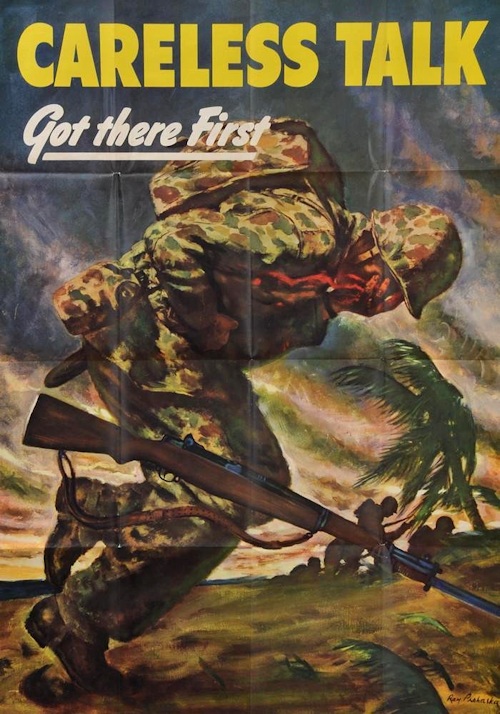 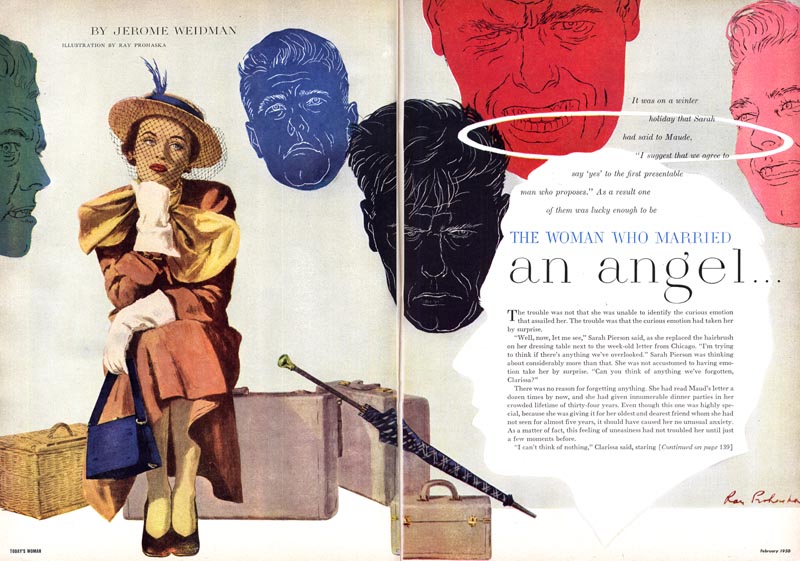 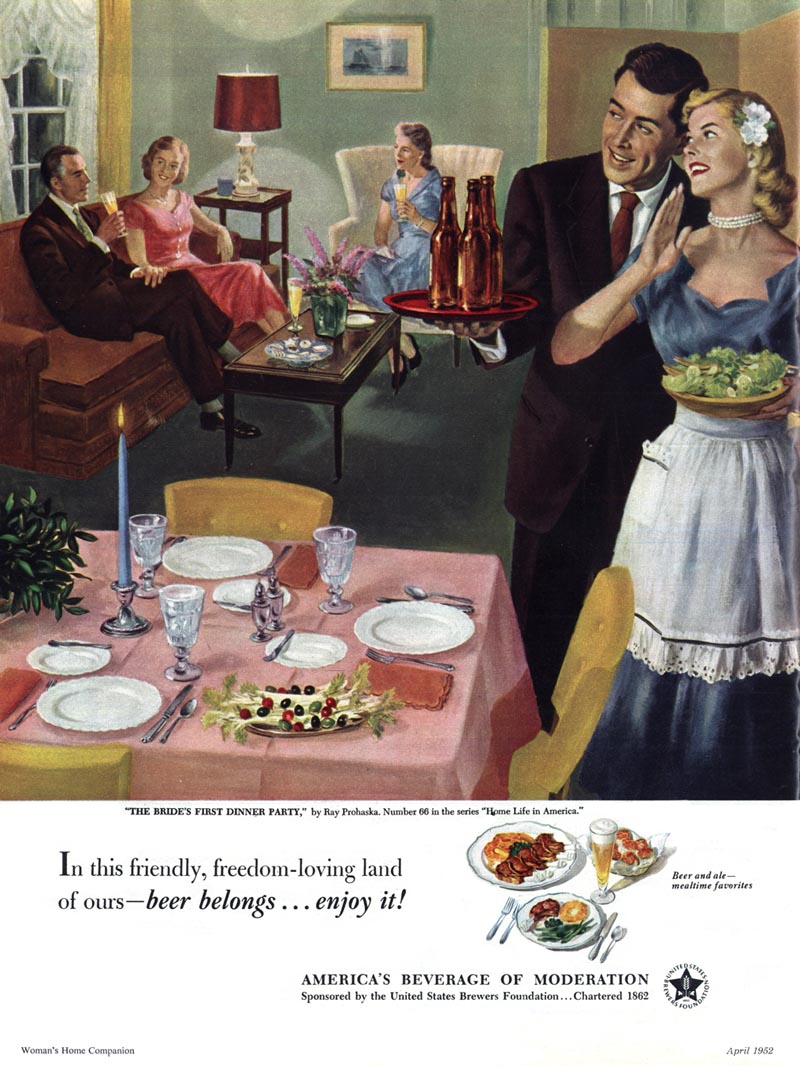 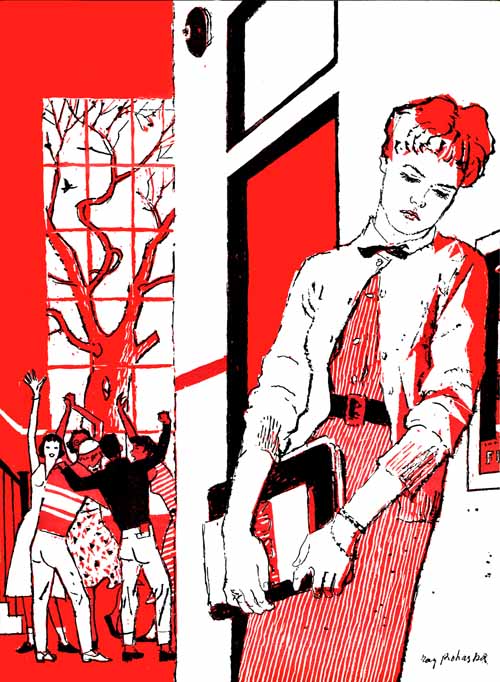 Parents Magazine editorial art - December 1950
From shortly before, Prohaska is in a light form of David Stone Martin scratchy-pen mode. 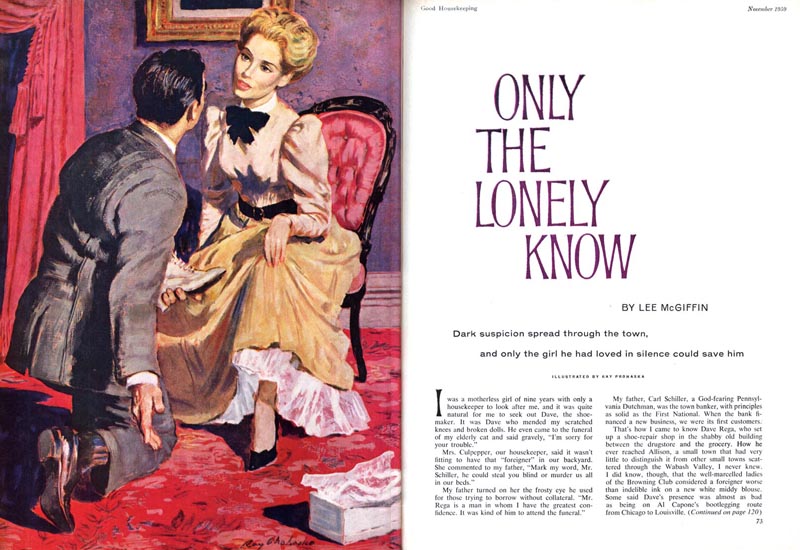 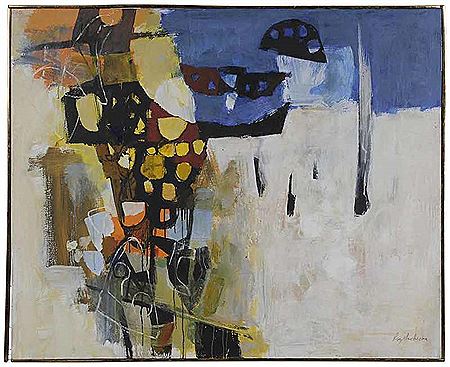 Hicks Island
Prohaska did Fine Art and portraiture. This abstraction is a pretty good example of its type.
Posted by Donald Pittenger at 1:00 AM