Rubens Does Some Advertising

San Francisco's Legion of Honor has on display through 8 September 2019 an exhibit titled
"Early Rubens".

There were many works, the paintings being mostly large. Even at the stage of his career shown, Rubens supported a crew of apprentices and assistants who needed to be paid or otherwise compensated for their work. All professional art is a business of some kind, and Rubens and many other famous painters around his time needed to operate like any serious business. That included doing what we now call Marketing to drum up future commissions to support the artist and his staff.

An instance of such marketing can be seen in the image below, a detail of "The Dreaming Silenus" (ca. 1610-1612) depicting: "The drunken, goat-legged Silenus and his companions appear in the last stages of a Bacchic revelry..." as the plaque pointed out. I will spare you that. What mostly interested me was the trove taking up much of the right half of the painting that's shown in the detail view below. 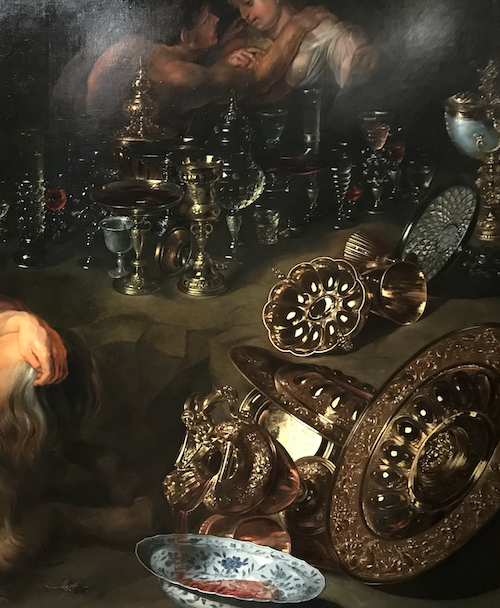 Note how skillfully those shiny objects are depicted.  At this late date, I cannot say if Rubens himself did all, some, or none of that work.  What matters is that this display was almost surely intended to catch the eyes of potential clients who might well be impressed enough to seek out Rubens and give him and his team a commission.
Posted by Donald Pittenger at 1:00 AM