James Grover Thurber (1894-1961) called his New Yorker cartoons "doodles." Which they were, in the sense that he was essentially a writer who did cartooning on the side. Plus, he was going blind.

Some biographical information is here, and details along with informed speculation regarding his eye condition is here.

Thurber had one eye injured by an arrow in an accident when he was a boy. That eye had to be removed. His other eye developed problems and his vision began to deteriorate as he entered his forties. Eventually he was declared legally blind.

I don't have dates for the cartoons displayed below. By their appearance, I assume that they were mostly drawn before his eye condition had progressed very far.

Bottom line regarding Thurber: He should not be judged using professional criteria. 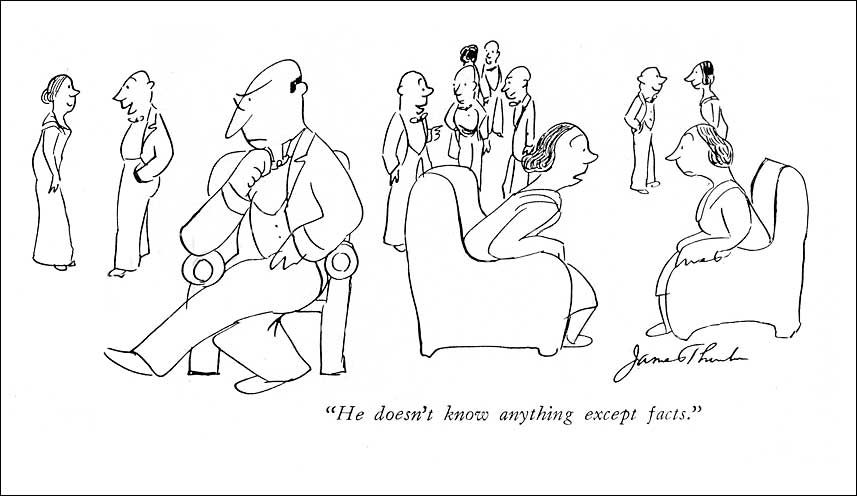 "He doesn't know anything except facts." 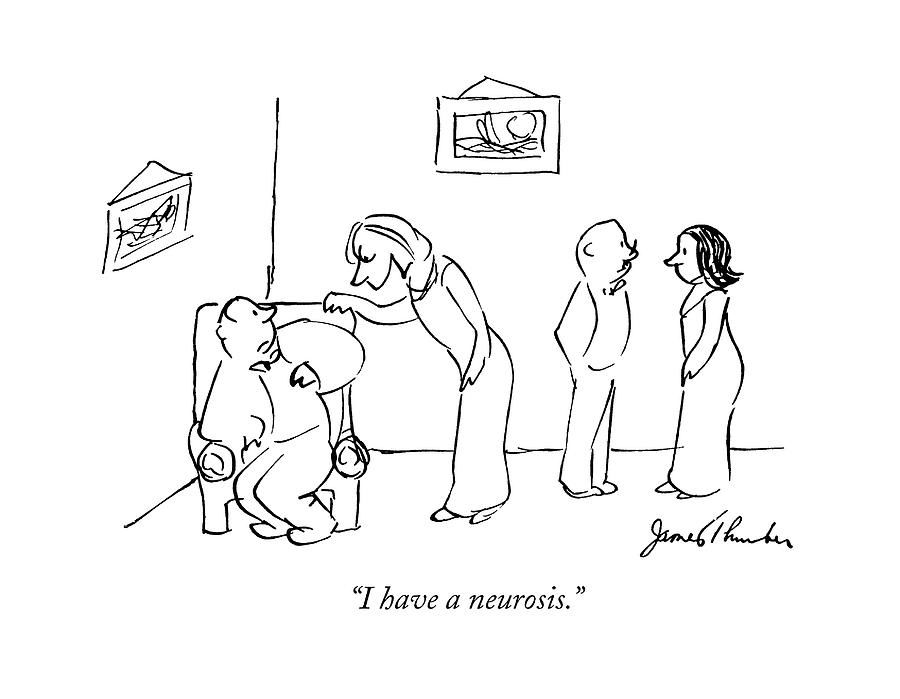 "I have a Neurosis." 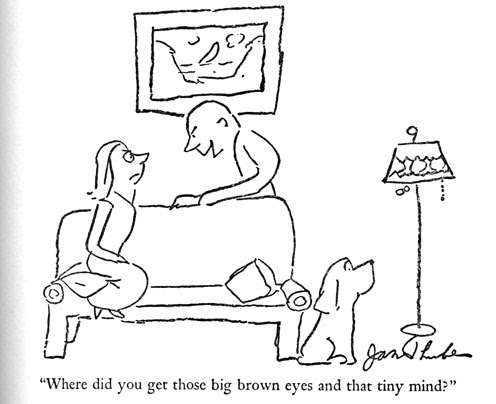 "Where did you get those big brown eyes and that tiny mind?" 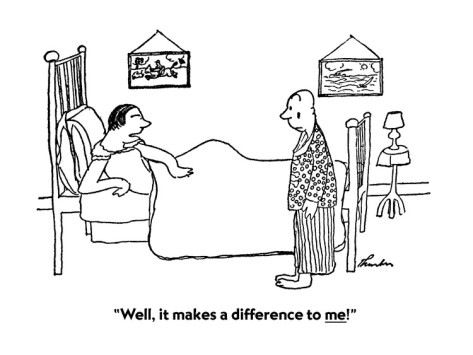 "Well it makes a difference to me." 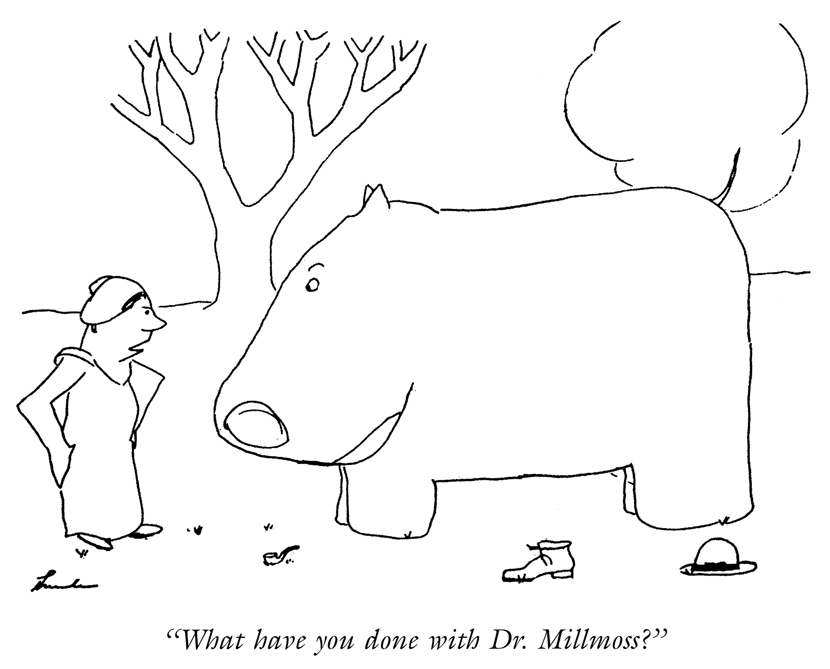 "What have you done with Dr. Millmoss?" 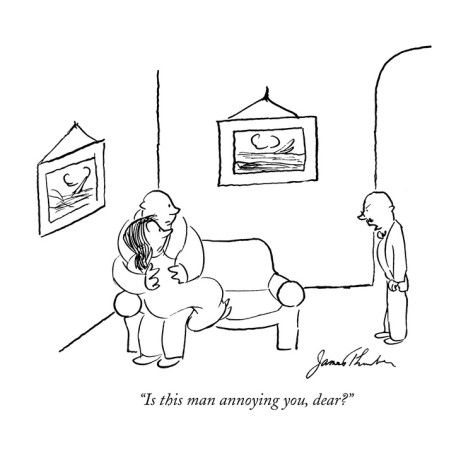 "Is this man annoying you, dear?" 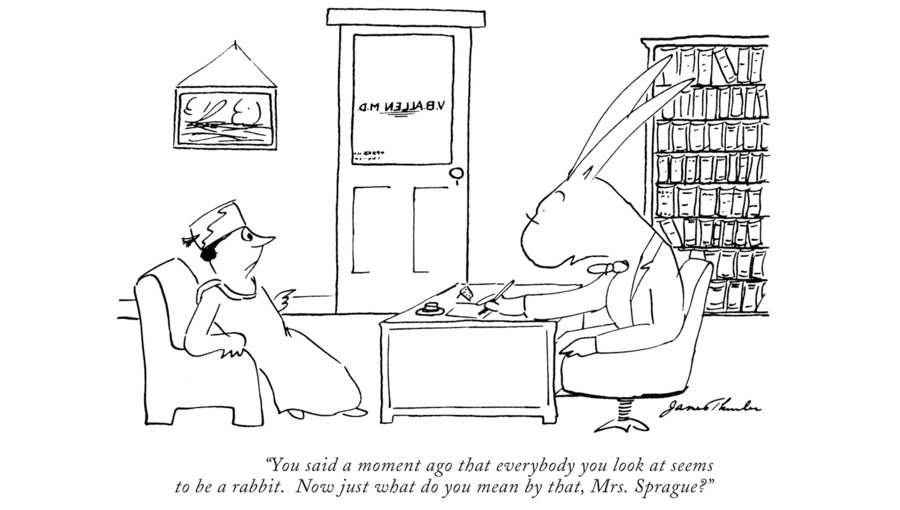 "You said a moment ago that everybody you look at seems to be a rabbit.  Now just what do you mean by that, Mrs. Sprague?"
Posted by Donald Pittenger at 1:00 AM

I think most or all of those cartoons plus more and also various kinds of writings are in The Thurber Carnival, which is a sort of greatest hits edition.

Keith Olbermann's father was dying during the time when Keith had a daily show on MSNBC. He was reading Thurber stories to his father in the hospital and read some of them on his program.

I agree that Thurber's drawings can't be judged by traditional criteria. That's quite a monument to the strength of his work (no matter how weak and wispy his drawings appear). If his content wasn't so smart and sophisticated and funny, no one would let him get away with this excuse for drawing. As it is, his line is perfectly suited to his humor.