I've been wanting to see paintings by the great Swedish artist Anders Zorn (1860-1920) for several years, but only came across a few of them here and there. In fact, I'd pretty well resigned myself to hoping that I'd finally get to visit Sweden and then convince my wife that we seriously had to rent a car and drive up to Zorn's home town of Mora, which has a museum devoted to him.

The wheels of artistic justice grind slowly but truly, so a Zorn exhibit took place in Boston earlier this year (which I missed). Then another exhibit opened in San Francisco in November, which I was able to visit. It runs through 2 February 2014, and I strongly urge you to see it if you are going to be in the Bay Area before then.

I wrote about Zorn's non-portrait painting here, so now I'll mostly cover the portrait work I saw at the exhibit (which includes a good cross-section of his etchings, watercolors, outdoor nudes and other examples from his prolific career).

One thing I noticed when finally seeing some of his most famous paintings in person: Zorn often painted freely -- or gave that impression. Actually, his brush strokes were carefully pondered, but the final effect is free. Few lines are present. Instead, he used areas of color to form images. He also softened many edges, this providing some contrast to stronger, more visible brushwork.

These effects are present on his subjects' faces, the part of the portrait that usually is reserved for the most crisp painting. In fact, Zorn's portraits usually don't sharpen up until the viewer is standing about 12 feet (4 m) away or else is looking at comparatively small reproductions such as on a computer screen or in a book. 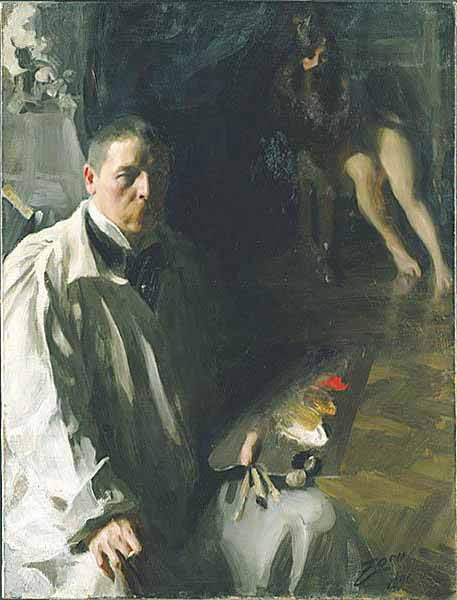 Self-Portrait - 1896
This shows him with his famous "Zorn Palette" of four colors. Most of his paintings I saw were in good condition, but I noticed some cracking in this one, especially in the dark area above Zorn's head. 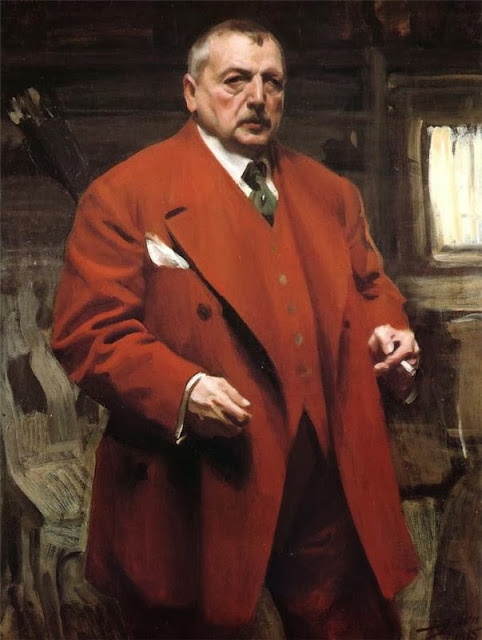 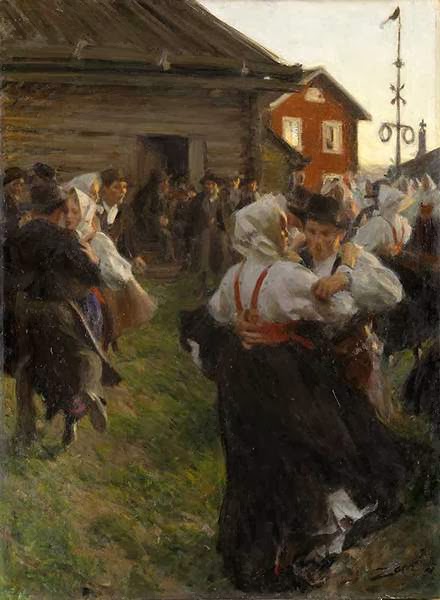 Midsummer Dance - 1897
Not a portrait, this is one of Zorn's most famous paintings. I was especially pleased to be able to see it in person.

Reveille, Boulevard Clichy - 1892
This is a watercolor painting. 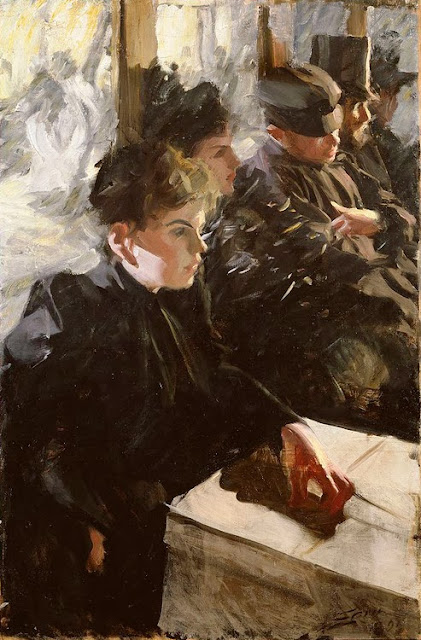 Omnibus - first version - 1891-92
The link to my previous Zorn post has both versions of "Omnibus." This one seems to be more of a study than the second version, because it seems pretty sketchy even though it's fairly large. 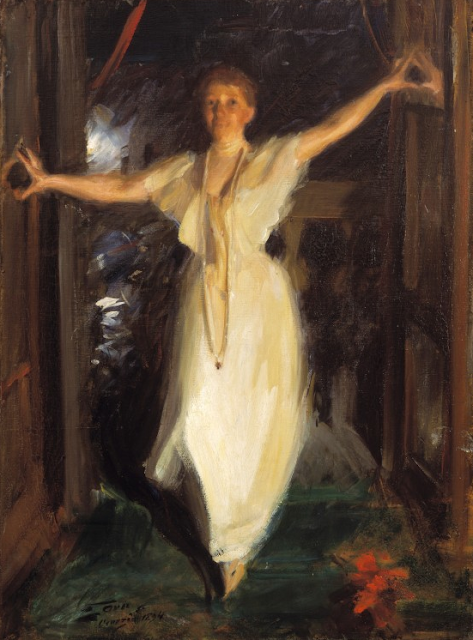 Isabella Stewart Gardner in Venice - 1894
Another well-known Zorn painting. This reproduction looks much sharper than the actual painting, an effect I mentioned above. 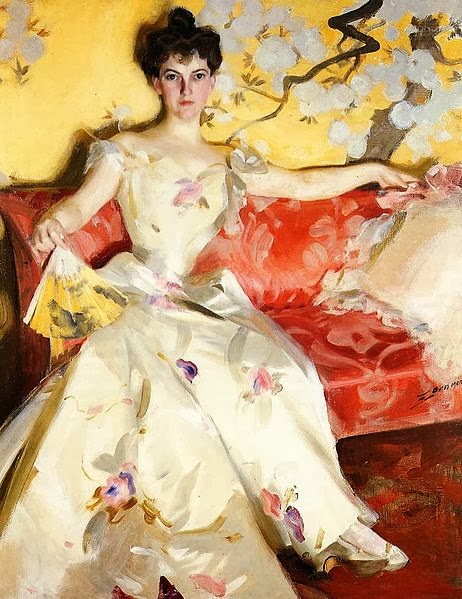 Elizabeth Sherman Cameron - 1900
Zorn's handling of the gown is very free: reminds me of some of John Singer Sargent's portraits. 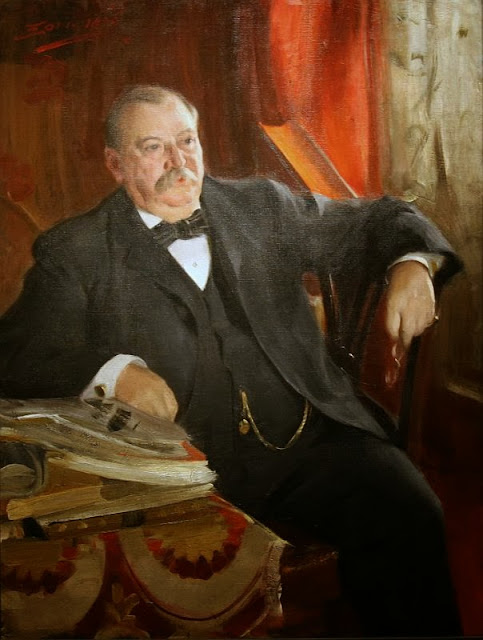 Grover Cleveland - 1899
The former President of the United States. Those books near his right hand are indicated by just a few broad brush strokes, but look convincing here (or if standing 12 feet away from the painting). 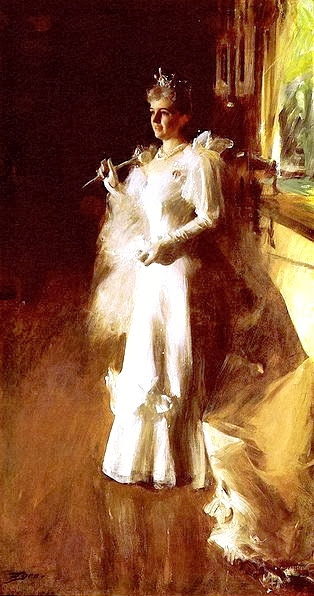 Mrs Potter Palmer - 1893
The background in the original painting is slightly darker than in this reproduction, making the effect even more smashing. This impact is enhanced because the painting is large: 101 inches (258 cm) high. You really need to see this one in person to appreciate it.

Still, would I want his work on my wall? Selectively, I suppose so.

dearieme -- Most of the paintings shown were large and commissioned for folks with really large walls in their homes/mansions. In the early part of his career, Zorn did watercolor landscapes and other smaller works. Later, he did a large number of etchings that necessarily are small.

Don, "my wall" refers to anything from my actual wall to the walls of the castle I'll own in my next life.