Fascist-Era Paintings on Display in Rome

In other posts I've noted that Italy, unlike Germany, has not consigned its totalitarian past to oblivion. I suppose this is due in part to the fact that Benito Mussolini during the first dozen years of his rule was not particularly bloodthirsty, in contrast to the likes of Hitler, Stalin and Mao.

And so it is that some paintings glorifying him and his Fascist regime can be found in Rome's Galleria nazionale d'arte moderna, a museum that focuses on art created roughly 1850-1950 (though works before and after those dates are easily found). I think this is good museum policy because Mussolini ruled Italy for two decades and the art created during that time is a legitimate part of history.

Unlike the other dictators mentioned above, Mussolini had few problems with art done in a modernist mode. After all, a major Fascist theme was that Italy needed to be modernized, so modernist-inspired art fit well with the program so long at it didn't portray strongly anti-Fascist sentiments. Another factor was the presence of Mussolini's mistress Margherita Sarfatti, who was a patroness of the arts and did not dislike modernism.

I have touched on Fascist era painting here (Tullio Crali) and here (Aeropittura). The present post presents some photos I took on a recent visit to the Arte Moderna. 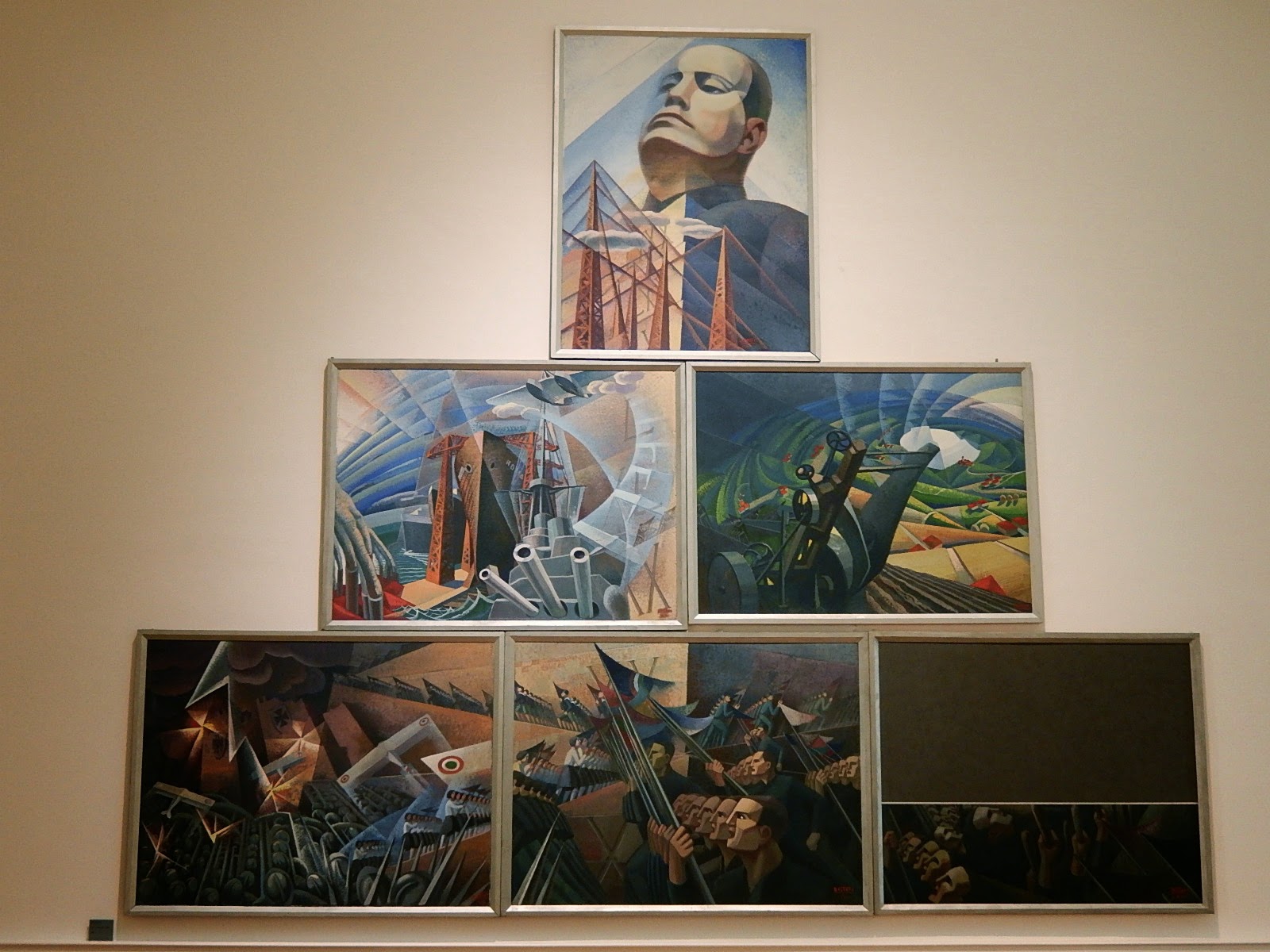 Covering most of one wall is this set of paintings by Gerardo Dottori (1884-1977). The plaque gives the ensemble's title as Polittico della Rivoluzione fascista, 1934 (Dottori dated it as year XII of Fascism). Its theme builds from the bottom. At the lower left is Italy's participation in the Great War against Germany and Austria-Hungary. The bottom-center image deals with the revolutionary rise of Fascism (I think). The lower-right painting seems to have been partly destroyed, so I can't make out its theme. The center level paintings show agriculture (right) and on the left, Italy's industrial achievements under Fascism. Included are the ocean liner Roma (entered service in 1926), a modernized battleship (Mussolini was having Great War vintage warships rebuilt), and a Savoia-Marchetti S.55 flying boat (the type Italo Balbo used for a multi-aircraft crossing of the Atlantic). At the apex is Mussolini himself with symbols of electrification. 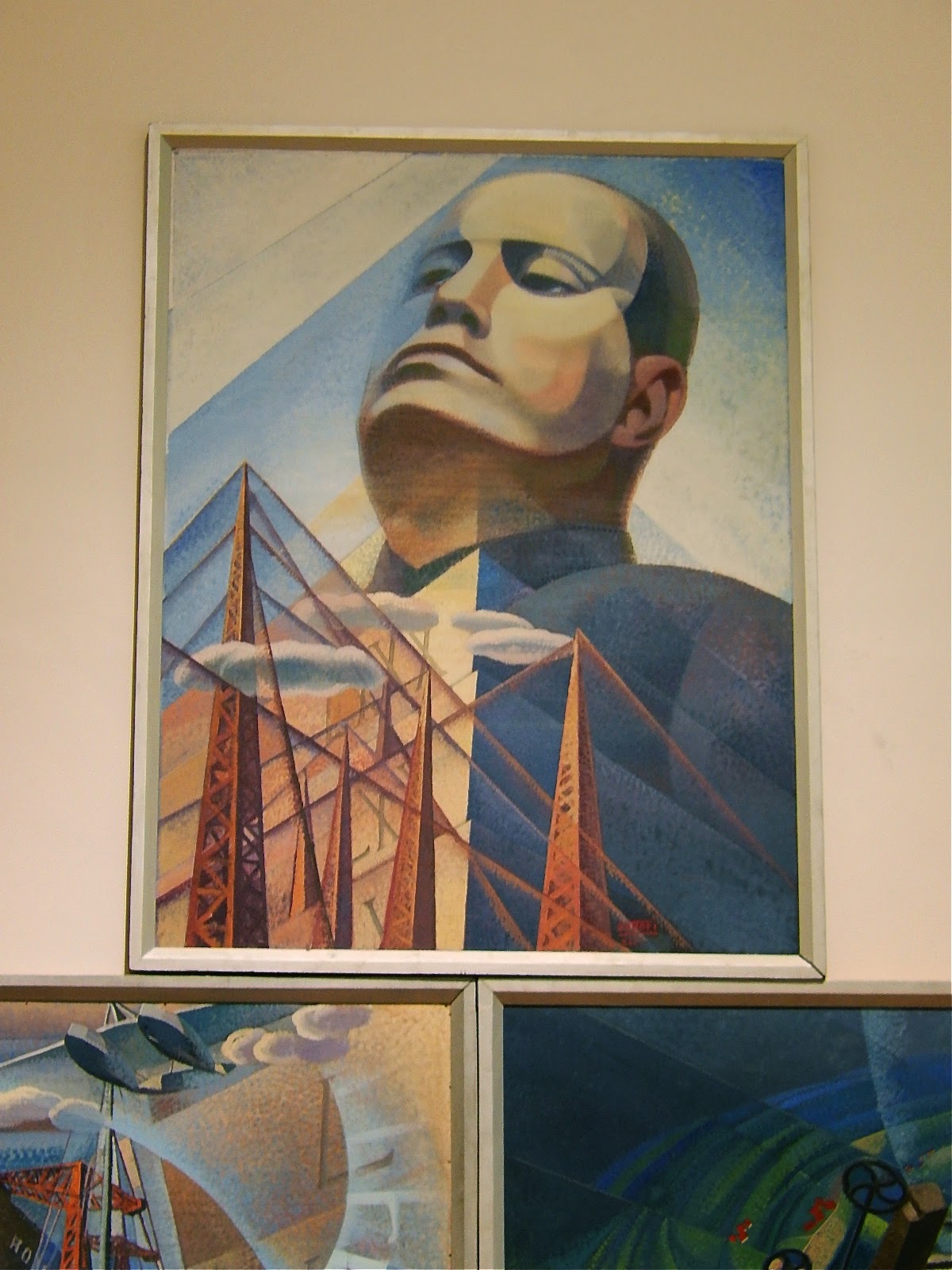 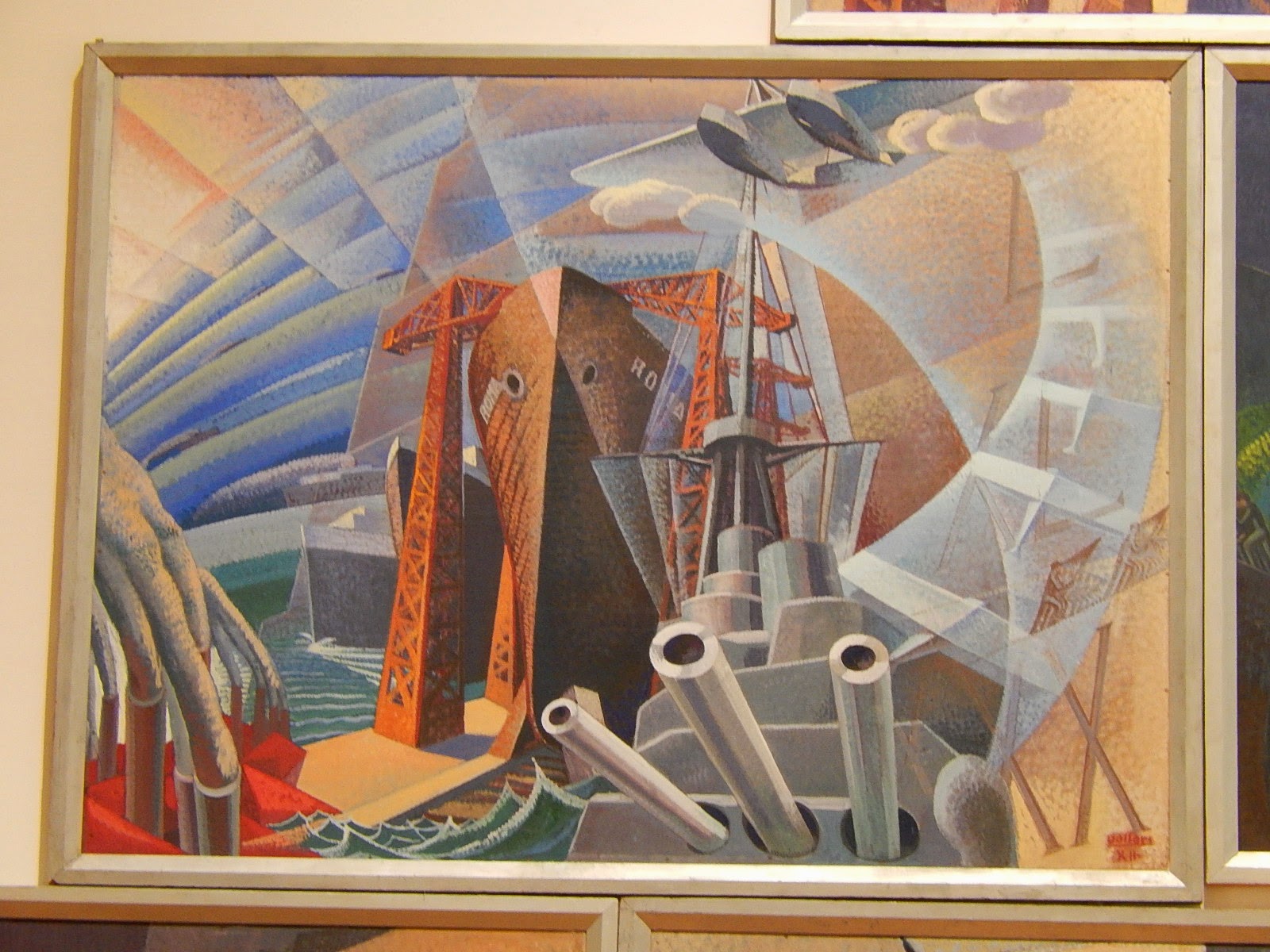 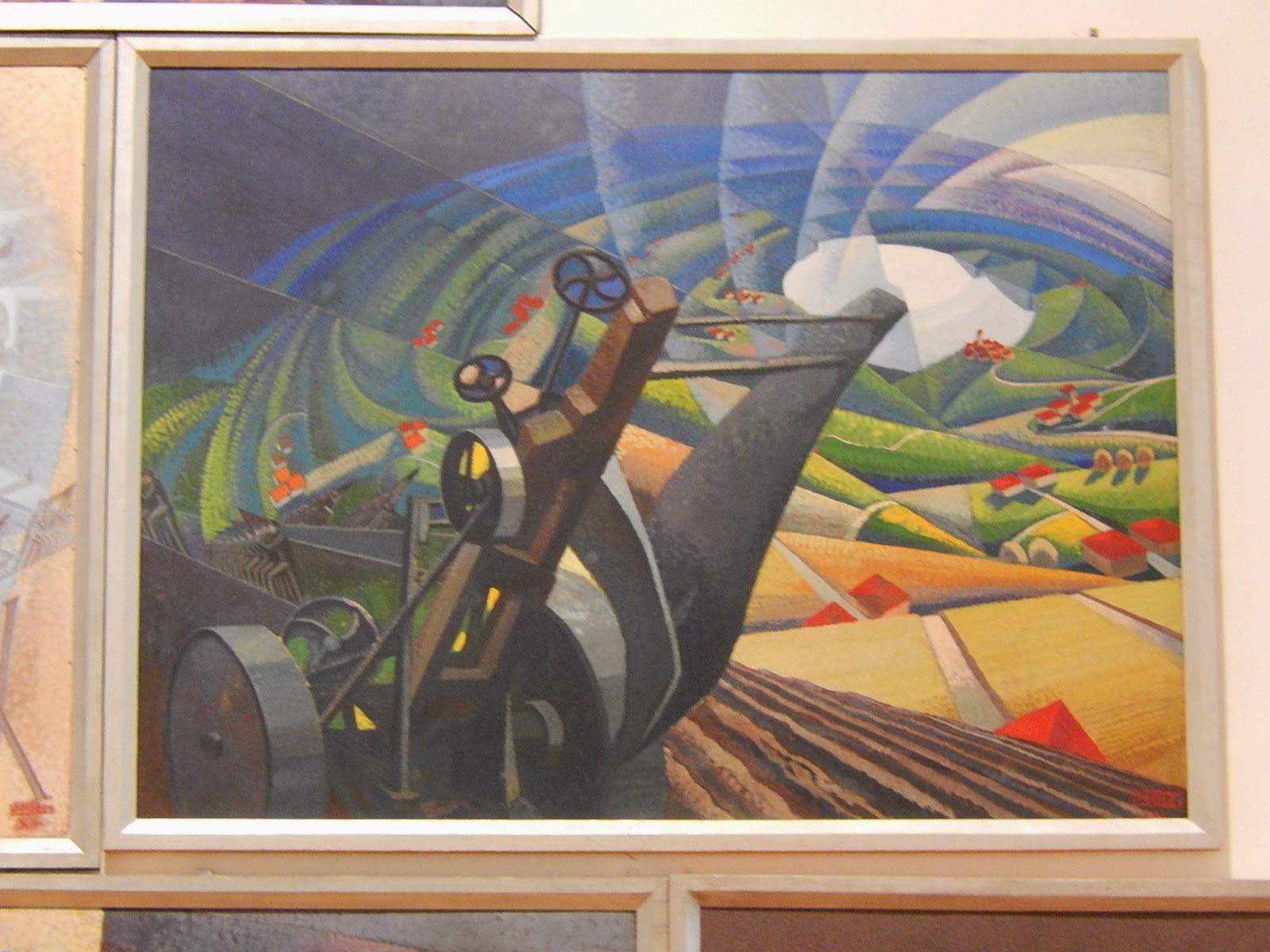 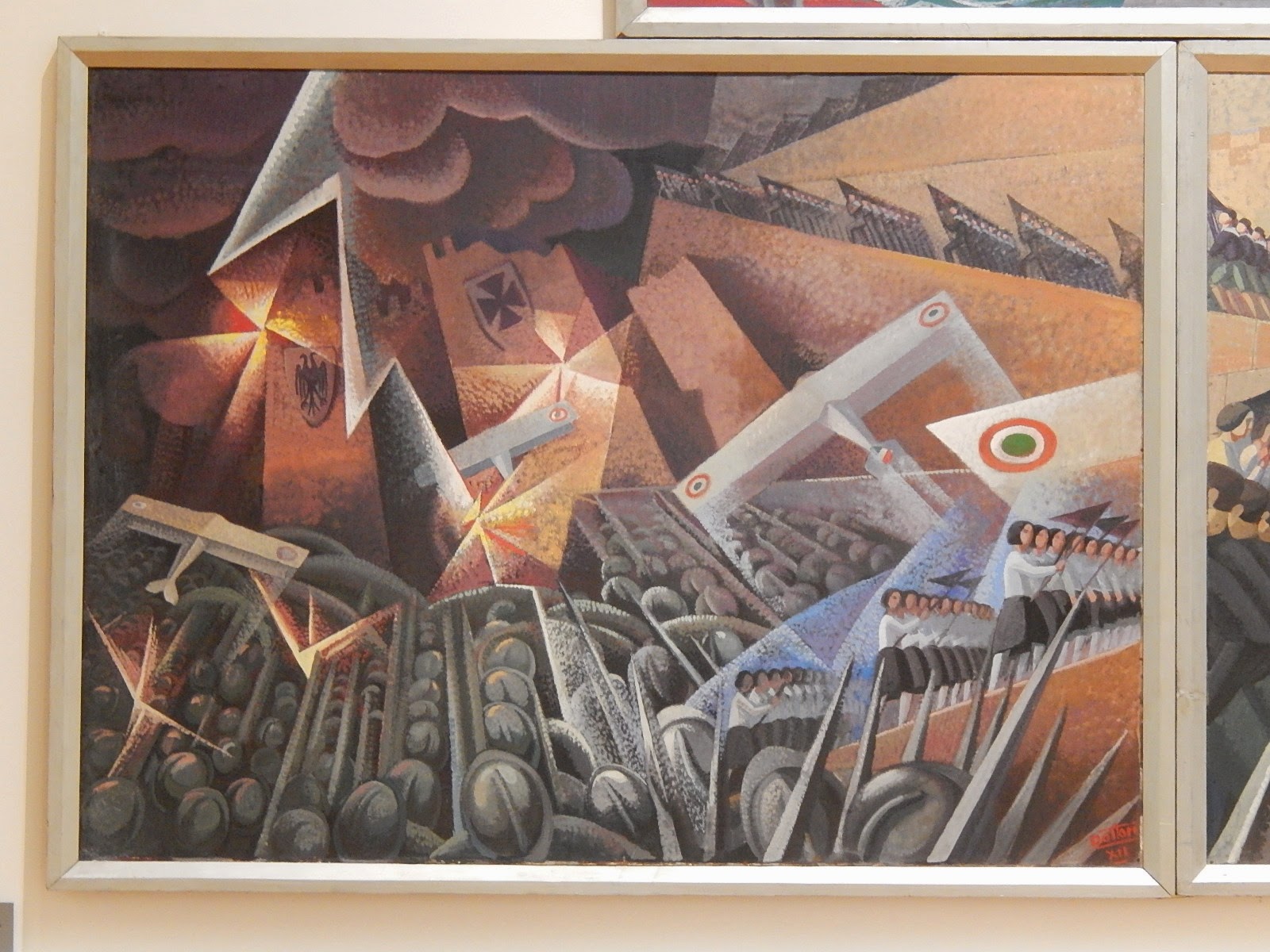 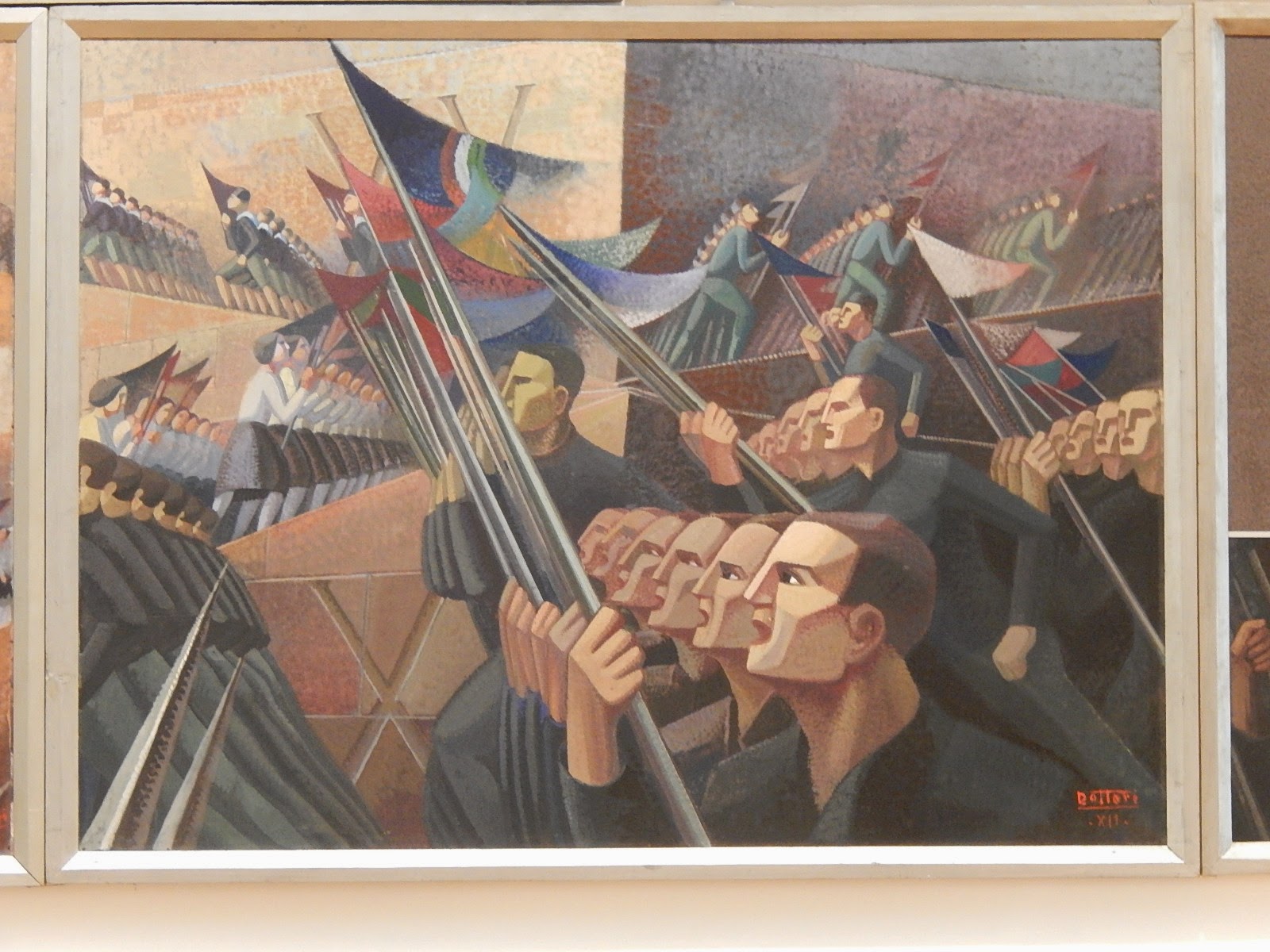 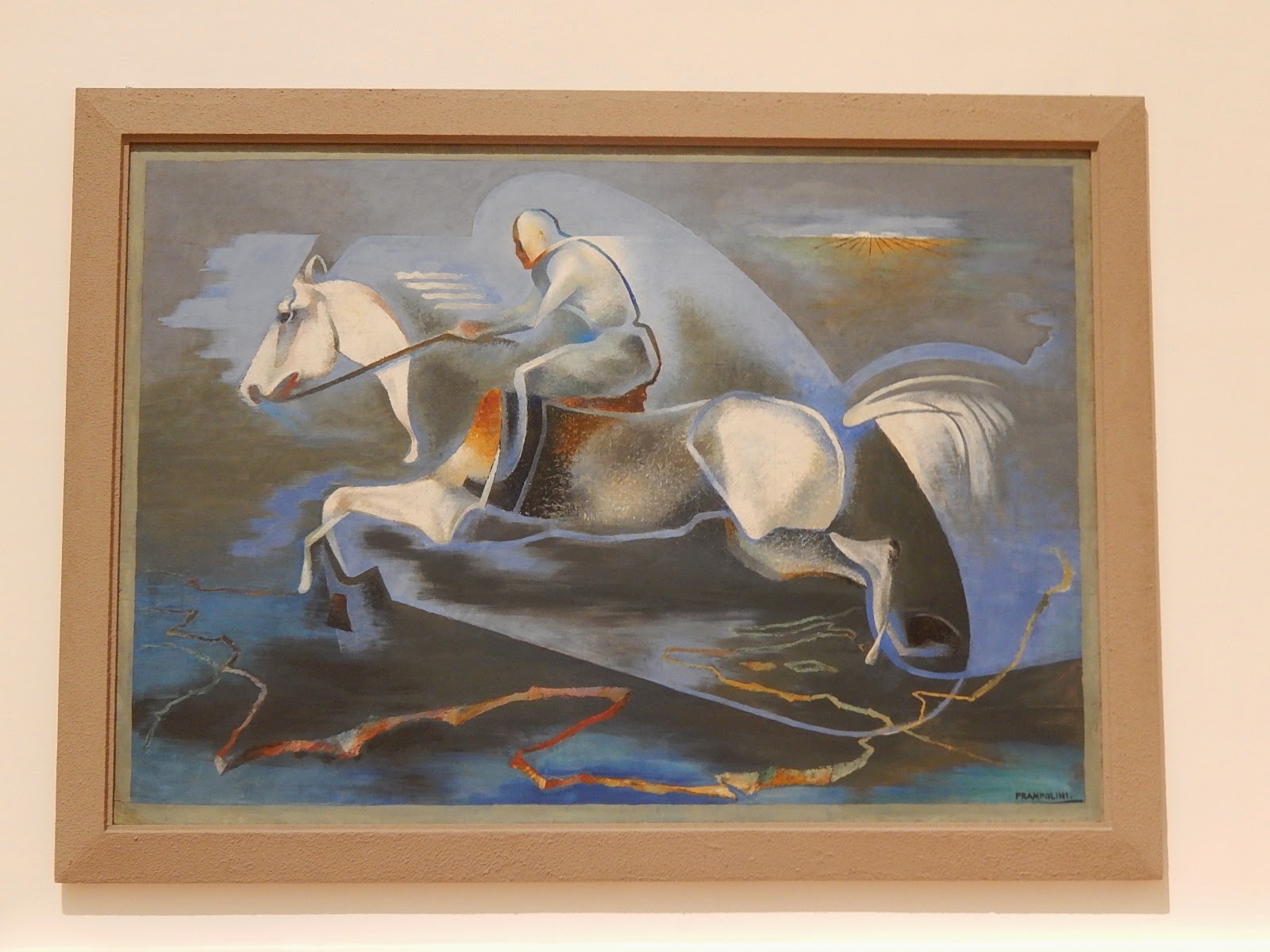 The other explicitly Fascist painting I photographed is this one, titled Dinamica dell'azione (Miti dell'azione, Mussolini a cavallo) painted by Enrico Prampolini (1894-1956) in 1939.
Posted by Donald Pittenger at 1:00 AM

Close-ups of your five images from 1934 show bold, modernist, athletic images, very much like the Art Deco murals from the Depression Era onwards. I can well imagine the rows of soldiers with their pikes, and the rows of workers with their banners, adorning large works created under the aegis of the Federal Art Project in the USA.

Hels -- You are quite right. Art and architectural fashions since the 19th century and the rise of rapid communications were little slowed by borders unless political pressure (think Hitler, Stalin) forbade certain styles.