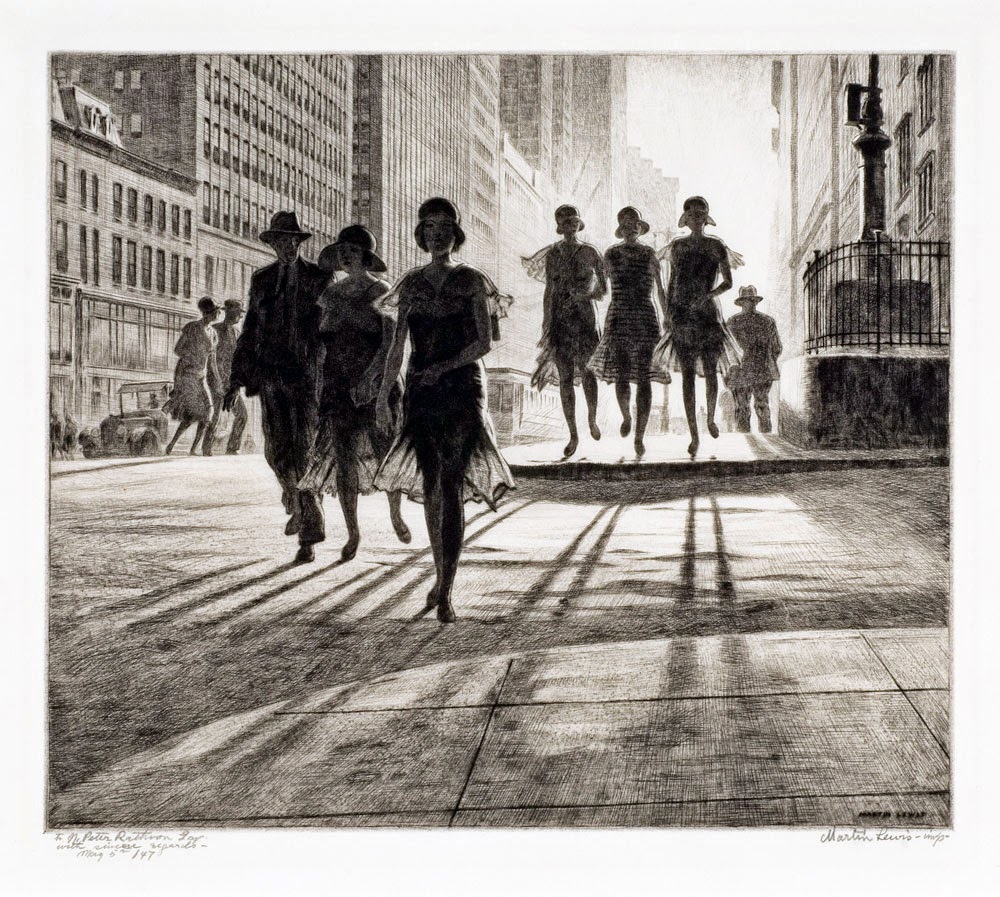 Shadow Dance - 1930
[Images copyrighted by Martin Lewis estate: click to enlarge]
The etching above astonished me when I first saw it. Yes, the backlighting and shadows cast towards us make the scene dramatic, and must have been even more dramatic to viewers 85 years ago when such a lighting scheme was a rarity in illustration and fine arts.

What impressed 1920s buff me was the depiction of the young women in flapper dress and how alive they seem. In fact, they seem more alive than people in almost every black-and-white 1920-1930 vintage still photograph I've seen, and I have seen plenty of such images. (The score: artist 1, camera zero.)

I do wonder about the setting. Unless Lewis was using a lot of artistic license, the summertime sun angle shown is impossible for Manhattan's avenues that run roughly north-south (north northeast to south southwest, actually). However, sunshine comes directly down the cross-town streets late in the day around the time of the summer solstice. So what we seem to have is a late June afternoon or early evening view of a major Midtown street -- 34th, 42nd or 57th. I'll guess it's 42nd Street, though it's quite possible that Lewis simply invented the background.

For some reason, I'm somewhat indifferent to etchings, which might be why I had never heard of Martin Lewis (1881-1962). Lewis was an Australian who eventually came to America, worked in illustration at first, then shifted to etchings and would up his career as an art instructor. He is known to have helped his friend Edward Hopper in learning the craft of etching. His Wikipedia entry is here, and more detailed biographical information here.

I find it hard to comment on artistic properties in Lewis' work. That's because his depiction of late 1920s - very early 1930s Midtown Manhattan and the young women there strikes me as be so true to life or perhaps to my imagination, and that overrides artistic considerations for now.

My first brush with New York City came 26 years after Lewis made that etching Yet aside from the dismantling of Midtown elevated lines, the cityscape hadn't changed very much since 1930 due to the Depression and World War 2 putting a near-halt to construction. Perhaps that is another reason his images resonate with me.

Whereas Lewis was a master of outdoors flapper New York, he didn't seem to venture inside. The artist who perhaps best captured Jazz Age glamour at parties and other social occasions was his almost exact contemporary, illustrator Henry Raleigh, whose life and art are discussed by David Apatoff here. 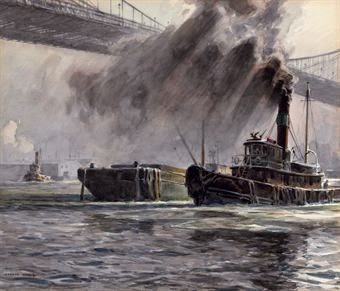 New York Harbor, Under the Manhattan Bridge
I include these two images to show Lewis' painting style. 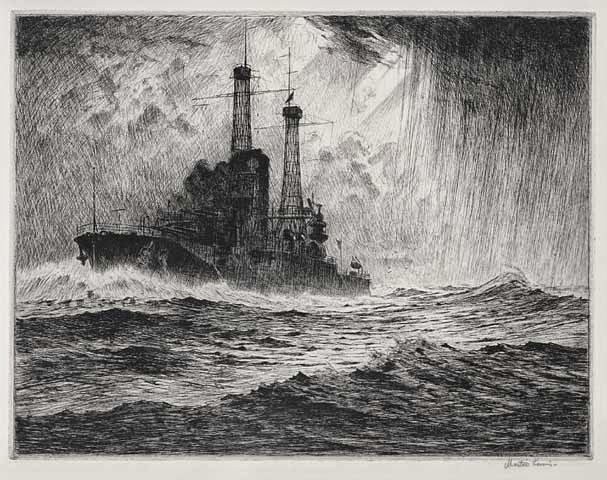 American Battleship - 1916
United States Navy battleships built around 1910-1920 were equipped with cage masts, as seen in Lewis' etching. Those masts were replaced by sturdier structures when the battleships were given their first major refit. This is one of the earliest known Lewis etchings. 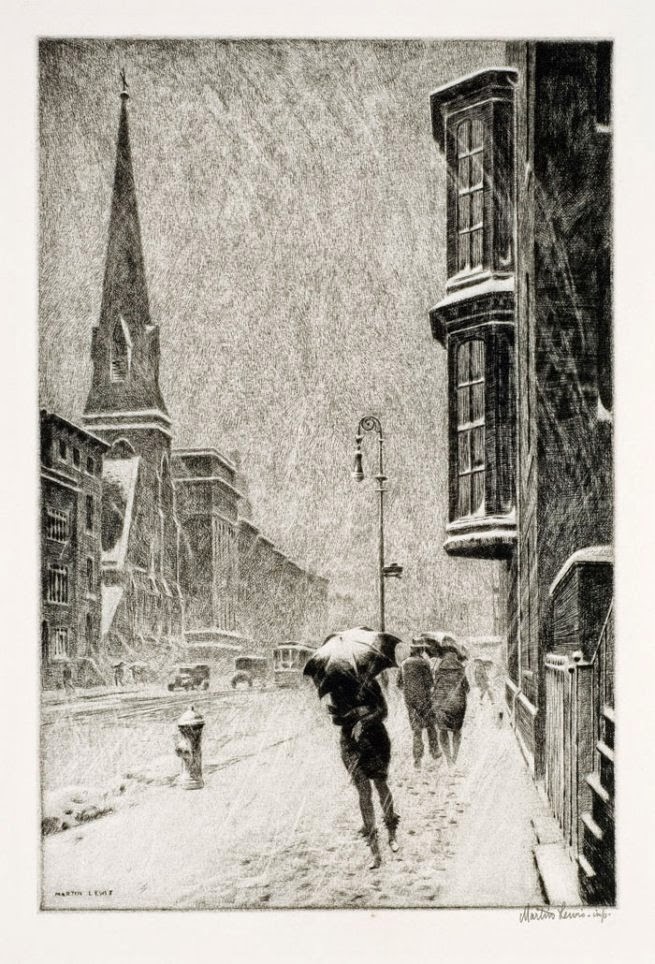 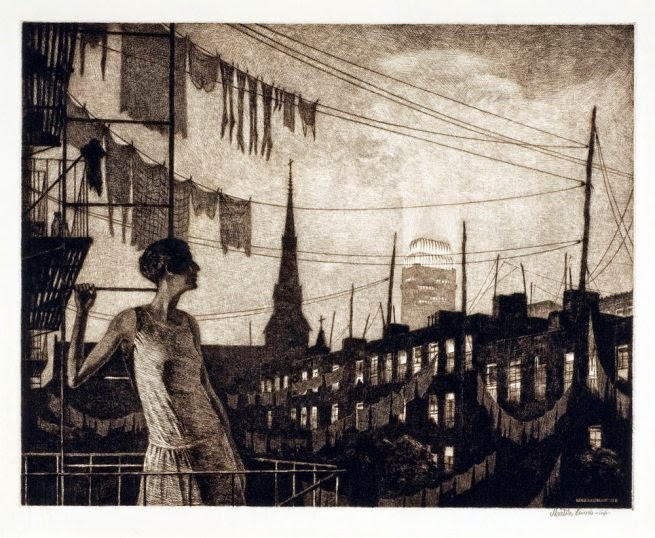 Glow of the City - 1929
Must be a Monday laundry day. The illuminated skyscraper in the distance is the Chanin Building on the corner of 42nd Street and Lexington Avenue that opened in 1929. I'm a little puzzled by the view because we seem to be looking to the southwest from someplace in the East 50s, yet the foreground neighborhood is more what I would expect to find if the site was in the East 20s and we were looking northwest. I suspect Lewis actually was depicting the latter view on the copperplate, but it got flipped when printed.

But that reasoning might be wrong. The orientation of the Chanin building indicates that the foreground would be on a wide north-south avenue rather than a more-likely east-west street. So perhaps Lewis simply invented the scene from bits of New York, figuring viewers would be none the wiser.

Correction: Examination of an old aerial photo of NYC shows the orientation of the Chanin tower to be roughly north-south. So the etching setting indeed might have been down in the low 30s in backyards between cross-streets. 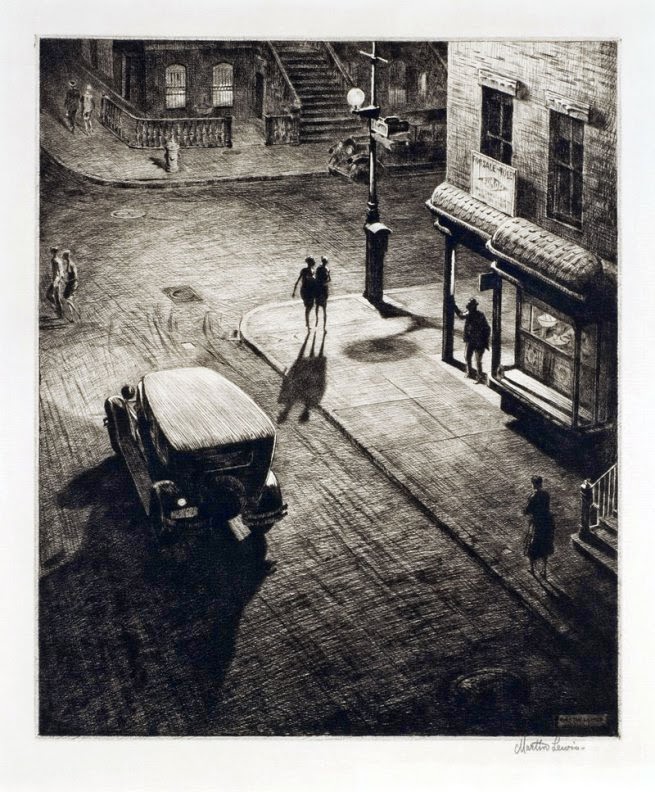 Relics (Speakeasy Corner) - 1928
Another scene with backlit shadows. Lewis did a convincing image of the car, something that many artists cannot do for some reason. 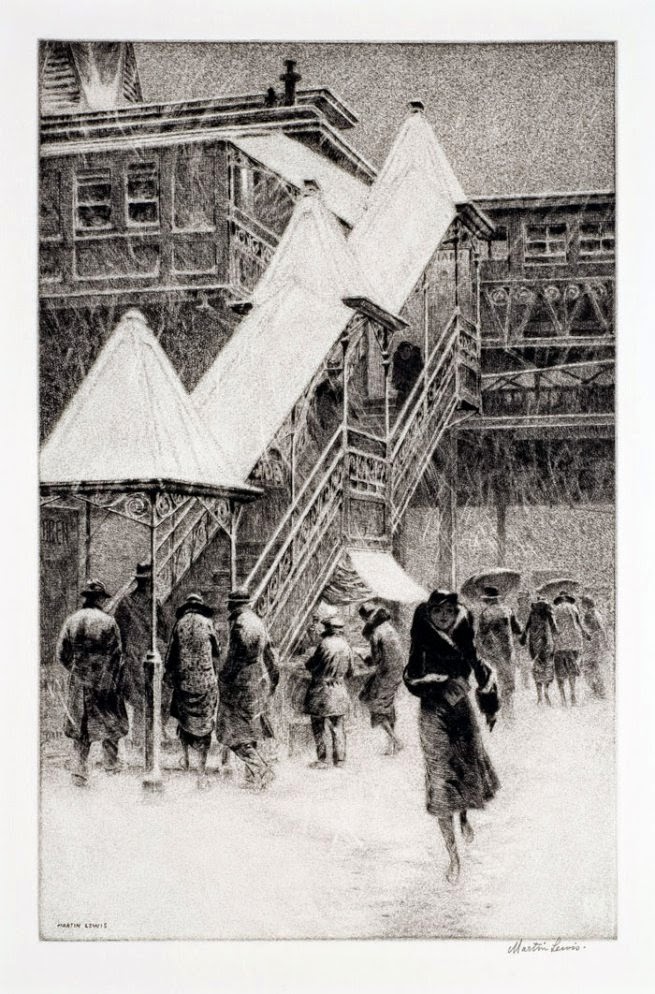 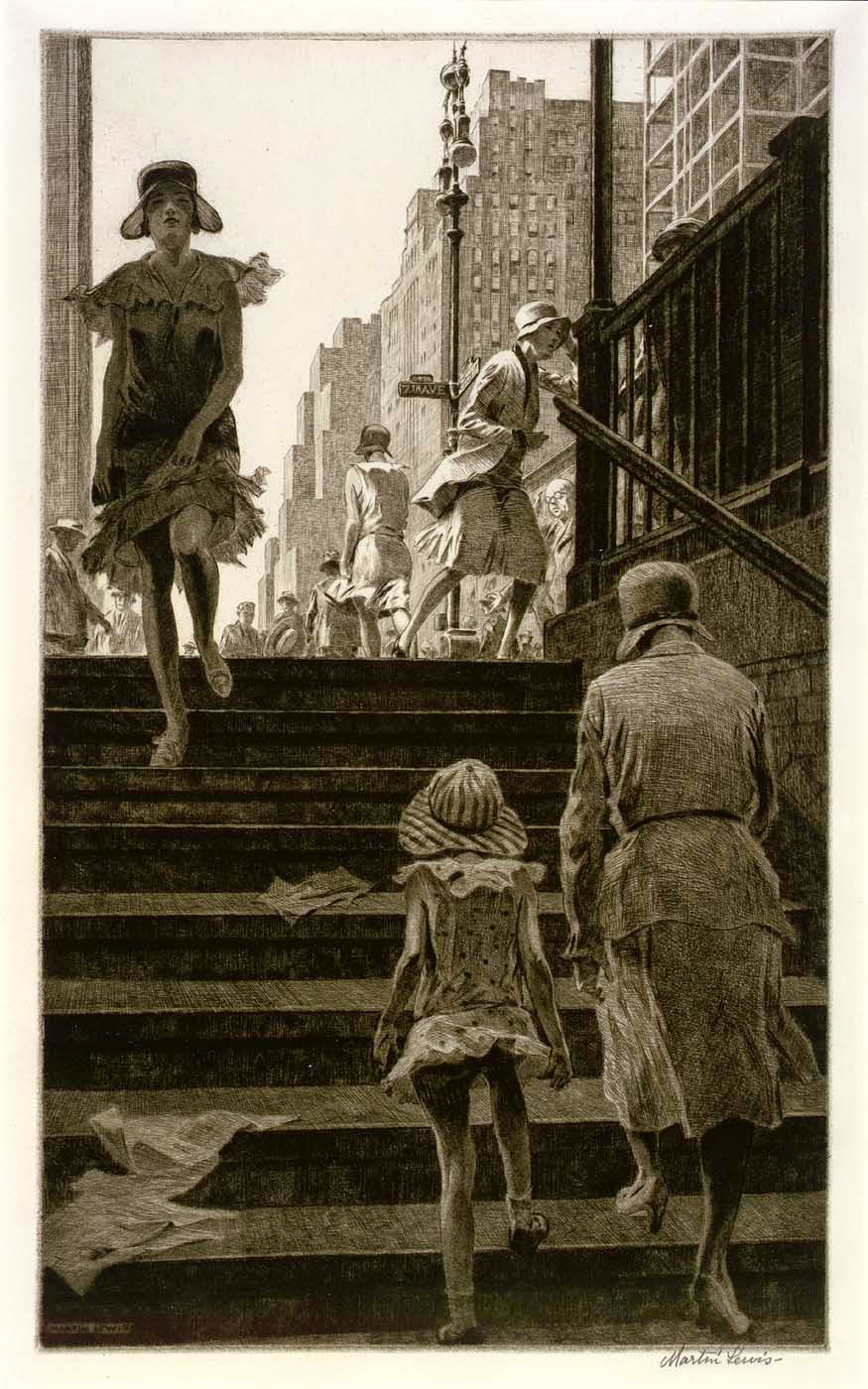 Subway Steps - 1930
I like this image a lot because that's what New York subway station entrances were (and are) like. It seems windy on the street, but the billowing skirt of the young woman descending the steps could be from an updraft caused by a train entering the station below.  Also closely observed is the woman at the right trudging up the steps.  Ditto the discarded newspapers on the steps. 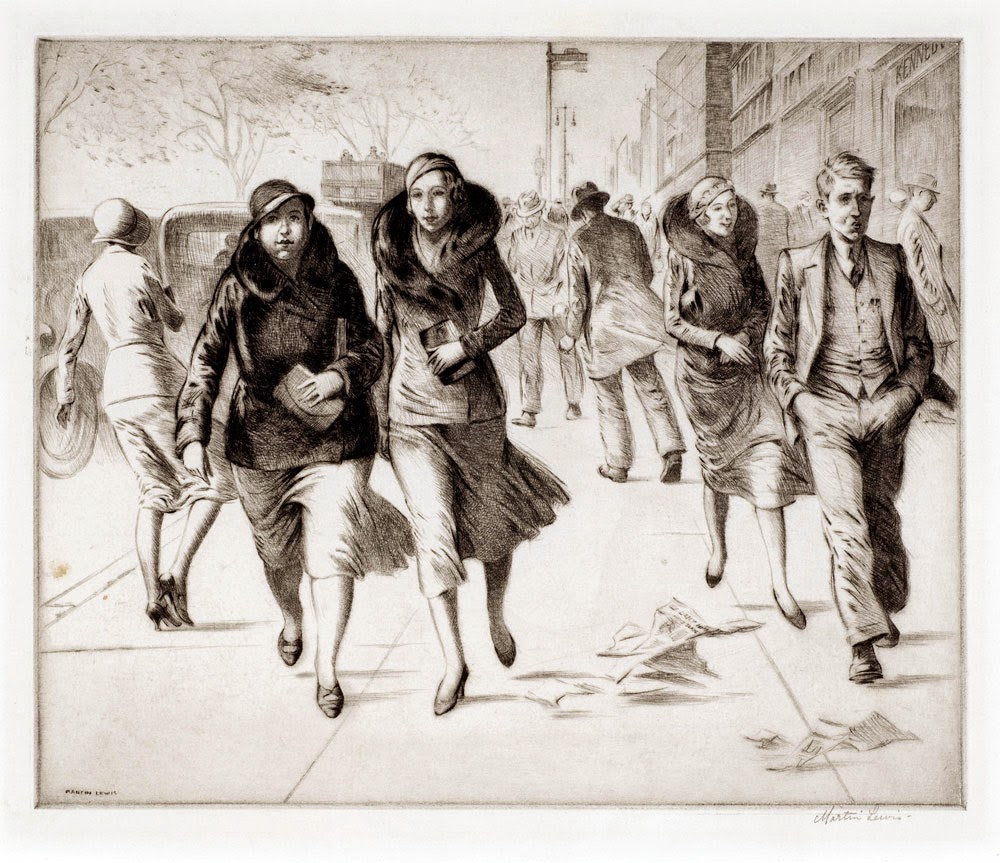 Windy Day - 1931
Lewis has people leaning to our left, into the strong wind. But a few of his windless etchings show people leaning in the same direction. For some reason, many of us slant our drawings, the very professional Lewis being no exception. 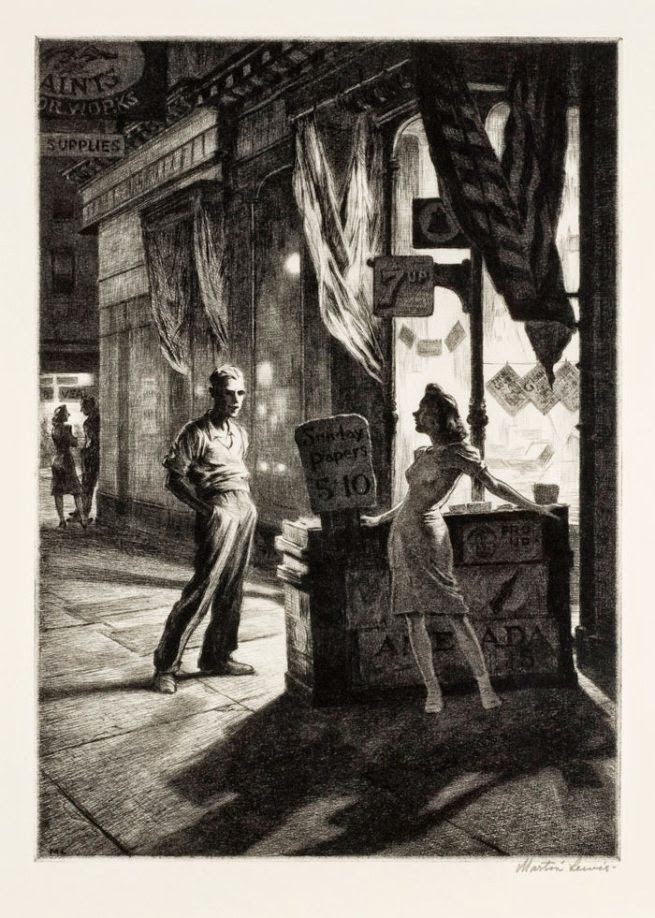 Chance Meeting - 1940-41
The Roaring Twenties and flappers are long gone and World War 2 approaches America. Clothing fashions had changed, and Lewis could not give them the spark he provided a dozen or so years earlier.

Regarding "Glow of the City": I found out where the church and the tenements were in this picture. The church is St. Gabriel’s Church, which was formerly located at 308-310 E. 37th St. (accounts of the address vary). That would make the tenements between 36th and 37th Sts. and 2nd Ave. on the north and Tunnel Entrance St. on the south. The church and tenements were torn down to make way for the tunnel project. I have a photo of this exact area but am unable to post it here.

I found the photo of the neighborhood shown in "Glow of the City", as mentioned in my above post. Here is the link: http://tinyurl.com/zvkyk65 (you may have to copy and paste the link). Scroll down the page to see the photo of the neighborhood, located just above a copy of "Glow of the City". You are able to see the steeple of St. Gabriel's Church just to the left of the Chrysler Building, and just between the church and the viewer, the group of tenements in question. The woman's location in "Glow of the City" would have been in the courtyard of the tenement complex which would be out of the viewer's sight in the photo.

Lilly Pond Lane -- Thank you very much for the information.