I probably didn't drill deeply enough into Google, so all that I can report now is that Gaetano Bellei (1857-1922) apparently was born and died in Modena, Italy. And he spent at least part of his career there, because some of his paintings include the name of the city along with his signature.

Bellei was a good draftsman and created many paintings featuring accurate drawing and a painting style tending fairly strongly to the hard-edge school. He seems to have been successful (though I can't be sure of this, lacking a biography), and that was because he often painted everyday scenes and characters with a sentimental twist. This approach has long been popular with a public that likes to see art that they can relate to.

Artists that cater to that public can do well financially (think Thomas Kinkade, for a recent example), but at the price of being scorned by "sophisticates." I happen to think that sophistication can be carried too far if it becomes an end in itself, which might be one reason why I title this blog Art Contrarian. Moreover, I have no problem with artists who can make a decent living from their work; becoming famous and pulling down high auction prices after one's death doesn't strike me as satisfactory. That said, even though I appreciate Bellei's technical skill, I would not have any of his paintings hanging on a wall in my place.

What caught my eye regarding Bellei was how he depicted wind in a few of his works. I include those below along with a few other paintings by him and others to provide context. 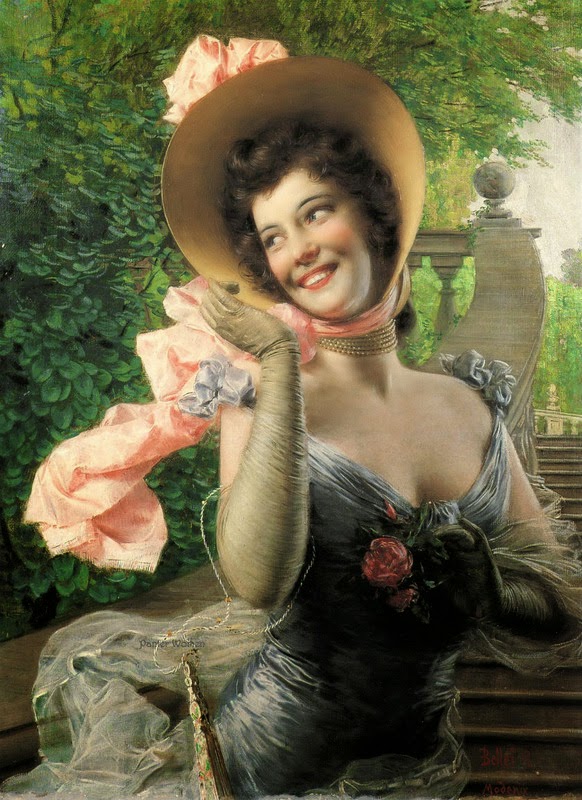 Bellei liked to paint pretty women. This one's skin is shown soft and perfect. The clothing and background are essentially hard-edge style painting, perhaps reflecting a likely academic training for the artist. 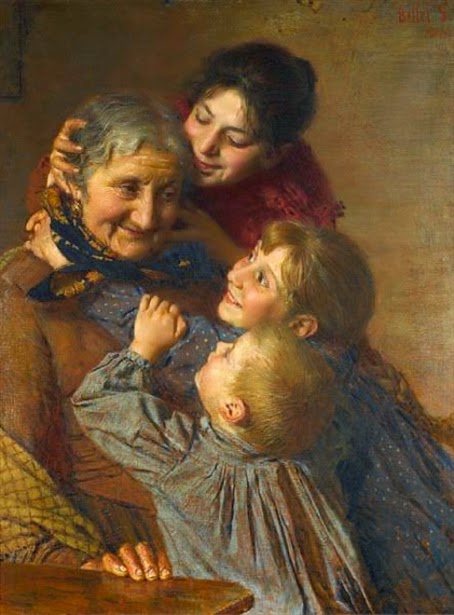 But it wasn't all pretty women. Here he has three generations of a family in a sentimental setting. 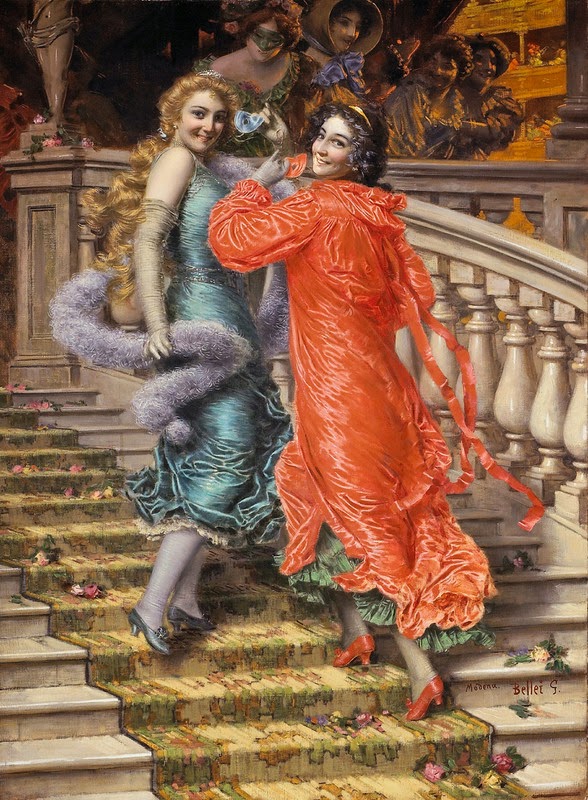 Back to pretty girls. Here are two on their way up a staircase to a masked ball. Except they are not wearing masks, having removed them temporarily so that we can better see who they are. Note that one is a blonde, the other brunette. 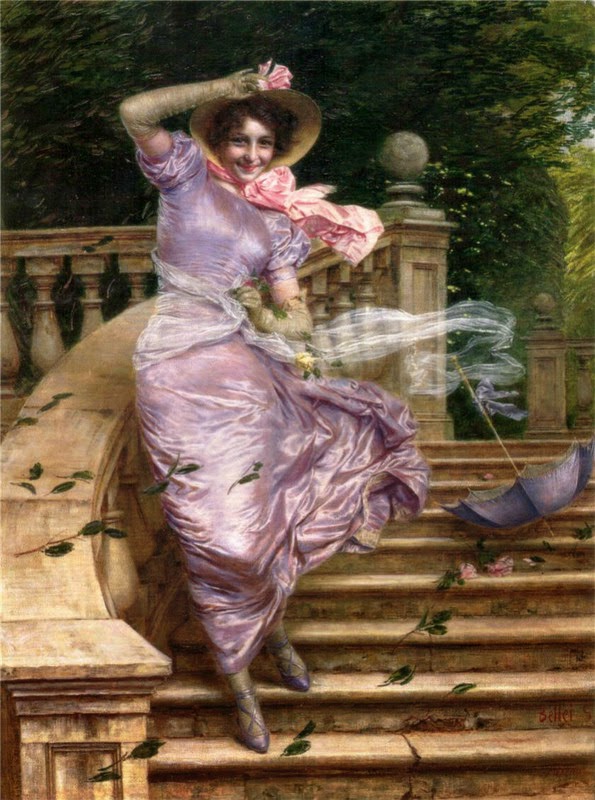 Now for some wind. A conventional windy scene, here. 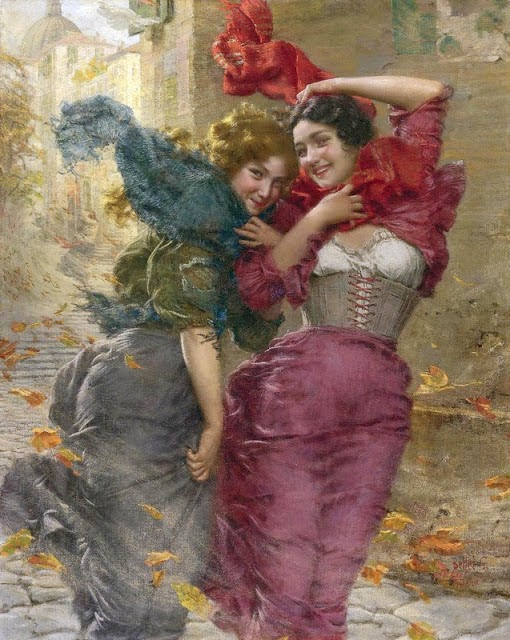 Now a blonde and a brunette, but not necessarily the same ones we just saw at the ball. 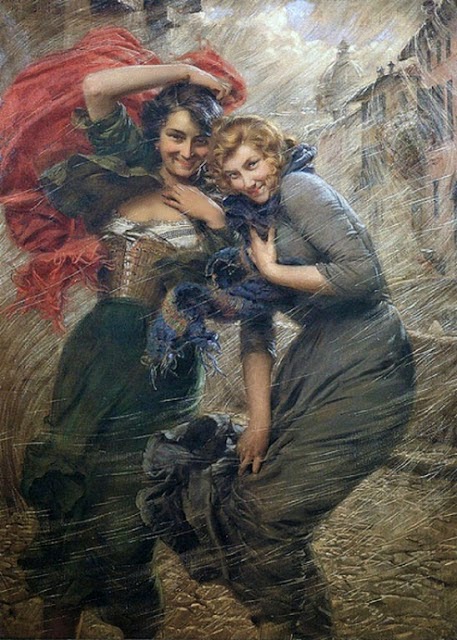 A blonde and a brunette again, but this time it's raining, though they don't seem very wet yet. 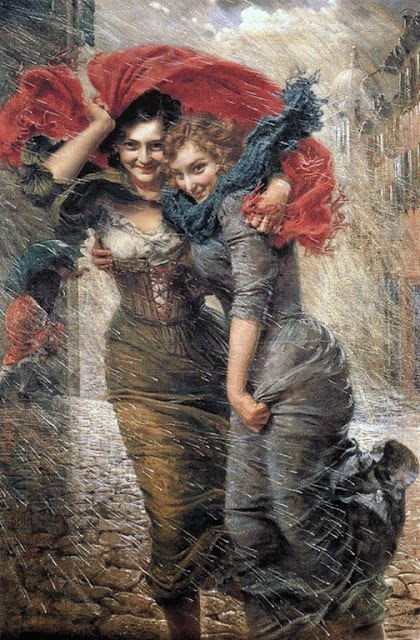 Same thing, though the brunette now has a different skirt. Note that the setting is about the same in all three paintings (the dome in the background is a tip-off). What interests me is that Bellei includes rain with the wind, whereas almost every other painter of pretty women in stormy settings only features wind.

Boreas - John W. Waterhouse - 1902
Here I include some paintings by other artists showing wind and women, starting with this Waterhouse.

A Gust of Wind (Judith Gautier) - John Singer Sargent - 1886-87
A sketch, rather than a finished work by Sargent. The main indication of wind is Mme Gautier holding her hat down.

Gil Elvgren pinup
Golden Age Pinup artists such as the great genre master Gil Elvgren could use wind as a cause for showing off some hose and underwear.

Posted by Donald Pittenger at 9:39 AM