Every so often I leave the realm of painting and illustration to post about architecture, design, transportation, museums and such. Today's post deals with a museum devoted to flight and, to a lesser degree, space travel.

The subject is Seattle's Museum of Flight, usually ranked as one of the better American aviation museums. It has ties to Boeing, but I offhand don't know if any are formal. Its Wikipedia entry dates its founding to 1965, but it wasn't until the mid-1980s that its permanent facilities began to be opened to the public.

Here are some photos I took on a recent visit: 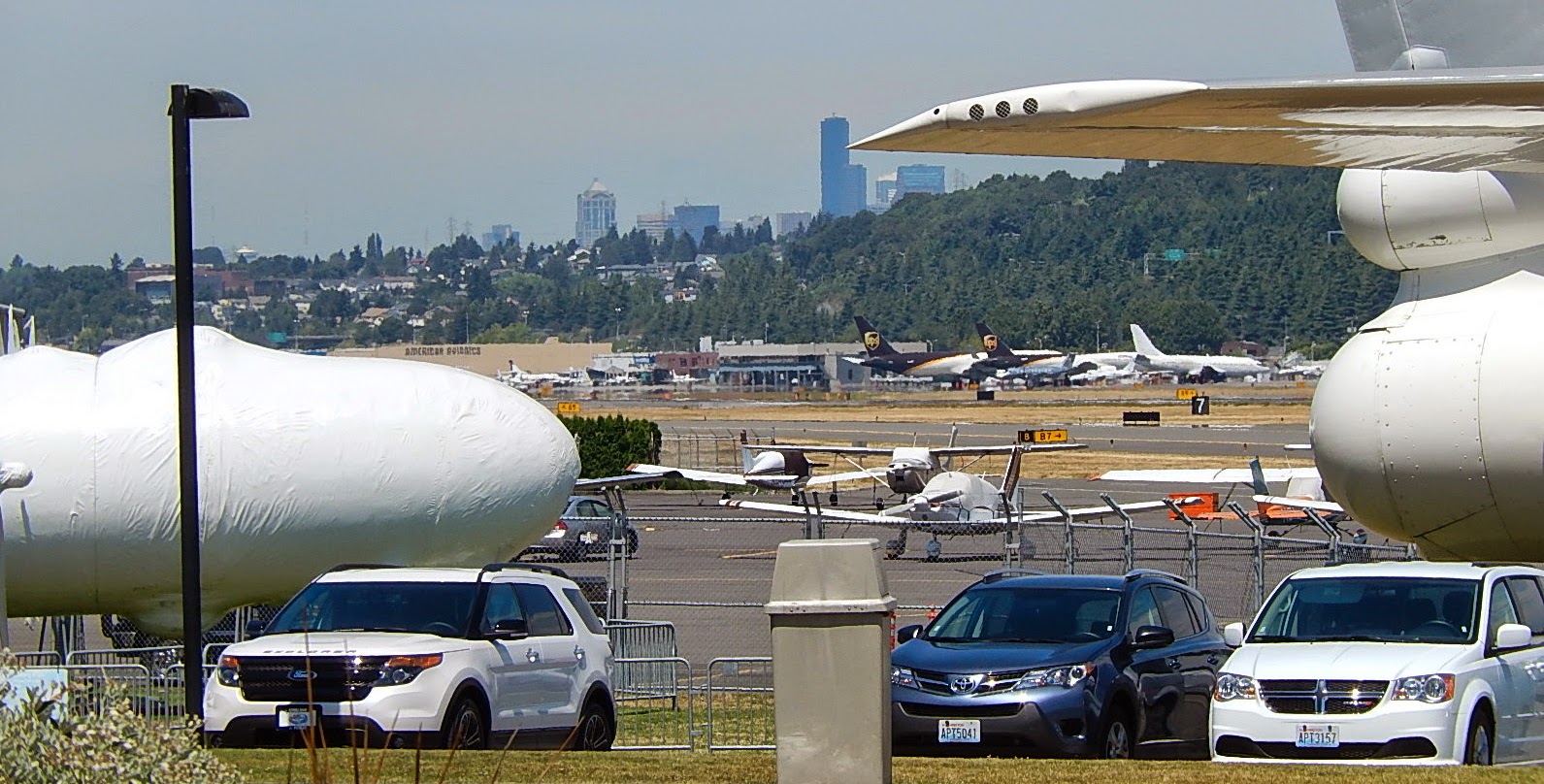 The main buildings are sited next to the Boeing Field runway and near the flight path to Seattle-Tacoma International Airport, so visitors experience a good deal of air traffic. Here is a view taken near the main entrance. To the right is the tail of a B-47 Cold War era bomber. The white-shrouded plane to the left is a World War 2 vintage B-29, still under restoration. In the far distance are downtown Seattle skyscrapers. The intermediate distance reveals a couple of UPS cargo planes at the far side of the runway and a large smattering of other aircraft. 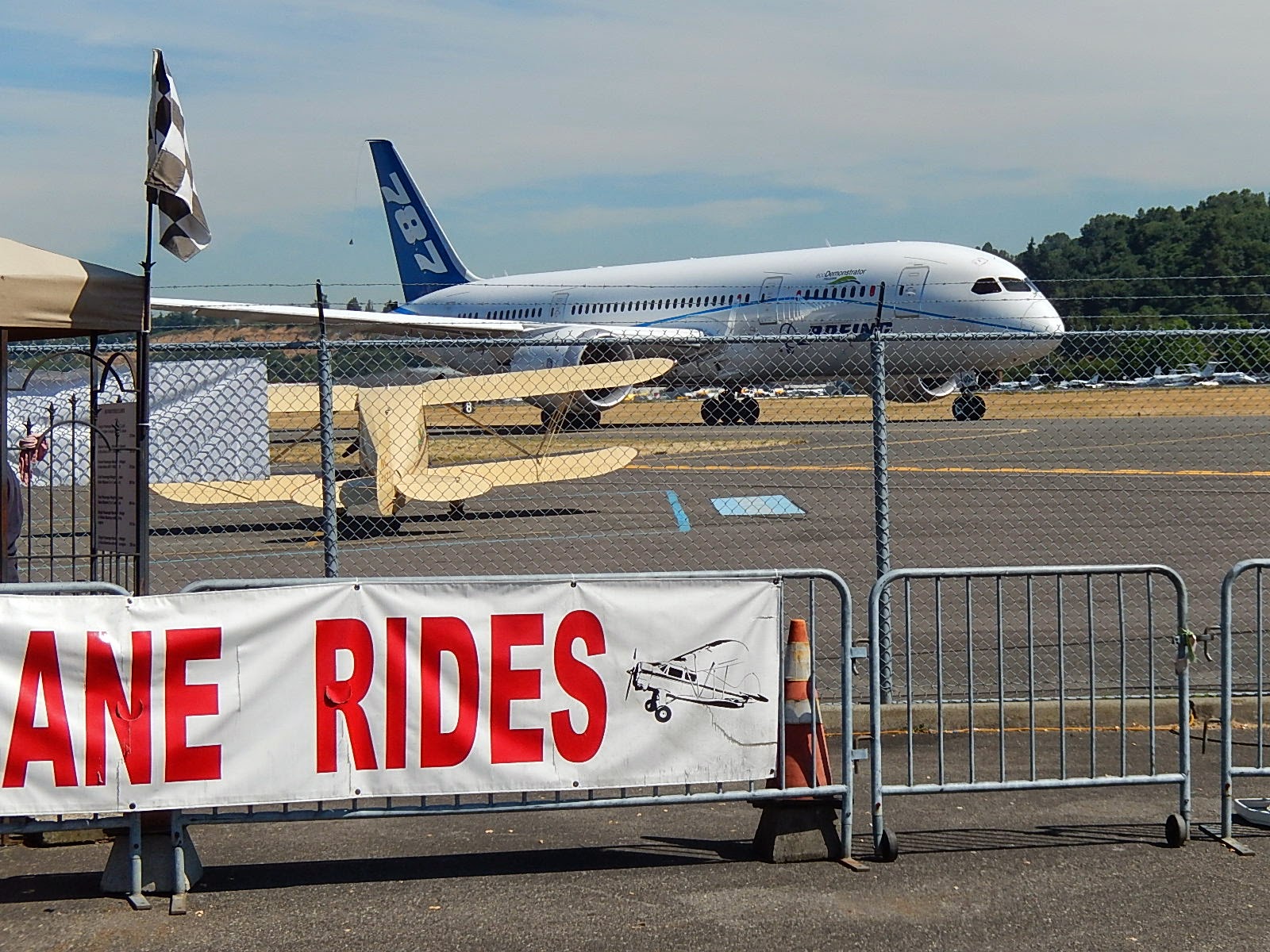 Here is a Boeing 787 Dreamliner demonstration aircraft trundling down the taxiway prior to a take-off, perhaps to the Farnborough air show. A few aircraft are positioned near the museum entrance including this B-17F and the B-47 just mentioned. 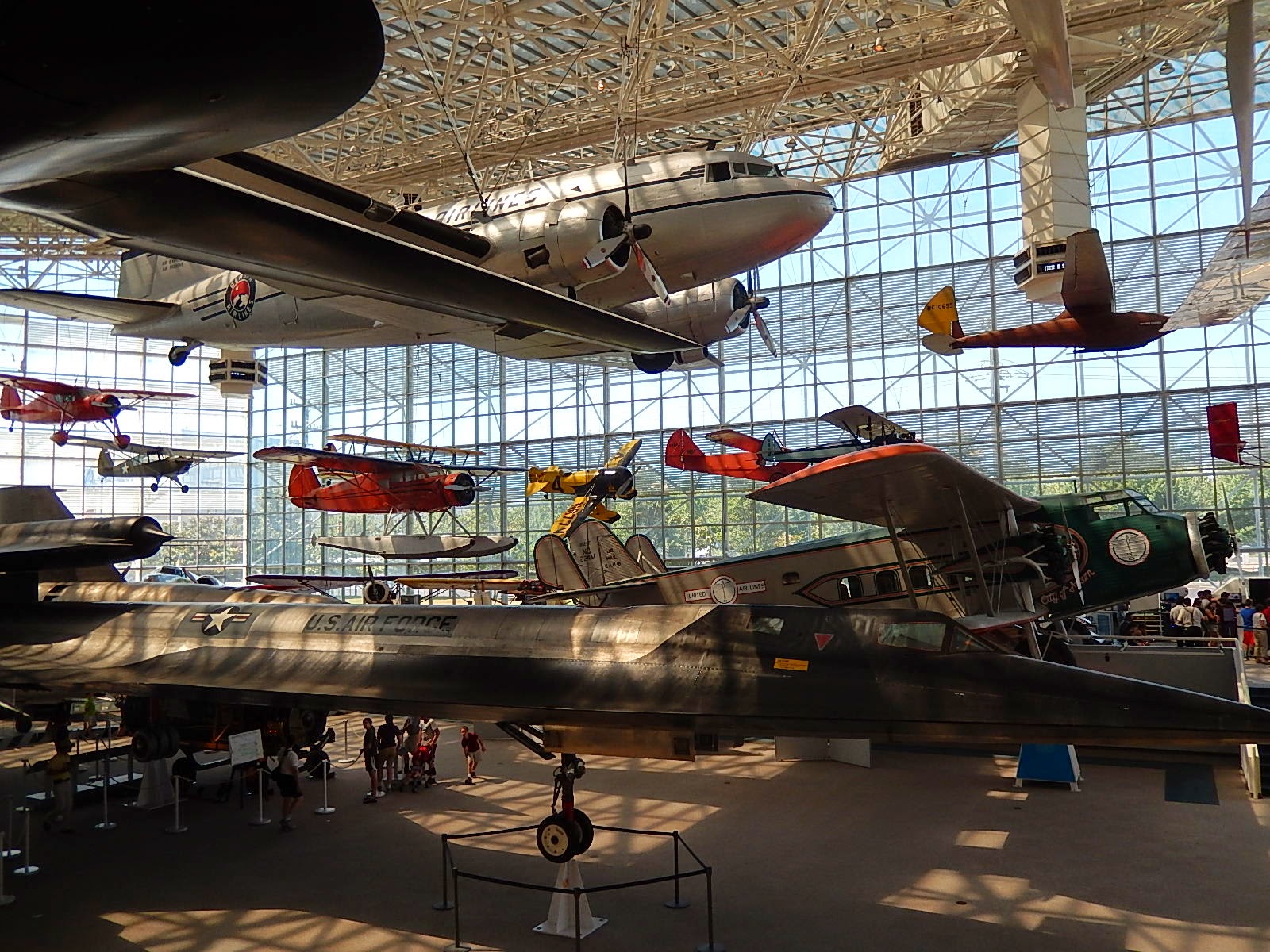 Since the opening of the Smithsonian's aviation museum on the Washington, DC's Mall, large halls with suspended aircraft have become a useful cliché for aircraft museums, including the Museum of Flight. Some of the planes seen are a DC-3 airliner (top), Lockheed Blackbird (bottom), and a replica GeeBee racer (the yellow plane near the center of the photo). 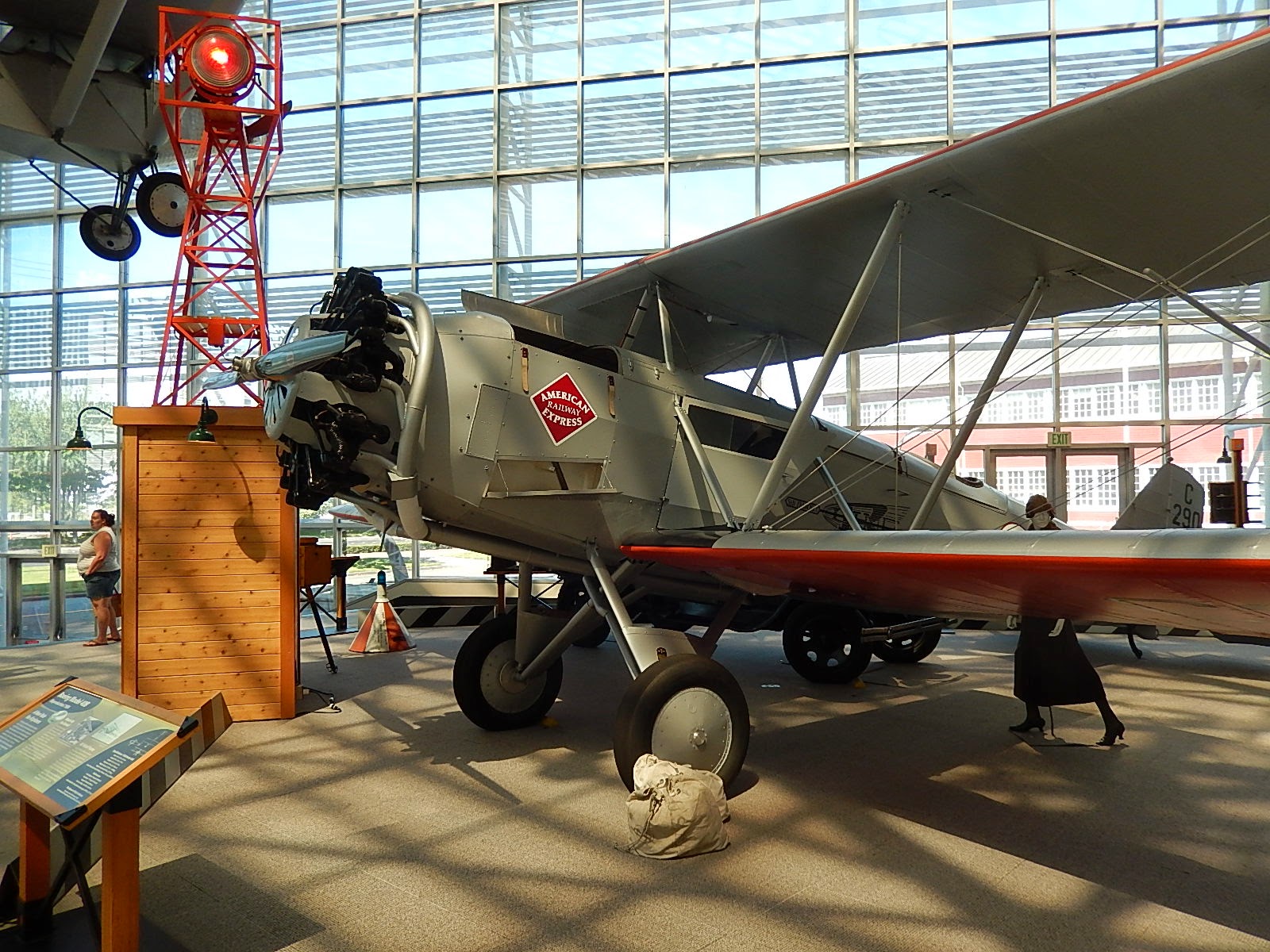 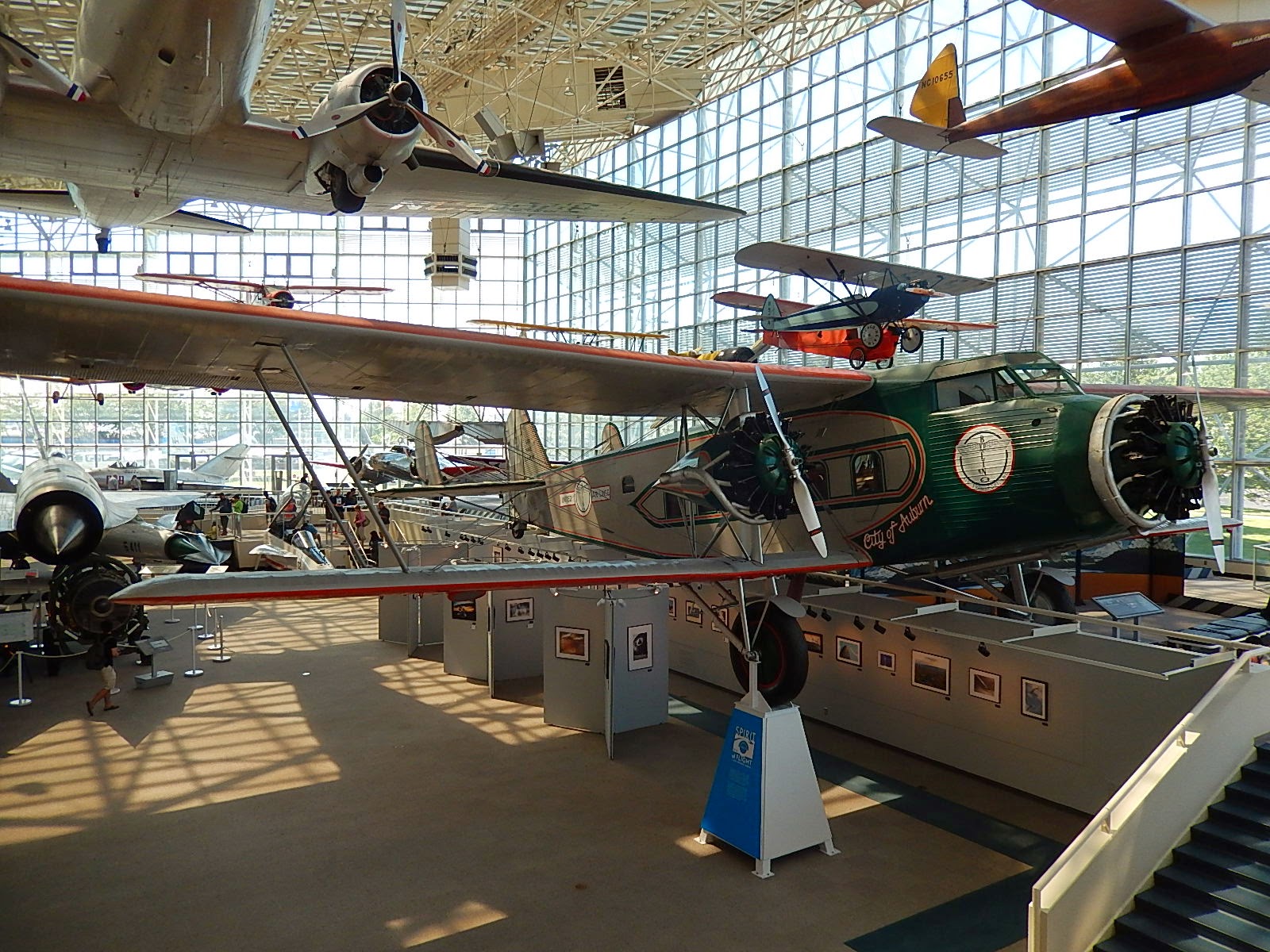 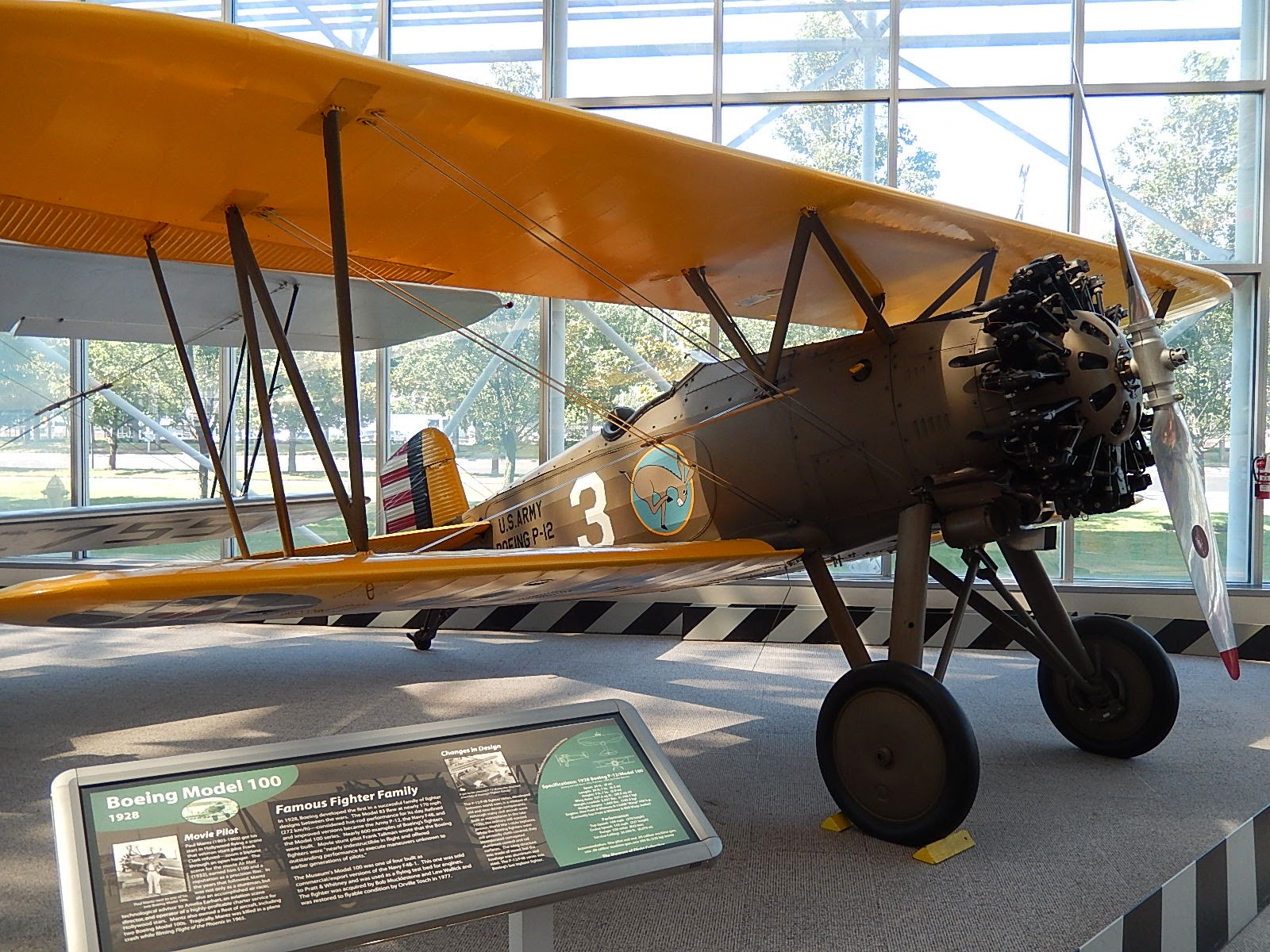 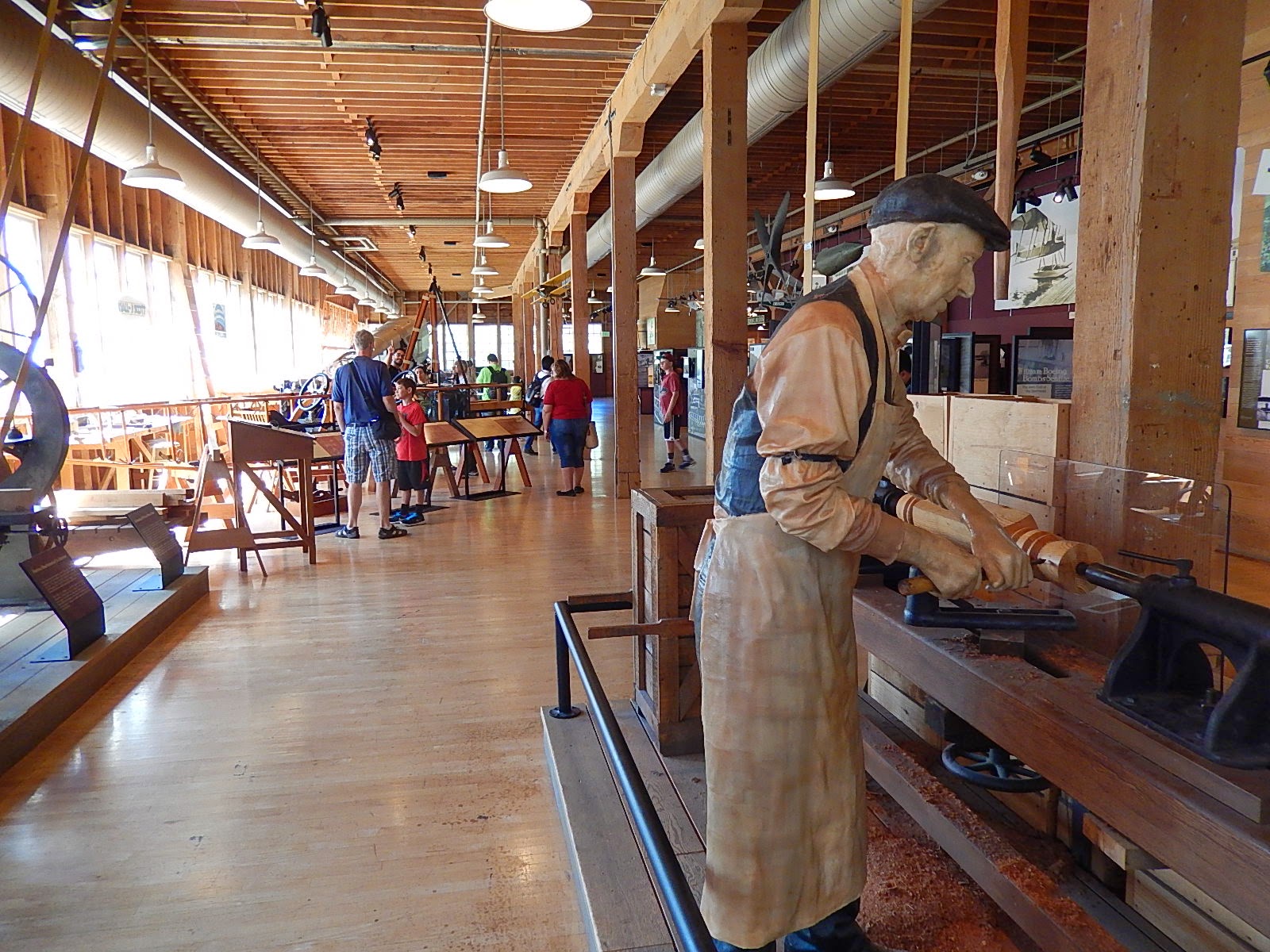 Interior of the "Red Barn," Boeing's factory during the 1920s. 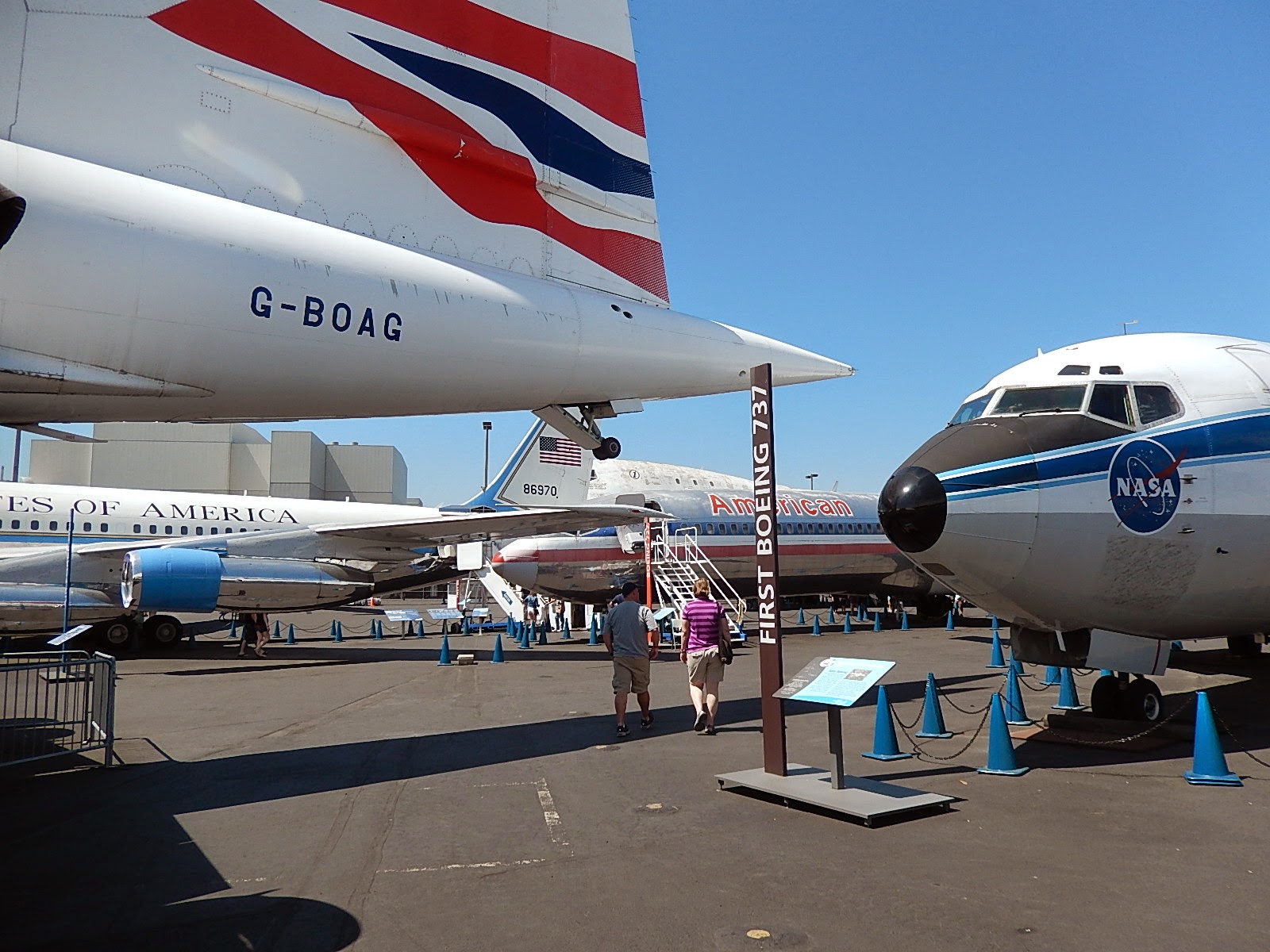 Across a major street from the main part of the museum is the Airpark containing several larger aircraft. Seen here the tail of a Concorde supersonic airliner, the first VC-137B Air Force One (Presidential aircraft), a Boeing 727 airliner, and at the right, the first Boeing 737 airliner. 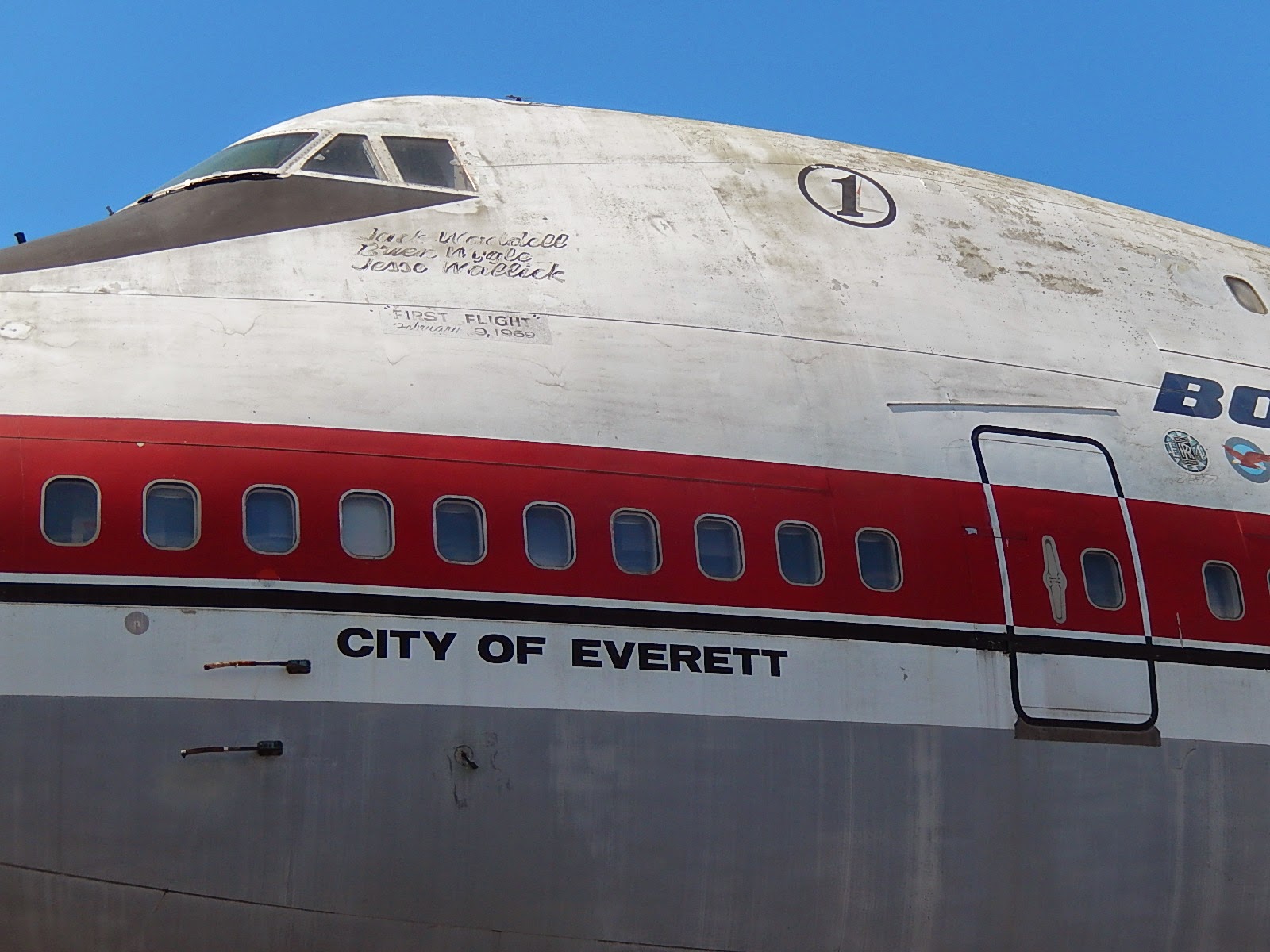 Badly in need of a paint job is the first Boeing 747 airliner. Below the cockpit windows are blurred names of the flight crew for its maiden flight, 9 February 1969 -- more then 45 years ago. 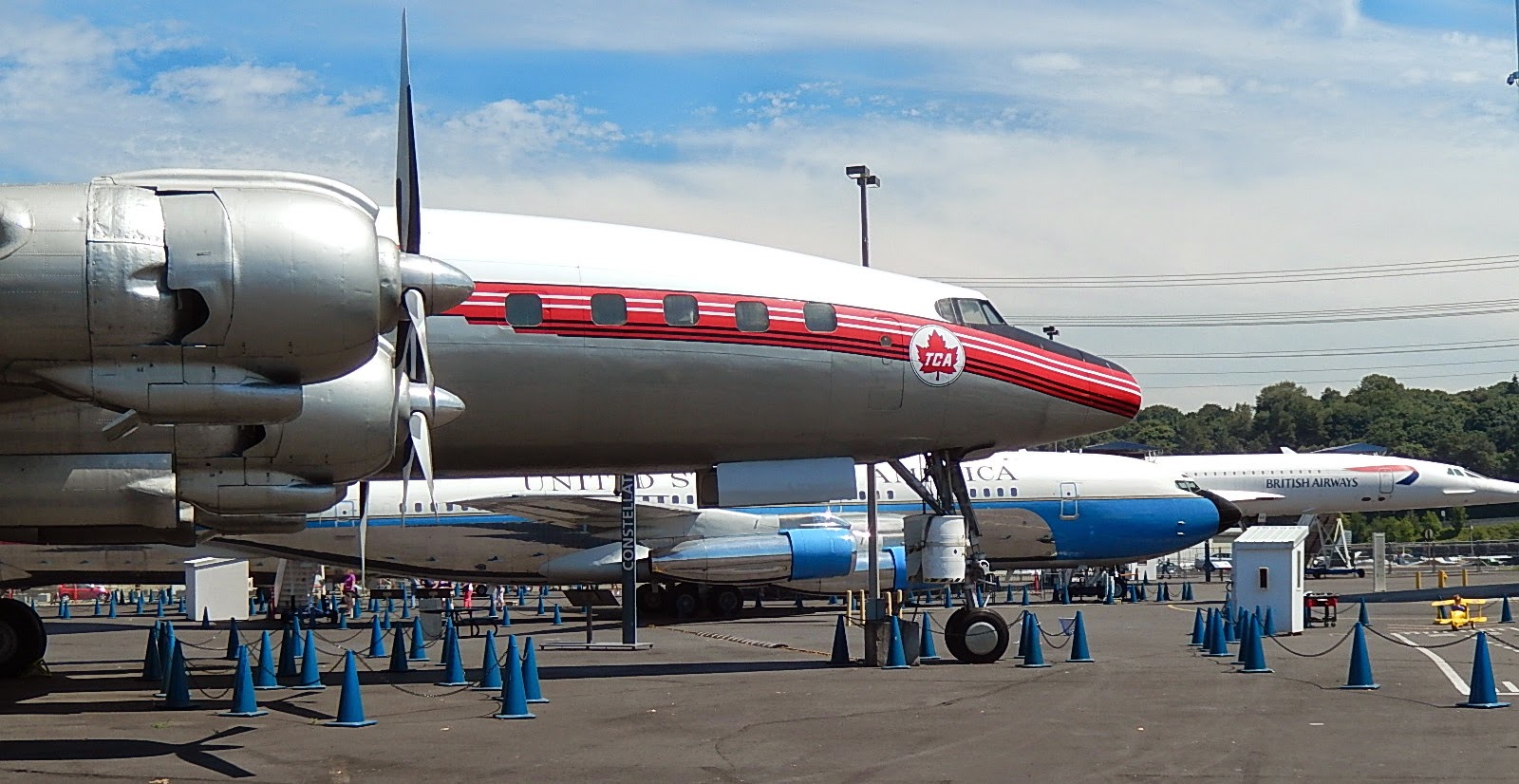 Here are a Lockheed L-1049G Super Constellation, the Air Force One, and the Concorde. 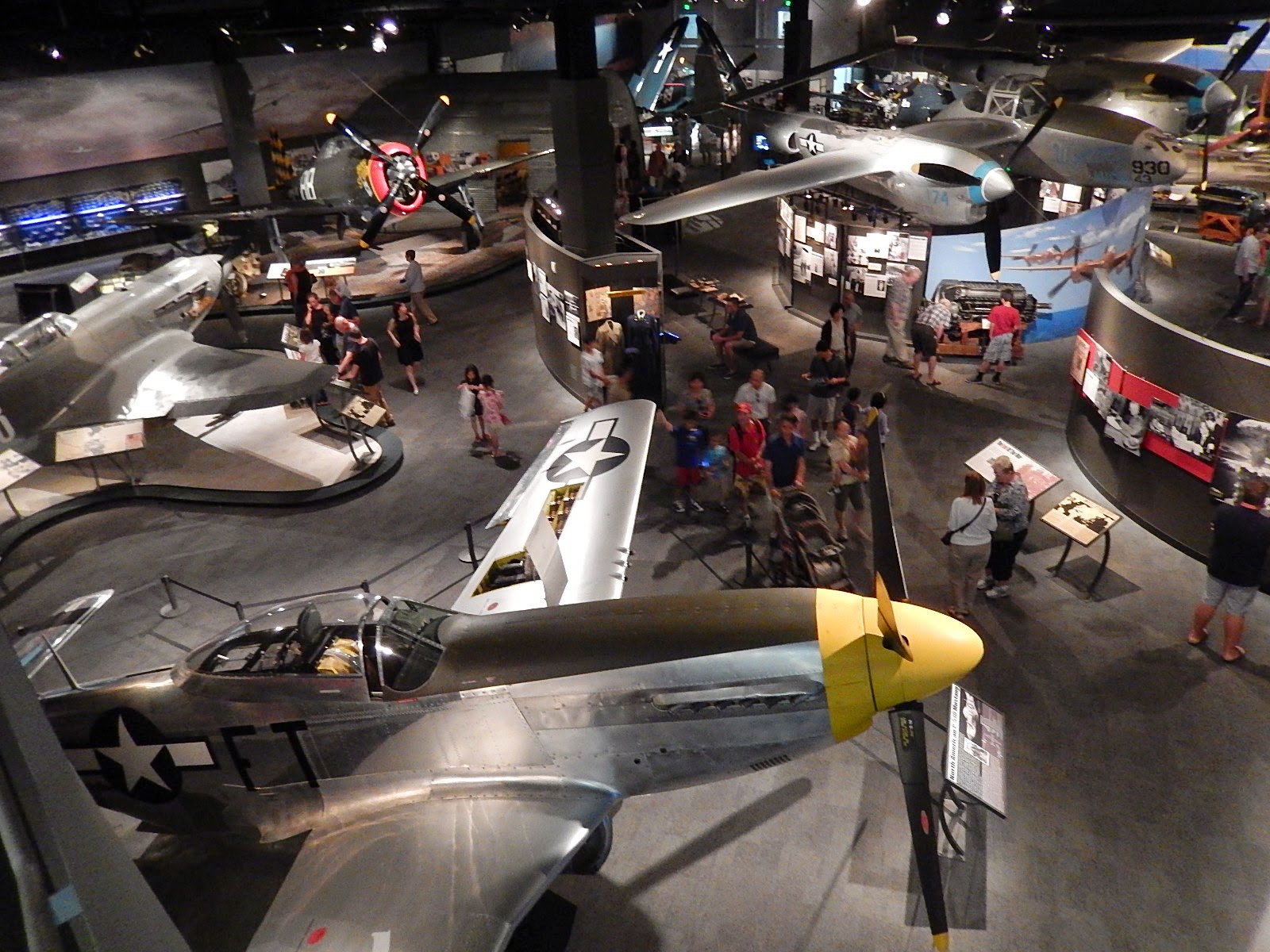 Inside the Personal Courage Wing that houses World War military aircraft, many of which are from the now-defund Champlin collection. I think the name is silly and perhaps politically correct: Why not simply call it something like World War Warplanes Wing, which would be truthful. But this is Seattle, after all (sigh). The lower floor deals with World War 2 and has lots of interesting stuff, jammed so closely together that it's difficult to photograph the planes. Seen here (clockwise from the bottom) are a P-51D Mustang, a Soviet Yak 9-U, a P-47D Thunderbolt and a P-38L Lightning. Mostly hidden behind the P-38 is a Goodyear FG-1D version of the Vought F4U Corsair. This aircraft was fished out of Seattle's Lake Washington years after it crashed during the war. 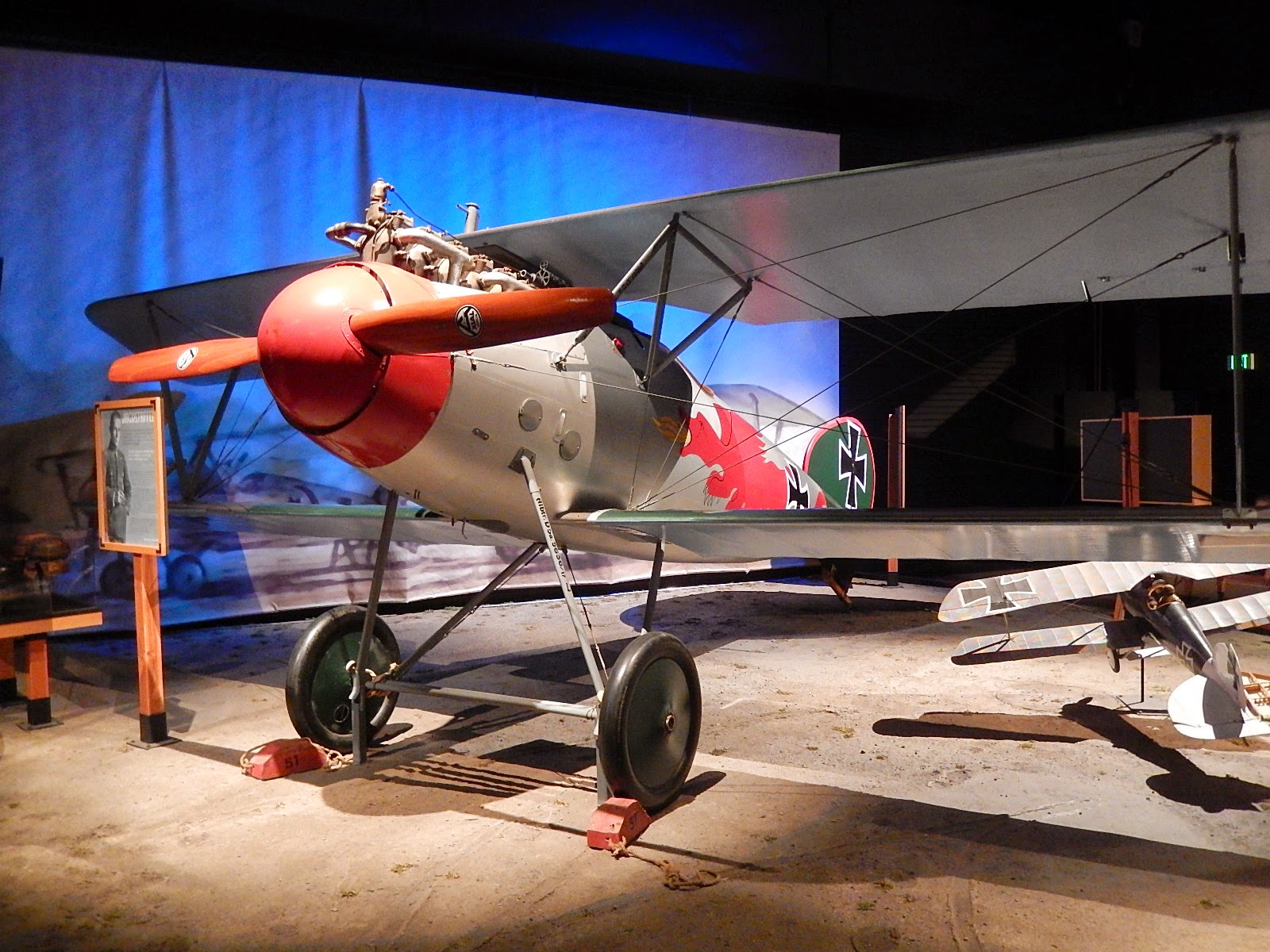 A replica Albatros D.Va from the Great War housed on the second floor of the wing.