For one thing, most of his professional life was spent in San Francisco, far from the New York City media center (though he was there 1939-1945). Moreover, part of that career was as an art director for major advertising agencies. Less unusually, he seems to have been largely self-taught.

There isn't much information regarding him on the Internet, but two sources worth visiting are here and here.

Setting all that aside, Ludekens was skilled at his trade. He did some cover and other work for the Saturday Evening Post, America's leading general-interest magazine at the time. And one of his advertising art clients was General Motors' Chevrolet Division, whose cars were the best-sellers. So from a commercial standpoint, Ludekens was in the front rank.

He also illustrated for True, the leading men's adventure magazine in the 1940s and 1950s.

Below are examples of Ludekens' work. 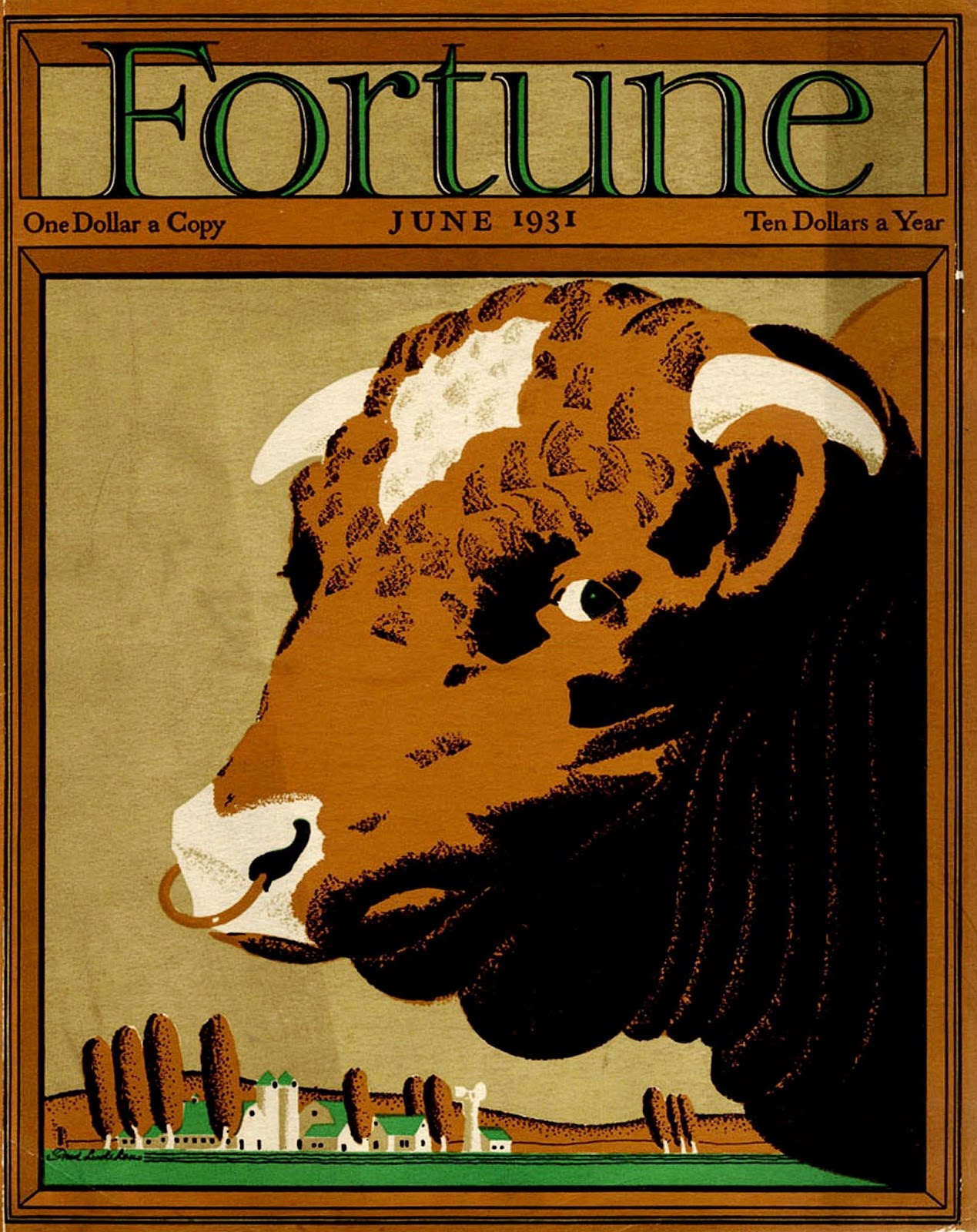 Created about the time he became art director for the San Francisco branch of the Lord & Taylor agency.  Fortune was a leading business-oriented magazine, so Ludekens was already on the cusp of major-league illustration. 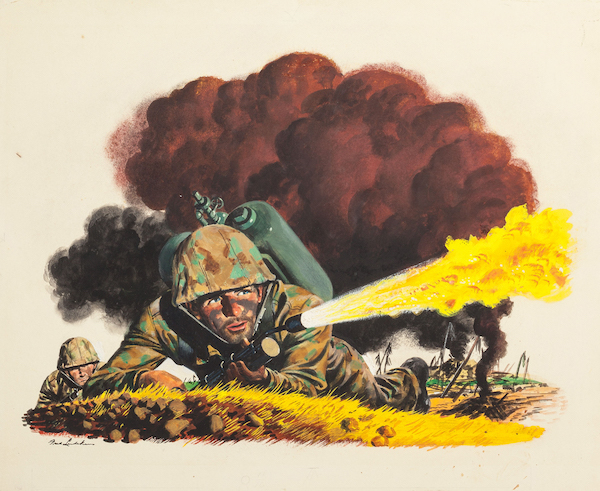 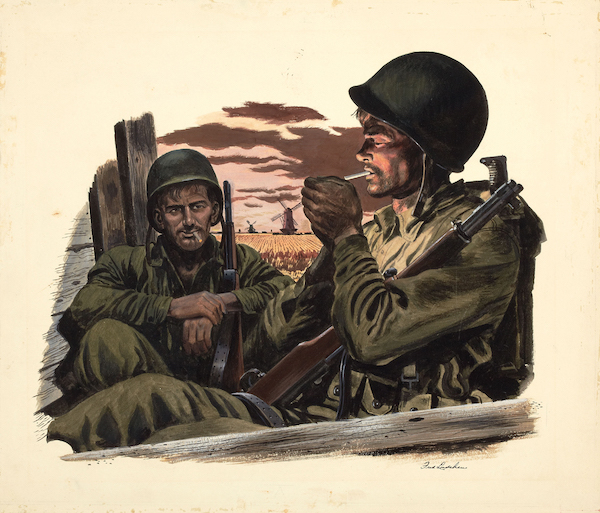 Two illustrations for Nash-Kelvinator advertisements towards the end of World War 2. The first shows a Marine with a flame-thrower used for attacking Japanese bunkers. The second shows soldiers in Holland taking a break. The Netherlands was largely in the British part of the push towards Germany in 1944, and most American activity there was in the hilly central and eastern part of the country. Ludekens' illustration depicts a flat background with windmills, and a little Web research reveals that the 104th Infantry Division campaigned in the Scheldt River Estuary briefly in the fall of '44. I do not know if Ludekens knew of this comparatively minor detail or simply painted a generic Dutch background for showing American troops in a war zone. 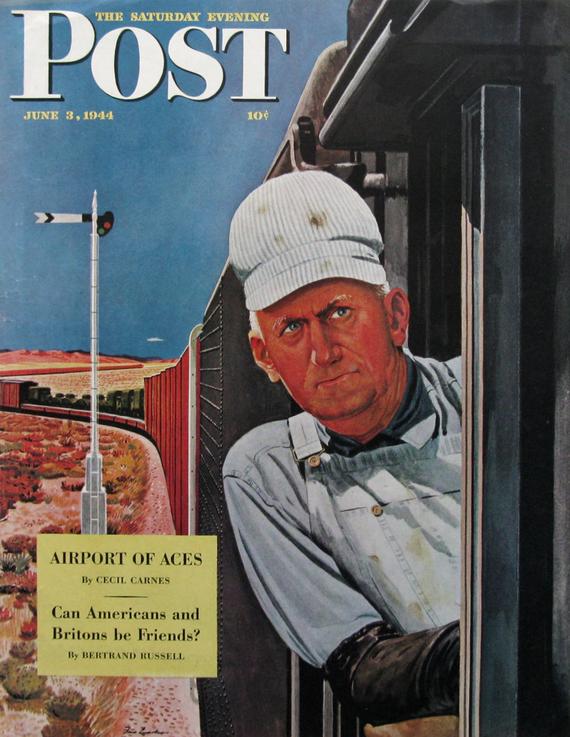 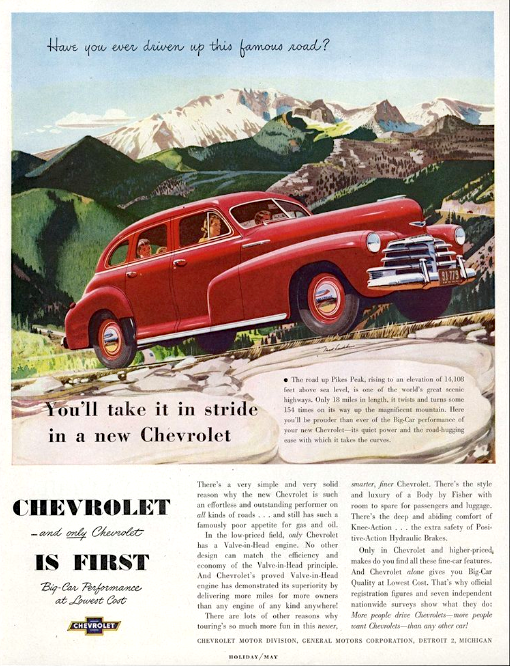 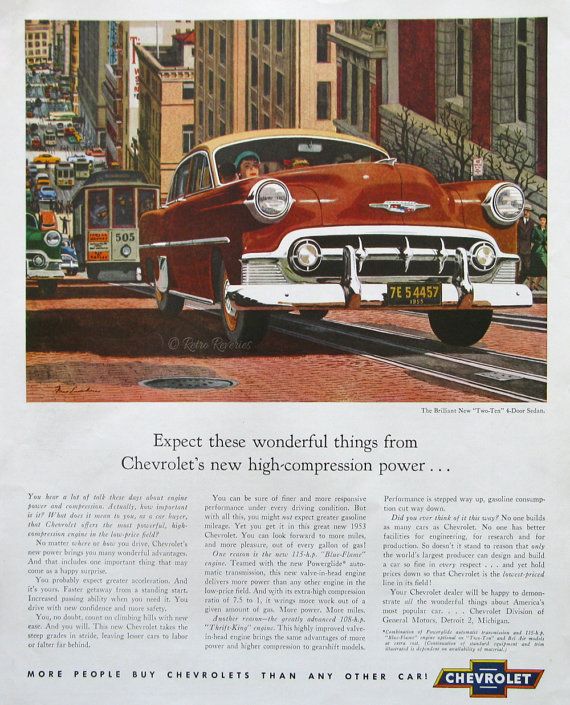 Two Chevrolet advertisements, the first for the 1948 model year, the second for 1953 Chevrolets. The latter's setting is San Francisco's California Street heading up Nob Hill, so Ludekens didn't have to travel far to research this. The '48 Chevy is not quite depicted accurately (they looked a bit higher and stubbier in reality) while the 1953 model is considerably distorted. But that was normal for automobile publicity illustration in those days. 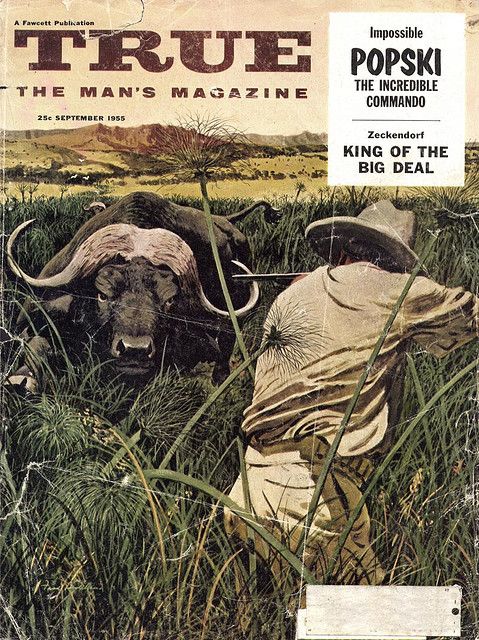 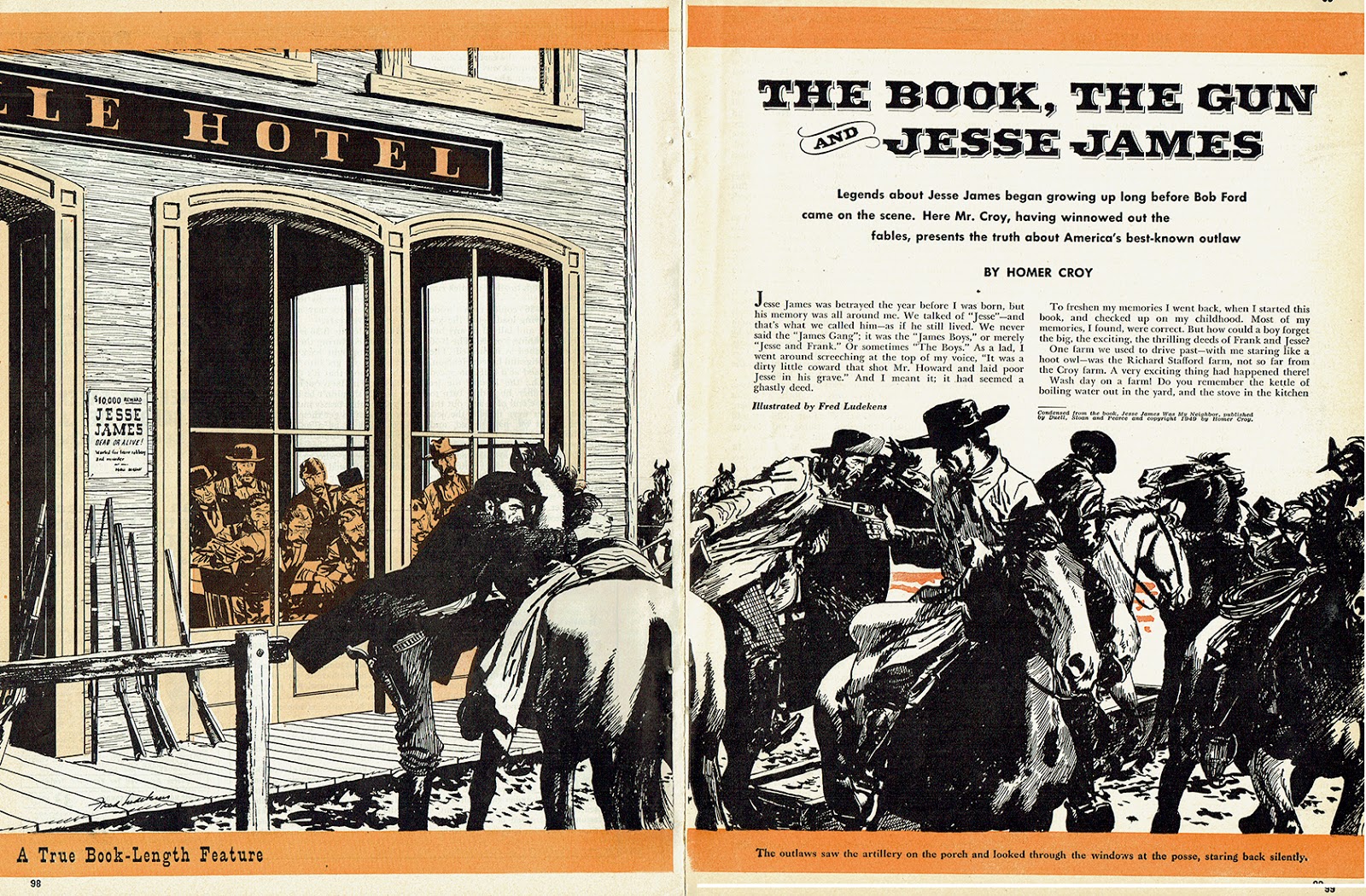 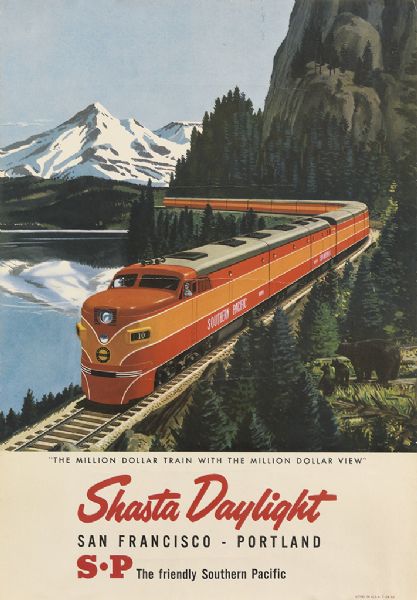 Southern Pacific Railroad poster, probably from the early 1950s.  Since it's advertising, the train has more coaches that it likely actually had. Also, I'm not sure if the Oregon background is actual --  so let's consider the publicity photo below: 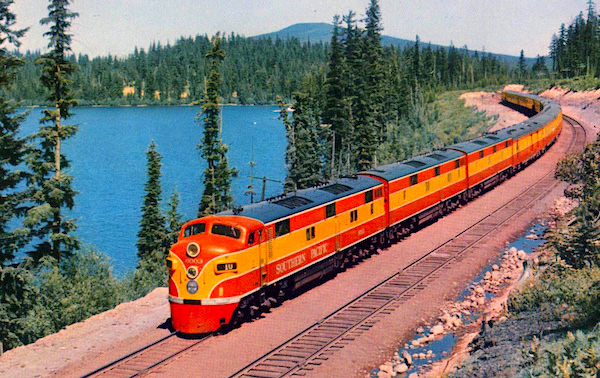 Ludekens probably used this photo as reference for the illustration and dramatized the scene to please his client -- or perhaps SP's agency's art director ordered the enhancements. 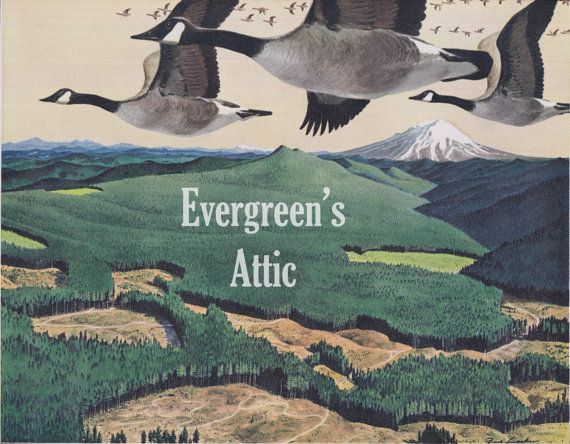 Another important Ludekens client was the large, Tacoma-based timber company Weyerhaeuser (pronounced Ware-howser in American dialect). He painted a series of illustrations for a long-running ad campaign. The scene might be generic Washington State or could be from a reference photo ... hard to say which. The mountain in the background resembles pre-eruption Mt. St. Helens.
Posted by Donald Pittenger at 1:00 AM

emjayay -- Thanks, fixed. I should have known that. Can I blame the spell-checker?

Thanks for the information on Fred Ludekens.
In 1964 - at the age of eight - I received my first wall calendar; a Weyerhaeuser calendar advertising the (now defunct) Brookfield Lumber Company in Connecticut. Each moth sported a beautiful wildlife illustration by Ludekens, and being a nature lover I absolutely adored that calendar! !964 was a Leap Year, and as December drew to a close I began wondering how often leap years repeated... when I could accurately use this calendar again. Working patiently with pencil and paper I eventually deduced that leap years repeat ever 28 years, and that the dates on my '64 calendar would be good again in 1992. True to my plans, I displayed that calendar in '92. Another 28 years have now passed, and this morning I hung it upon my kitchen wall as my vintage calendar for 2020. 56 years later Fred Ludekens' images still thrill the eight-year-old boy inside me!