I find the houses architects design for themselves interesting. Presumably, the constraint of catering to the desires of a client are swept away so that the architect can express his own design philosophy and personality.

Other constraints remain, of course. The nature of the site, the cost of building the house and the needs of the architect's family can be factors. Then there is the possibility that the architect wishes the house to be a professional advertisement, to be featured in local newspapers or even architectural magazines.

The present post features personal houses designed by a group of architects called the Harvard Five. They were associated with Harvard University in one way or another and settled in New Canaan, Connecticut where their houses were built. They were born between 1902 and 1919 and the houses were built from 1949 to 1958, so we are dealing with a group having a fairly homogeneous background. The houses reflect avant-garde domestic design in the United States from 1945 to around 1955 when the designs were conceived.

Modernist and postmodern architects have done a good deal of damage, in my judgment. But the worst of it is in the form of large buildings and not so much houses, where modest size means less visual impact. The Harvard Five houses are situated on large lots, fairly isolated from neighbors.

Shared design characteristics include large expanses of window glass, a byproduct of 20th century heating technology that eliminated the need to build tall houses with small windows and compact rooms each with a fireplace. They have flat roofs (or nearly so), an architectural fad contradicting the "form follows function" concept (flat roofs shed water and snow less well than gabled roofs). None feature explicit ornamentation. All but one are single-story. 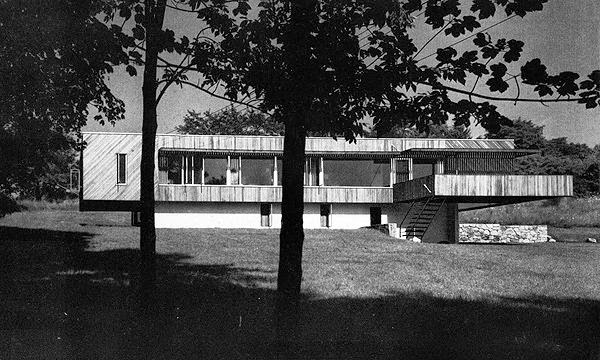 Marcel Breuer House - 1949
Marcel Breuer (1902-1981) had Bauhaus associations that continued through the 1930s in the person of Walter Gropius. There seems to be a whiff or decorative intent in the angled paneling on some of the walls. 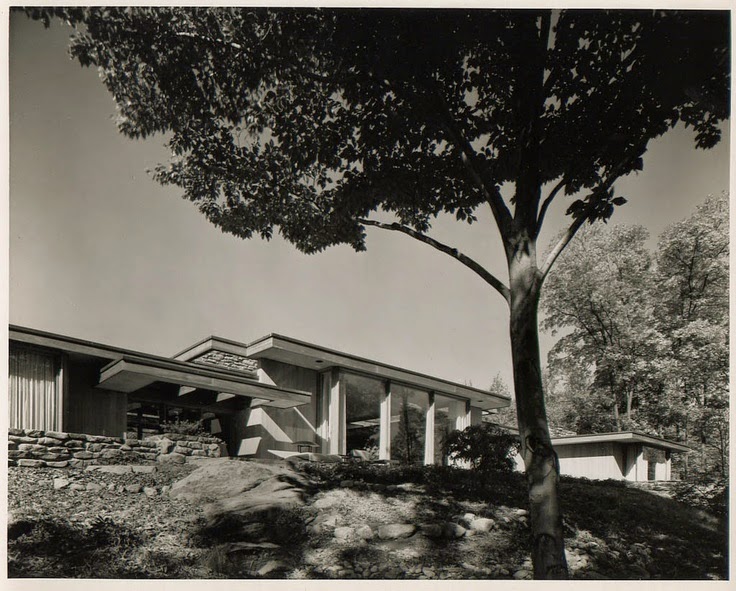 Landis Gores House - 1948
Landis Gores (1919-1991) was stricken with polio, yet managed to continue his career. The use of stonework on some of the walls is a nod to the New England environment and also helps to offset the stark, geometrical aspects of the design. 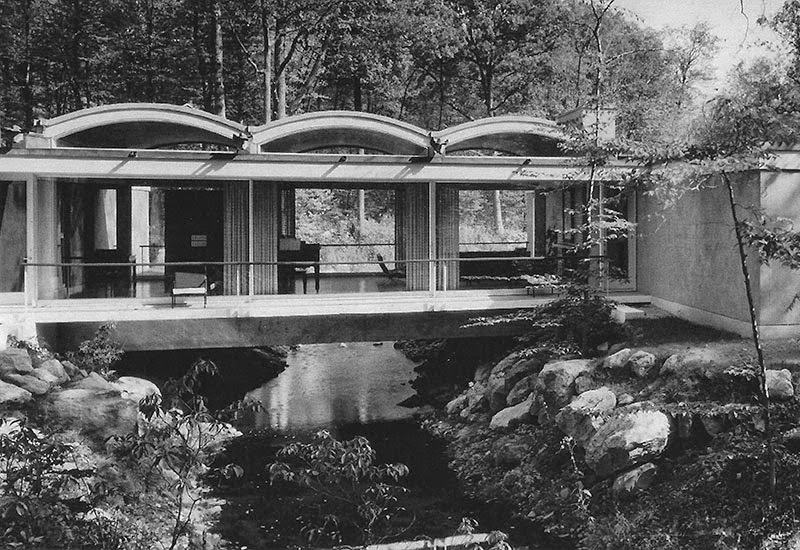 John M. Johansen House - 1958
John M. Johansen (1916-2012) used a formal (symmetrical) floor plan where four sub-structures were attached to this creek-spanning central unit near its corners. Roofs are flat aside from the part featured in the photo. 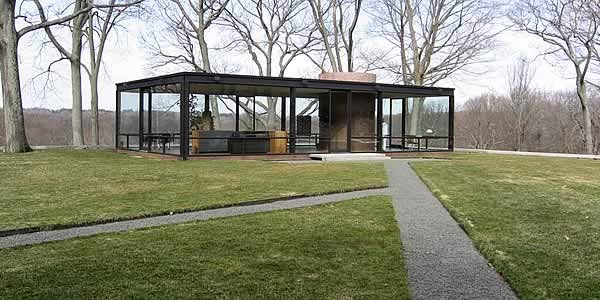 Philip Johnson House - 1953
This house by Philip Johnson (1906-2005) is by far the most famous and controversial.  Controversial due to its apparent lack of privacy. I consider it a case of an architectural theory pushed beyond the realm of common sense.

Eliot Noyes House - 1955
Eliot Noyes (1910-1977) is perhaps better known for his industrial design and corporate image work than for his architecture.  Like Gores, he used local stone in his house's construction. But he did this in a more rigid way, essentially blanking out two walls of the building in stark contrast to the glazing of the side facing the camera in this photo. Like Johnson's house, this strikes me as being an instance of being too clever, resulting in degraded livability.

Posted by Donald Pittenger at 10:25 AM