Some Soviet Social Realism paintings were very large, and a number of these were group portraits with large casts. Often the groups portrayed were Party leaders or members of prominent Russian organizations. Others were of common folks.

When I was in Málaga, Spain in November I visited a branch of Saint Petersburg's excellent Russian Museum. It was holding a year-long (ending February 2019) exhibit titled "The Radiant Future: Socialist Realism in Art." A fine exhibit. Plenty of examples, some of which I even knew about before I visited. Of course I took lots of snapshots. Examples of some of those group portraits are shown below. Click on images to enlarge. 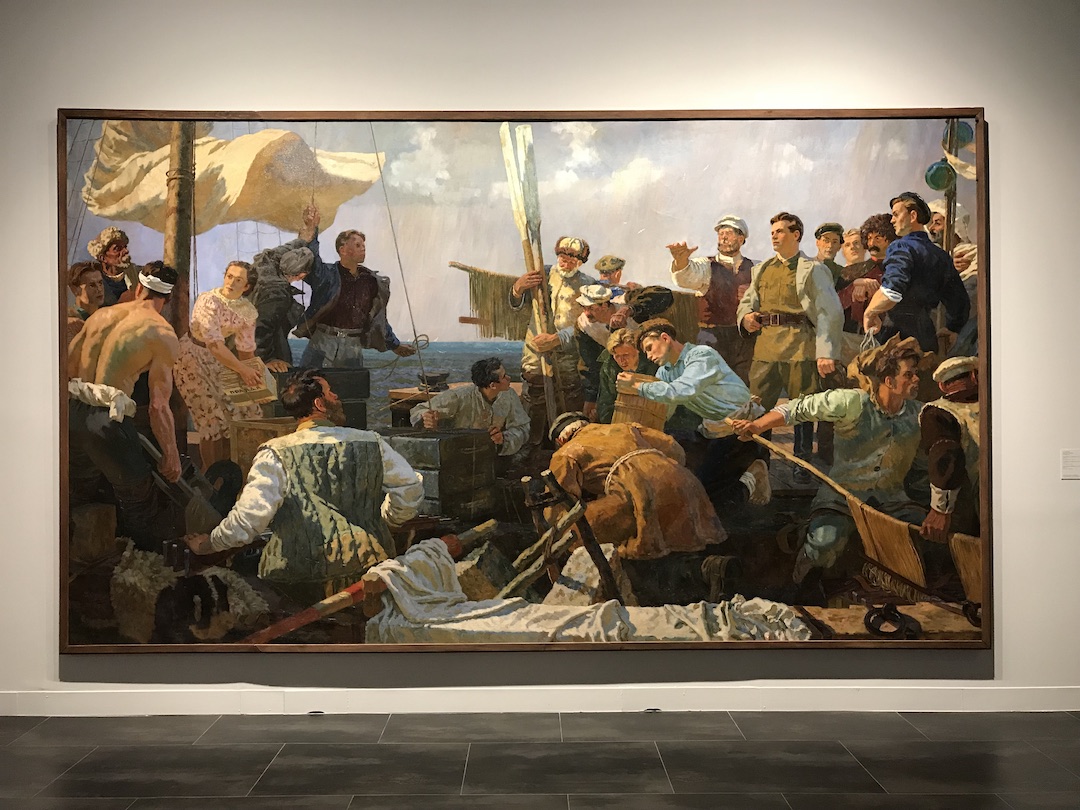 Odintsov, V.G. - Sergei Kirov in Astrakhan in 1919 - 1940-49
This painting's composition seems peculiar. Which man is Kirov? (A prominent Bolshevik later assassinated in 1934, possibly on orders from Stalin and then treated as a hero for political purposes.)  Is Kirov the man in dark clothes toward the upper left who appears to be gesturing, but actually is holding onto a line?  Or is he the man towards the upper right in a light jacket and khaki uniform?  I guess the latter because he is better lighted and at least a few people in the lower center of the picture are looking at him.  But why are most other folks not paying him attention? Also note that the composition is in the form of an X, but where the lines cross there is only the side of a man's head. 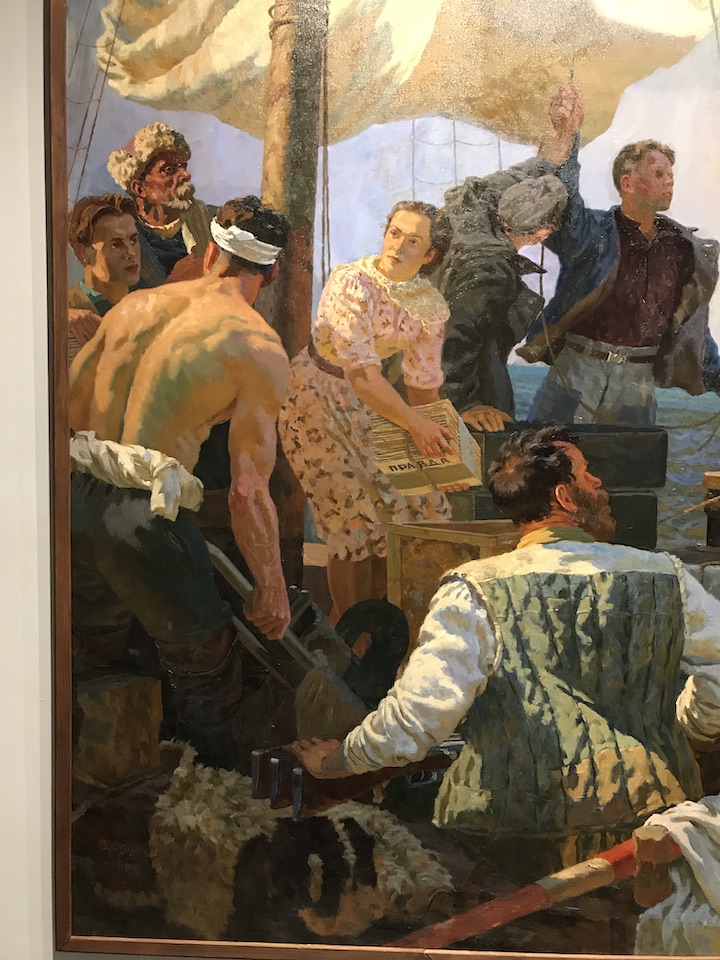 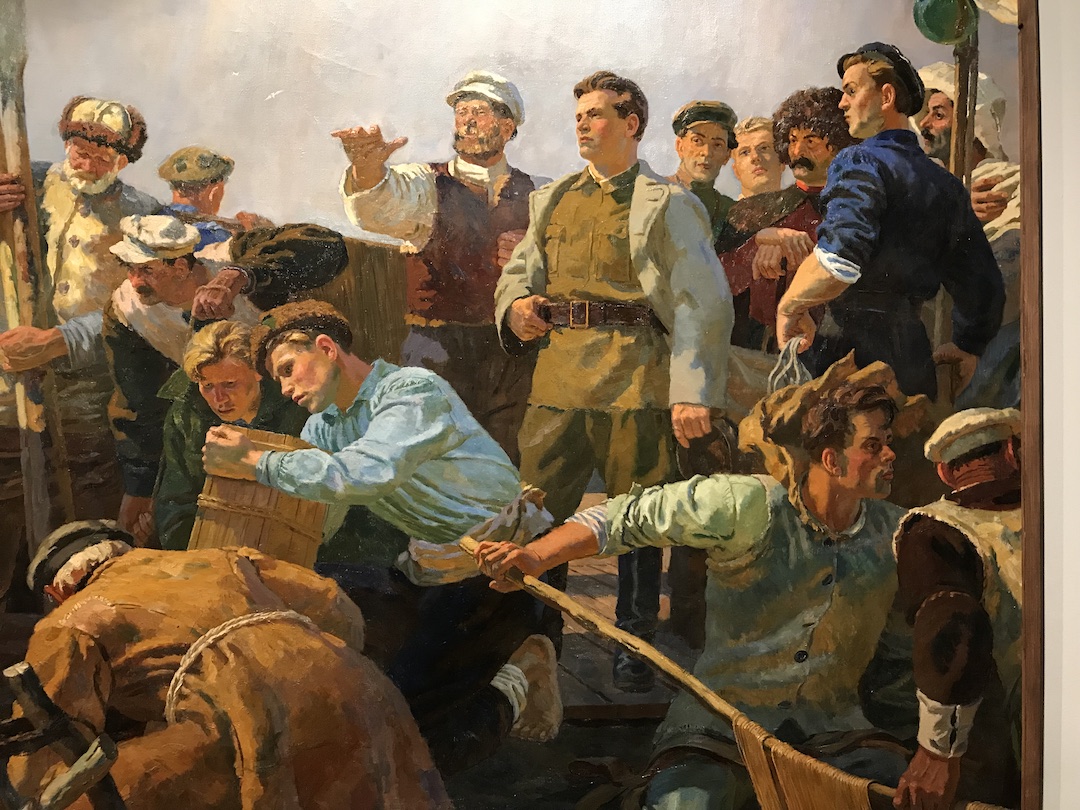 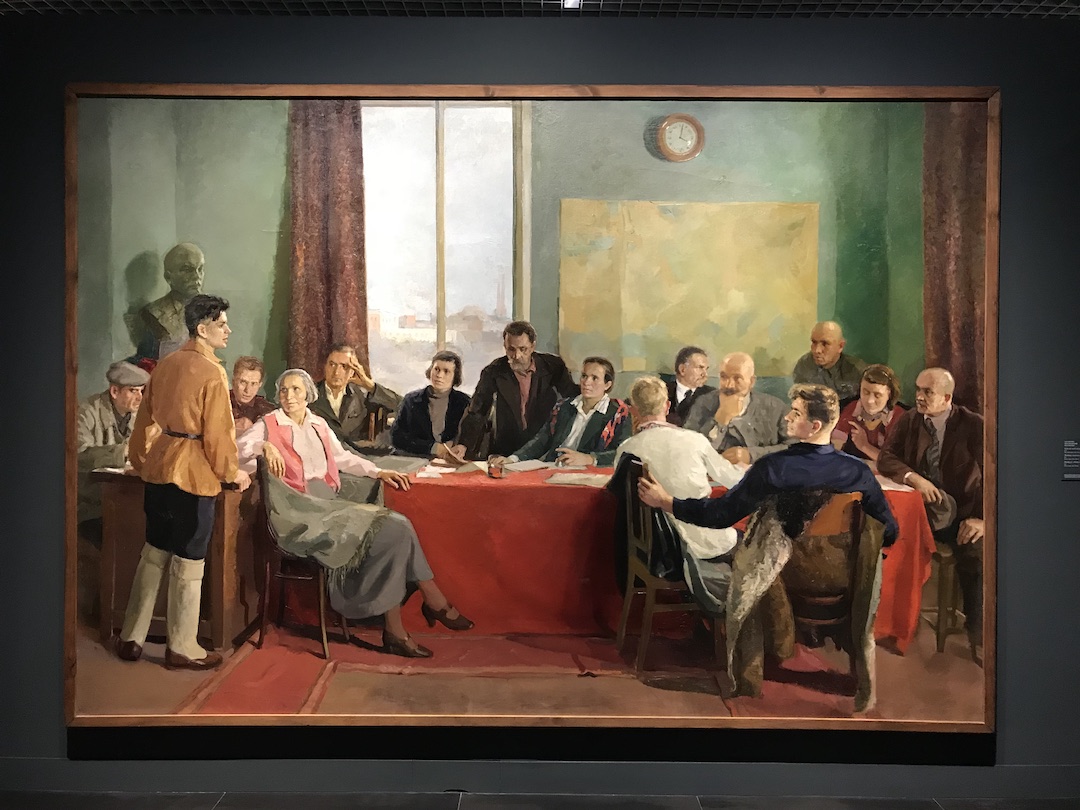 Lukomsky, Ilya - Meeting of a Factory Party Committee - 1937
Some background regarding the painting is in this book. On page 108 Matthew Cullerne Brown writes:
"[T]the subject of which is a komsomol [Party youth organization] member's acceptance into the party, depicts the actual membership of the Stalinogorsk communist party at the time. The applicant stands at the left, answering with anxious resolve questions put to him by the committee. The painting lacks drama, but the social importance of its theme -- this moment was advertised as being the most significant in a person's life -- caused it to be widely discussed in the art press of the time."

This painting has a whiff of the primitive to it, but I don't know if this was a purposeful affect or the artist's actual style. 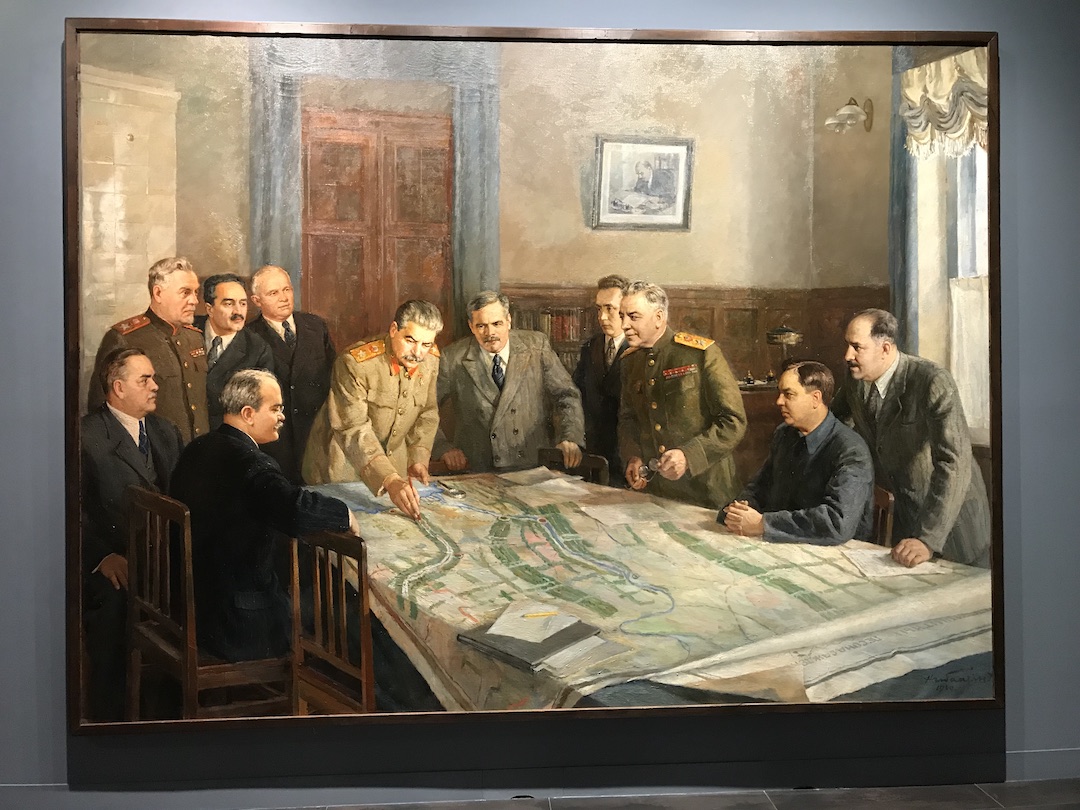 Nalbandian, Dmitri - For the Happiness of the People (Session of the Politburo of the Central Committee of the All-Union Communist Party) - 1949
The room shown here is not at all fancy. Was Stalin's Kremlin actually like this, or did the artist make the place appropriately proletarian? 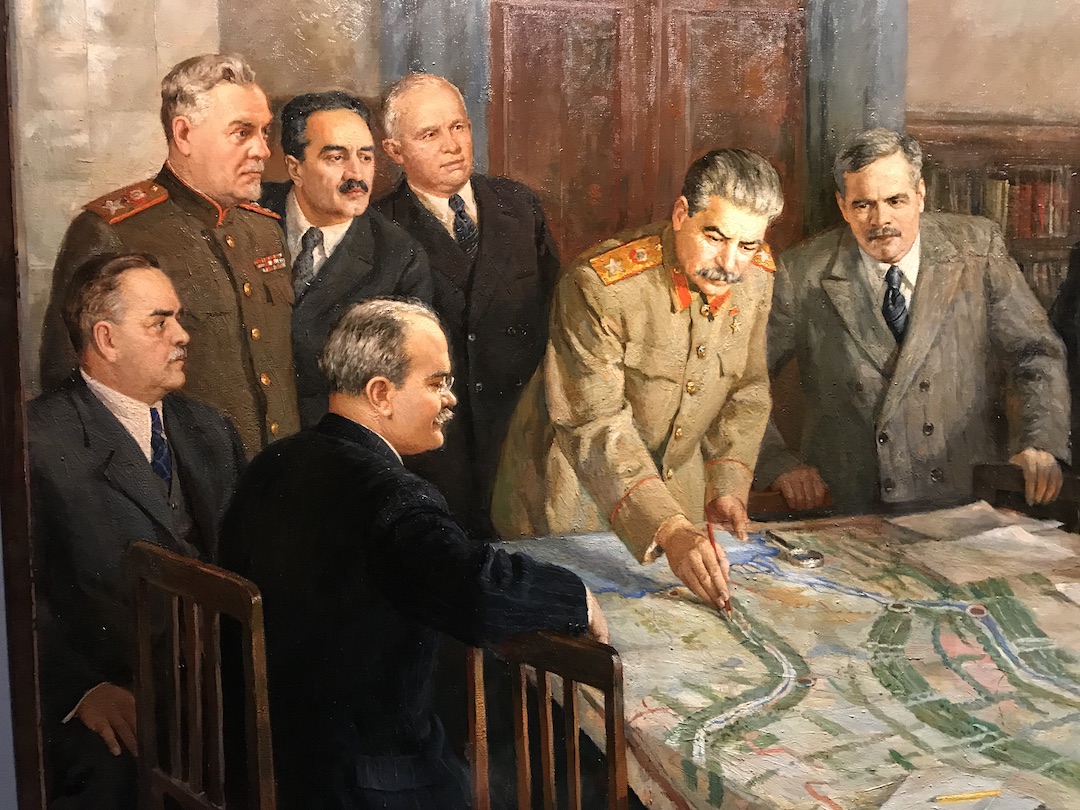 Detail of the pervious image. Among those easily identifiable are Anastas Mikoyan (standing, with mustache), Nikita Kruschchev (to the right of Mikoyan), Vyacheslav Molotov (seated, wearing glasses), and Josef Stalin (in uniform, drawing on the map). 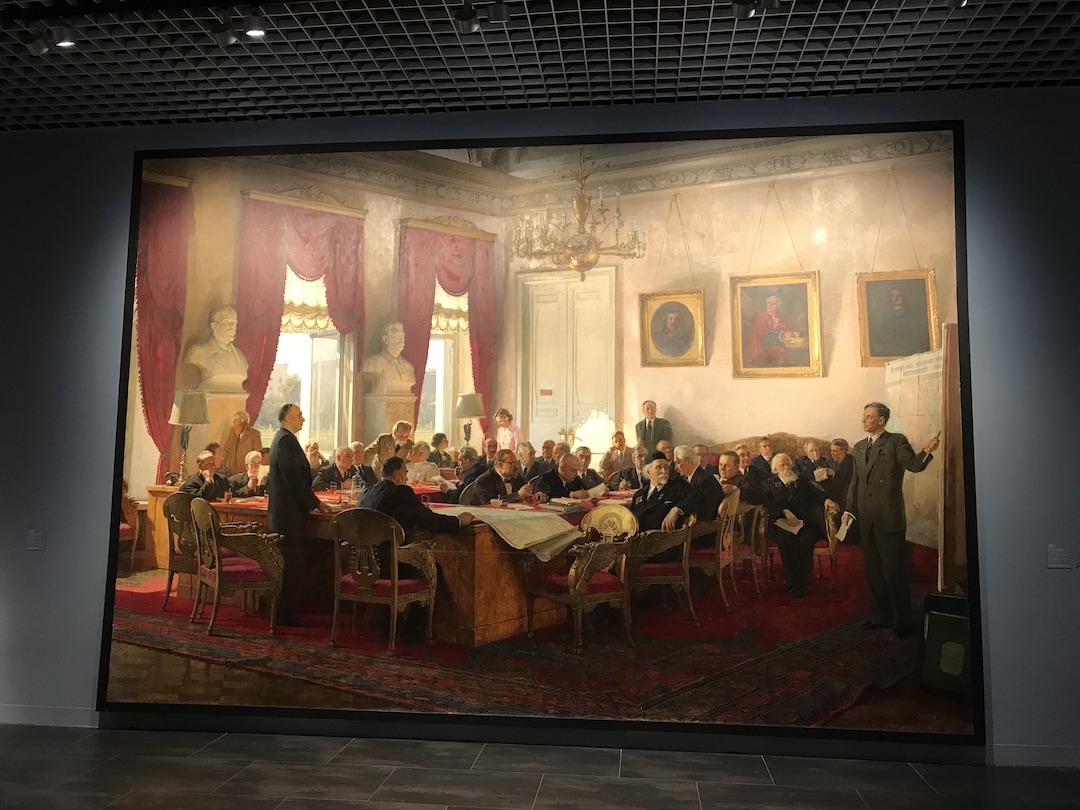 Efanov, Vasily - Session of the Presidium of the Academy of Sciences of the USSR - 1951
Efanov, also rendered as Yefanov, was perhaps the best Socialist Realist portrait painter. Here he creates a believable scene with some attendees focusing on the lecturer, others doing other things. At the far left is a man reading something, and there are others scattered across the room doing the same. At the center rear is an attractive secretary in pink, the only cast member in sunlight (Efanov liked to depict pretty young women). Viewing it all are sculptural busts of Lenin and Stalin. 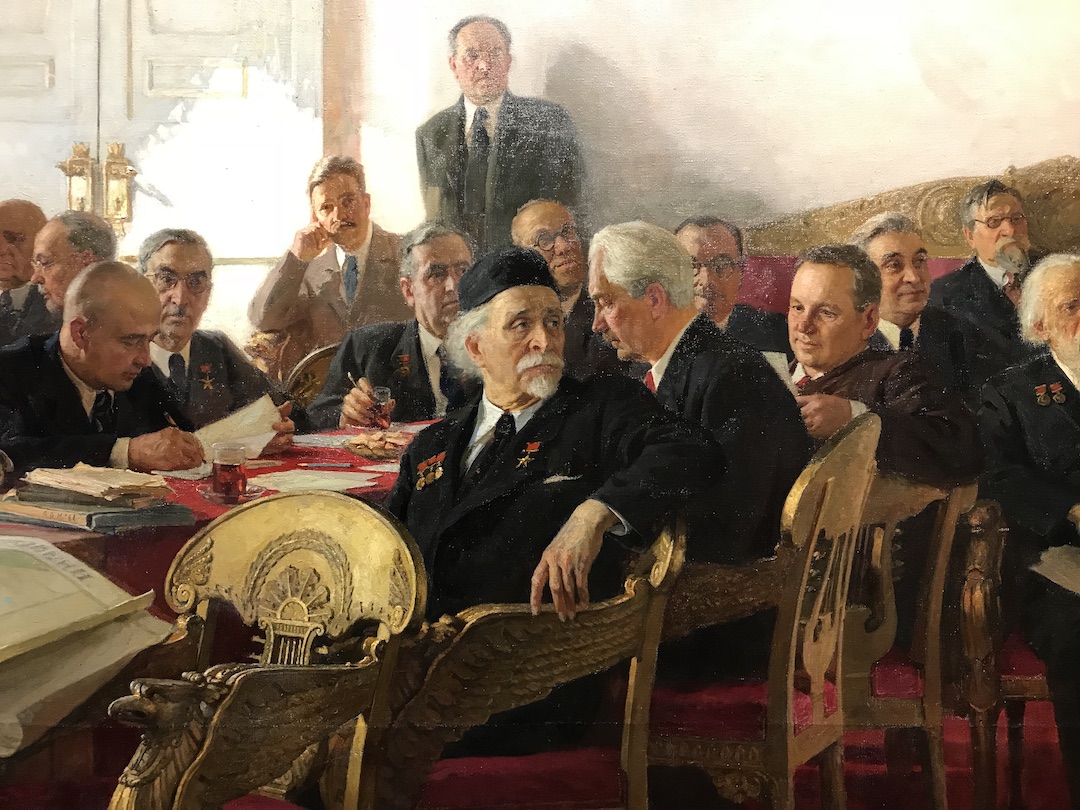 Detail view. Nice study of the old gent wearing a hat and sporting medals on his suit jacket.
Posted by Donald Pittenger at 1:00 AM

I love Russian paintings - a perfect unity of art, history and politics. I suppose all nations do the same with their paintings, but the Russian paintings you selected did it better. Session of the Presidium of the Academy of Sciences of the USSR, for example, is a masterpiece.

So, anyone see the German film "Never Look Away?" out this year? (It's relevant.)