Stanley M. Arthurs (1877-1950) was one of the earliest select students of famed illustrator Howard Pyle. Arthurs first encountered Pyle at the Drexel Institute in west Philadelphia near the Penn campus where Pyle was teaching art. (I myself once taught there: an introductory Sociology class while I was a grad student at Penn.)

Pyle decided to continue teaching at his home base in the Wilmington Delaware - Brandywine Pennsylvania area -- but instructing only those who he considered had great professional potential. The result was something now referred to as the Brandywine School of illustration.

The most lengthy biography I could find on the Internet regarding Arthurs was in this PDF file. Below is an extraction of that part of the document.


"Stanley Massey Arthurs was born November 27, 1877, to Nancy and Joshua Arthurs, in Kenton, Delaware, where Joshua Arthurs owned a general store. Arthurs was interested in art as a boy, and, after leaving school, he studied in Wilmington with Clawson Hammitt, who urged him to study with Howard Pyle. Convinced of his talent, Pyle enthusiastically accepted him as a student. In 1897 Arthurs joined the classes Pyle was teaching at Drexel Institute, and in 1898 he was invited to attend the summer scholarship classes at Chadds Ford, Pennsylvania. His first illustration was published in the December 2, 1899 issue of Harper's Weekly. When Pyle left Drexel to open his own school in Wilmington, Arthurs went with him and worked in one of the studios Pyle had built for the school. When Pyle died in 1911, Arthurs purchased his studio and, until he died, led a quiet, solitary life there, dedicated to his work. He lectured occasionally at the Wilmington Academy and did some teaching in his studio.

Although Arthurs illustrated a great deal of popular literature, his real specialty was illustrating historical texts. His pictures were as historically accurate as he could make them. He did several murals of historical subjects for the State House in Dover, Delaware, and for the Minnesota State capitol building and produced a long series of historical paintings for DuPont Company calendars and the DuPont Magazine. Many of these were published in book form in the American Historical Scene in 1935. The historical illustrations occupied most of Arthurs' attention after 1920, but he also painted landscapes, not only of local scenes but also in Florida, the Western states, and Europe.

Examples of Arthurs' work are presented below. I find his painting style a bit too heavy for my taste, but it was mainstream -- especially in the period 1900-1920. 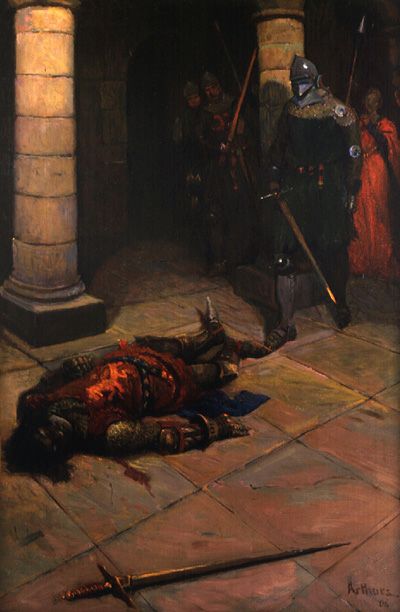 Death of Modred - 1906
Modred was a traitor to King Arthur. 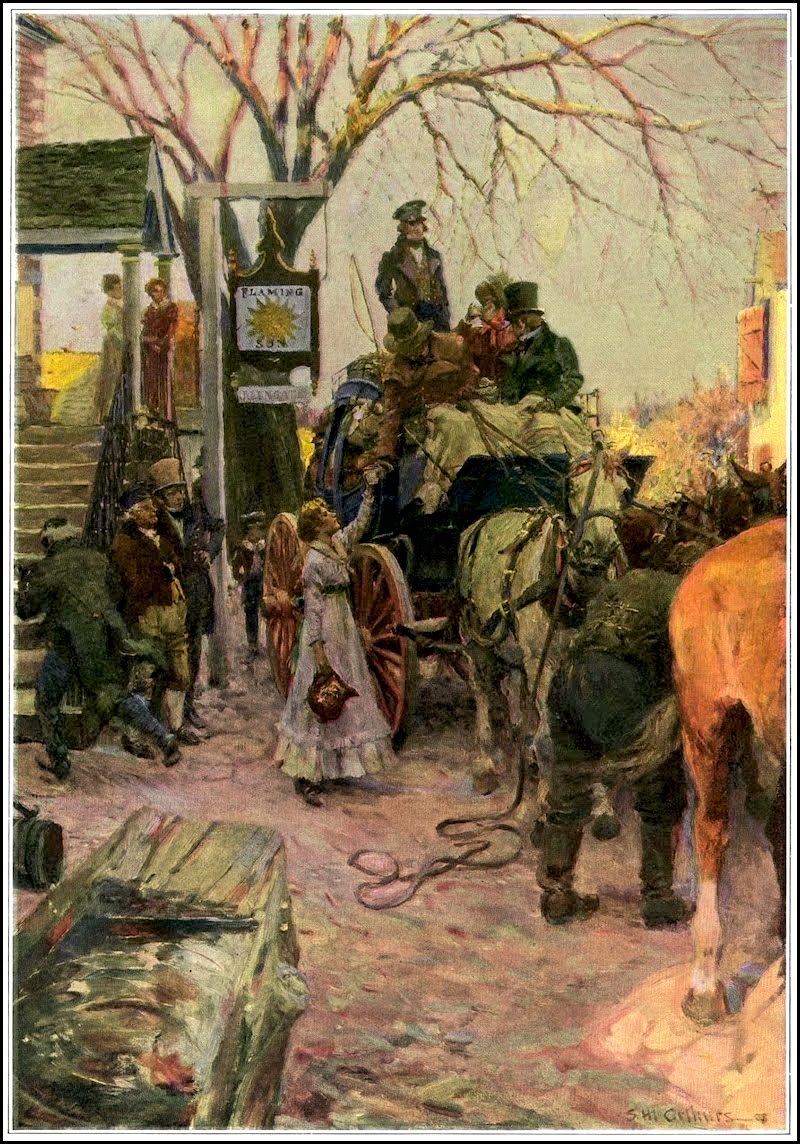 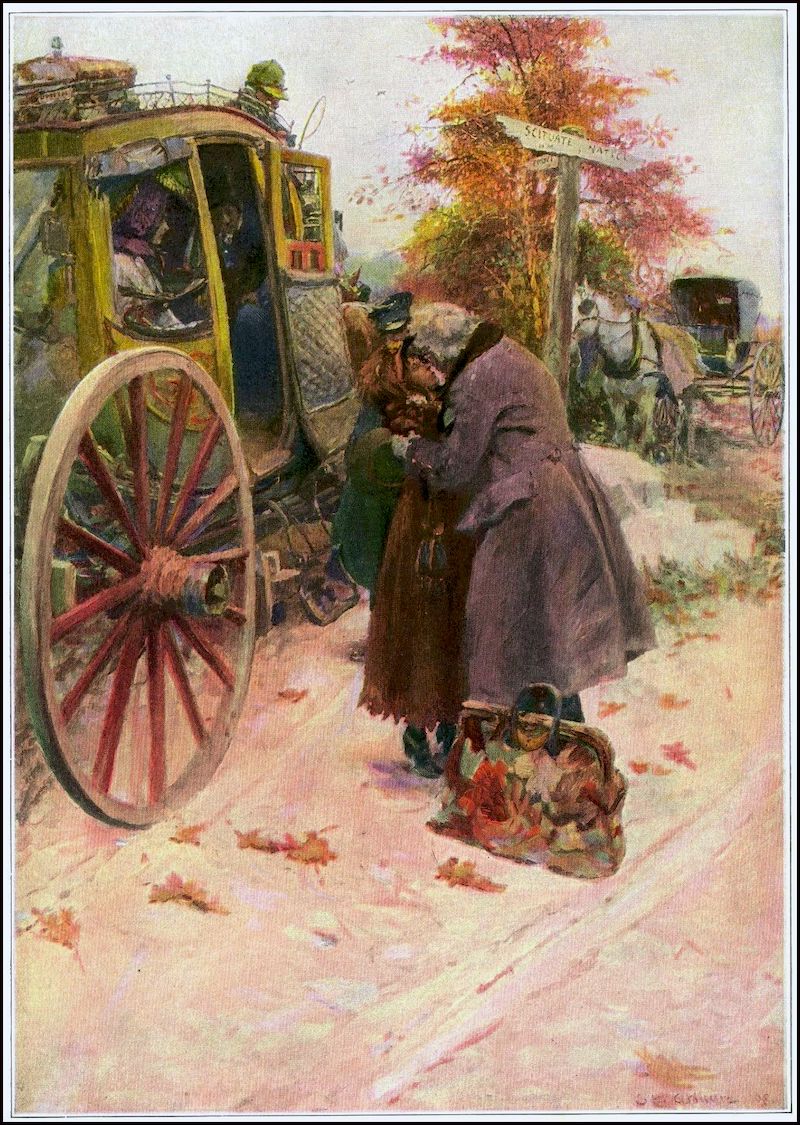 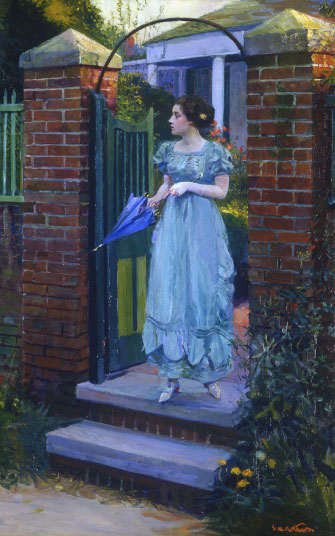 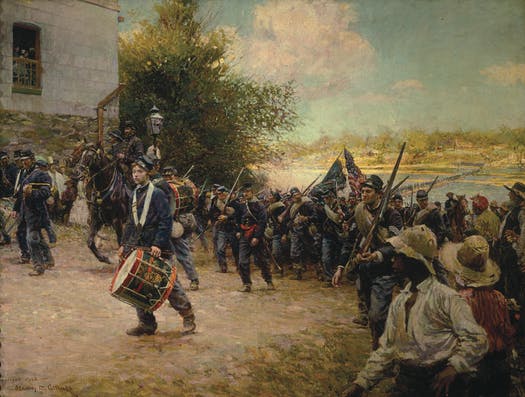 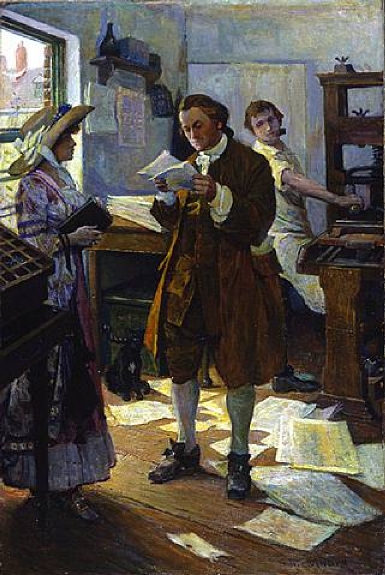 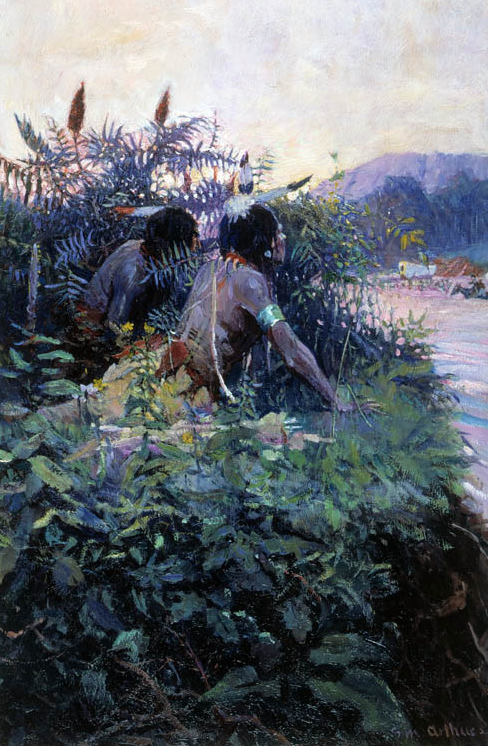 The Fleet - 1912
A somewhat sloppy work. I don't know if this was simply a sketch or if it was published. The warships are not convincingly portrayed -- too sketchy and the perspective seems off. 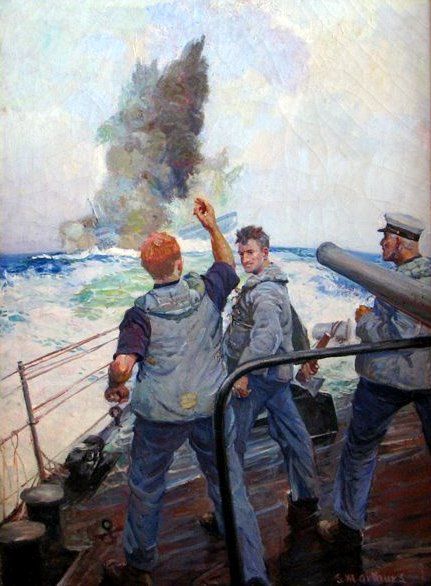 America's Answer to the Submarine - c. 1918
A Great War vintage illustration supporting the war effort, though I don't know where it was published. Arthurs seems to have used artistic license here because submarines were usually destroyed using depth charges. Unless they were caught on the surface, as shown here. But about the only way a German submarine could be caught on the surface by a warship this closely would be if it had been damaged by a depth charge and had to surface. Fortunately for Arthurs, most viewers were probably ignorant of anti-submarine warfare, so such details didn't really matter. 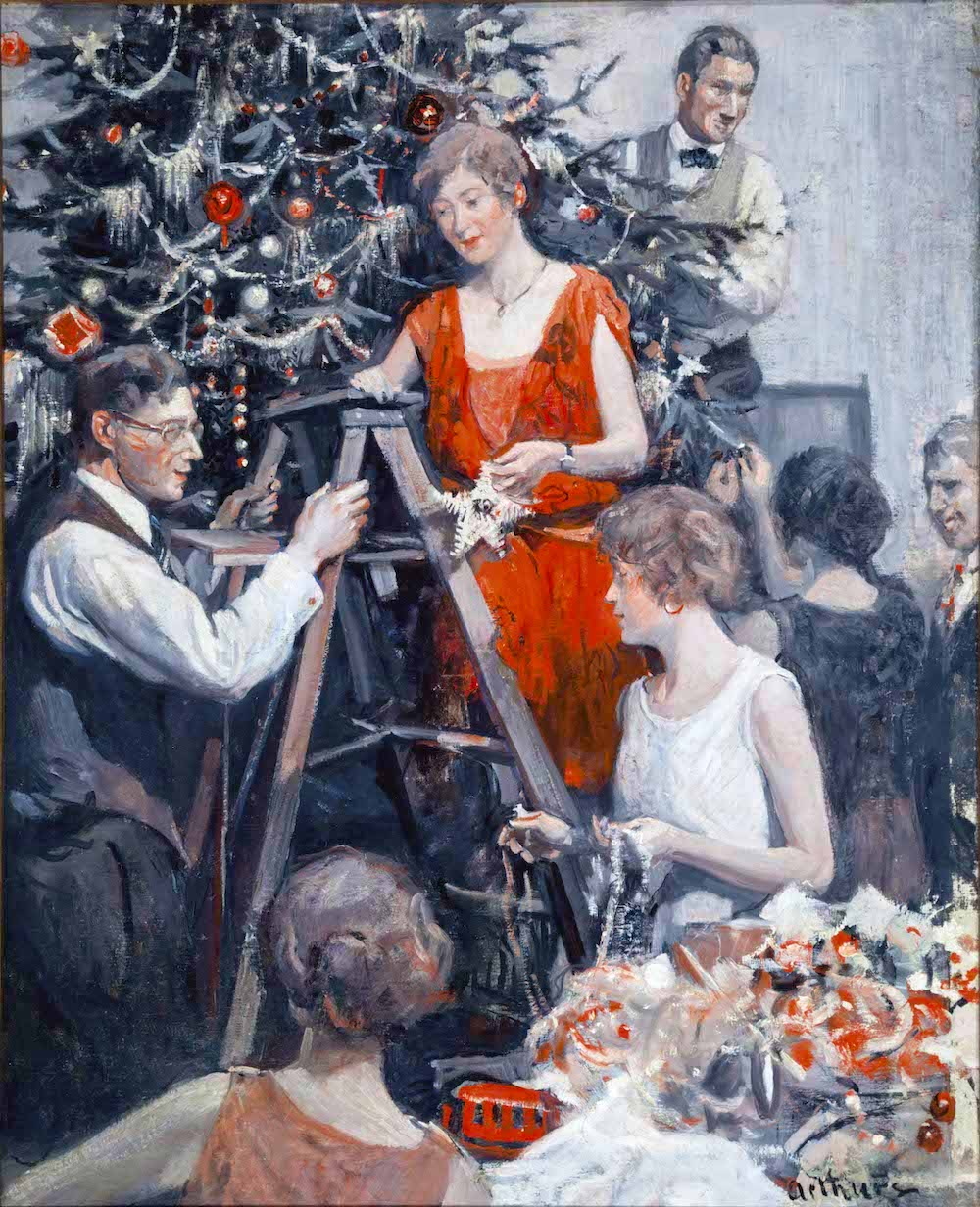 Trimming the Tree
Probably from around 1926. The reproduction was intended to be two-color, a common magazine practice in those days. 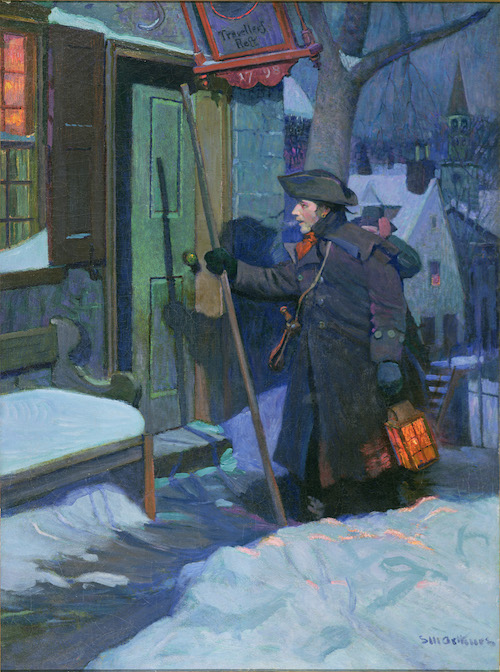