Jules Bastien-Lepage (1848-1884) was short-lived, yet influential in his day and for a few years thereafter. Along with many other talented and inventive painters of the late nineteenth century, he was doomed to decades of obscurity because his style did not fit the revealed historical narrative of Modernism's march to the end-state of painting: abstraction as practiced in New York City in the 1950s.

Bastien-Lepage's Wikipedia entry is here and examples of his work can be found via "Images" on Google or other search sites.

Although he usually featured people as subject matter, he seems to have painted only a few formal portraits. The best-known of these is his Sarah Berhardt of 1879 (for more information on the actress click here). I stumbled across the painting not long ago while at San Francisco's Palace of the Legion of Honor to view an Anders Zorn exhibit that I posted about here. The Bernhardt is not in the museum's permanent collection, being on loan from the Anne and Gordon Getty collection.

Guilty confession: I wrote a Molti Ritratti post on Sarah Berhardt portriats, but somehow failed to include Bastien-Lagage's version of her. I humbly attenpt to atone for this omission below. 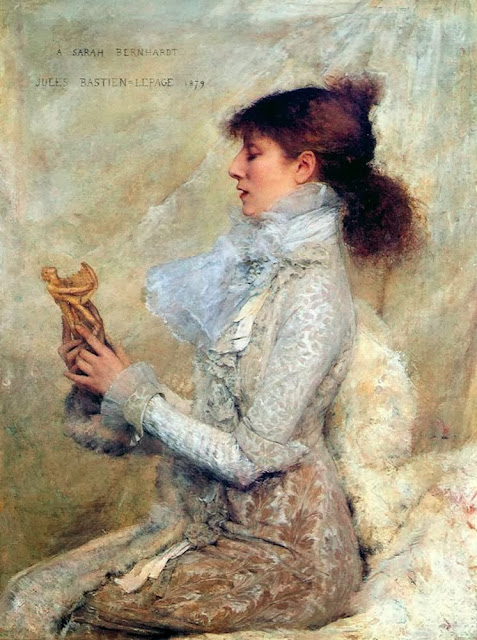 This is an image of the full painting that I found on the Internet. Below is a section of it it photographed at the museum. 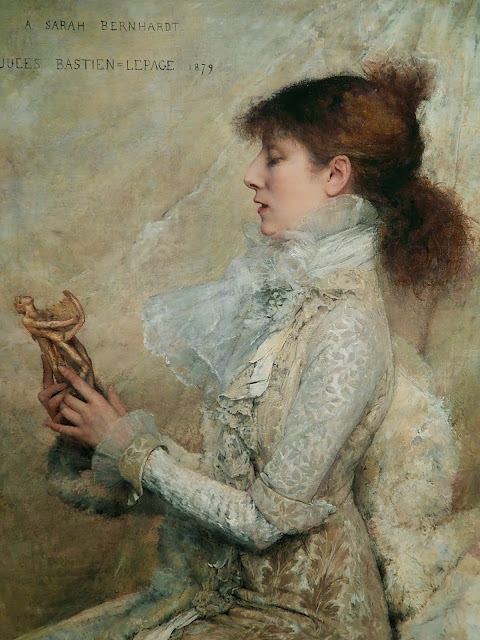 This isn't much of a close-up because the original painting is fairly small. But it offers better detail than the image of the entire painting. Click on this image to enlarge.
Posted by Donald Pittenger at 1:00 AM

Bastien Lepage created a lovely portait of Sarah Bernhardt in 1879. Yes...I have seen many later photos and posters of the star, but they are more posed and meodramatic than this one. Did Bastien Lepage paint her from life?