John Steuart Curry (1897-1946) is best known as a Regionalist or American Scene painter who, like fellow American Scene artist Thomas Hart Benton, enjoyed making turgid scenes featuring people in exaggerated poses.  Perhaps a bit more than Benton, Curry often placed lots of people on his canvasses and murals.  Both artists were most active during the 1920s and 30s when, as my e-book (shameless plug!) explains, the painting world was adrift, not really knowing how to deal with modernism.

The Wikipedia entry for Curry is here, and a longer biographical sketch can be found here.

Living on the West Coast, I don't get to see much of Curry's work which is mostly found in the Midwest or East Coast. Fortunately, the Huntington Library (links here and here) in San Marino, California (near Pasadena) has a nice 1929 Curry in its collection called "State Fair." Click on the images below to enlarge. 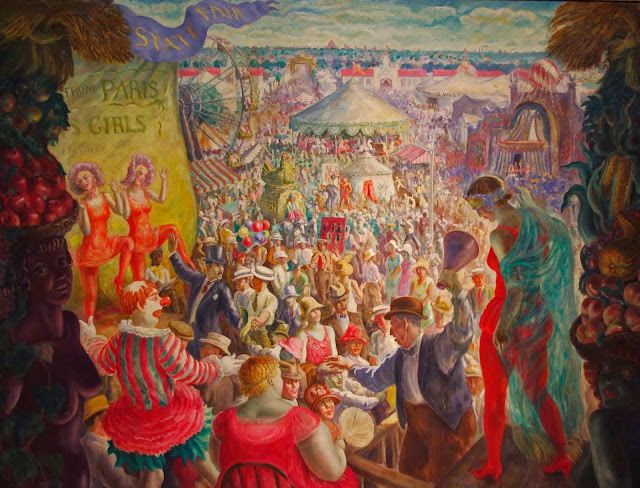 Here is an image of the entire painting that I found on the Web. As you can see, it contains a cast of hundreds, if not thousands. The dominant colors are red and a complimentary blue-green; more on this below. 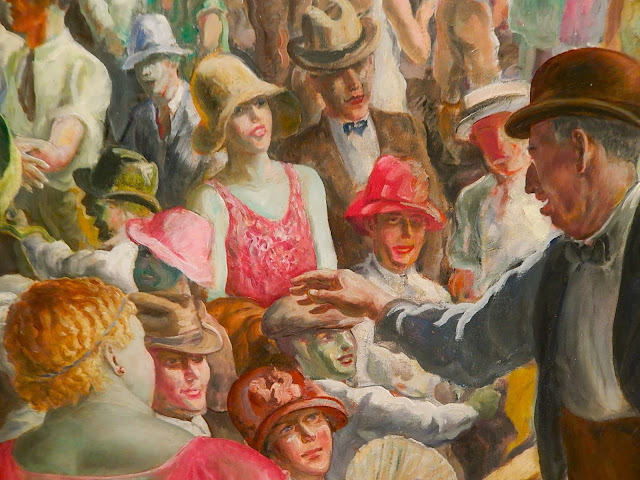 I took this close-up photo and the one below when I visited the Huntington in November. Here you can see how Curry simplified most of the faces of his subjects. He also gave some a blue-green complexion while others have more normal pinkish skin. The most obvious examples here of the former are the boy just below the barker's hand and the gold-haired lady at the left with her back to us. 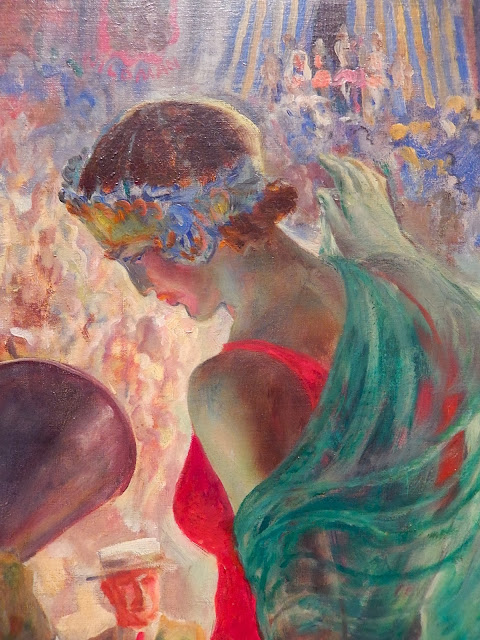 The image of the entire painting reveals that the woman featured here was given a rather large (excessive?) pelvis area and legs. But the segment I photographed seems anatomically satisfactory. Note Curry's use of both reddish and greenish hues on the unclothed areas. I suspect that Curry found her the most interesting part of the painting to deal with because he seems to have spent the most thought and care here.

For your entertainment, Don.
http://www.dailymail.co.uk/news/article-2550126/Is-Master-Mini-Monet-This-11-year-olds-paintings-fetched-1-5m-Weve-paired-six-works-priceless-masterpieces-Can-YOU-tell-apart.html