How (Not?) to Honor a Classic 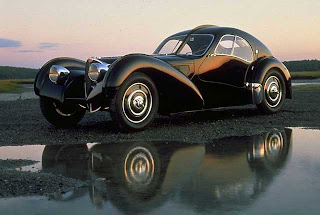 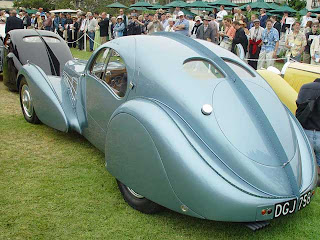 The cars shown above are two surviving examples of the Bugatti 57SC Atlantique. Four were built and two or perhaps three survive. I consider this one of the most outstanding car designs ever -- an opinion held by many. The black car is owned by fashion magnate Ralph Lauren. The blue car was auctioned last year for an estimated $30-$40 million (an account is here). The Wikipedia article on the Type 57 line in general is here.

Automobile Magazine's February 2011 issue has a Page 63 sidebar by its car design writer Robert Cumberford concerning a project to create a "retro" version of the un-produced Type 64, what might have been the successor to the 57. I could find no on-line version of the article to link to, so here is an excerpt featuring Cumberford's case.

[I]n an alcove [of Peter Mullin's private automobile museum] stood one of only two extant prototype cast-aluminum chassis for the Bugatti Type 64, the model intended to follow the successful Type 57, introduced in 1934 and made in some 700 examples. That's not the problem; the chassis is fascinating. But it's surrounded by sketches and models of some absolutely horrifying bodies proposed by students at the Art Center College of Design, one of which may actually be erected at great cost on that unique, irreplaceable platform. The idea of creating a new body is fine, but I am distressed that unformed and uninformed youngsters have been entrusted with a task for which -- on the evidence presented -- they are incapable of executing.

They've done a series of Kalifornia Kustom adaptations of Jean Bugatti's 1935 riveted-magnesium Aérolithe ("meteor" in Greek) design that led to the Atlantics, as though Jean had had to rummage through discarded sketches to come up with a slight variation on older designs. ...

To properly honor Jean Bugatti's heritage with a new Type 64 body, designers need strong historical awareness, and they must know what precursors in form existed in 1940 [the year after Jean Bugatti was killed in a driving accident] along with the techniques and materials in use at the time. Using that knowledge -- and absolutely nothing that arose in the subsequent 70 years -- those students might have created a reasonable proposition. ...

What the students have done is anathema to me. Wouldn't it be better just to leave the bare chassis on exhibition?


Not quoted are references to the fact that Bugatti had built "tank" style racing cars with streamlined (for the time) bodies that eliminated separate fenders. This implies that Ettore and his son Jean (had he lived) might well have created a car in tune with styling zeitgeist of 1940: teardrop-shaped bodies pushed to beyond the outer edges of, and perhaps covering, the wheels. Such designs could seem sleek on paper, but usually turned out looking bloated on the few occasions that they were actualized, so it's possible the Bugattis might have attempted something leaner. But unless archival evidence appears, this is something unknowable.

As for me, I'm of two minds regarding Cumberford's harsh (for him) judgment. A modernized Atlantique is probably what Mullin and those Art Center students had in mind all along, and not a scholarly might-have-been design such as Cumberford advocates. For a show car, this doesn't bother me. On the other hand, if the goal was to suggest what a Type 64 might really have looked like, then Cumberford has a strong point.

Hopefully cooler heads will prevail. Or maybe just one hot head who's willing to call bull on the entire matter. I won't hold my breath for an adult to "uncool" himself in this way.

The problem with creative destruction is that "creative" has no necessary relationship with "quality."

I thought Chrysler did a rather good job with their Chrysler Atlantic from a few years ago.