Segovia is worth a visit if you like picturesque cities and architecture. It lies about an hour's drive to the north-northwest of Madrid, so doesn't present a large detour when trip planning. However, it deserves a minimum of half a day's time on-site, and I'd set aside an entire day to do the project justice.

Like most places in Europe, there's a new city and an old city. The old city lies atop a mesa that has been described as boat-shaped and the modern city occupies low-lying ground and nearby rounded hills. Connecting the nearest hill and the old city is an aqueduct built by the Romans that was still in service in the 19th century.

The old city has lots of narrow, winding streets, a few plazas, a fine semi-gothic cathedral and, at the sharp end of the mesa (dare I call it the "prow"?) is a Viollet-le-Duc style (though he wasn't involved here) restored Alcazar, or fortress-castle.

Aside from a few glimpses of the latter, the photos below deal with less imposing buildings found around the old city. The pictures were taken last October and are not adjusted in any way. They are concerned with various kinds of texturing found on those structures. This detailing fascinated me, and I hope you too will be interested. 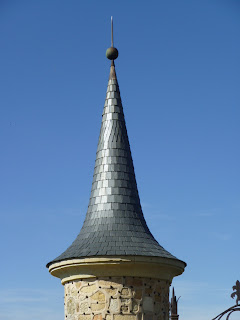 This is a tower on the Alcazar, the pointed top probably a feature concocted during the 19th century restoration. Regardless of its provenance, it has a romantic flair. Note the variation in the top's cladding. 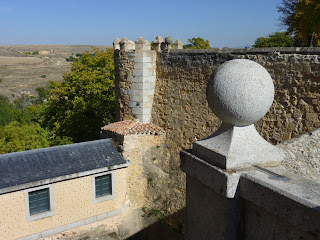 This shows part of the Alcazar's wall. See how the stonework varies near the wall's intersection with the structures at the left. 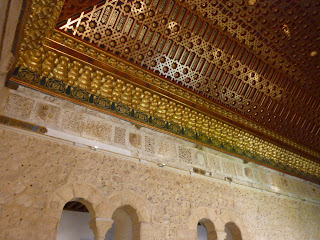 A room in the Alcazar. 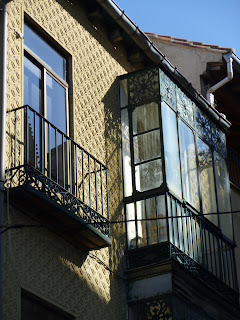 Now we switch to old city street views. The projecting window can be found here and there in Spain. The one shown here is actually an enclosed balcony. I speculate that it has to do with the comparatively harsh winters experienced in the high country of central Spain; it makes a balcony useful year-round. Note the textured wall on the left. This is characteristic of Segovia. The following photos show some of the variety in textures I saw. 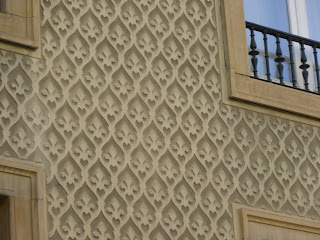 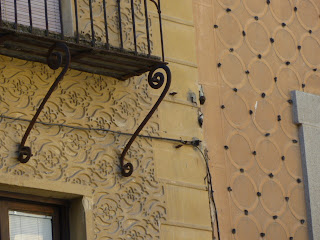 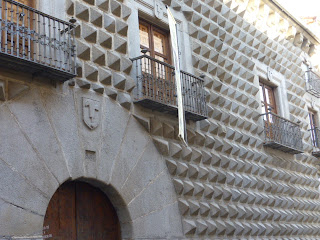 The picture immediately above shows a texture pattern unusual for Segovia. It's too much of a not-so-good idea, but fortunately is contrasted by the large expanse of plain stonework on the arch over the door. 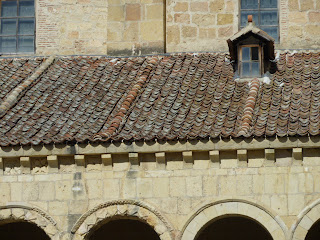 What's interesting here is something I noticed in Segovia, though it might be elsewhere in Spain. It's how the roof tiles are laid. Such tiles are conventionally laid with the rounded part facing upwards on the topmost layer of tile: call it convex. But here it's the reverse. Aside from some decorative bands, the tiles are laid in a concave position. 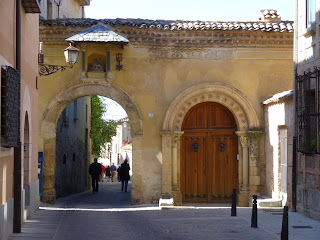 This photo doesn't have much to do with texture. I include it because I find it charming. 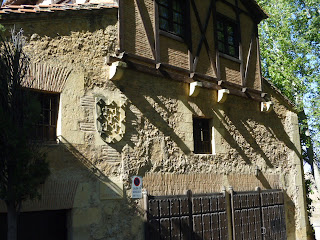 This was the ultimate in texture-mix in the collection of photos I took. Half-timbering, detailing on metal gates, two kinds of brickwork, cut stone, rubbled stone -- a feast! Click on the image for a slightly larger view.

Textured walls in Britain are usually explained as a means of keeping the wall dry - rain running down the wall gathers on the protrusions and drips off. I doubt that that explanation is offered much in central Spain, is it?

dearieme -- I don't know the background of the Segovian wall detailing. I suppose I could research it, but I got re-hired for another temporary stint with my old employer and won't have a lot of spare time till the end of June.

Besides, speculation can be more fun than finding out actual facts (so long as the issue is reasonably trivial). My initial guess is that once upon a time someone thought stucco walls were dull and created a patterned surface. Then others got into the act and ...

Don, I was largely being sarcastic. The rain explanation is iffy in Britain, not least because one of the pleasantest traditions is in East Anglia, the driest part of the country.
http://en.wikipedia.org/wiki/Pargeting