There's something about size that appeals to the rational, technically-oriented mind. In certain circumstances, that is. Circumstances where economies of scale seem applicable. The problem is, size cannot become infinitely large or even "seriously large" without the object in question becoming unaffordably expensive or key components demanding features beyond the state of their engineering art.

An instance of the first case is the "paper battleship." Naval planners during the period, say, 1910-1940 would prepare concepts of future battleships. This might begin with the idea of using really large main armament -- an 18- or even a 20-inch shell, perhaps. But the rest of the vessel would have to be scaled to support such armament. And the price of such a ship might consume much of the navy's construction budget; a class of three or four ships would be prohibitive, not to mention the tactical and strategic consequences if one of those super-battleships was sunk. The Japanese Yamato class came close to this potential overkill and the United States planned, then cancelled, its Montana class which was more a super Iowa than a Yamato.

For aircraft, there are several problems related to large scale. The Boeing 747 in its early days and the new Airbus 380 forced upgrading of various airport facilities and earlier, relatively large aircraft such as the DC-3 airliner led to the replacement of grass landing fields with airports with concrete runways.

A more serious problem has been that aircraft engines weren't capable of reliably supplying the power required by huge (for the times) airframes. This problem became acute by the early 1940s when piston engines became increasingly complex and unreliable as power requirements grew. In short, their technology was reaching its natural limits. The solution was gas turbine engines, but it took 10 or 15 years for their technology to reach the point where power, fuel economy and reliability converged to where they could be used on commercial aircraft.

Just for fun, below is a gallery featuring ultra-large transport or cargo aircraft from the period centered on the late 1940s. Some were powered by those maxed-out piston engines and one used the new, trouble-prone turbine technology. I also dealt with large aircraft a while ago in this 2Blowhards post.

Douglas C-74 Globemaster
Several aircraft have sported the "Globemaster" name: this was the first. Only a few were built as it was succeeded by the pudgy, double-deck C-124 that saw considerable use. I once flew in one of the latter from Kimpo airport near Seoul to Tachikawa airbase in Japan many years ago. An interesting feature seen on the C-74 that must have caught the fancy of Douglas designers is the double bubble pilot / copilot canopy arrangement that gives the plane a bug-eyed look. This was also used on Douglas' XB-43 "Mixmaster" prototype bomber. All very futuristic, but impractical for cockpit operational coordination. 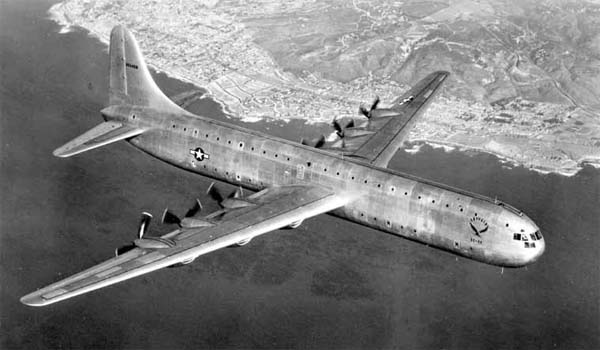 Convair XC-99
The XC-99 was derived from the B-36 bomber. Pan American even considered ordering some, but decided to stick with more practical planes such as the DC-6 and Boeing Stratocruiser (which itself had engines that weren't paragons of reliability). Only one XC-99 ever flew. 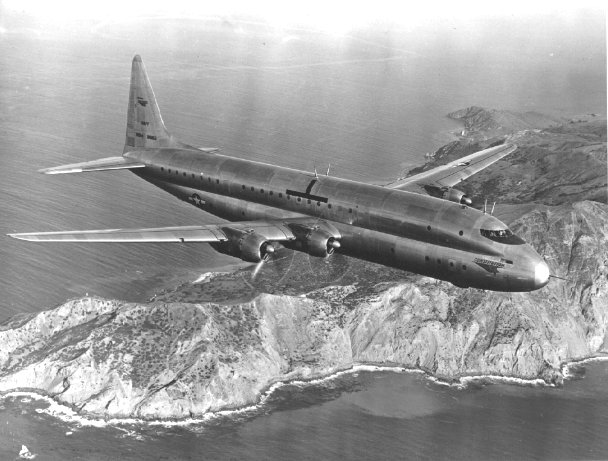 Lockheed R6V Constitution
This was a Navy job. As the link notes, hardly any were built. 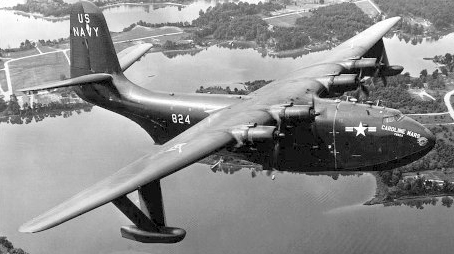 Martin JRM Mars
Another Navy transport, this a seaplane. The original Mars had twin tails. A few were built and saw service. If World War 2 had lasted another year in the Pacific, there might have been more in service.

Bristol Brabazon
Britain's Brabazon was spawned by a government committee, as were several other prototypes and minimal-production airliners (the main exception was the Vickers Viscount) that seemed nifty at the time but didn't even match the needs of government-controlled airlines. The Brabazon's development was long and it had no real chance of seeing airline service. 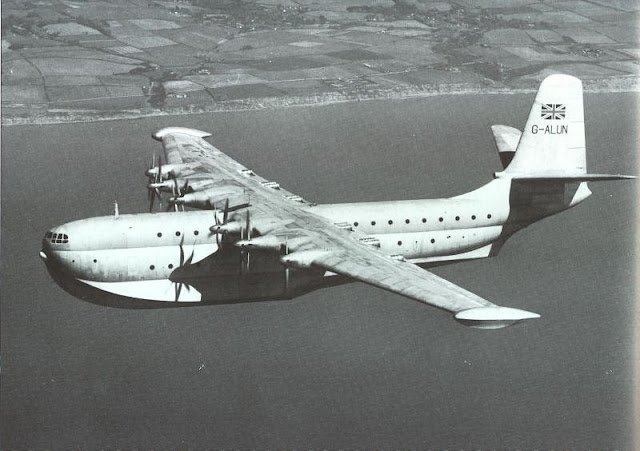 Saunders-Roe Princess
Flying boat airliners had pretty well seen their day by the end of World War 2, but that didn't prevent the British giving the concept one last stab in the form of the Princess. One more instance of too much, too late.

Posted by Donald Pittenger at 3:04 AM