Some car makes stick to styling themes or detail cues for decades while other brands toss away the past when launching a total redesign.

I'll be touching on this choice from time to time in future posts because it's an interesting subject, given the huge financial risk taken when retooling a car line.

The continuity school of thought holds that, since a good deal of money has been invested in establishing a brand image and if sales have been satisfactory, it's best to build on that widely recognized image. Luxury makes such as Mercedes, Rolls-Royce and (at one time) Packard also did not want loyal customers left in the lurch in the form of a total makeover.

The change-everything rationale is less clear. Where an existing design is a sales failure, it makes sense to wipe the styling slate clean to eradicate a bad image. The case for clean-slating a successful design is harder for me to grasp. Perhaps the thinking is that Brand X already has the image of being progressive/innovative, and something different is what buyers have come to expect. Or maybe corporate management doesn't accept or perhaps even understand the logic of continuity.

I bring this up because Chrysler is expected to offer a major facelift for its once-popular 300 series sedan for the 2012 model year. If the company could afford to create a new "platform" this might be really interesting: To what degree should a successful design be tampered with?

Chrysler's styling history tends toward the clean-slate school. Consider these designs from the past 20 or so years: 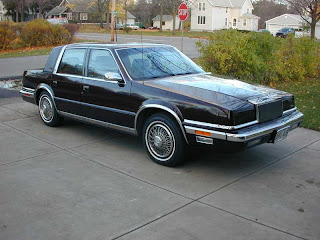 Chrysler New Yorker - 1988
This is a version of the famous "K" platform of the early 1980s that helped save Chrysler Corporation under the helm of Lee Iacocca. 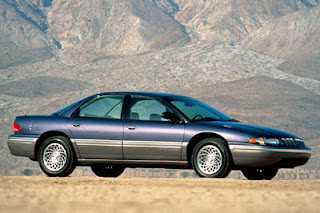 Chrysler Concorde - 1993
By the early 1990s, the K line was becoming old-hat and in need of replacement. Tom Gale, Chrysler styling supremo 1985-2000, was instrumental in creating a totally different replacement.The new styling concept was called "cab-forward" where the driving position was sited closer to the front of the car and the boxy K lines were replaced by a more rounded, more aerodynamic shape. This design was risky because it deviated somewhat from the competition, but it resulted in better sales than in the declining years of the K styling. 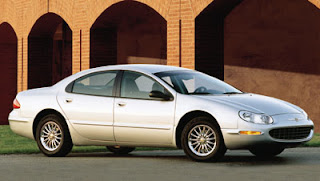 Chrysler Concorde - 2001
The 1998 model year saw a new (or perhaps extremely-heavily facelifted) cab-forward design. The previous image was continued, but in even more rounded form. As this style began to age, Chrysler was faced with the choice of continuing the cab-forward look or trying something different. 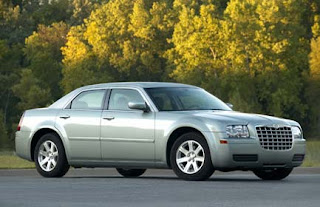 Chrysler 300 - 2006
Chrysler came up with something radically different for the 2005 model year -- the almost instantly-iconic 300 styling mated to rear-wheel drive (the other cars shown above had front-wheel drive). A sort of continuity was effected by using the traditional Chrysler "medal" insignia and a grille treatment that echoed the "woven" look of late-1940s Chrysler grilles. But these touches were minor in the context of the at-the-time shocking styling. I suspect the change happened because the cab-forward theme had been pushed about as far as possible and had been in production in one form or another for more than a decade; another round of it would have meant seriously stale styling.

Based on photos I saw recently of the facelifted 2012 Dodge version of the 300, windows likely will be enlarged. To what extent the style character of the car is to be changed remains to be seen. I'll provide a styling analysis when the 2012 models are announced.

Posted by Donald Pittenger at 4:10 AM

Forgive my ignorance: are these cars rear-wheel drive, with fore-and-aft engines, or front-wheel with side-to-side engines?

V8 or V6 or something else? And do these questions matter when it comes to appearances?

derieme -- The first three cars pictured were front-wheel drive and the latest one is offered with rear-wheel drive (with 4-wheel drive as an option).

The K-car had only a four-cylinder motor. The cab-forward jobs had only V-6s. The recent 300s offered V-6s and the "hemi" V-8 was in the 300C model. I owned the small-block 6 which was peppy enough for most purposes. So far as I know, all engines were aligned front-rear.

Styling-wise, the front-drive feature on Chryslers and most other such cars is associated with the considerable front overhang seen in the photos. The "traditional" rear-drive allowed Chrysler stylists to reduce the overhang.

Actually, this car was based on early-2000s Mercedes E-series sedans. Not the body, but suspension and other engineering details. Large Mercedes never went front-wheel drive, a feature not suitable for large automobiles.