Only because the timing fell into place given my various other commitments (including a lot of travel the past few months), I recently was able to attend a couple of free painting demonstrations at the Daniel Smith paints factory / art supplies store in south Seattle's industrial zone.

Both demonstrators said that they were instructed in the ways of something called Russian Impressionism. The term seems slippery, if a short Google session is any guide. For example, one hit dealt with a book dealing with Russian painters influenced by the French Impressionists; presumably this took place as early as the late 1870s. Another hit was for a Phoenix-area gallery with a collection of Soviet non- Socialist Realist paintings of 1940-1960 vintage. A third hit was to this page, which seems pretty comprehensive and dates the movement to 1930-1980.

On a more concrete level, the demonstrators had the habit of tucking a roll of paper towels under one arm to facilitate quick brush-cleaning. This practice was used by Sergei Bongart (1918-1985) and apparently continued by a number of his former students, one of whom taught the guy who did the first demonstration.

Bongart's Wikipedia entry isn't very useful, so check out this link to his widow's Web site for more biographical information. 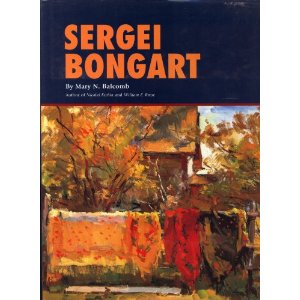 The day after attending the second demonstration I was visiting the shop at the Frye Art Museum and noticed the book whose cover is shown above. Its Amazon link is here, but for once Amazon's price (about $150 per copy at the time of this posting) was greater than the shop's $95 tag (the publisher's price). Even though the cost was a lot more than I like to spend for any single book, I bought a copy.

It's a pretty good book. Plenty of illustrations and information about Bongart's life and teaching; besides selling his paintings he seems to have been a demanding, yet popular art teacher, having his own school.

Where the book falls down is the part dealing with his escape from the Soviet Union to the West. Bongart was born in Kiev in the Ukraine half a year before Lenin's Revolution. He seems to have been a prodigy and so studied art in the main Kiev art school. The Ukraine was quickly overrun by the German armies in the summer of 1941 and Bongart found himself behind the German lines for the next couple of years. Not explained is how a healthy 23-year-old hadn't already been conscripted by the Red Army. The book's chronology of how he left Kiev and wound up in Bavaria at the end of the war confused me completely. Passages treating the sequence of his dealings with American, German and Russian soldiers and officials do not jibe with my understanding of how the war unfolded 1943-45. This had little to do with his art, but I found it very annoying because the story would have been interesting on the personal level had it been related coherently.

Since this is an art blog, let's move on the Bogart's paintings which, like his teachings, are forceful. 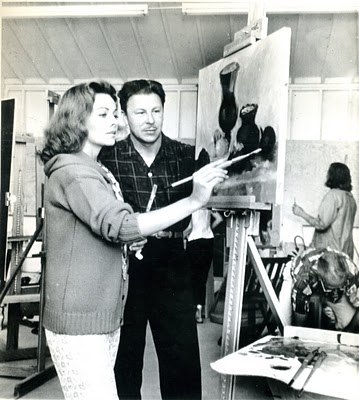 Bongart with actress Jeanne Crain - 1962
Bongart was a gregarious guy who made friends easily -- including people in the movie business, starting with James Cagney. 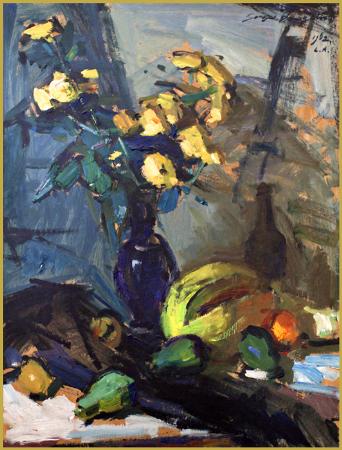 Still Life - c.1960
Bongart believed that if one could paint still lifes (especially those containing variations of the same basic color), one could paint anything. So his students usually started in the studio with a carefully composed still life setup before them. 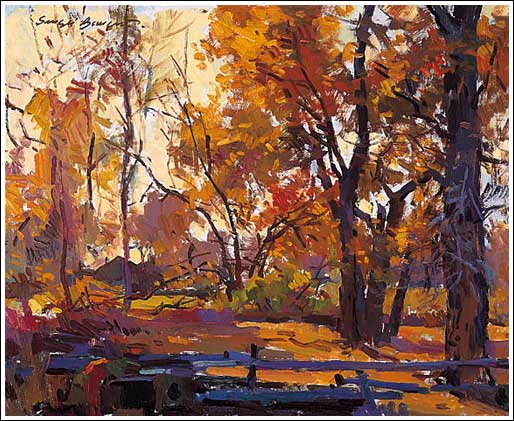 Autumn Scene
He painted lots of landscapes, but I couldn't find many good examples on the Web. 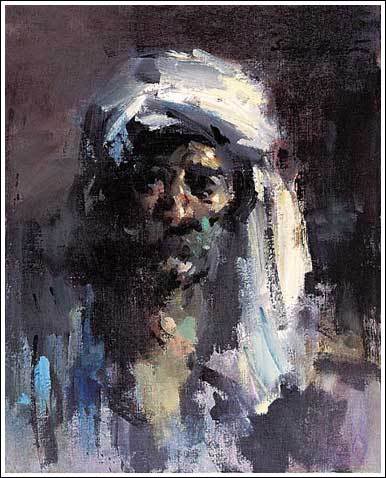 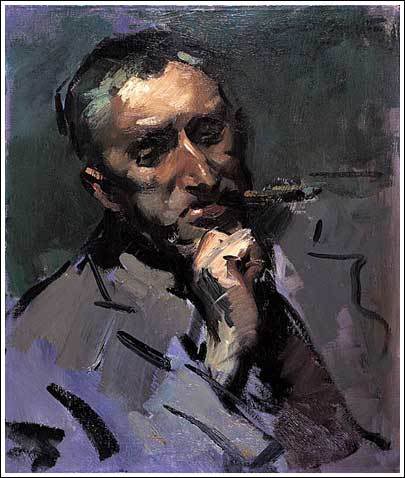 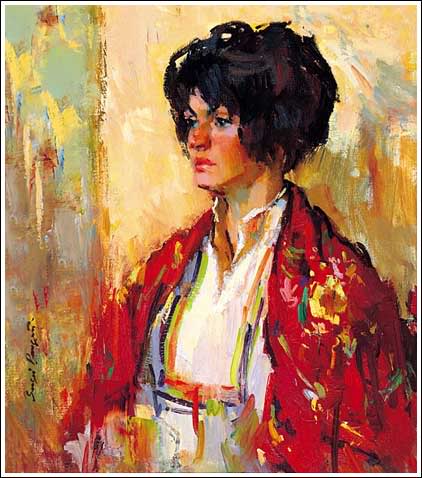 Girl with Red Shawl - c.1975
Bongart painted commissioned portraits, but didn't enjoy such work. The examples above might have been from demonstrations or maybe were simply recreational works.

Bongart liked to exaggerate color and paint in an athletic manner, thrusting his paint-loaded brush to the exact (in his mind) place where its color would relate to or modify those already on the canvas or panel. The resulting works tend to be a bit too sketchy for my taste, but I respect them because they are usually interesting to view and incorporate more accurate drawing than many modernists utilized. Bongart was no fan of modernism, by the way; I'll probably post some of his remarks on the subject later.

Posted by Donald Pittenger at 1:50 AM

Thank you for this small post about Bongart. My grandpa took some lessons from him and bought a good-sized painting from him. The painting hung over grandpa's fireplace and it always intrigued me. It was full of those sketchy, vibrant colors and I loved it. Many years later, when both grandparents had passed, I asked my uncle, who got the painting, who painted it. He told me: Sergei Bongart. Since then, I have bought the same book by him that you mentioned and I love his work. I wish that I could have taken some lessons from him too. I did buy the demo DVD that his widow created, demonstrating Bongart's technique. Thanks again.