What They Say and What We See


I don't get many unsolicited emails. Where I can, I usually unsubscribe. A few sources I let linger on for a while due to cussedness or idle curiosity on my part. I recently received one from somebody named Aron Packer who apparently operates an art gallery in Chicago; he was touting an upcoming show. I was about to zap it when the thought struck me that I was being handed a nice bit of blog material -- and if there's one thing a blogger needs, it's new material to blog about. The big, fat juicy blog fodder? -- some notes about artists in that upcoming show.

One of that things that induces a gag-reaction from me is arty talk, either verbal or written. The worst is art-gush, and even long descriptions and analyses of paintings can something elevate my reaction from glazed eyes to incipient gag. I'm of the school of thought shared by Harley Earl, the legendary creator of styling at General Motors, who shut styling staff members up by announcing that if a design or design feature required explanation, it couldn't be of any use in a production car; its merit had be be visually obvious.

This being an art and design blog, I have to write about the images I display. But I try to keep things short, dwelling mostly on technical matters and minimizing or ignoring social or psychological factors that might (or might not) have driven the artist to do what he did.

And I try to avoid the gushy, pretentious verbiage of the kind that Packer included in his email. Though I understand that he was engaging in marketing to a target audience of art critics and other writers on art who probably do not share the biases I just mentioned.

Here is what was written about Paul Lamantia:

"Of all the strategies, notions, and approaches to modern art, for Lamantia there was never a choice, but a desire to follow a certain direction, that came in the form of an obsession. That obsession was with his dreams and visions, and the need to record and communicate his feelings about them. It is difficult because the work is always changing. It is in a constant state of flux where narrative and psychological possibilities are set in motion and clairvoyant and hallucinatory occurrences can become painted realities. There is no fixed approach to these aesthetic problems Lamantia has created for himself. The works are structured in a subjective state within certain compulsive confines meant to draw the viewer into the dream. It is not always possible to make the illusion accessible to the viewer. The intention is not to illustrate, but to translate them into something real in the form of meaningful images. There is no preconceived planning of visual invention or execution of materials. This method creates artistic challenges and needs that may only be satisfied by exploring new ways to express one's vision and to express one's aesthetic problems. To base the work on conceptual or formal values would be a misinterpretation. The paintings and drawings are meant to be introspective events and should be experienced on an emotional level."

Below is an example of Lamantia's work I found on the Web. 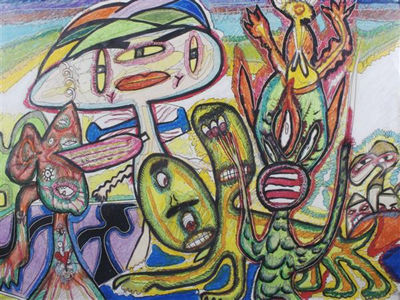 Other examples look fairly similar, so I suspect that the business about dreams, visions, obsessions and much of the rest is simply marketing blather from the point of view of the artist (who would likely strongly deny it was marketing blather). My take is that the guy simply likes to paint that sort of semi-surrealist stuff and has evolved a style that sells well enough to for him to usefully supplement any retirement income following a 25-year stint as a public schools art teacher.

Next, Packer writes about Brett Eberhardt:

"The imagery in Eberhardt’s paintings invite the type of reflection that occurs when one slowly observes one’s surroundings and realizes the human activity, both intentional and unintentional, that led to the current physical state of an interior space and the objects within it. It can be a beautiful thing, this combination of intentional and unintentional actions accumulated over time. The result of use and wear can be unpredictable, even mysterious, making what was once a plain white wall an abundantly rich surface and subject. This change that occurs over time and activity have a lot in common with the sequence of events that take place when building a painting. His painting process starts as a very controlled deliberate act, but over time becomes an embrace of all that painting has to offer, including those unexpected occurrences that can be so crucial to the life of a painting. Although he is after a convincing rendering of the subject, Eberhardt is not interested in creating a slick artificial surface or a hyper realistic image. The construction of the image with paint comes at the forefront and serves as a compelling record of his activity and process, a combination of intention, accident, deconstruction and reconstruction. It is important that these images are constructed with this material, not simply to elevate the subject, but for the discovery and possibilities of the medium used to construct the image." 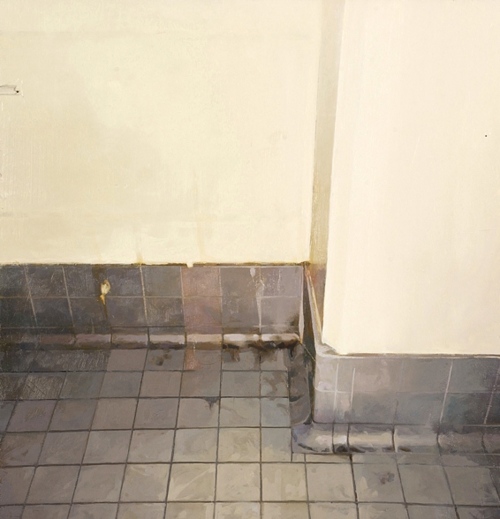 Above is an example of Eberhardt's work. The text strikes me as pretty much an elaborate and dramatized discussion of the process most painters go through when executing a painting -- hardly a struggle of cosmic dimensions in most cases. After all, Eberhardt seems to be basically painting still lifes of one kind or another. All the verbal drama seems to be just more marketing.

Please note that I'm all in favor of marketing art and artists. I also happen to think that something less extravagant than what I quoted above ought to work just about as well as Packer's verbal pyrotechnics.

Posted by Donald Pittenger at 2:07 AM

I also think it is counterproductive when this type of writing appears on museums. We have the exact feeling you mentioned: what we are seeing doesn't match what we are reading.

I have enjoyed your site. I think I found it by "ixquick"ing Ottoline Morrell. I'm reading a not bad biography by Miranda Seymour.

I suspect artists are somewhat involved in "wilful mystification" but the patrons such as Morrell were equally involved, surely. Maybe more so. My theory is that as the West moved away from myth and religious belief the need for mystification moved to the verbal rather than pictoral. Morrell, however, was supposedly a devout Christian. At least until 1909 which is where I'm at in the book.