I had hoped to do a posting on William Orpen (1878-1931) several years ago when I was part of the 2Blowhards blogging team, but co-blogger Friedrich von Blowhard claimed dibs on Orpen. Time passed and 2Blowhards closed down as a going concern (though as of when I write this, it can still be accessed) and Friedrich had never got around to doing that Orpen post.

Orpen's Wikipedia entry is here if you want biographical information. His background was somewhat unconventional, being a Protestant born in the Dublin area and sympathetic to Irish independence. His service as a war artist, as was true of many others in that work, was psychologically upsetting, though his effort led to his knighthood. Orpen died age 52 after a several months stay in a nursing home. It is suggested in this book (page 43) that Orpen was suffering second-stage syphilis.

His work was uneven, some paintings being sketchy with an expressionist overtone. On the other hand, his portrait work (aside from a number of quirky self-portraits) was usually very good. This was reflected in his earnings, which in the 1920s, were on the order of a million dollars a year in 2012 money.

Orpen's works are seldom seen here in the United States. A few years ago I did come across two portraits at the Fioli Mansion on the peninsula below San Francisco. They were nicely done.

Here are some examples of his work. 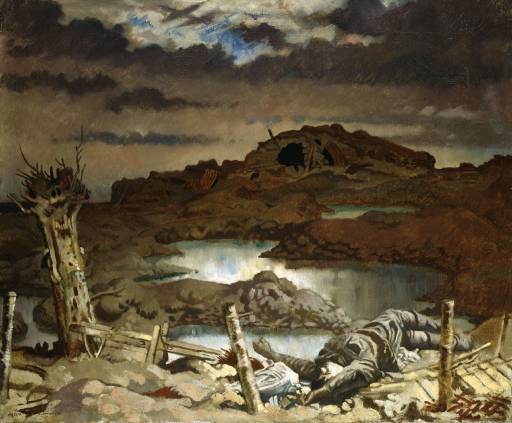 Zonnebeke - 1918
One of the paintings he did as a war artist. 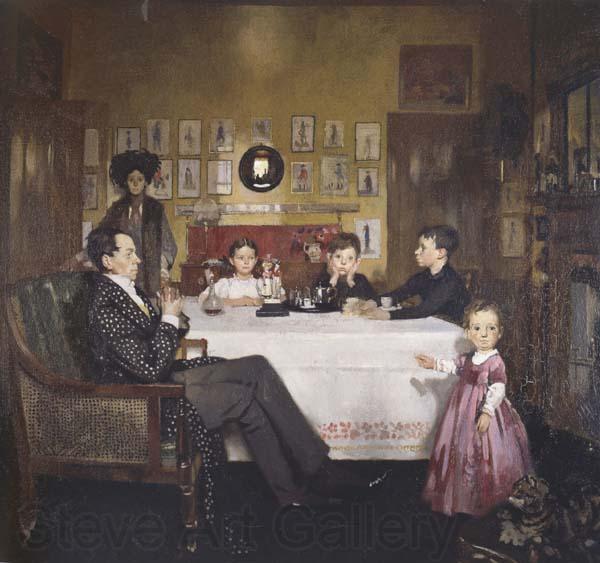 A Bloomsbury Family - 1907-09
Note the funny expressions on the faces of the children. The area on the lower right is cracking badly; click to enlarge. 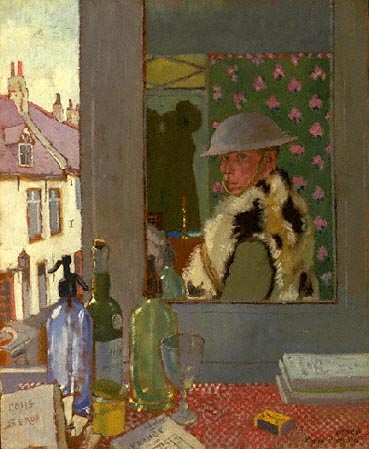 Self-Portrait - "Ready to Start" - 1917
This apparently was painted around the time Orpen was to set off for the Western Front. For some reason, although he was a master draftsman, Orpen was almost never able to depict the British helmet correctly. This is one of his better efforts. 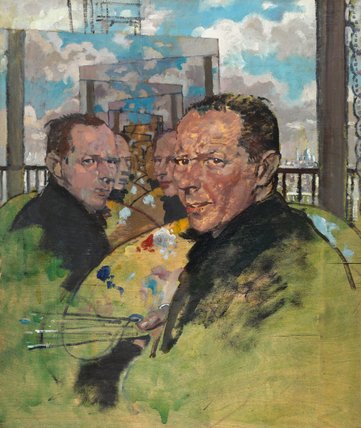 Self-Portrait - 1924
The regress of the mirror images is an interesting stunt, but I'm including this image because the palette suggests some of the paints he was using. 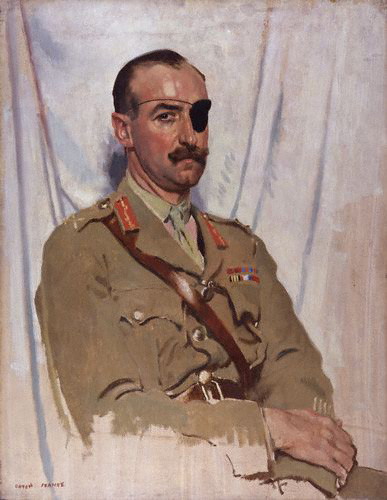 Sir Adrian Carton de Wiart - 1919
Carton de Wiart was a supremely colorful character as his Wikipedia entry indicates. He lost an eye and an arm in combat, was awarded the Victoria Cross, was a prisoner of war in Italy, represented Churchill in China and told off Mao Tse-Tung, among many other exploits. Orpen's portrait make Carton seem deceptively mild despite the small scowl. 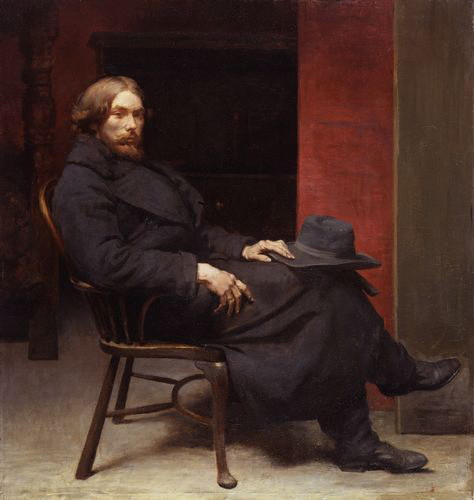 Augustus John - 1900
Born the same year as Orpen, a fellow Slade School student and equal or superior as a painter of portraits, John also out-ranked Orpen as a seducer of women. 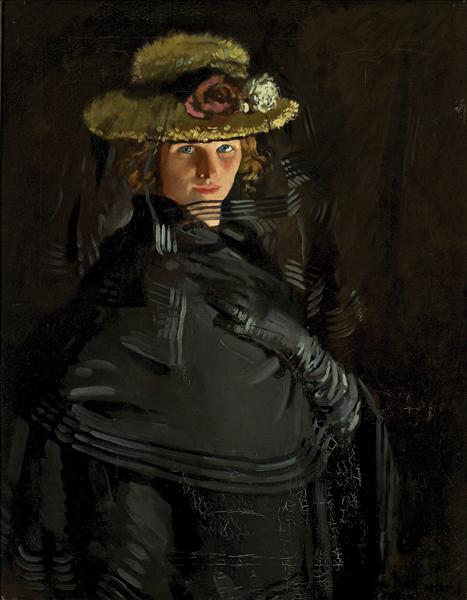 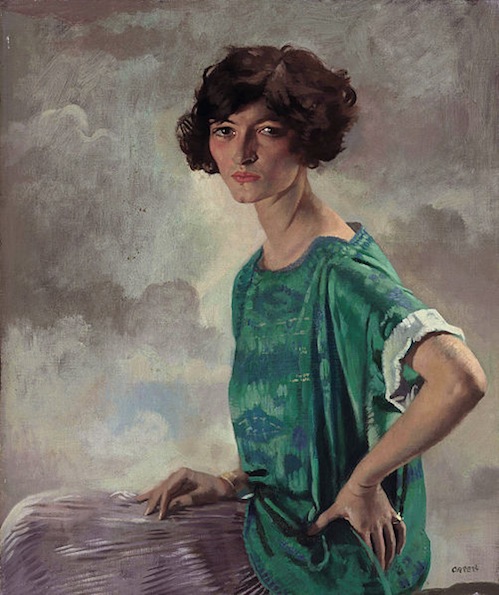 Gertrude Stanford
I'm not sure when this was painted, though the sitter's hairdo and clothing suggest the 1920s. 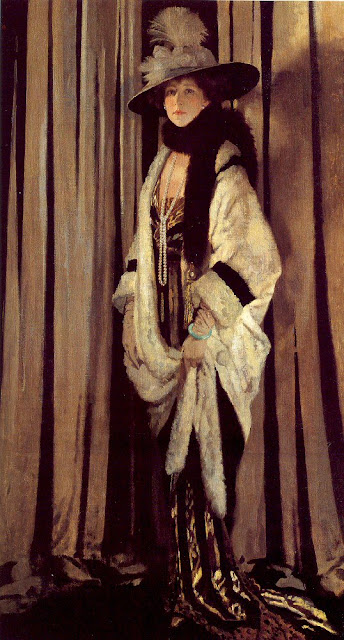 Posted by Donald Pittenger at 1:44 AM

Glad you finally got round to Orpen Donald, he is one of my favourites. There is a very good collection of his work in the National Gallery Dublin, http://tinyurl.com/c7n4l2l
last time I was there they had a room devoted to his work, When I first walked into the room I thought it was a collection of many artists his style was so diverse. He also wrote an excellent history of art “An Outline of Art”

I always think Orpen's portraits are very interesting and talented, regardless of whether they are self portraits, individuals' portraits or group portraits.

But his landscapes are difficult to look at, especially when he was so badly affected by war. (And yes I realise he was an official war artist).

Journeyman & Hels -- Glad you appreciate Orpen even though, as you both note, he's a little hard to categorize.

And thanks for the tip, Journeyman. It happens that I should be in Dublin for a few days in August and already hoped to include a visit to the National Gallery. Now I know I'll need to track down that Orpen room.

You guys may find some of my postings of interest (I have been to Orpen's House in Dublin & London).
www.facebook.com/SirWilliamOrpen
And I would welcome any contributions.
Ta,
Dominic Lee

Orpen is a very great artist, it's disgraceful how he has been marginalised since his death!