Some concept cars are intended to test public reaction to various styling ideas.  Others are thinly-disguised versions of cars scheduled for production within the next year or two.  The latter are often easily identifiable and commented upon in car buff magazines.  Readers are left to wonder which features are production-bound and which are camouflage.

It turns out that the show car conceptualizing Chrysler's iconic 2005 300C didn't have a speck of teasing to it.  People at Chrysler probably were mostly interested in exposing the public to a design that would take some getting used to, due the fact that it was a strong break from current Chrysler designs as well as from most other designs on the road.  I certainly thought the 300C was odd-looking when I saw the first photos of it.  Actually, it wasn't until I began seeing 300s on streets and highways that the design began to appeal to me; about a year later, I bought an entry-level 300.

What is odd is that the real disguised "teaser" concept car for the 300C came from Ford, not Chrysler.  Let's take a look. 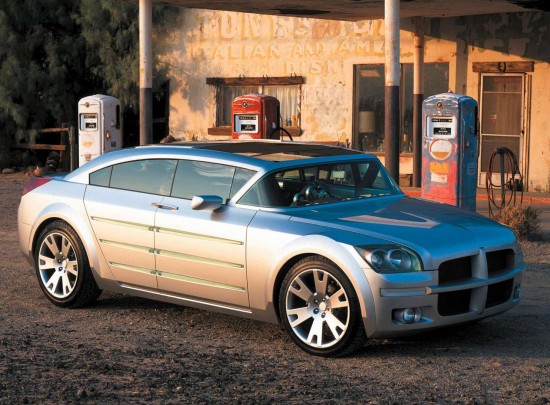 2001 Dodge Super 8 Hemi Concept Car
This concept car from Dodge contains some hints regarding the future Chrysler 300C design.  Those hints include the general brick-shape of the lower body, the fender shape (forget the grooves on the doors) and the wheel housing treatment.  Inclusion of a 1954-vintange General Motors style wraparound windshield is a cute diversion.

2003 Ford 427 Concept Car
This makes one wonder if Ford and Chrysler stylists were hanging out at the same bar in the early 2000s.  In reality, probably not.  That's because Joseph Baker, the 427's designer, was working at Ford's Irvine California studio, whereas I'm pretty sure that the 300C was styled in Detroit.  But aside from the front and rear ends, the two cars closely resemble one another.  Could the Irvine facility staff have included one or two recently hired stylists from Chrysler?
Also posted at Car Style Critic
.