There are plenty of images of the work of Edgar Maxence (1871-1954) on the Internet, but little information about him. His Wikipedia entry is here, and the French Wikipedia entry is about the same size. One possibly noteworthy fact is that he studied under Gustave Moreau, the noted Symbolist painter.

Maxence painted a good many religious scenes and a number of his other subjects were treated in a similar manner. He was a good draftsman and used other media besides oil. As best I can tell, he painted in a higher key (less darks) by the 1920s and some of his landscape paintings are loosely done. Perhaps because of the war or maybe because he had turned 70, his production seems to have fallen off drastically after 1941.

Although he occasionally depicted men, his subjects were almost always attractive young women. 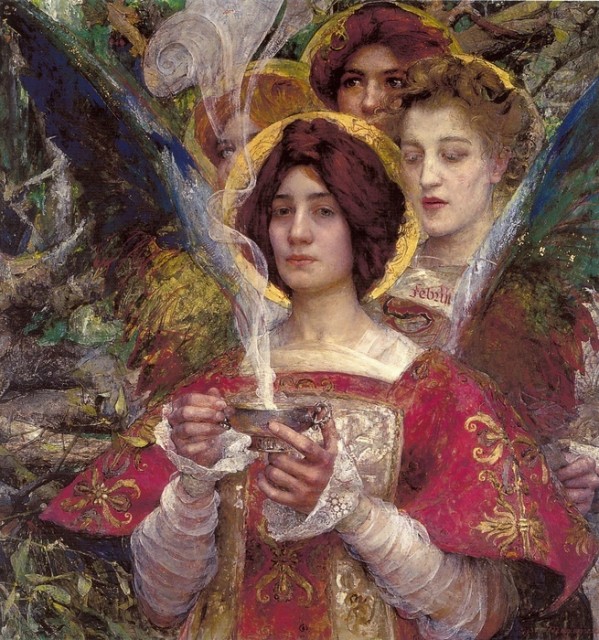 Les fleurs du lac - 1900
Note the two ladies glancing at us.  Plus the rare inclusion of male subjects. 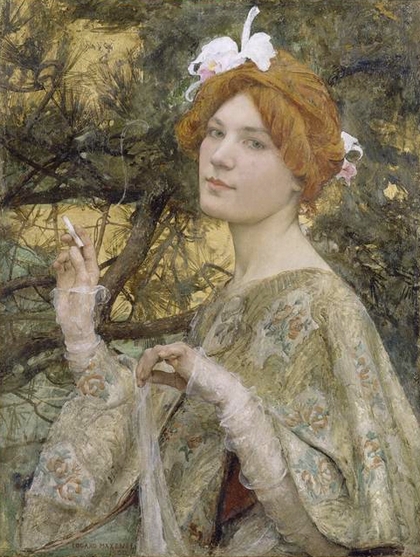 La femme à l'orchidée - 1900
Might that be a cigarette in her right hand?  Don't notice any smoke, though.  Must be unlit. 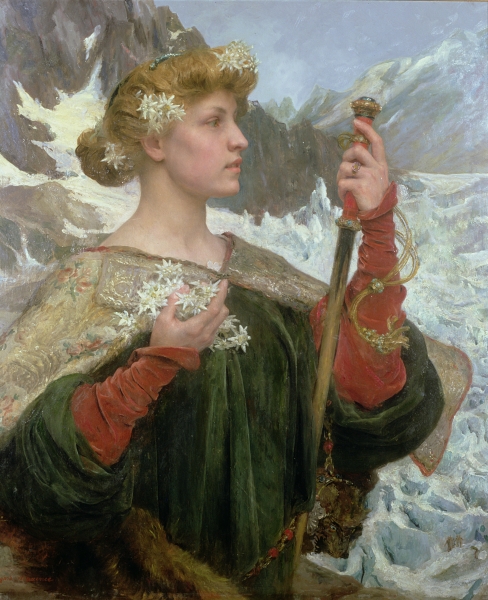 Edelweiss
Not a religious painting, and not very Symbolic, so far as I can tell (though I'm ignorant of many symbols, religious or otherwise). But, as noted above, the treatment is similar. 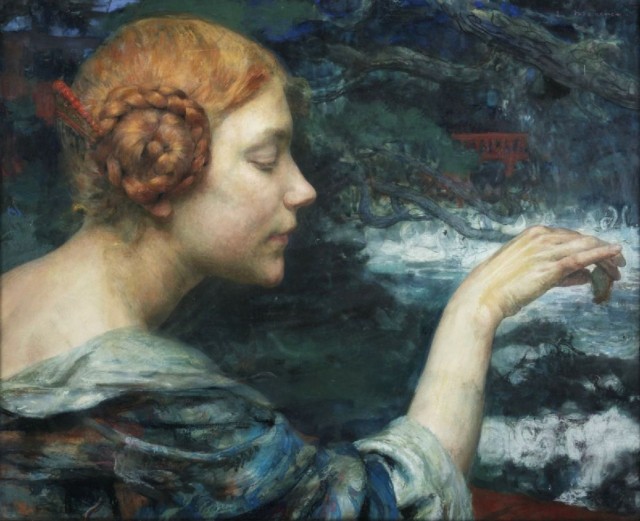 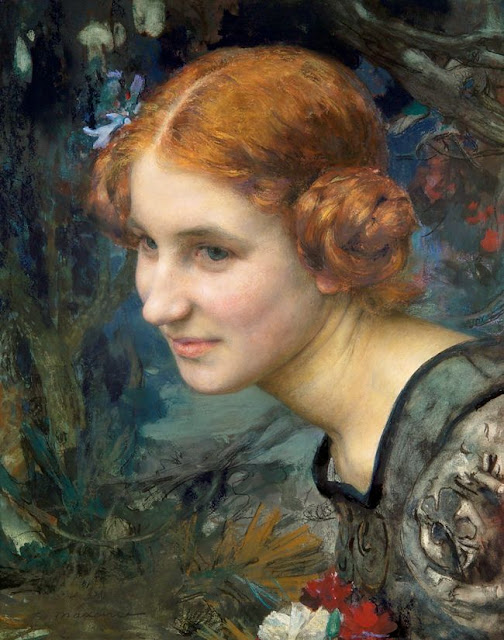 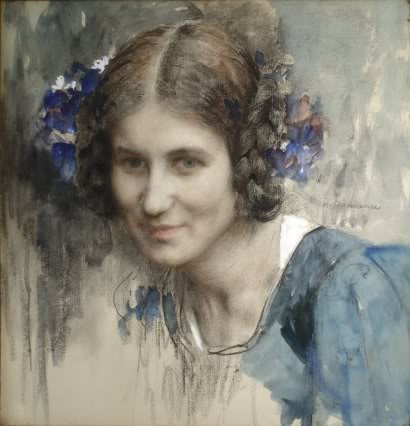 study of a young woman's head
It looks like the same model was used for these three paintings.  A caption I found on the Internet for the middle one stated that the media were watercolor, gouache and pastel.  The lower work clearly incorporates some watercolor. 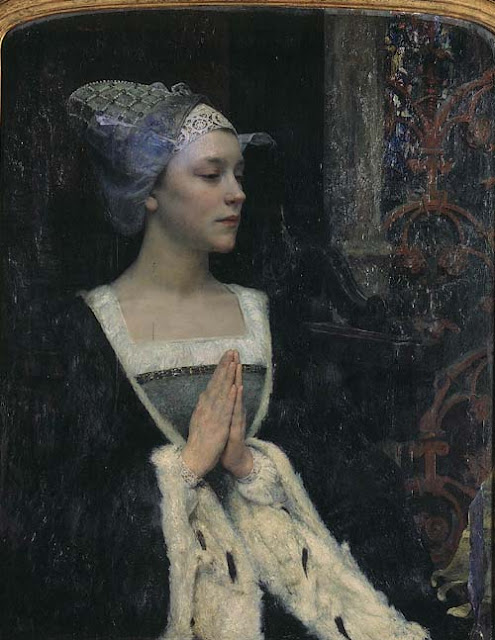 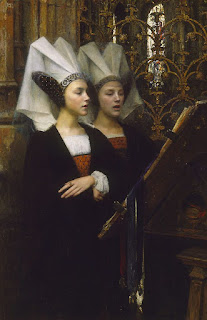 Le livre de la paix
All three women look like they were derived from the same model. 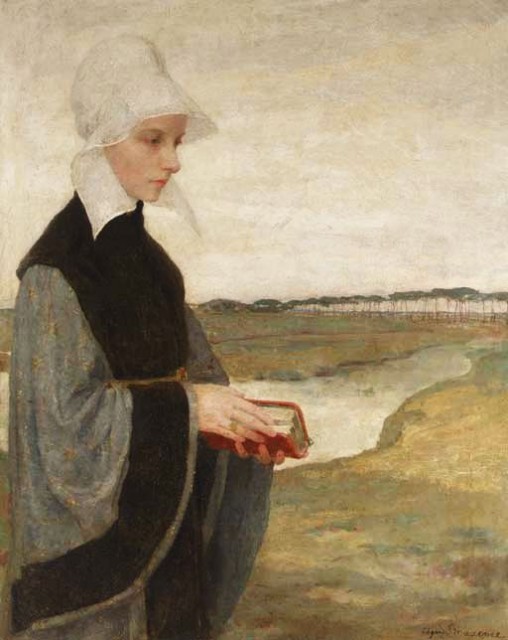 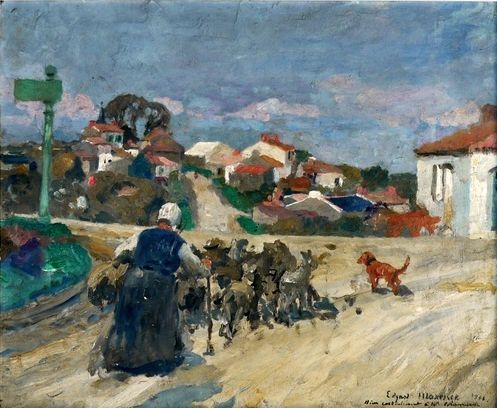 Le carrefoure de Prigny
This is dated, but I can't quite read it. Might be 1944. But it's freely done and modernist-influenced. 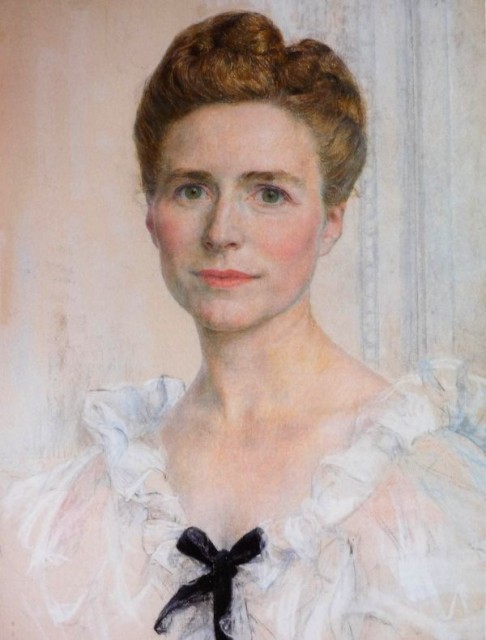 Portrait du femme - 1941
One of his later works. Its style shows a modernist influence in its simplicity, but only slightly.

The combination of style and subject matter on most of those is not remotely to my taste. I do like the last one, though. I hope that whoever commissioned it did too.

dearieme -- Yes, the paintings have a curious edge to them. Clearly, he enjoyed depicting pretty women, but felt that he needed to place them in some kind of uplifting settings. In the past, plenty of artists did exactly the same thing. One difference is, Maxence's women often seem more modern and prettier than the traditional norm.

I probably like them more than you do, but I don't like them enough to put one on a wall of our living room.

Yes, that's an unlit cigarette in her hand. It's a detail of a Job cigarette papers advert.

The cigarette is lit and smoke curls to the right and up.

...loved the way he handled the skin tones. Just charming. He must of loved showing the color changes with transparency. I bet he used some type of glazing to reach the transparency that appears.
Also very interesting that he would combine mediums on the canvas. Not your so called method of the day nor today.