Illustrator Ed Valigursky (1926-2009) originally focused his efforts on science-fiction and other speculative subjects. Eventually he drifted over to depicting aircraft and other real-life technological objects and became one of the best in that business. Unfortunately, I couldn't find many examples of his aviation art on the Internet, so what's displayed below will have to do for now.

My take on aviation art is that there are several approaches to depicting airplanes. One is the "show all the rivets" hard-edge style. I suppose this appeals to the crowd that loves seeing details. The other extreme is what I'll call the "French watercolor" approach where hardly any details are seen, and the details present are inaccurately drawn. My conjecture is that the audience for this is comprised of people who do not like or understand airplanes. Then there is a middle ground where aircraft are portrayed as they might be seen in real life at a glance, with one area in focus, others de-emphasized. A master in this was R.G. Smith who I mentioned here. Valigursky's aviation art fell in the range between the rivets school and Smith, presenting his subjects clearly and with artistic flair.

Below are examples of his aviation art along with science-fiction and other subjects as context. 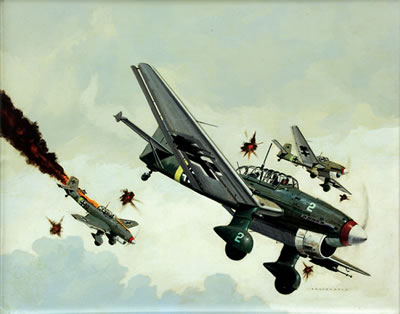 Stukas
To set the scene, here is one of his aviation paintings. 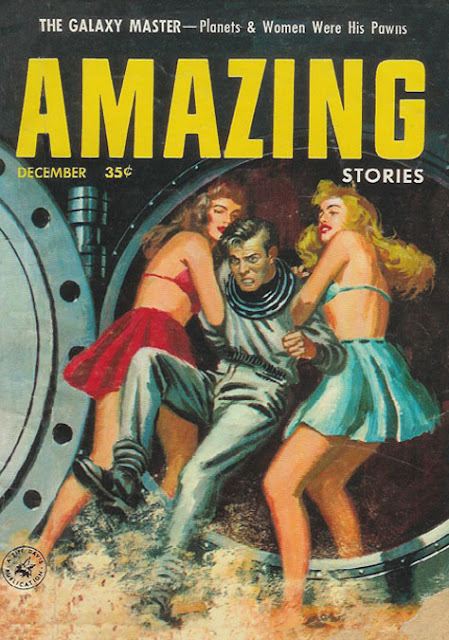 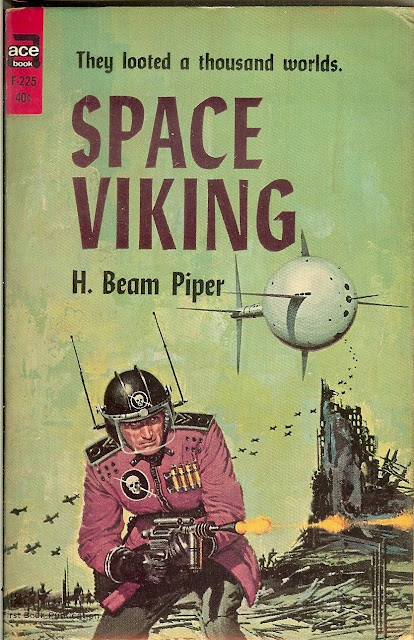 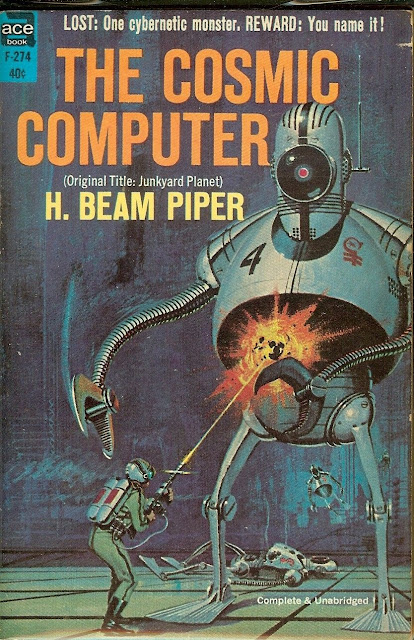 "The Cosmic Computer" cover - 1964
The two lower covers are examples of his better SciFi work. Sometimes he dashed off cover art with sad results, as can be seen in the topmost cover. 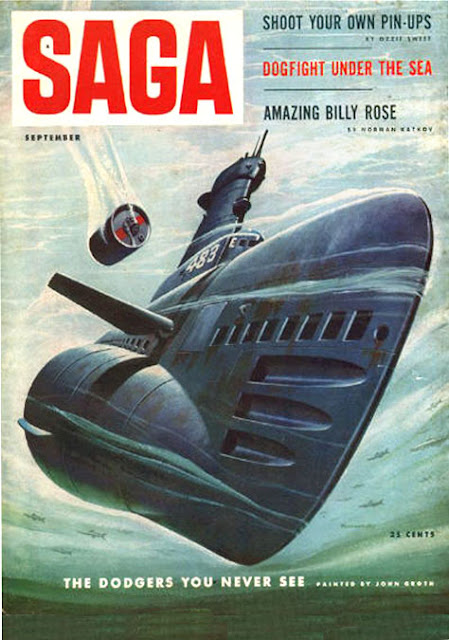 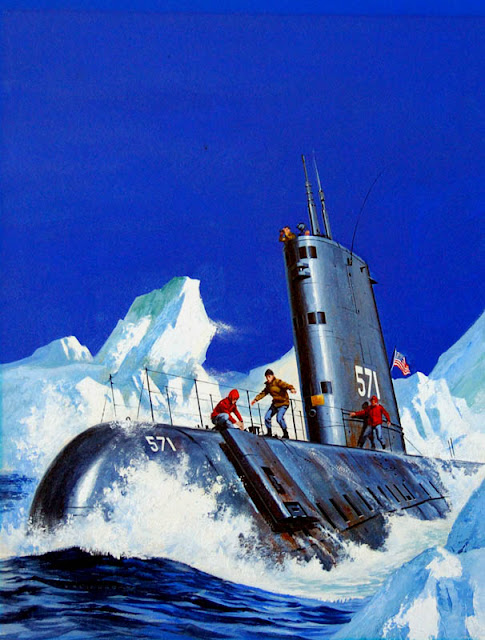 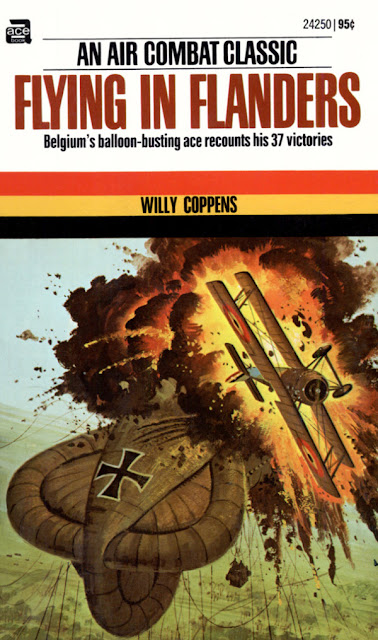 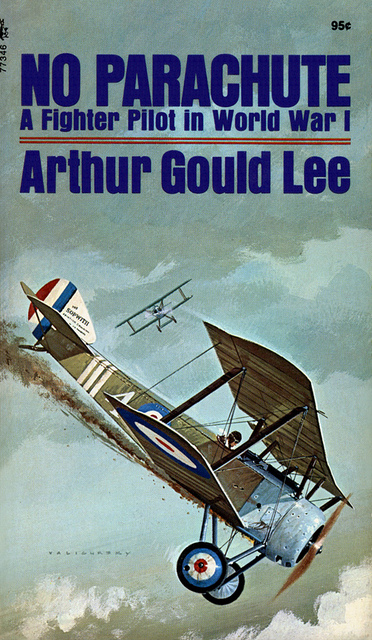 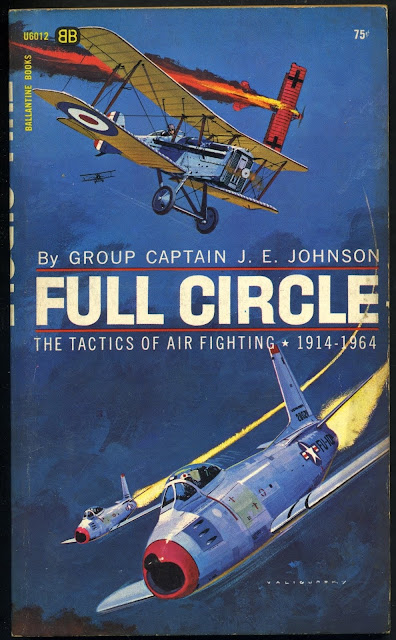 "Full Circle" cover
P-38s and Messerschmitt
More aviation art. The lower two examples are the kind of Valigursky illustrations I like best. But to nit-pick, the P-38s seem to have 1942-43 vintage U.S. markings, yet the serial number on the tail of the near aircraft has a 1944 fiscal year serial number indicating when its construction was budgeted.

But to nit-pick ... the flame doesn't contain enough smoke: that's aviation gasoline on fire, not a Bunsen burner.

I should have said that I was referring to the bottom one.

dearieme -- Good question. I've never seen a Bf109 flamed, so have no idea what this might have looked like in reality. Perhaps Valigursky was exercising artistic license for purposes of composition. Or maybe at 300+ mph, smoke couldn't form near the aircraft. Or, given that the P-38 wing man is still firing (but why? if the 109 is already blazing), perhaps the fire hasn't had time to develop (though if this were the case, why not brighter flames?)

I vote for artistic license on all counts -- even for my complaint about the insignia.

PS: We'll wave to you 8 September as we fly over England on our way to Amsterdam.

My daughter had her first trip to Amsterdam recently. Loved it. How right she is.

P.S. Beware of the ferrets.
http://www.cambridge-news.co.uk/News/Ferret-stowaway-flew-to-Cambridge-on-Hercules-aircraft-reporter-to-border-control-20130829112353.htm