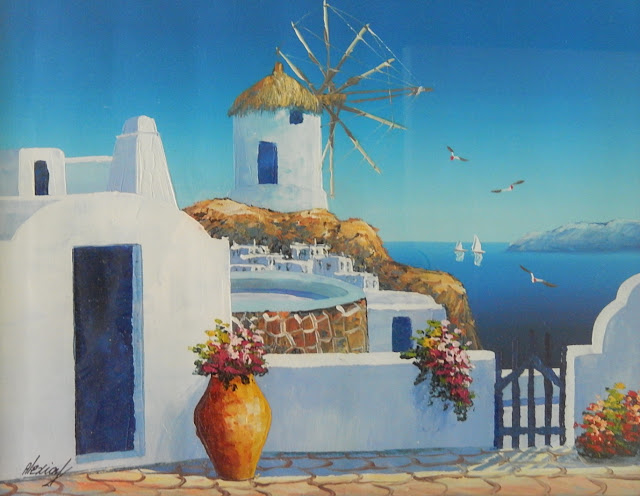 What you see here is a slightly cropped photo of an oil painting my wife bought while we were touring the Greek island of Mykonos in 2004. She loves to scoop up paintings from artists who sell their wares on the streets of places we visit. She brings them home, has them framed, and hangs them on walls all over the house. The painting shown here is in the main bathroom because its colors relate to the room's decor.

I know nothing about the artist who presumably was the man who sold the unstretched canvas to her.  And it's entirely possible the seller was simply an agent; he had perhaps a dozen or more similar canvasses draped over his arm.

Another thing I don't know is how skilled the artist actually was. Or maybe I should say "artists were" because I can't rule out the possibility that different people did different parts of the painting on something like an assembly line basis.

First, note that the sky and water are painted very smoothly. Also smooth are the gradations from lighter to darker. This is not easy to do, so I suspect some kind of professional mechanism was in place for that phase of the painting.

Other aspects are clearly primitive looking. See how huge the Mykonos style windmill is compared to the houses beneath it. In reality, Mykonos windmills are not very tall: about three storys high, according to the photo in the link.

To me the most primitive aspect of the painting other than that gross scale distortion is the treatment of light and shade.  The shadows from the picket gate and its adjoining wall suggest that the sun's direction is before us and to the right.  But there is sunlight on the wall to the right of the gate and along the nearby top, indicating that the sun is to the left and might even be a little behind us.  Clearly the real sun can't be both places at once.

Now here is the interesting part.  If sunlight and shadow were consistent, let's say it's the dominant case where it is to our right, then the gate area and the curved parts of the wall top would be shaded.  And this would hurt the composition, where the alternative lighting effects help to frame the scene.  For this reason, the painting might be more sophisticated than it seems.
Posted by Donald Pittenger at 1:00 AM

It may not be technically perfect, but it still makes me want to travel to Mykonos :)

And yeah, it makes me want to go there.