Where does one sign one's painting if it (figuratively) has no right or left edge? That's both a theoretical and practical problem when painting a diorama -- a 360-degree view.

Dioramas were popular in France during the 1870s and 1880s, and a popular diorama subject was battle scenes. One such diorama was the Panorama of Rézonville, painted in the early 1880s by the team of Édouard Detaille (1848-1912), the project leader, and Alphonse de Neuville (1835-1885), two of France's leading painters of military subjects. Events at Rézonville were selected because the French army acquitted itself better there than in most battles of the 1870 Franco-Prussian War.

I consider Neuville the better painter of the two, and wrote about him here. Regardless of their merits, the artists were faced with the task of covering an immense amount of canvas featuring many figures and objects in a limited amount of time. The inevitable result was that everything had to be dashed off with a loss of artistic merit compared to their regular easel paintings.

Once the display period for the diorama ended, parts of it were cut off and preserved. You will find a few segments in the Musée de l'Armée in Paris, near Napoléon's Tomb. Below are some snapshots I took of them while visiting the museum recently. 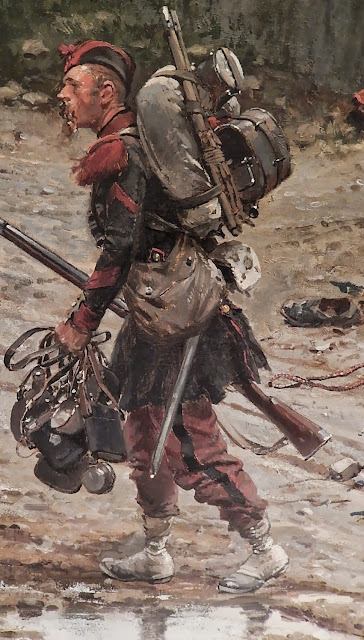 This depiction, by Detaille, I think, indicates the effect of the haste required to complete the project. Note that the boots seem too small for the rest of the soldier's body and the legs look oddly proportioned.  But I can't rule out the possibility that this was done on purpose because the center of interest of the diorama was several feet above the eye level of the spectators, and this perspective angle might have had to be accounted for. 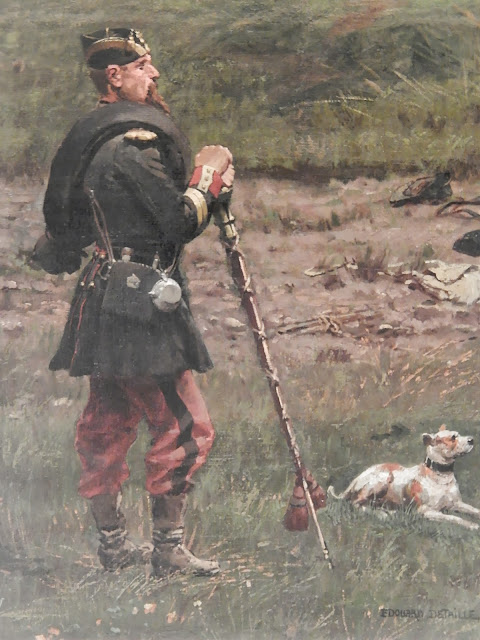 Detaille's signature can be seen at the lower right. The painters might have placed them randomly or perhaps by a segment that they had done. 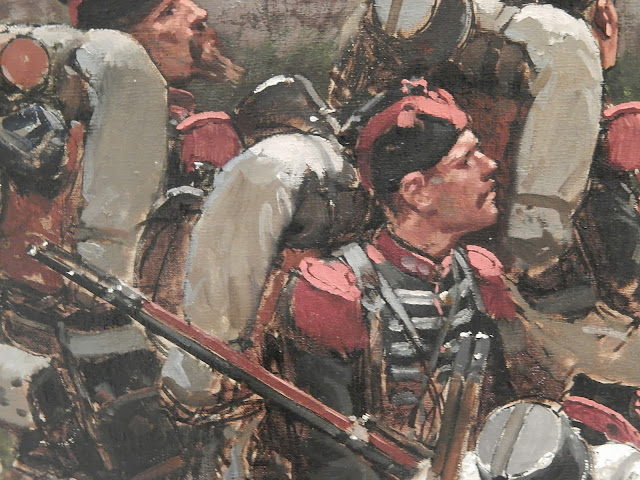 This shows the sketchiness of the painting required of the artists. 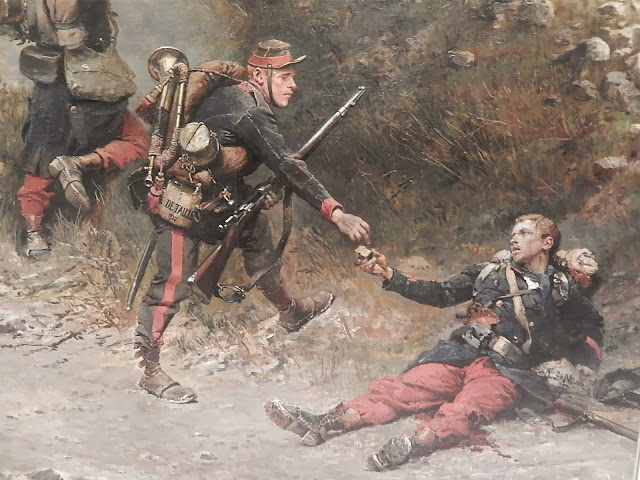 Here is where the signing gets cute. Detaille put his name on the canteen bag of the musician and Neuville placed his on the silvery object at the side of the wounded soldier (click to enlarge). I have no idea why Neuville would have selected the blessé instead of a hale subject.

The varied degree of finish in the diorama is due to selective focus, emphasis being placed on some groups of soldiers rather than others.Even with De Neuville, who was more painterly than Detaille, there was a dropping off of finish away from the center of interest.

And as for the business of where an artist signs a painting, so what?

RobertK -- As for the signing business, a blogger usually need a "hook" in the title of a post, so I did what I did. I actually do have some issues with signatures. One is illegible ones, the other is excessively large ones.

One thing I left unsaid, and probably should have mentioned, was that Neuville signed on the wounded man ... and it turned out that he was the first of the two to die.