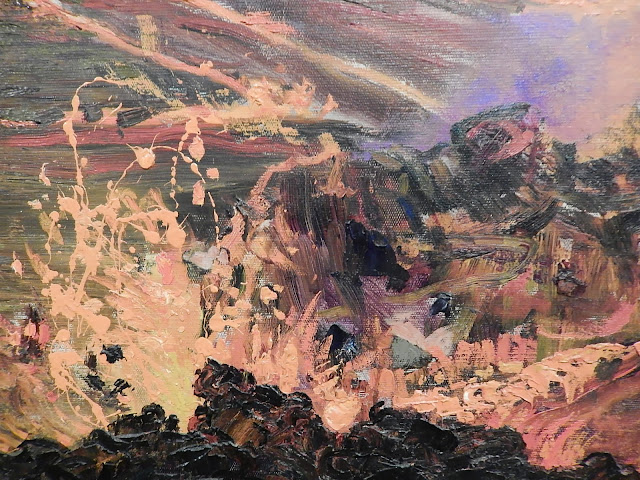 "Mount Kilauea, The House of Everlasting Fire," painted in 1917 is the upper image above, depicting the most active of the volcanoes on the island of Hawaii. The lower image is a detail photo I took when I visited the Honolulu Museum of Art in December (my camera distorted the color for some reason, but observe the brushwork and drips).

The main reason this painting caught my attention was that it was made by Ambrose Patterson (1877-1967), born in Australia to a well-connected family, art student in Paris in the early 1900s when Modernist "isms" were in full bloom, resident in Hawaii for several years, and eventually head of the art school at the University of Washington in Seattle. Biographical links are here and here.

As it happened, in college I had a watercolor class by Patterson's wife, Viola. And on one occasion, with other Senior-year art students, visited their Modernist house in Seattle's upscale Laurelhurst neighborhood and met Patterson himself.

But he was in his mid-80s while I was only 21 and grossly ignorant of things that I now know well. The fact is, I mentally dismissed him as an old geezer who it was nice to have met. Today, I would gladly schedule a whole day (or more!) with him and question him until I pumped his brain dry, getting first-hand information about art student life in Paris, the impact of Picasso, Matisse and the rest, what Nellie Melba the Australian opera singer was like, how he and other artists dealt with Modernism after the Great War (the subject of one of my e-books) and more, more, more.

As an artist, I find Patterson competent and versatile, but too willing to explore trendy ideas. As a result, he never settled into a style that was truly his, the fate of many other artists of his generation and the next. 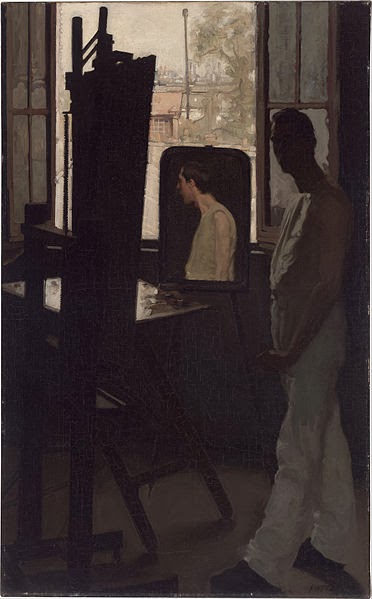 Self-Portrait (La fenêtre de l'atelier) - c. 1902
Cute idea, here. To the right is the artist in shadow, while at the center is a painting-within-a-painting showing Patterson's distinctive profile.

La bar, St Jacques, Paris - c. 1904
I like this riff on Manet's bar scene, especially the expressions on the bartender and barmaid. 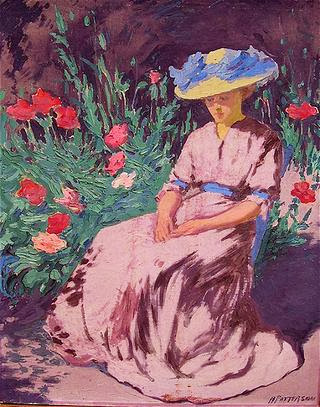 Young Woman in Garden
No date for this, but probably done before 1910. Lots of impasto and bright colors, perhaps an early experiment in Modernism. 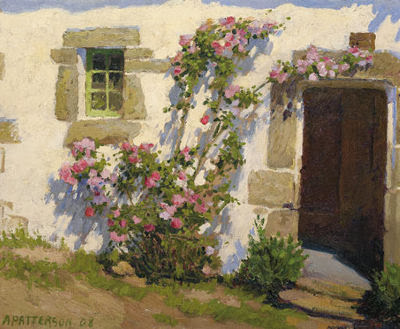 Hollyhocks - 1908
Two years later, he pulls back from Impressionism.

Mural, Mount Vernon, Washington Post Office - 1938
Even though Patterson was on the University of Washington faculty, he somehow got one of those make-work Depression era artist gigs from the government. For this mural, he had to be representational, though the style and feeling are typical of the time.

Dancers - 1947
A post-war work combining abstraction and representation. Other Seattle area artists such as Mark Tobey and Kenneth Callahan were also painting in this vein.